Things that we know:
1) There was a mysterious smell in the TV room (entertainment room?), a musty, rotty, yucky smell that we couldn't quite identify. We could only smell it from one specific spot in the room but couldn't find anything musty/rotten/yucky nearby. And if we got too far away from this one specific spot, we'd lose the scent, so we knew the smelly thing had to be near that one spot.
2) Phoebe loves to go outside and she loves putting everything in her mouth. When we go outside she mostly just wants to put things in her mouth. If there is a thing outside, she will try to put it in her mouth. Often she succeeds in putting things in her mouth. Rocks. Dirt. Leaves. Acorns. Bugs. Wood chips. She wants to taste it all. We went outside on Tuesday and she crawled around putting everything in her mouth.
3) I had just blown off our front porch/sidewalk/driveway on Monday afternoon so the kids could play with chalk. So there wasn't too much on the sidewalk for Phoebe to put in her mouth. And I sat outside on the front porch reading while she crawled about putting things in her mouth. I didn't see anything untoward (like, for example, an animal corpse or a puddle of blood right beside our front door).
4) Our gutter people came by yesterday to de-leaf-ify our roof and gutters. I'm sure it'll need to happen again before autumn is over. First they get up on the roof and blow all the leaves and branches off and then the blast the gutters clear and then they do a bit of leaf blowing around the house. They even blew off the back deck for us!
5) When they were finished they rang our doorbell to tell me so and then said, "Oh, also, there's dead chipmunk right here outside your front door. He was just under a bunch of leaves. I couldn't blow him away or nothing so..."
"Where?!" I asked, stepping outside. "Oh...right there!!!"
The little dead dude's tail was literally touching my welcome mat. See: 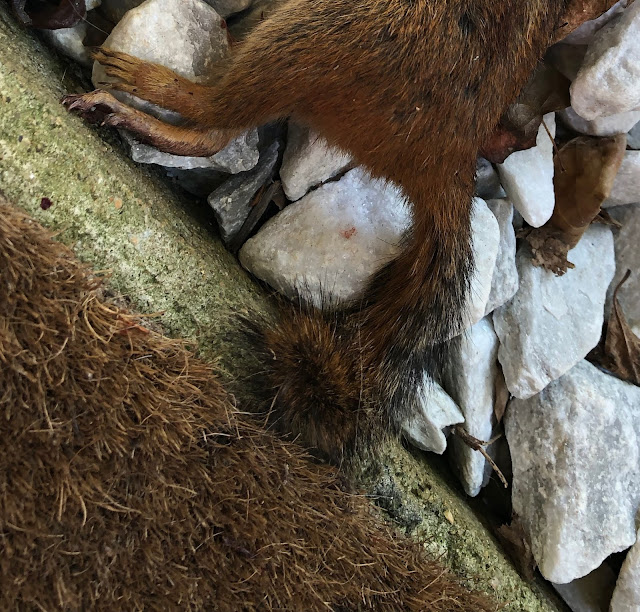 You'd think I would have noticed that. And if I didn't then surely Phoebe would have!
I ended up scooping it up with a shovel and then bleaching the blood off the concrete (more or less; it's going to get some power-washing in the near future, too). It all felt very much like a murder scene and taught me that I could never clean an actual murder scene because disposing of and cleaning up after a chipmunk was...enough.
Anyway...
6) Our TV room doesn't smell anymore.
So, our current theory is that this poor chipmunk was captured by a hawk. We have a couple of hawks that live nearby (we find their pellets sometimes; they like to hang out in the trees and on the street lamp just in our front yard) and the chipmunks aren't especially bright (remember how Benjamin caught one in an old animal cracker bin?).
This hawk then dropped the chipmunk on the roof...for some reason...who knows what hawks are thinking?
This dead chipmunk laid in the gutter...decomposing.
The smell of that made its way into our TV room.

Then the gutter guys blew this poor dead chipmunk off the roof/out of the gutter and onto the ground...right by our front door where he oozed innards onto our front porch.
And then they blew him off the front porch and into the rock garden, which is where I found him.
I don't really know whether this fits the timeline, precisely, but from the looks of the chipmunk's face...it had been dead for a while. But from the looks of its missing arm...and innards all full of buzzing wasps lapping up...you know...whatever...things were still relatively fresh. Either way it was already covered in maggots so...it couldn't have been too fresh. It didn't smell too terrible when we were examining it, but I guess with lots of fresh air about...? I also wasn't trying to breathe very much while dealing with it, so...
Who knows?
It was weird. And gross. But now it's gone and the smell is gone. So we figure the two must be related.
In a way I'm kind of glad that Andrew stopped me from cleaning out the gutters (because the gutter guys were coming in just a few days) prior to a storm hitting last week (whenever it rained last). I do that sometimes between our gutter cleaners coming (we get a lot of debris in our gutters...clearly) and somehow I don't think I would have enjoyed coming up with a fistful of dead chipmunk.
Would everyone be mad if I posted a picture of the dead chipmunk. I just think the wasps inside it were kind of cool. How about this: I will post a number of pictures of Phoebe eating random things and will tell you when to stop scrolling.
Here she is eating a clod of dirt: 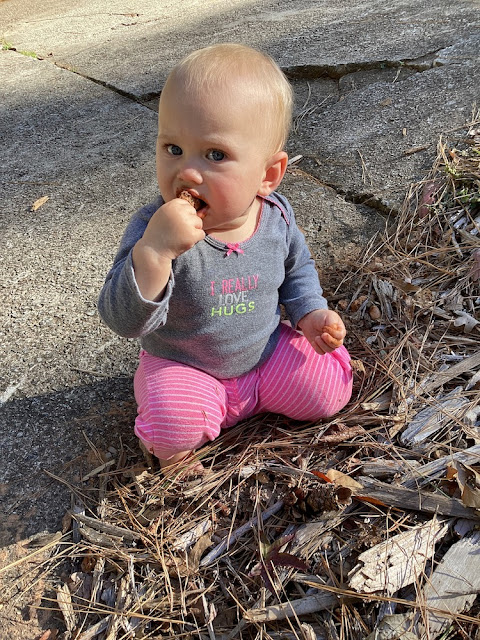 Here she is showing me what it is she's eating (she's getting good at doing that when I ask her to):

Here she is having crawled onto the wall; she's got a handful of woodchips to munch on: 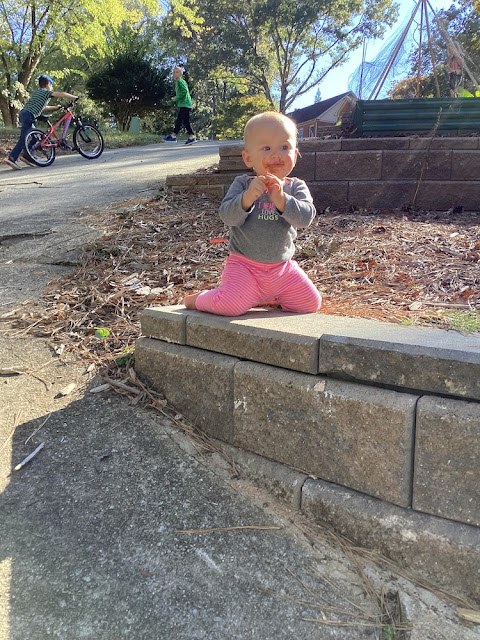 I had this imaginary conversation with her:
Me: *sits down to read one paragraph*
Phoebe: Mmm…delicious.
Me: What are you eating? Is that dirt?
Phoebe: So interesting that our planet is edible. Don’t you agree, mother?
Me: Don’t eat that! Yucky!
Phoebe: Good point. Better to eat these wood chips while balancing precariously on the garden wall.
Me: We don’t eat those either.
Phoebe: But they’re CHIPS, mother!
There are four more baby pictures before the chipmunk.
Zoë has been enjoying carting Phoebe around in the wagon lately. This is good because Phoebe enjoys being carted around in the wagon, which means I can actually relax and do some reading, rather than having to keep one eye on Phoebe (because everyone relaxes while reading academic papers, right?). 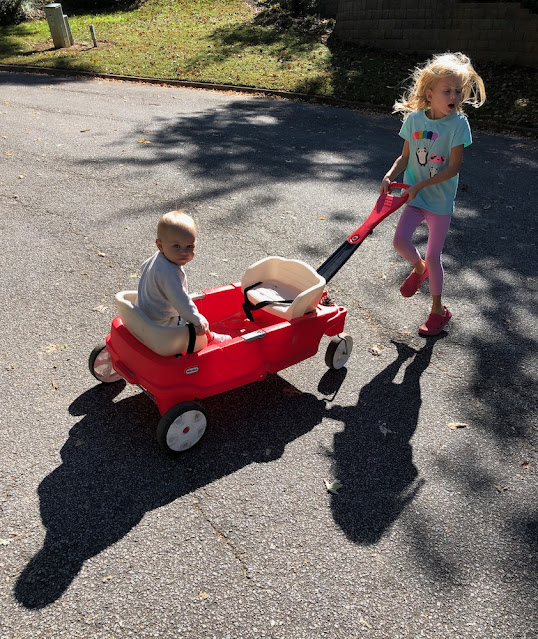 Here's another picture of those girls together: 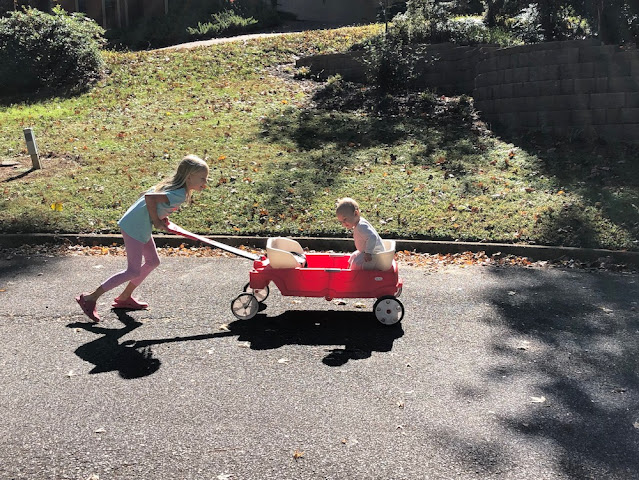 And a sweet picture of Phoebe smiling from her chariot: Have you been keeping track of how many pictures there are until the chipmunk? There's one left.
This is a picture of Phoebe having fallen asleep on our stroll around the block this evening: 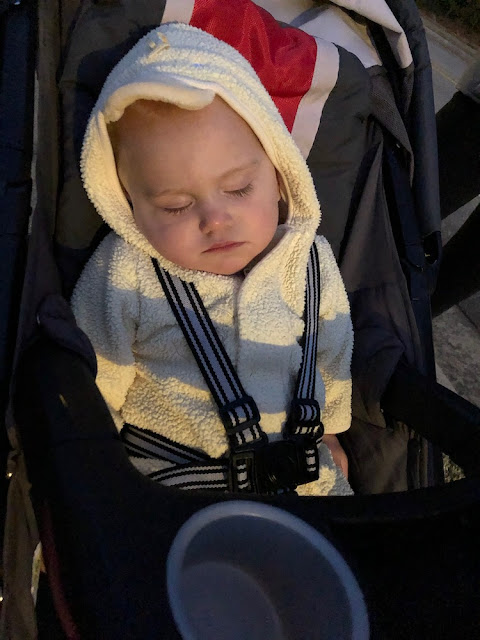 She's wearing the little ducky coat that most of my babies wore at one time or another (though not all of my babies had a chance to wear it). It's kind of nice that it's a coverall coat because Phoebe is ruining all her cute coverall outfits by crawling in them! The knees of her pants are all getting destroyed. But she refuses to even try walking.
I'm not really worried about it because she's only 11 months old (and remember Alexander?!) but it would be nice if she'd keep some of her pants nice.
My sister gave me a lovely cute outfit when we were out in Utah. I've been saving it for Phoebe's birthday and/or family pictures because I don't want Phoebe to ruin it before either of those events, you know? But she really doesn't have very many pants (because I hardly kept any when I got rid of baby things).
At this point I'm just yammering on and on because it's possible you forgot that there's going to be a picture of a dead chipmunk.
There is.
Very soon.
But I'm still talking about baby clothes for now.
I need to get together with my cousin Dylan because she said she'd hold onto some of Lola's things for me, which is so nice of her to do! Now that the weather has turned chilly (for real—we're dipping into the 30s at night!) I should maybe see about getting more than two pairs of pants for this baby.
If only my kids didn't keep getting sick.
Yes, yes. We've been sick and feverish this week again. It's never ending, I tell you.
Unlike my warnings about the chipmunk. Those are ending right about now.
Chipmunk coming in...
Three...
Two...
One...
You can see a few little rice-grains of maggots-to-be and some friendly decomposing wasps thirsty for some oozy juices. It's charming. And it was not on my porch before the gutter guys came.
I'm just saying... 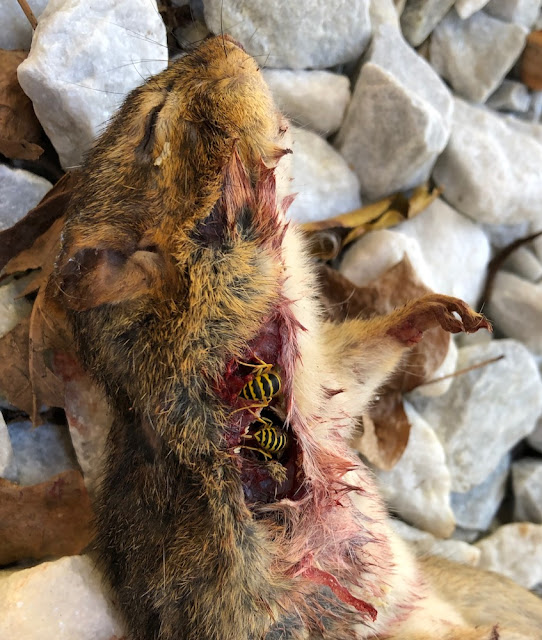