On September 7 (or so), the kids left this trap—an open animal cracker container (our summer bug-collecting jar), with a trail of acorns leading inside—hoping to catch some sort of critter. A squirrel would be ideal. The thought was that a squirrel would follow the trail of acorns into the container and then flick the lid with its tail on the way in and the lid would somehow magically spin right around the mouth of the container, thus locking the squirrel inside.
But it didn't have to be a squirrel! It could have been anything! They just wanted to catch something. 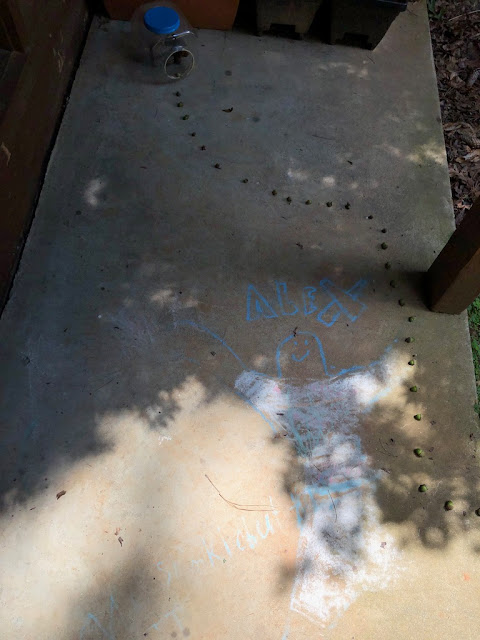 (Please also note that my front porch says "Mr. Sparklebutt" on it because this house is a house of chaos.)
Anyway, I told the kids that was a fairly elaborate plan for catching a critter but that I was fairly certain it would not work. Critters are smarter than that. They might take the bait, but they wouldn't get caught in the trap.
And day after day that trap remained disappointingly empty.
That about brings us to today...
The kids were playing outside—and I was doing some work inside while Phoebe napped—when suddenly the entire neighbourhood (or, you know, just four households of children) erupted in a cacophony of shouts.
There were shrieks. There was laughter. There was screaming. I had no idea what was going on.
"Go get Mom!" I heard above all the rest. "Somebody go get Mom!"
I was a little worried, considering Benjamin had only recently been inside with a busted lip, so I rushed outside only to find the children all huddled over a specimen in our bug-collecting jar. 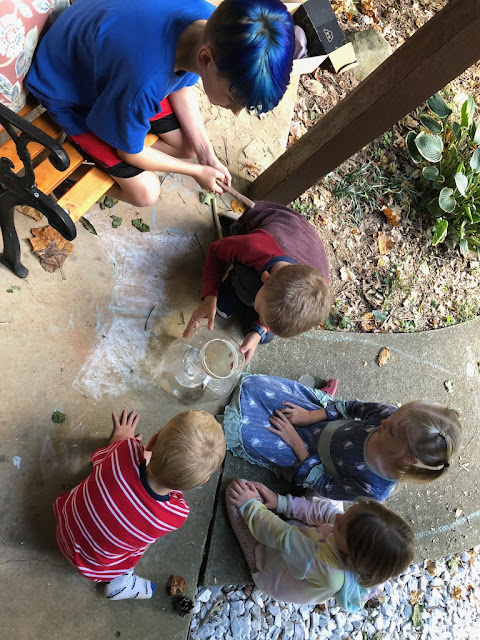 The children had caught a chipmunk in their ridiculous little trap! 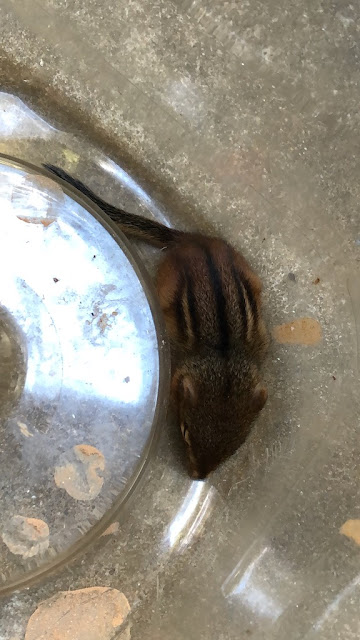 The jar has been in and out of position since they first set it up.
Sometimes they use it to hold butterflies (Benjamin had six butterflies flitting around in that jar once; he just scoops them off the zinnias with the mouth of the jar) or fireflies (specifically during firefly season, which is unfortunately over), or slugs or worms or any number of things.
But sometimes they remember their plot to catch a real critter and set it back up with a trail of acorns as bait. Today was a day they remembered they wanted to catch a critter, so they set their trap, and this silly chipmunk—Chippy, they called 'im—was interested enough in the one particular acorn inside the container (even though there are about a billion outside the container) and Benjamin swooped him right up! 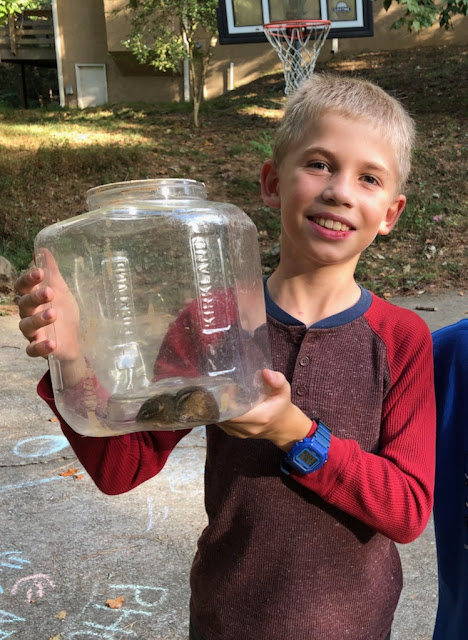 That's where tenacity gets you, I guess. The kids were elated to prove me wrong.
The children observed the frightened little chipmunk for a while and made some sketches of it before releasing it back into the wild (read: the zinnias). And now there'll be no end of trap-setting around here. I'll be slipping on acorns for months!
Posted by Nancy at 12:11 AM