We started this week with a quiet Canadian Thanksgiving dinner, made 100% by Rachel (except, I suppose, for the potatoes, which were left over from Sunday's dinner). We didn't get around to our traditional Thanksgiving FHE lesson because Miriam had a different lesson prepared already (since she taught YW/Sunday School on Sunday and in this house we recycle), but we did have an "underwear talk" focusing on giving thanks and we'll start our Thankful Tree soon...after Alexander's birthday.

Here's a picture of our Thanksgiving dinner: 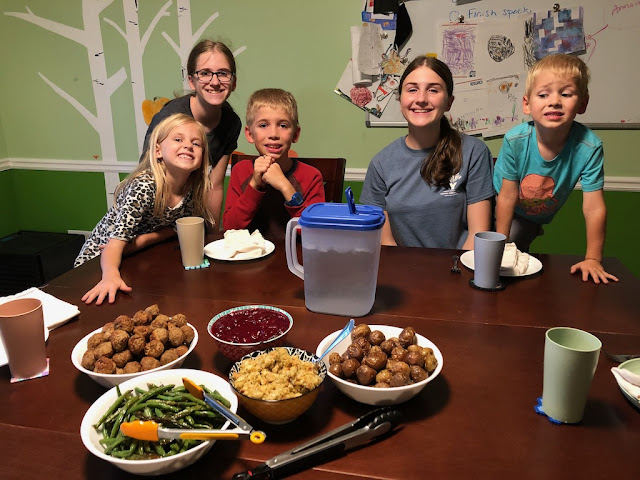 And here's a picture of the beautiful pie Rachel made: 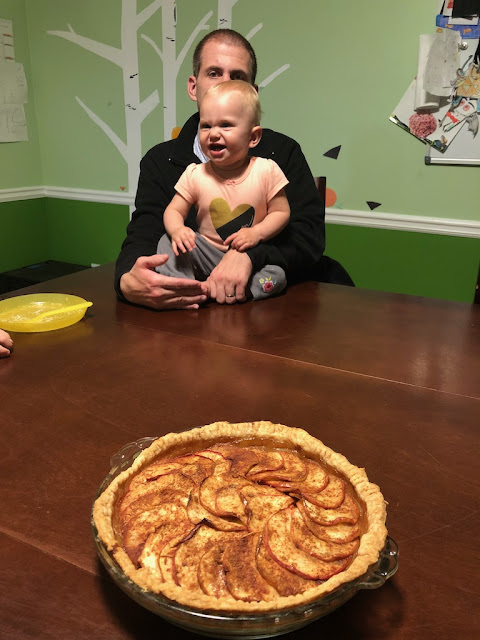 Phoebe is always so happy when Daddy gets home from work!

She is eleven months old today, which is hard to fathom, really. She's not walking yet, but she is a going concern, that's for sure and certain! She's always into everything! 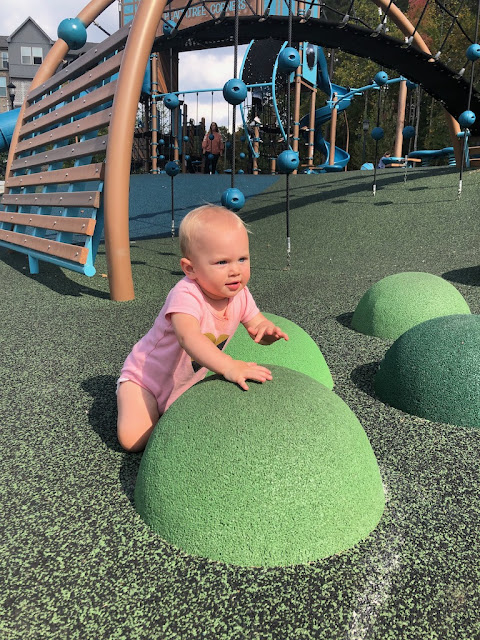 She wants to follow her big siblings around wherever they go—inside, outside, upstairs, downstairs. She can say, "Up! Up! Up!" which sometimes means "Pick me up!" and sometimes means "Let's go upstairs!" 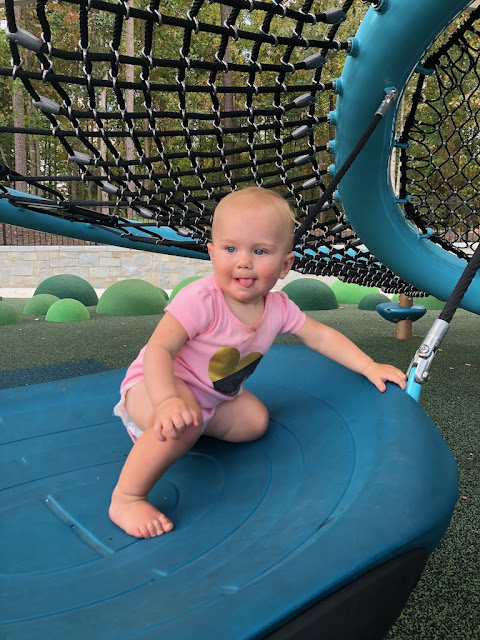 When she tries to do something too tricky and takes a little tumble, she lets out an angry little growl. 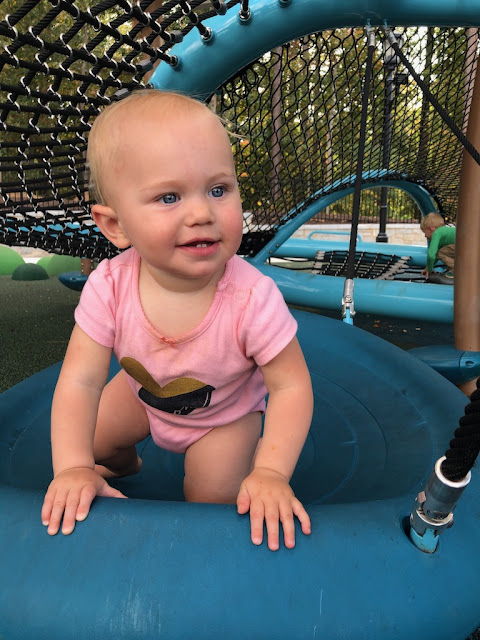 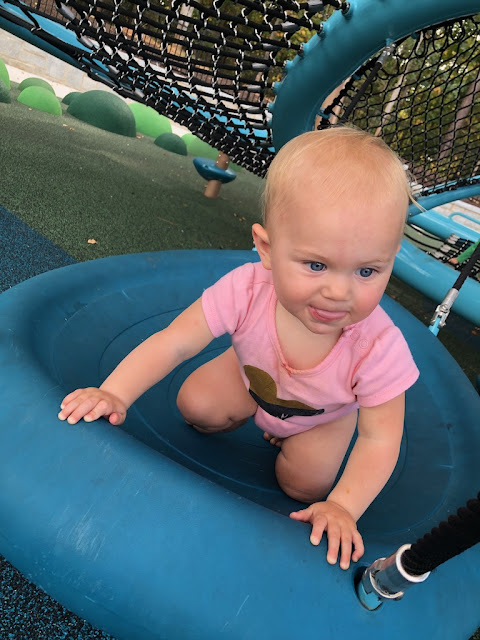 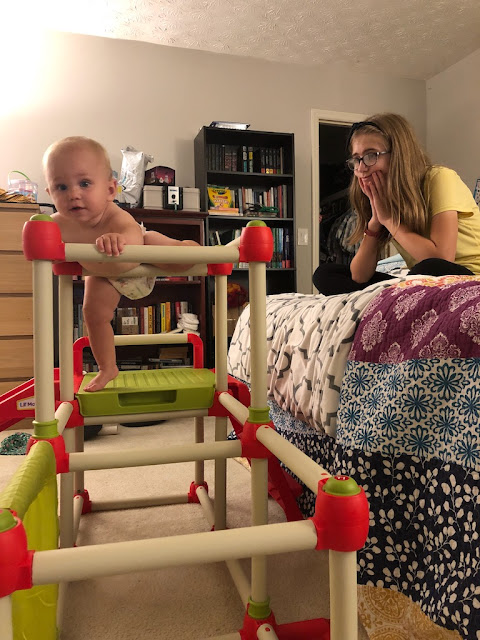 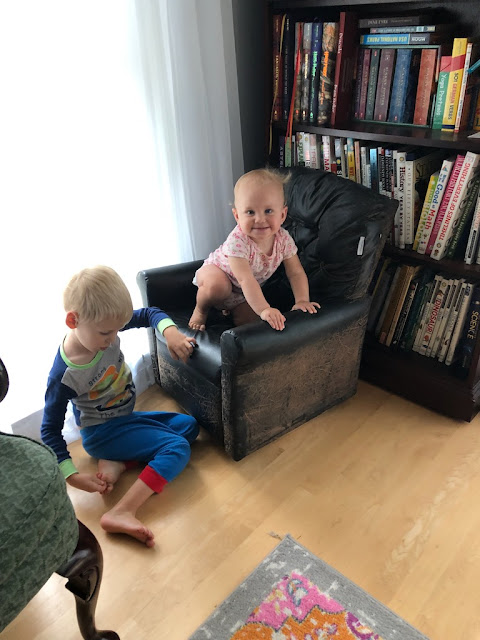 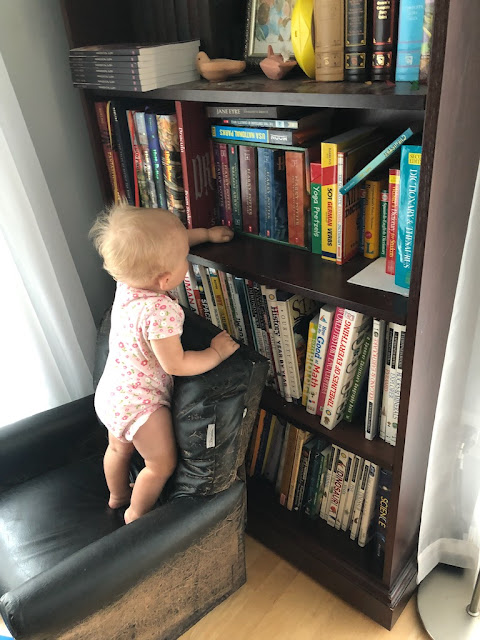 And books are one of her favourite things to get into. She really enjoys opening them up and letting the pages flutter through her fingertips. She's not so interested in story time or board books (unless she decides she wants to flip through one), but she loves to get her hands on a good paperback novel and just flip through the pages.
Another favourite thing of hers is getting into produce. Potatoes, tomatoes, mangoes, apples, onions...she's not terribly picky. If she can reach it, she eats it. If she can't reach it, she finds a way to reach it. This morning she ripped open an apple box.
Fortunately by the time we caught her she'd only managed to take a bite out of a couple apples. 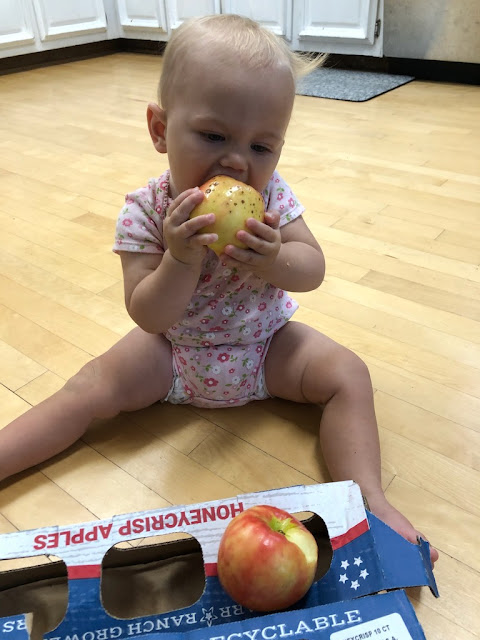 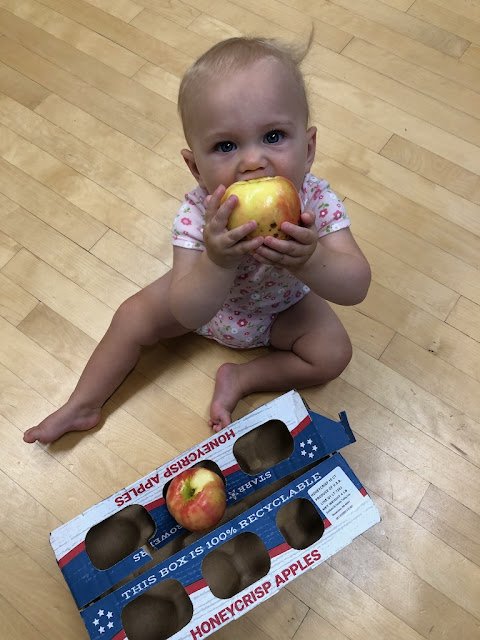 She still only has two teeth, but she's really committed to munching apples. 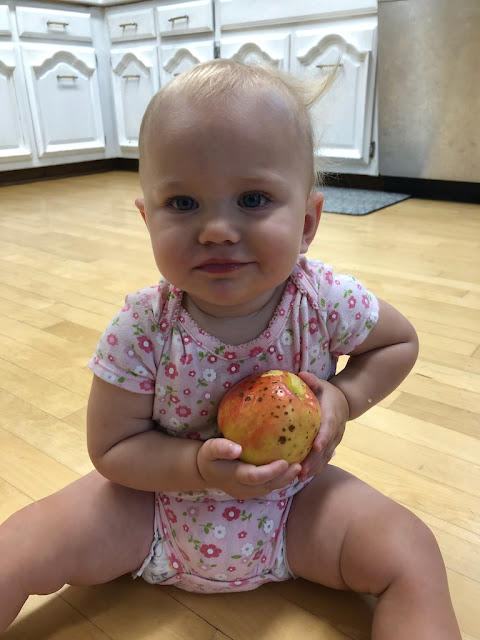 She also had spectacular bedhead this morning—which my mom pointed out highlights how long her hair is getting. She still doesn't have much hair, but it is growing! 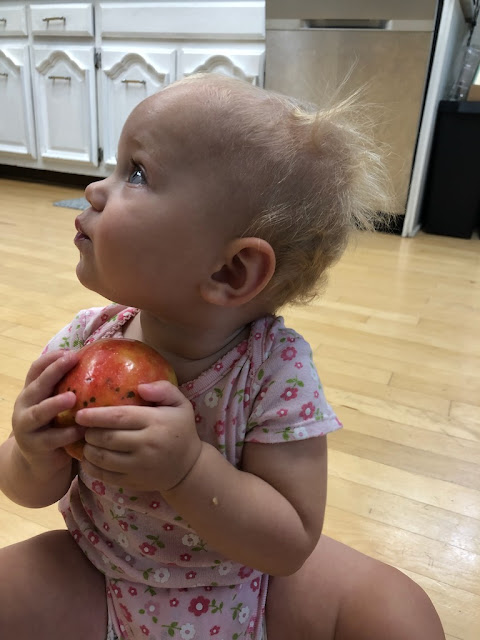 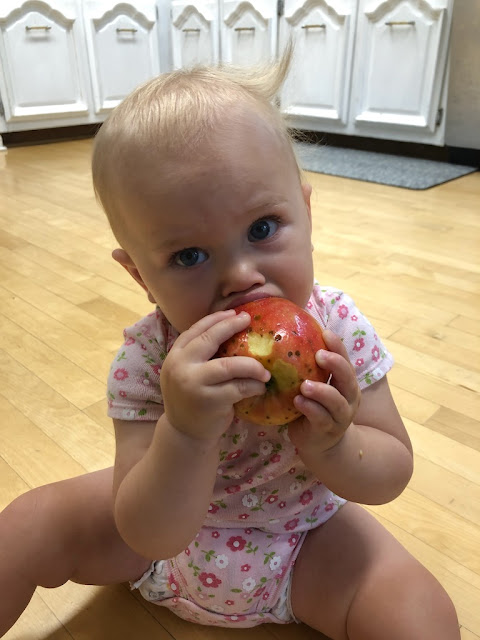 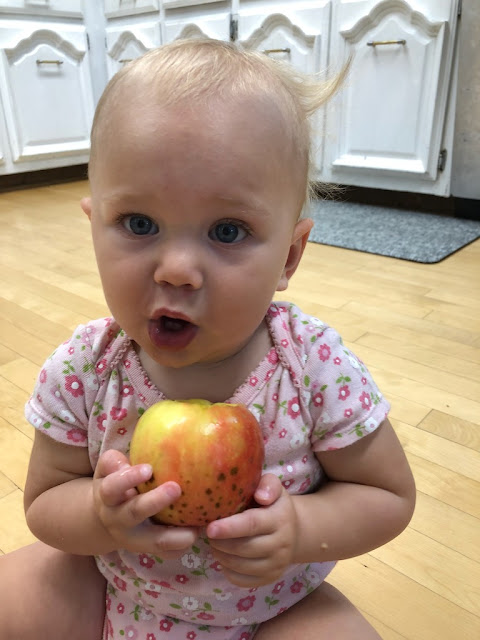 Look how hard she's working to sink her teeth into that thing! 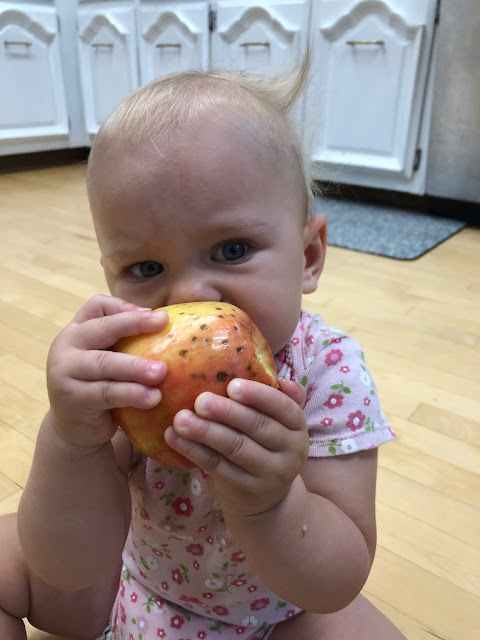 In other news, Zoë was running a fever last night and this morning so she spent a considerable amount of time hanging out in her room alone today—doing her math work, working on a story, and, evidently, staring out her window. 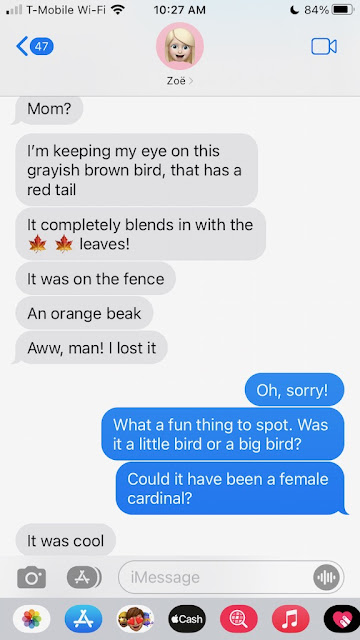 "Mom? I'm keeping my eye on this grayish brown bird, that has a red tail. It completely blends in with the leaves! It was on the fence. And an orange beak! Aww, man! I lost it!" she texted to me.
"Oh, sorry!" I texted back. "What a fun thing to spot. Was it a little bird or a big bird? Could it have been a female cardinal?"
"I don't know if it's a female or a male. Small bird."
I love how she just essentially was like, "How should I know?!" But I was in the process of sending her an identification link so she soon found out that it did indeed look like a female cardinal. 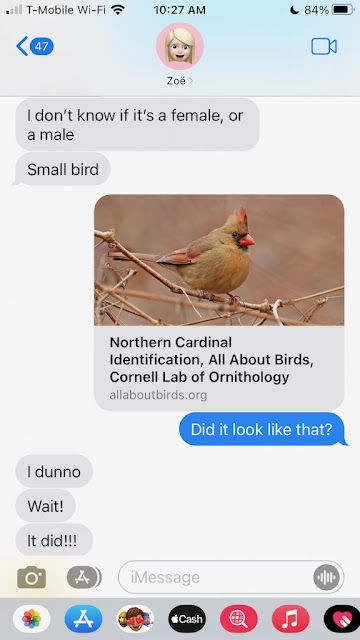 We see males all the time, but the females are (by design) more difficult to spot. But she was very observant and did an excellent job describing it. We went on to talk about why they're different colours and why sometimes birds seem fatter than they do at other times (hint: they fluff out their feathers in the cold to trap more warm air against their wee little bodies).
The kids are very familiar with my penchant for identifying things so they often ask me to identify various bugs and birds and things that they've found. They literally dragged me up the street to identify some bugs in the neighbour's yard the other day. They'd promised said neighbour that their mom could tell him what kind of bugs was taking over his yard. False milkweed beetle. So they weren't wrong that I could help identify the bug (though I did cheat and use an app to help me).
Posted by Nancy at 11:17 PM