In case you'd forgotten, Phoebe and I flew out to Utah about a month ago for an "epic" (according to Zoë) "Mom-and-Phoebe" trip (she was a little bit bitter she didn't get to come along and wrote Naanii a letter expressing her disappointment). 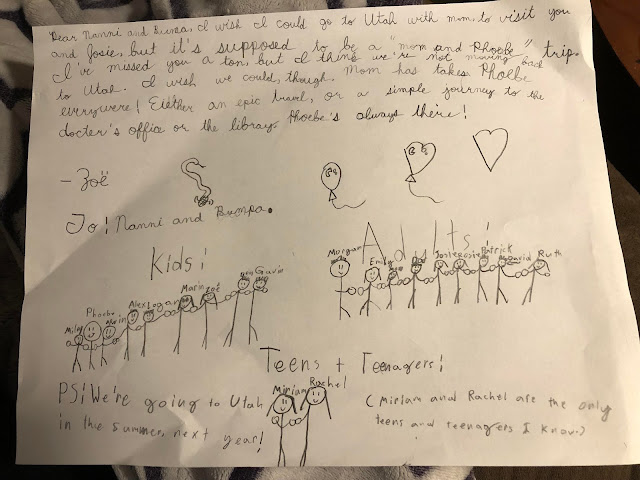 She says "I wish I could go to Utah with Mom to visit you and Josie, but it's supposed to b a "mom and Phoebe" trip. I've missed you a ton, but I think we're not moving back to Utah. I wish we could, though. Mom has taken Phoebe everywhere! Either an epic travel, or a simple journey to the doctor's office or the library, PHoebe's always there!"

In Zoë's defense, Phoebe is rather attached to me at the present.

In Phoebe's defense, she's never entered the library. So there's that.

Anyway, it's high time I shared some Utah highlights, don't you think? I spent a lot of time relaxing, a lot of time visiting, and quite a bit of time writing and studying and sleeping. And that's probably just as it should be.

Jacob and Shayla had me over for dinner one of the nights I was there. Jacob is quite the chef and made some wonderful chicken. Shayla and I had fun talking about books (what else?) while Carter and Dean entertained us (especially Phoebe) with their antics. It was fun to see Phoebe with her little cousins. 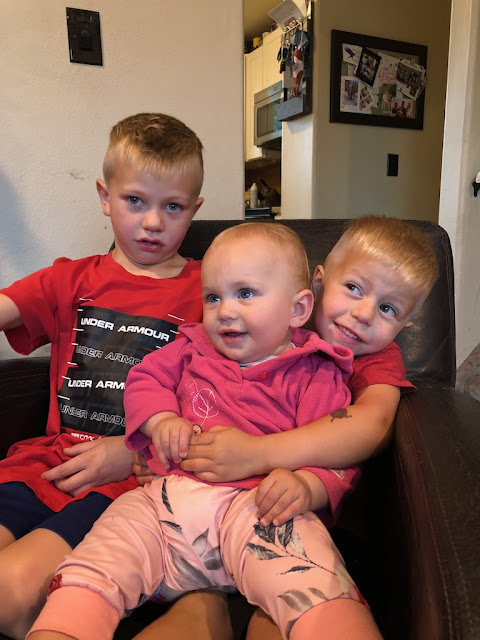 And here she is with Jacob and Shayla, respectively: 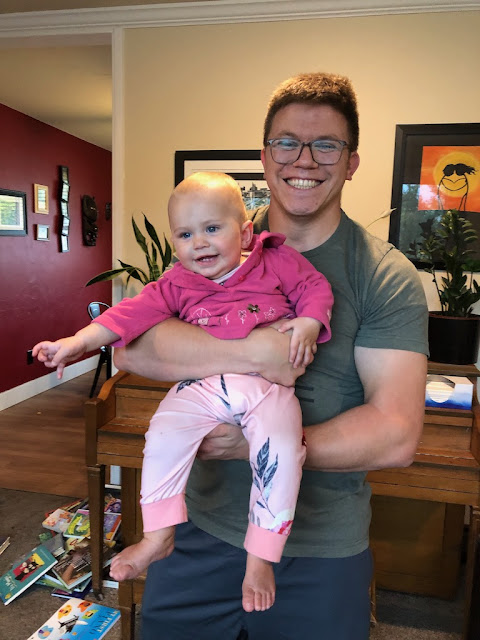 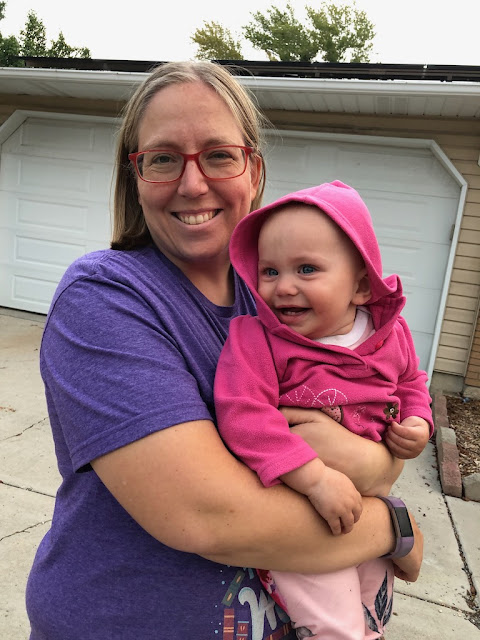 She wasn't sure about being held by either Jacob or Shayla, but she also found her cousins too hilarious to care that she was being held by strangers. Those boys bounced around so much and she currently finds jumping just too funny.

On another day I had quite a busy schedule, heading down to Spanish Fork to visit Aunt Linda and Uncle Trevor (who had just been made new grandparents the day before): 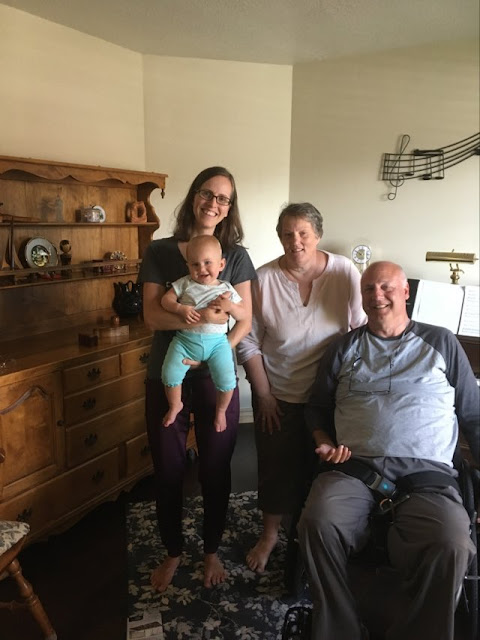 And then heading back up to Provo to meet up with friends at a park near my parents' house. I didn't do a lot of advertising in advance about my trip because my main goal was family time, but it was nice to catch up with a few friends. I saw my friend Kathleen (from Durham who lives in Provo now) coaching soccer practice, and then my friends Joy and Marquita (from high school) showed up. 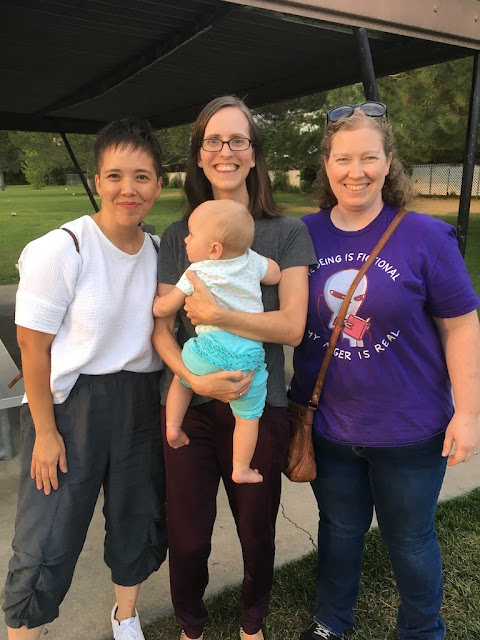 They're both doing such awesome things! Joy works for Brandon Sanderson and Marquita is going back to school to get some prerequisites out of the way before pursuing a master's degree in clinical psychology (I believe). Marquita's oldest is a senior, while Joy's oldest is a junior, and my oldest is a sophomore. Marquita's youngest just started full-day school and Joy's youngest has been in school for a few years now. And I'm...a few years behind them since obviously Phoebe has a few years until she'll be in school...and also...I'm homeschooling my kids...so...that makes balancing non-kid life trickier. But that's okay.

It was so fun to see these ladies and get caught up on everything that's happened since we met each other 22 years ago. Somehow it feels like no time—and yet all the time—has elapsed since then. But now we have kids the ages we were when we met so...clearly the first answer is correct: and a lot of time has elapsed since then.

My author-friend James Goldberg also dropped by the park to visit. When I posted on Facebook that all my "Utah Friends" were invited to meet me at the park, he messaged to ask if he was included, even though technically we've never met. We have, however, been internet friends for years and years and we read each other's poetry (and, in the case of James, novels). He even brought along a copy of my book to have me sign it! 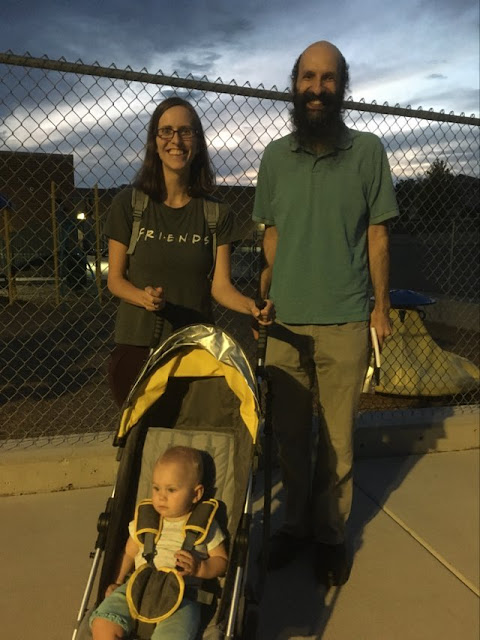 He also knows my mom from when she was taking Hindi at BYU, and it just so happened that she showed up at the park just as Joy and Marquita were leaving and shortly before James arrived. So James and my mom were able to get caught up and James and I got to formally meet and Phoebe got to crawl around and eat stuff off of the ground while James' kids played on the playground equipment.
It worked out perfectly!
The next day I met up with a few people who'd missed the evening before. My friend Lauren (from our days in Stonewood, our first apartment) to see me and also to meet my cousin Ash and Auntie Judy. 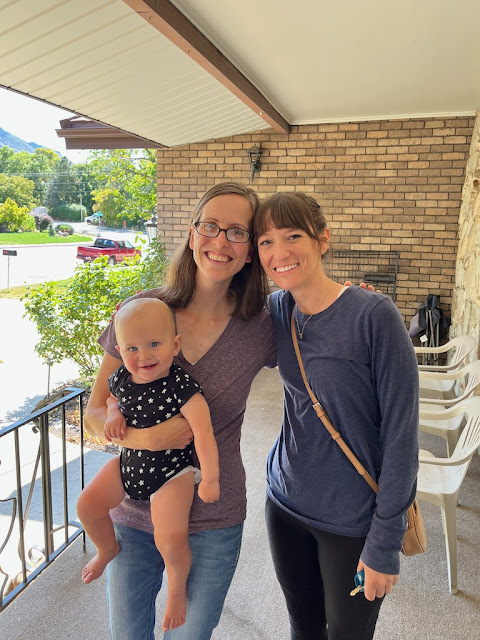 Lauren has a transgender daughter and I thought it might be nice for her to have the ear of people navigating a similar path. I hope it was helpful for her. Ash was so sweet about it. Here we are on the couch together—black, purple, black, purple—Ash, Judy, Phoebe, and me: 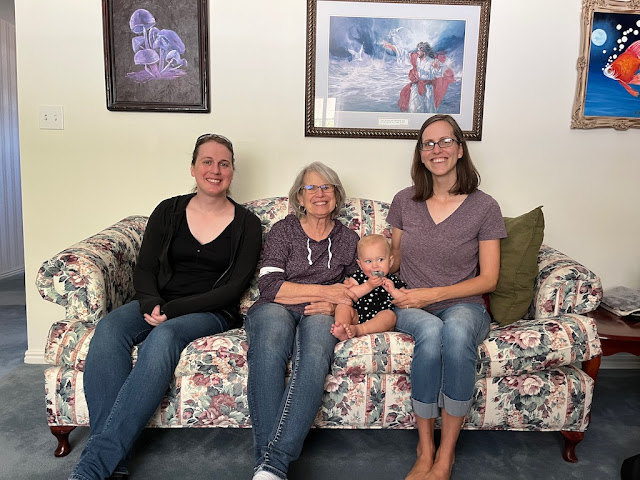 And here we are with Auntie Josie and Uncle Patrick thrown in as well: 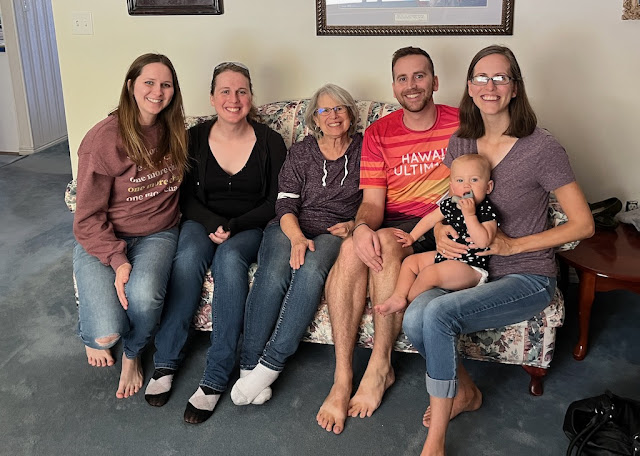 It was so lovely for me to be surrounded by so many familiar faces (while Phoebe spent the week being terrified of what she considered to be strange faces).
Posted by Nancy at 1:07 AM