Having only recently been home to a chipmunk, our ol' cookie container soon found itself habitat to a number of jorō spiders—eleven, to be precise. Benjamin went around snatching them out of their webs and filled this jar: 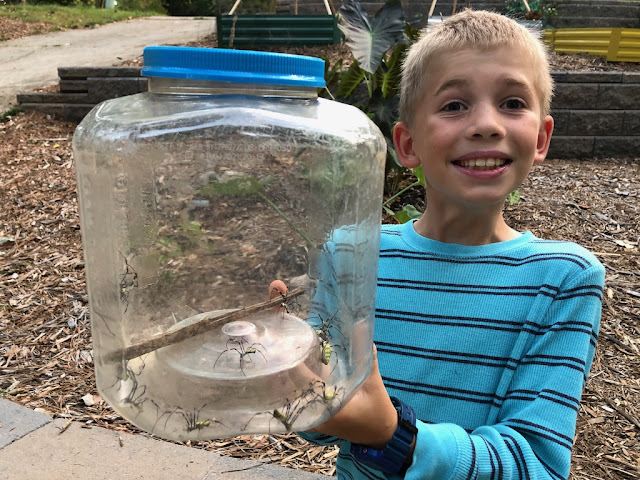 They're not very aggressive...toward humans...nor are they particularly venomous...for humans...but they were clearly uncomfortable being in such close quarters. It's not unusual to see multiple spiders in a tree, but each usually has its own web. We learned they're rather particular about that...

Here they are all skittery-jittering around the jar, occasionally running into each other and seeming to fight a bit: 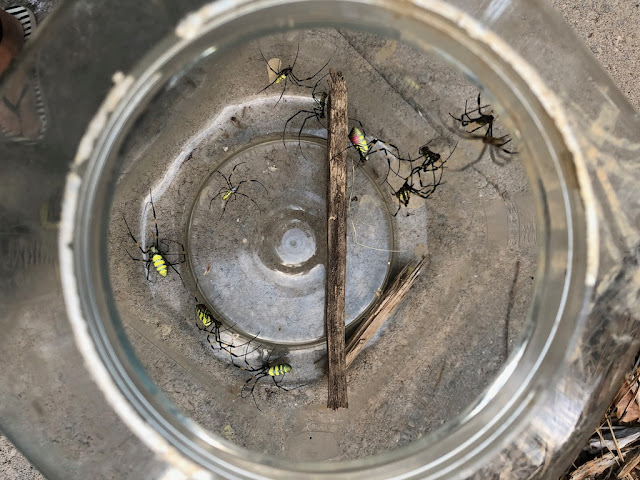 Watching them was a little unnerving because, as far as spiders go, these things are massive. 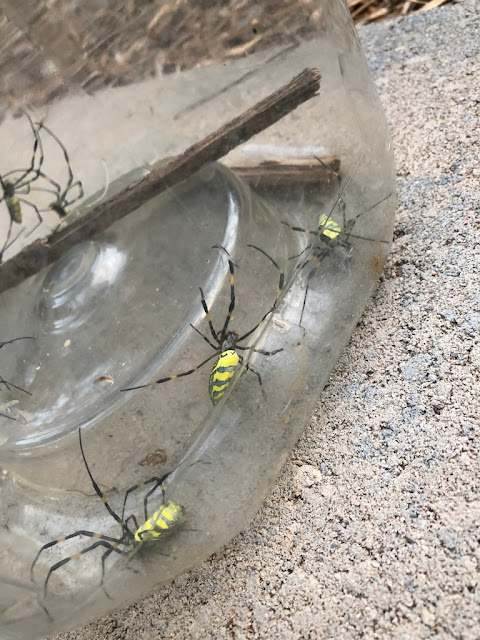 Benjamin left them on our porch overnight and when we checked on them in the morning there was only one spider left standing—and that one only had six legs left! The spiders had literally torn each other apart overnight. You could see bits of spiders all over the jar—abdomens rolled around pell-mell while legs simply littered the ground. Several spiders had been sucked completely dry. The carnage was astounding. 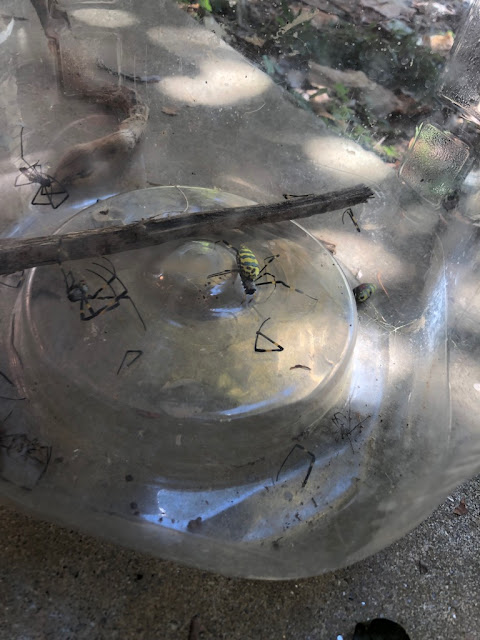 So obviously while they're not particularly aggressive toward humans, they do tend to be a teensy bit on the territorial side. Evidently.

We still have a few spiders sitting on our front porch—new ones that Benjamin has collected—but these he's keeping in separate jars so they don't got all Lord of the Flies on him.

In other news, the kids went exploring in the back-backyard this afternoon and returned carrying armfuls of bones. They'd stumbled upon what was once a deer and now they're determined to piece together the entire skeleton. There are still more bones in the woods (even after going back for a second load this afternoon) so they're hoping to get back there again in the near future.

For now I just have, like, six gallon-size ziplock bags full of deer bones in my house. 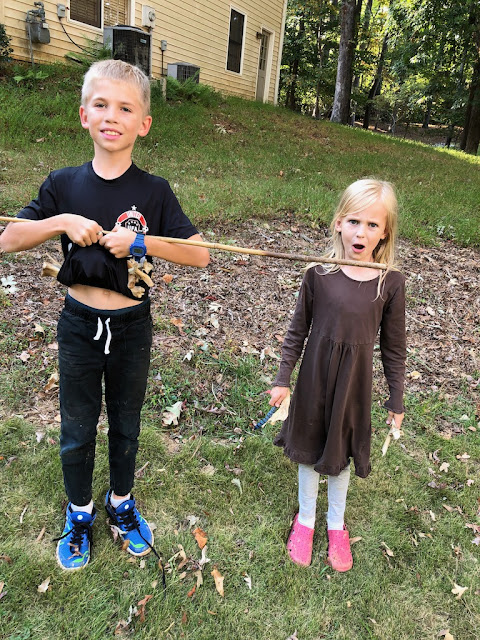 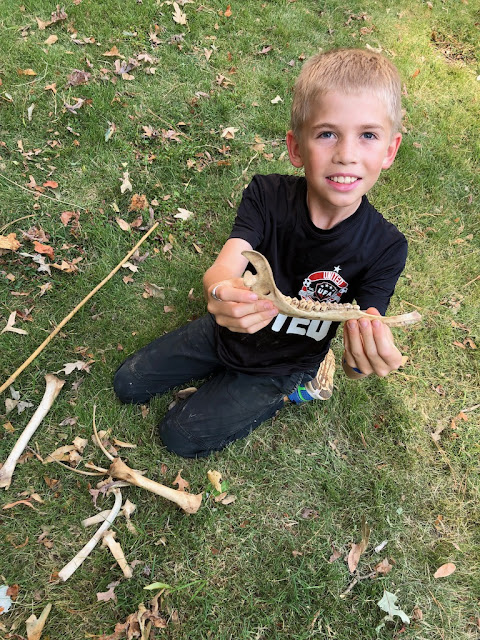 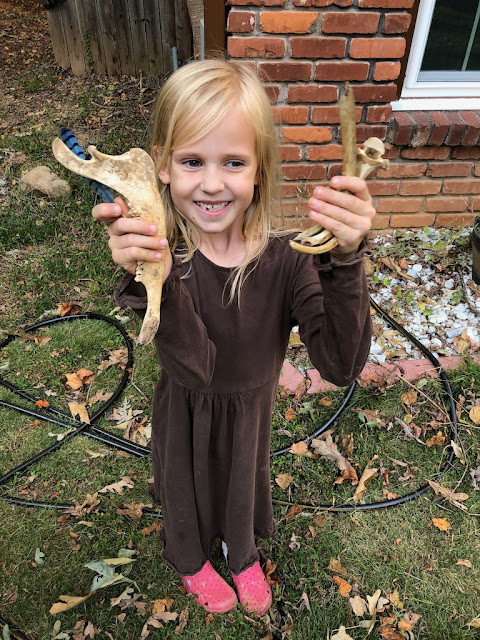 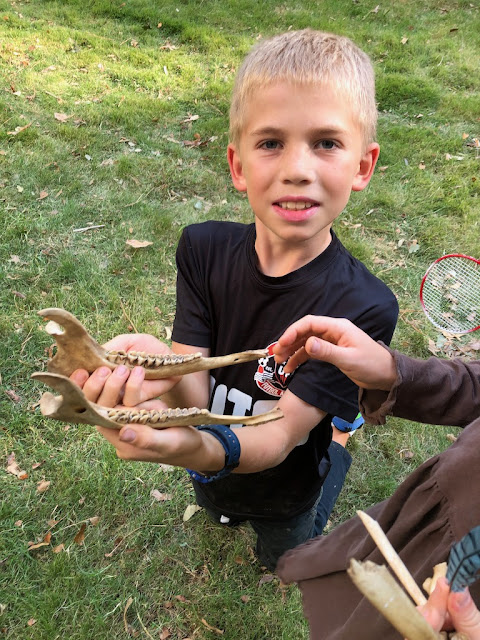 Zoë is slightly worried about whatever it is that's killing creatures in the back-backyard because not only are they killing deer, they're killing birds, too! She found a number of blue jay feathers near the deer skeleton. So clearly there's a creature lurking back there! 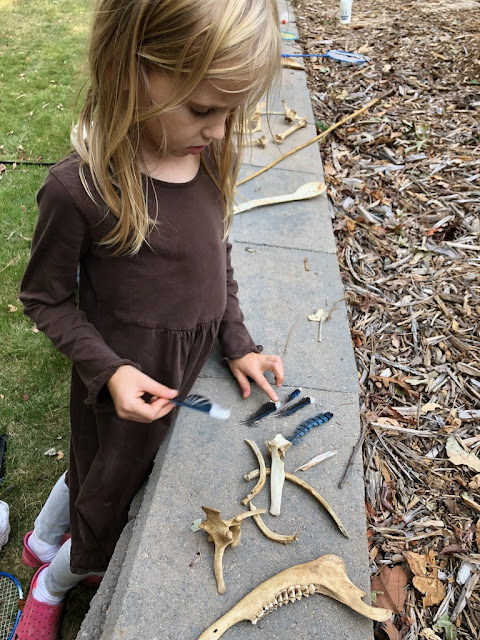 Or, I theorized, the deer died of natural causes and the blue jay met a hawk.
I mean, it's true that we get black bears coming through here every now and again. And it's also true that there are coyotes around. But I'm not sure that either of those two animals are going to hunt and take down a deer in the backyard. They strike me more of scavengers than avid hunters.
(I stand corrected—not only can coyotes work together to take out an adult deer, they have been observed taking down an adult moose. So, maybe a coyote got this deer.)
Anyway, here are the bones Zoë and Benjamin classified before heading into the woods to collect more: 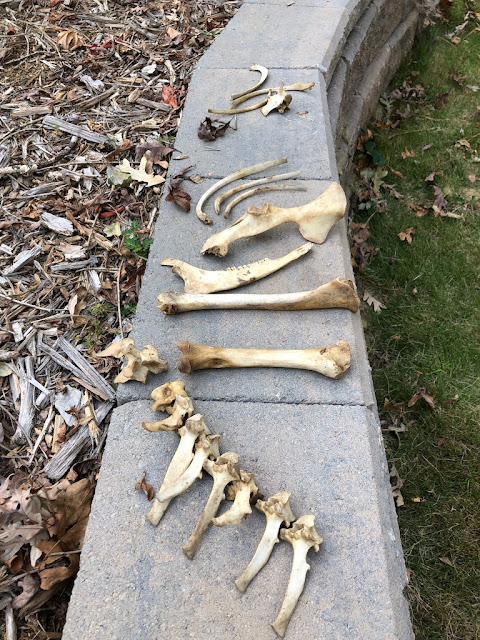 They've got the beginnings of the spine at the bottom, with the long thoracic vertebrae on the bottom, leading into the less-spiny cervical vertebrae, then some...leg bones of sorts...a jaw bone, part of a sacrum (our little friend Reed made off with the scapula), then some ribs and...something else...and more ribs.
It's like nature dropped a science lab right into our laps!
We're not studying biology right now...we're studying chemistry...but that's okay! One of the recurrent themes in our science curriculum is that everything is connected. Plus, Andrew wants to sterilize the bones because he's freaked right out that they're in our house, and surely that has some chemistry involved.
Alexander was singing Dry Bones while the bigger kids (Benjamin and Zoë, as well as Rachel and Miriam) went off into the woods to fetch more bones. He learned it from Khan Academy Kids (an app I highly recommend), which has a little Halloween section right now, including a little Dry Bones video. It's different from the version I learned growing up, but we've had fun singing his version together, anyway.
He had been dancing around the bones singing on the wall, but stopped when I pulled out my camera. I coaxed him to sing a little bit for me, but you can tell he's doing it under coercion and not for the love of it, unfortunately. Still cute though!
He's been wanting to decorate for Halloween and I'm not very good at that sort of thing, but...now that my house is covered in spiders and bones I think we're all set!
Posted by Nancy at 12:08 AM