Andrew flew in from Miami on Wednesday afternoon, though he didn't get home until around dinner time after taking the train (my mom picked him up from the station and brought him home to us). He spent all day Thursday at work and then remembered on Thursday evening that he had a workshop on Friday that he had to present at, which was rather bad timing because we'd planned to head up to visit his sister on Friday afternoon...

So instead of comfortably spreading out between two cars, the kids and I ended up in the van with Andrew's (poor) parents and he got to drive up to Idaho by himself after the conference.

The drive up (for us) was such a disaster that Andrew ended up arriving to the hotel while we were still unloading the van, even though he'd left hours after us. It's typically a 3.5 hour drive but between traffic and children it took us over five hours to get there.

Probably fifteen minutes into our drive Zoë announced that she had to go potty.

"Really?!" I said, wincing a little. "You went right before we got in the van. Can you hold it for a little while? Because we have to find a place to get off..."


"Yeah," she said and we gave her a snack to distract her.

She has developed a little bit of a girl-who-cries-pee habit at church (to get little breaks from sacrament meeting, I suppose) and will say she needs to go potty but then won't do a thing once we get to the bathroom and will be like, "I don't even know why you brought me here, Crazy Lady, but let's go skip through the halls!"

So part of me wanted to be skeptical about her need to pee, but the other part of me knows that she's still only two and when two-year-olds say they need to go potty it's really something that should be acted upon immediately.

"Are you sure you need to go potty?" I asked her a few minutes later.

"Nope. I don't have to go anymore," she shrugged with a blasé attitude, so we pressed onward through the quickly thickening traffic.

But a few minutes later when she asked for a refill of popcorn, I looked back at her and she was just...acting funny.

I guess when she said she didn't have to go anymore she really didn't...because she already had.

We made it all the way to Lehi before taking our first pit stop. I was not happy. With little to no motherly tenderness, I helped her change her clothes, procured a grocery bag for her to sit on so her fresh clothes wouldn't get wet, and told her, "No Baby Dress Up for you!"

We would go on to make two more stops, but she didn't wet her pants again. The Baby Dress Up thing was a pretty big deal for her. The other kids didn't know that I had taken away that privilege for her (because I'd done so in the privacy of the gas station bathroom) and at one point Miriam offered her electronic device to Zoë, just to be nice (that had to be the reason because Zoë wasn't even misbehaving or whining at that point).

"Here, Zoë. Would you like to play Baby Dress Up?" Miriam asked her, holding out the phone.

"Is that true?" Miriam asked me.

"It is true," I confirmed. "Thank you for being willing to share with her, though. And thank you, Zoë, for remembering your consequence and sticking to it."

Honestly though, I think sitting on the garbage bag had a far larger impact on her. She was devastated that she had to sit on it and kept fussing about it (it's crinkly, it sticks to her legs, etc.) and when she told Daddy about it she said she was never going to pee her pants again because then she'd have to sit on a garbage bag. She was quite happy to announce the following morning that her carseat was dry!

(Which reminds me that I need to wash her cover (and Baby Ander's while I'm at it because his is caked in dry spit up)).

She was also upset that her carefully curated "hotel outfit" was ruined (she was so excited about staying in a hotel that she wore her fancy white flower shirt with some pink pants...which she then peed on (of all silly things)). She was pretty tired, though, which I think contributed to her lack of control. She took another nap (April has been a good month for napping)...

Here's a collage I sent to Andrew while we were driving: Alexander did alright on the drive. He ate his first applesauce pouch, which he seemed to enjoy, and didn't fuss too much until around Blackfoot. They're doing construction right now so we were down to one lane each way and there was an accident on top of that so our lane was virtually at a standstill. He was feeling super cranky so I just took him out and fed him (people were out walking their dogs and stuff—traffic was that backed up). One of our pit stops was dedicated to Alexander; he really just needed to nurse, so we let the kids run around in a field while he ate.

Here are three of his four stages of falling asleep in the car (not pictured is screaming his lungs out). He fell asleep around Salt Lake City and only slept for 45 minutes or so, sadly.

Benjamin was hilarious to listen to (both on the way up and the way down). When we reached downtown Salt Lake he looked out his window and declared, "It looks like we are in New York!" 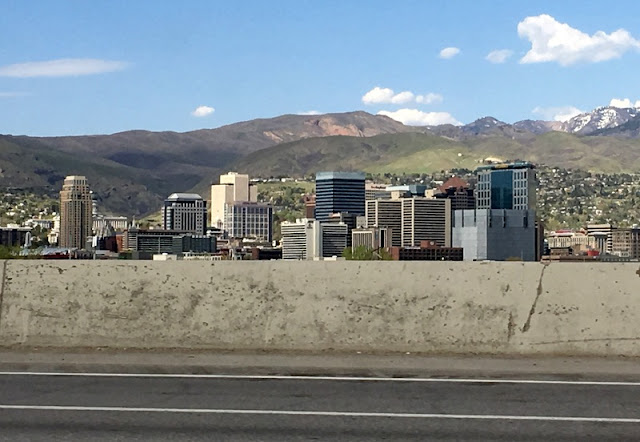 Yes...just about the same as New York. Speaking of which, our family uses the acronym NYC to stand for "not your conversation," and when someone enters the room and asks for an entire conversation to be rehashed for them we will sing, "NYC! This isn't about you!" to the tune of NYC from Annie (though, to be honest, we just as often sing it without changing the lyrics, "NYC! What is it about you?"). Zoë, however, sings, "YNC! What is it about?"

Anyway, at one point he called from the backseat, "Please may I have some unhealthy stuff?"

He didn't want applesauce or string cheese or anything like that. He wanted the candy, so I broke out some jelly belly beans for the kids (and maybe me). I gave them each a handful and they spent several minutes comparing jelly beans and guessing flavours.

Poor Zoë got a black liquorice jelly bean, which flavour she found rather unpleasant, and cried, "Momma! This one is a-gusting!"

"You got caught in candy?" I asked.

There were eye rolls all around over that one. My kids are always so proud of my jokes.

Oh, the last of my notes (ie. text messages to Andrew) is a gem of Rachel's. We were driving past a bar shortly before arriving at the hotel and she said, "Pool darts? That doesn't sound very safe..."

All in all it was only a mildly monstrous ride. We were all quite happy when we arrived at Auntie Emily's house. We sent the kids up to surprise her (they asked if Gavin could play, though you don't hear that question on the video) and she was certainly surprised (she cried, so...that means it was a success, right?):

We debated a bit between sending the big kids up like that or doorbell ditching Alexander on the front porch...

We had an action-packed weekend so I have a few more blog posts up my sleeve, but for now I suppose I should just thank Andrew's parents for so patiently driving our little brood up to Idaho to see their cousins because we all had a blast!
Posted by Nancy at 1:11 AM