We celebrated the eve of lent with a nice batch of pancakes. It took us awhile to get the pancakes since IHOP was offering free pancakes in honor of "National Pancake Day," which we actually celebrate twice: once 40 days before Easter and once sometime in September. Anyway, not a lot of people can resist free pancakes and after waiting in line for an hour we decided that we could just go home and make our own pancakes.

We had pancakes, homemade syrup, and bananas. Yum.

Andrew pretending he's going to eat all those pancakes 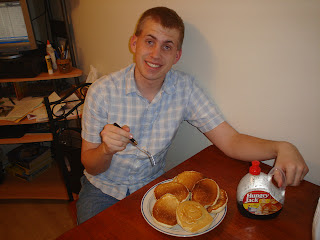 Andrew has even already started to spoil the baby...he made two little baby pancakes just for the baby, which I had to eat, of course.
Note the semi-small one, and then the little speck. I ate those. And more. 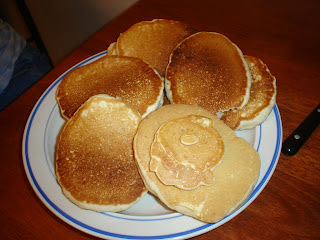 Andrew and I also discussed everything we know about pancakes, Catholics, Anglicans, and Russian Orthodox, which boiled down to be "not a lot." Anglicans eat them as a last hurrah before they start their fast, during which eggs, sugar, anything fancy is out. Russians however, only eat pancakes during lent...unless they are like the family that I lived with, in which case they are probably quite un-orthodox Orthodox.

Ahhh...pancakes, sour cream, and granulated sugar. If you were lucky: sweetened condensed milk. But oh, so many types of pancakes: blin, crepes, olaties...pure yumminess!

When I was in Russia, I also got to go to a hxram, a Russian Orthodox Temple, with some missionaries for a traditional Easter celebration. I've never been around so many people passing around candles before in my life. Anyway, at a certain time (I think it was around midnight), the priests/everyone who thought to bring Easter bread with them takes it out signaling the end of the fast (because the bread is leaven...which you aren't supposed to eat during the fast).

The bread, kulich, is pretty good, I guess...I mean, the leftovers got old, but leftovers tend to do that. It's kind of like hot-cross buns, only a little different. Just a dry bread, sometimes with raisins, sometimes without, and it has a glaze on top.

So, hurray for pancakes! Hurray for Easter--which is really coming up a whole lot faster than I've been expecting it to, which I'm really glad for since that means spring is coming, too!

Heiss family portrait, with a pancake 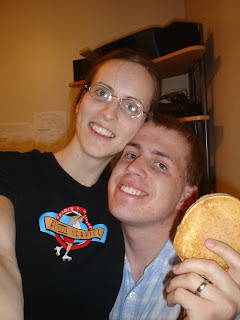