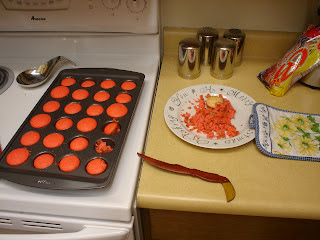 I am planning on writing a book about all the mishaps we've had in our kitchen since being married (and perhaps including a few stories pre-marriage). Today we created another one.

After going home teaching together (yes, we go home teaching together. I am Andrew's companion), we decided that we should make some Valentine's Day treats for the ladies we teach. Two are widowed and one is divorced and goodness knows they get lonely because they need to talk. Let's just say we try not to schedule one particular lady with any less time than one hour. She just needs someone to talk to.

In addition to making them Valentines, there were a few other people in our ward that we wanted to hit up, so we would need a few more treats than just three.

I made some mini-cupcakes (cherry-chip, mmmm), but that really didn't look like enough for all the people we were going to deliver treats to, so we decided to make another batch. 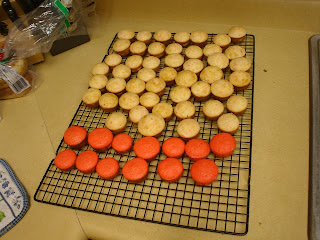 In an effort to make it super-Valentinesque, we used a white cake mix with cherry Jello mixed in. Aside from being neon red, they really aren't too shabby, except that what you see in the picture is all that survived. There should be about equal parts white and red cupcakes, but...I failed miserably at trying to take them out and broke cupcake after cupcake in half. 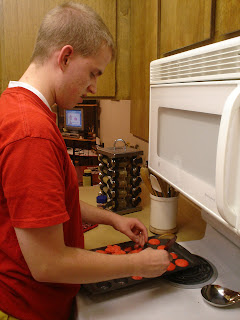 Andrew took over for me (he's the one who got all the whole ones out), but even he didn't do too great. 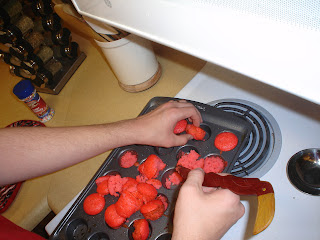 We completely destroyed well over 4/5 of them. They just didn't pop out as well as the cherry-chip ones. I'm not sure if it was the Jello, or the fact that we used a white cake mix, which is a little more delicate than other cakes (it doesn't call for oil or egg yokes). 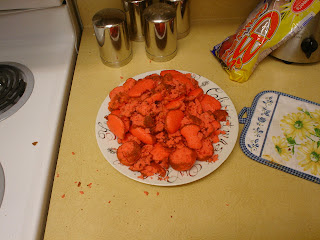 Andrew says that the crumbled cupcakes mixed in with a little milk turns into a pudding-like substance that is actually pretty good. I'm not too sure about that, but I've been sneaking into the kitchen to eat the cupcake tops...
Posted by Nancy at 11:13 PM