Andrew checked out a book at BYU--Napoleon's Egypt--several weeks ago. He was reading it rather slowly and eventually his due date was up. Someone else had a hold on it, so he couldn't have renewed it. He debated keeping it a few days past the due date, but since a student wanted the book it was officially recalled which meant that the fine would have been $10 per day.

That's a little steep by anyone's standards, I think.

He was sure to return the book online. UVU, nee UVSC, has the book, though, so we spent an FHE a few weeks ago at the new library on campus. It's so new that they didn't have call numbers on the shelf yet so it took some serious investigation skills to find the book!

Apparently they only check books out for two weeks at UVU, so the book was due back this Monday. Parking at UVU is ridiculous. There are no free visitor's lot and the only paid lot by the library was out of commission the last time we went. To avoid the parking hassle, Rachel and I walked to UVU to renew the book.

UVU isn't terribly far from our house.--it's about two miles--and they have some lovely lawns. Rachel and I made an afternoon of the trip.

I told her about how UVSC was when I attended the campus and we both lamented the fact that the sidewalks were terrible. Whoever planned them wasn't considering strollers or wheelchairs. We'd be walking along, happy as could be, and then we'd hit a set of stairs with no ramp in sight. Or the sidewalk would just end on our side of the street, only to start up on the other side of the street with no crosswalk in sight. 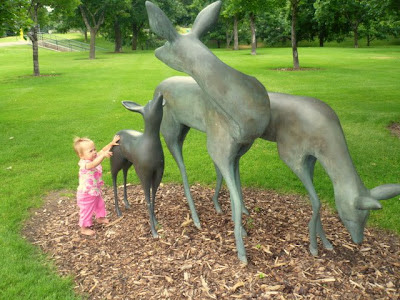 Visiting the deer
It took us a while, but after a few stops, we finally found the library. We ran in, renewed the book, and left. It took about that long. Too bad we had to do it in person--since Andrew's not a UVSC student he couldn't renew it online.

Rachel was restless, though, so I let her get out of the stroller and we played on the stairs in front of the library for a long time. She does love her stairs! 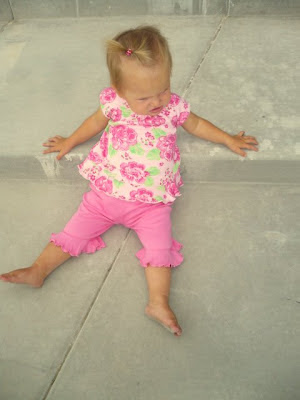 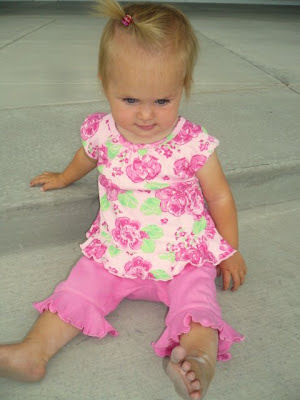 They also have some cool statues in front of the library--benches with people sitting on them, and kids playing games. Rachel was brave and walked right up to the man sitting on the bench. She took to him alright but thought that he should lose the hat. I don't know what she has against hats. 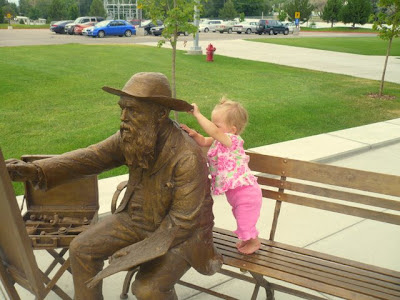 She also pretended to ride a paper airplane with the boy in this statue. She looked up at him and then squatted. Such a little copycat! 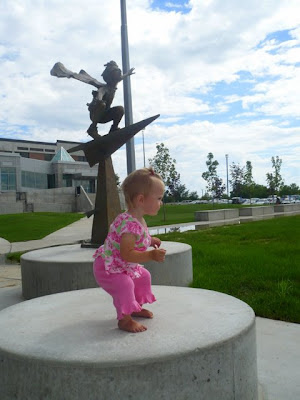 We had a lot of fun playing before readying ourselves for the treck back. UVU campus is rather hilly and we were at the bottom of a big one. After pushing Rachel up College Drive I was ready for a nap. Instead we went into the computer science building, where I had my philosophy class back in the day, and took long drinks from the drinking fountain.

We were both ridiculously hot and sweaty when we got home. I was too tired to carry both Rachel and the stroller up the stairs so instead we sat on the lawns and chatted with some moms, all waiting for their husbands to come home from work.

When Andrew got home, he helped us in and made dinner for us while we sat on the couch and relished the air conditioning. I think that's a fair tradeoff. Andrew cooks dinner and we make a four-mile library trip by foot!
Posted by Nancy at 10:54 PM