I was stressing all week about arranging transportation to get ourselves out to the leprosarium for the branch service project. We were told there was some sort of a list that we had to get on to get seats on the bus, but every time I called the Burtons, the humanitarian missionaries volunteers, no one would answer.

Sometimes when people say “bus” they actually mean “van.” Last year we also arranged a “bus” but it was just a twelve-seater van and some people had to take their private cars out to the leprosarium as well. This year we were shocked to see that we have our very own charter bus. Who knew? 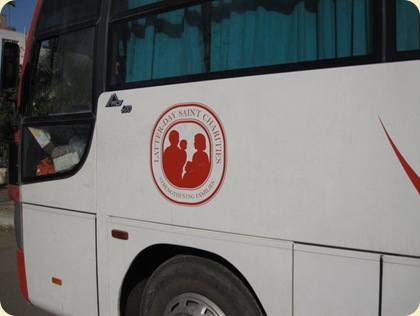 The ride out to the leprosarium was much more comfortable than it was last year—although part of last year’s discomfort might have been due to being pregnant with Miriam…I seem to suffer from motion sickness when I’m pregnant, which isn’t the same as morning sickness, I don’t think, since it only strikes in moving vehicles. Anyway, it was a good thing the ride was more comfortable this year because it was much longer than we anticipated.

Our driver was on the hunt for diesel. Apparently there is a diesel shortage, or we can assume that much since diesel wasn’t available at any of the gas stations we stopped at along the way. Butane canisters are also in high demand right now—luckily for us, our stove uses natural gas. We didn’t end up filling up anywhere, although we pulled into several stations to check.

When we had given up finding diesel and were happily cruising along our way there was a tremendous *BANG!* that rocked the whole bus. We pulled over and the driver and a bunch of the men got off the bus to investigate—they checked for blown tires, rocks, shot gun holes, and everything else they could think of—but found nothing so loaded back on the bus.

We were all quite happy to (finally) get off the bus at Abu Zaabal and filed out into the courtyard where we noticed a lovely display of multinational flags. It took us a moment to realize that the star spangled banner they featured was the American flag since it looked a little different than we remembered… 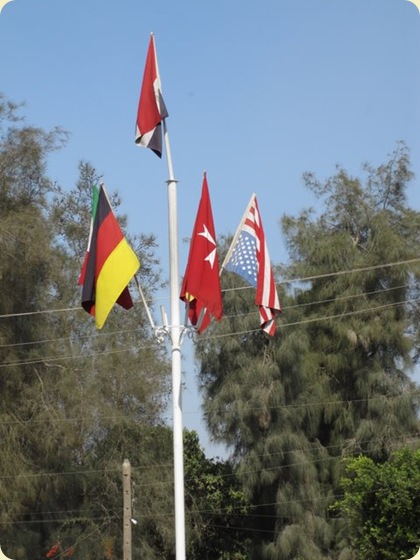 After a briefing from the resident doctor about leprosy—mostly reassuring the timid that we weren’t actually at risk for contracting leprosy at the colony—and a short explanation of our project we set to work sanding, prepping, and painting.

During the lecture I stepped aside to change Miriam’s diaper and was immediately swooped upon by a bunch of women.

“Ya haram, habibi!” they scolded, “For shame! Her skin is showing! The breeze will blow on her! Don’t you care about your baby?!”

They yanked on her clothes to try to cover up her stomach and legs and, yes, even her bare behind, while I was trying to clean her off from a rather poopy diaper she had had on the inordinately long bus ride we’d just had.

They even called a nun over, lamenting to her about my poor parenting skills. The nun took my side, though, and tried to quell their fears that Miriam would die from over-exposure while having a bum change in the open air on a balmy, tropical day.

I finished up with Miriam, fled from the flock of women, found our group, and tried to get to work, myself. Unfortunately, I felt again like I was contributing the “young mother’s mite.” I didn’t do much, but I did do what I could while bouncing a baby and chasing a toddler and Rachel got to learn firsthand the importance of service and hard work. 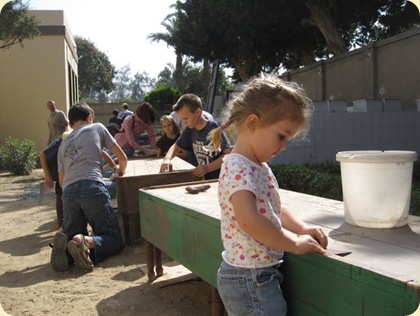 There had been a fire in one of their dormitories and we were helping fix it up. All the beds and furniture had been dragged out of the dormitory and were standing around the grounds like skeletons. 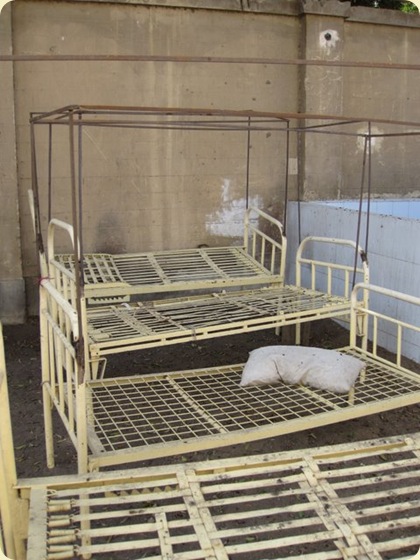 We sanded down the frames for the mosquito nets and primed them. 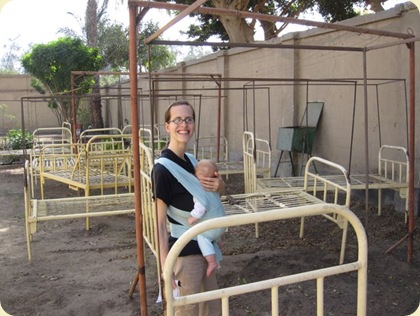 We also sanded down and painted several benches and other random bits of furniture and prepared new panes of glass to be put in the windows. 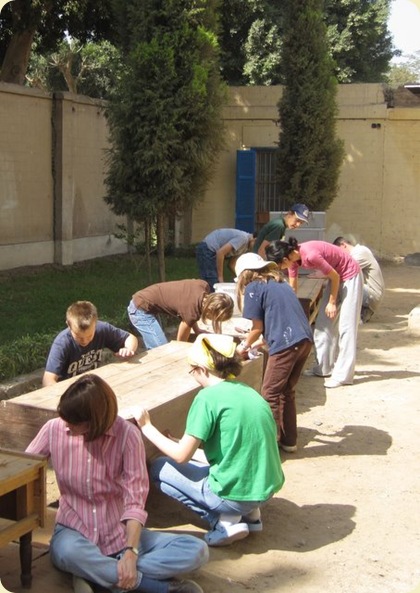 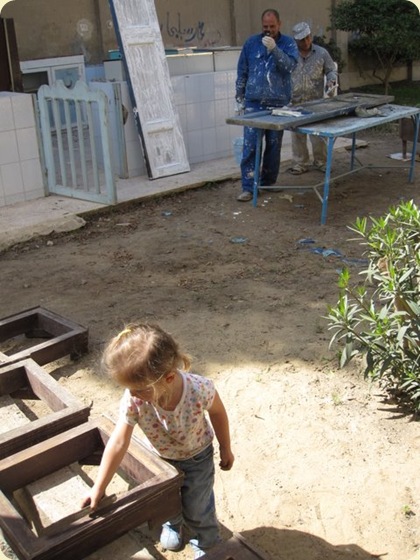 Andrew was a sanding/painting machine. I’m glad he came... 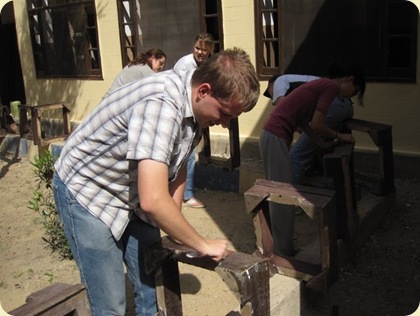 …even though he ended up getting red primer all over himself. He started out being careful but after several hours of painting, his glove was covered in paint and the finger holes had all burst open and he had paint dribbling down his arms. When he tried to wash it off with some paint thinner he ended up just rubbing it around on his arms like lotion so now it looks like he has a bad sunburn. I don’t know how he manages. 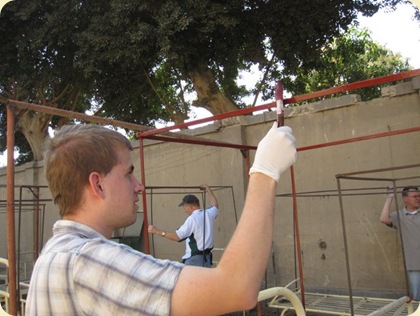 He also got paint in his hair and has requested that I cut it. I can’t decide it this was an accident or if he thought, “Hey, if I get paint in my hair then she’ll have to cut it.”

Rachel and I steered clear of the red paint and instead joined in on painting some benches green, a carry-over project from last year, I suppose. There was a shortage of paint brushes, so after things had been sanded down Rachel and I wandered aimlessly (and played in the dirt a lot) while the nuns tried to procure some more. On one of our wandering rounds we found that they had found more paint brushes—there was an unclaimed one by a bench that President McCallister was painting. I asked if we could help him.

“Sure!” he said and surprised me by immediately handing Rachel his paintbrush. He adopted her as an apprentice, guiding her hand in large, sweeping strokes while they worked together to paint a bench a lovely shade of green. 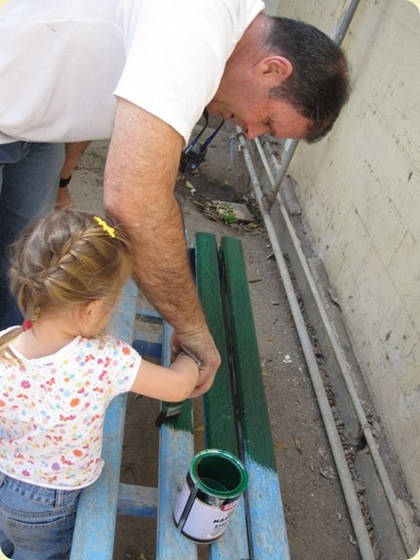 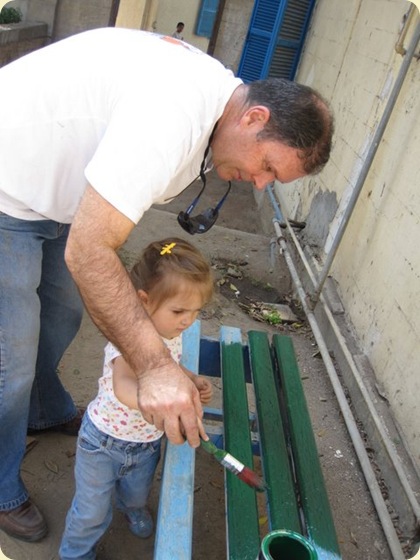 When they were finished with that bench they painted another and another. Rachel ended up getting paint all over herself—jeans, shirt, tummy, arms, face. (And lest you think I only stood around taking pictures, I helped paint those two green benches in the background of the following picture while bounding a baby, just sayin’.) 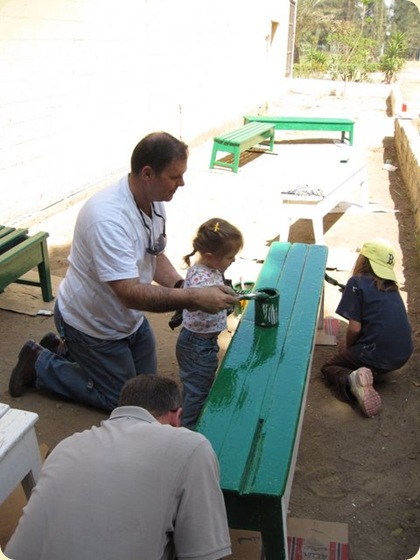 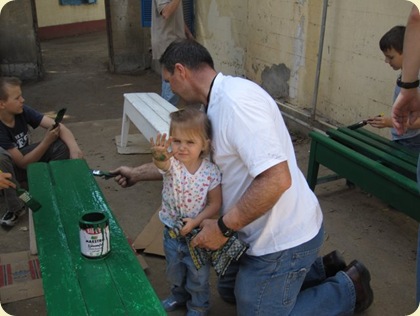 He even let her have a go all on her own. She had a blast. 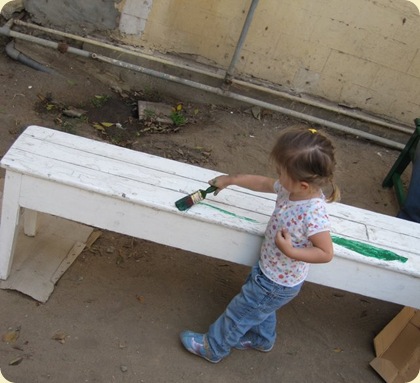 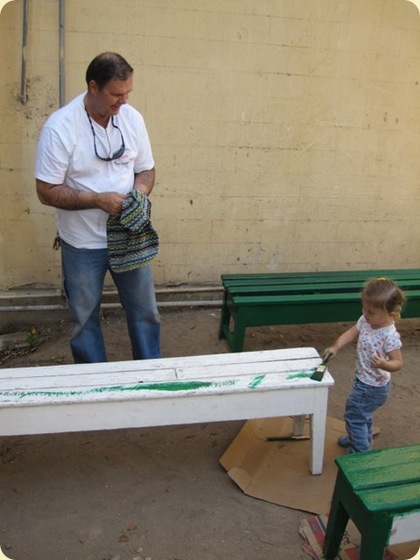 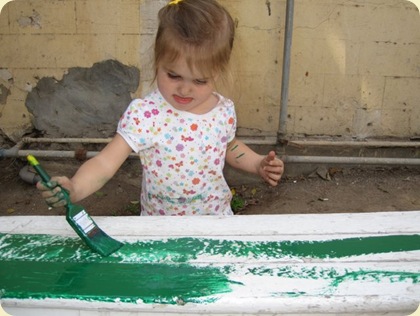 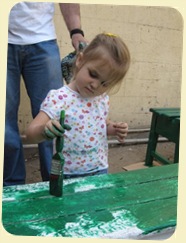 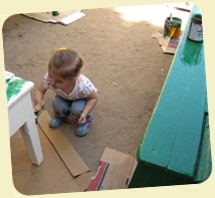 After a while he stepped in and helped her give it a nice, even coat. 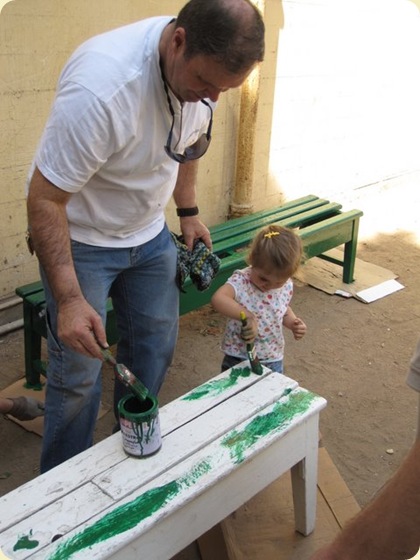 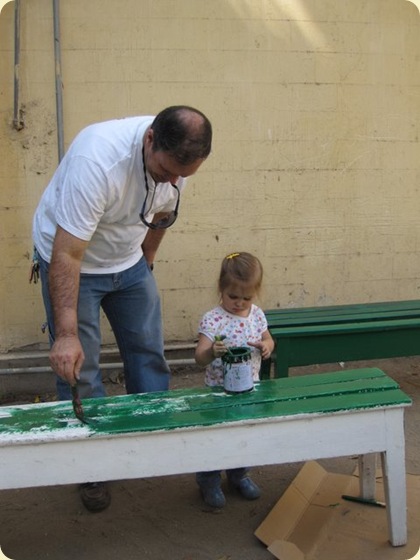 Rachel was so happy to be helping, and I was so touched that President McCallister took the time to help Rachel like that. She felt so special and grown up, away from Mom and Dad, painting with the big kids and having a grandpa-figure all to herself. It would have been easier in so many different ways for him to brush her off to the side, but he didn’t and I really appreciate that.

When all the benches had been painted, he helped her clean off her hands with a rag soaked in paint thinner. Leaving her in my care, he left to help finish working on the beds.

“Come on, Mommy,” Rachel tugged at my jeans, “I want to follow that man. He’s nice.”

Poor President McCallister has been trying to win over Rachel’s heart since we moved here and stayed at his place while looking for a place of our own. I think he finally succeeded.

I am also pretty sure Rachel knows his name so I don’t know why she insists on referring to him as “that man.”

In the middle of all our painting we collectively went to visit the room of a sixteen-year-old girl who had recently had her leg amputated due, of course, to leprosy. She was so happy to have us visit her (but wondered why we were all covered in paint). We sang her some fun songs and, I hope, made her day a little happier.

It’s a little surreal to be surrounded by people stricken with what I always considered a Biblical disease—people with curled fingers, warped legs, collapsed noses, and vacant eyes. Unfortunately the disease isn’t merely historical and so many people are plagued by it. This leprosarium has  approximately 750 patients, the nearby village houses between one and two thousand of their family members. That is probably only scratching the surface of the actual number of people in Egypt suffering from leprosy. 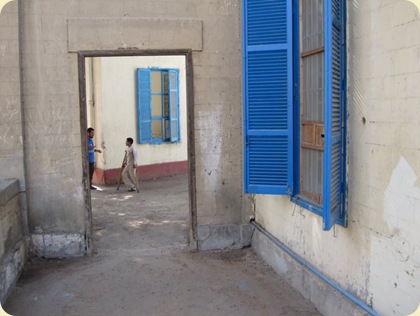 Rachel not only can say “leprosarium,” but she knows that the leprosarium is where “people with no fingers” live. Her childhood has been so different from my own.

When we were finished with most of our projects we took a break for lunch and a tour of the colony. We visited the bakery, the mosque, and the watershed that Latter-day Saint Charities donated a few years ago. 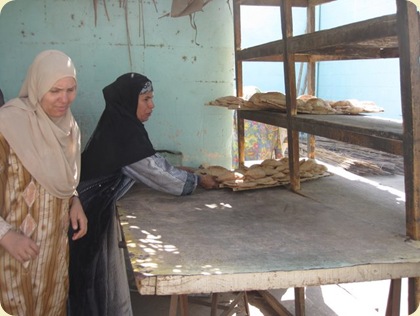 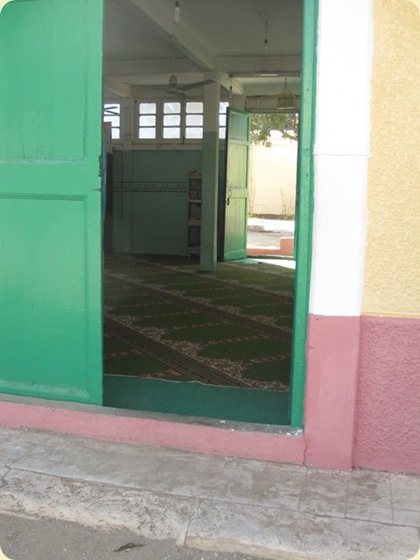 This time we got to go right up into the water treatment area, which was kind of fun. It reminded me of a field trip I took in grade nine. 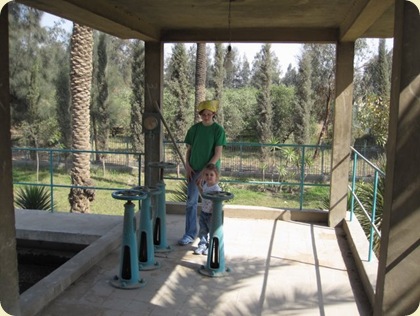 They have sand filters and what looks like a sedimentation tank of sorts. We got to walk along the walkway look at the tanks. Some of the boys got a little silly and went into the dry area between the filters and pretended to drown. 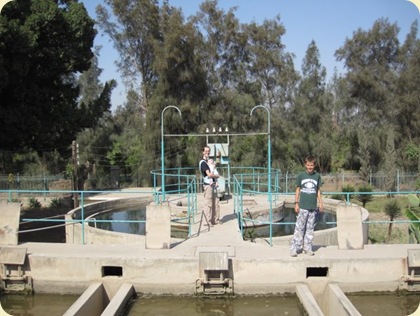 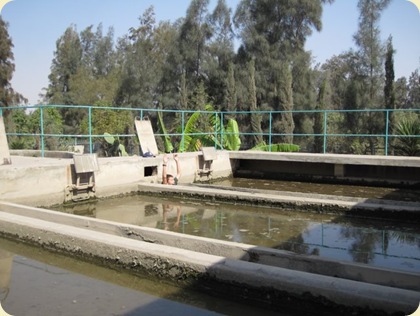 Andrew drank some water straight from the hose when we got down the stairs to prove that he trusts filtration systems. One of our quasi-Icelandic sisters was aghast at the appearance of the water. I thought it looked pretty good—the plant that I visited in Calgary had much more floating on top than this plant did.

“Haven’t you been to a water treatment plant in America?” I asked her, not thinking that perhaps that wasn’t a normal thing to do until after the thought had left my mouth.

She admitted that she hadn’t, so I explained what I could remember about sludging and filtering and so forth—that the water she see isn’t the drinking water, it’s the trashy left-over water. She still wasn’t impressed, explaining that in Iceland they get their water from glacial streams and it tastes fresh without filtration and contains wonderful minerals and so forth. She just “couldn’t believe” that the water would ever come out safe to drink.

But it does. And Andrew drank some to prove it. So if he gets sick…I guess we’ll have to move to Iceland or something.

While we were touring, some diehards finished painting the cinderblock walls out in front of the colony and when they were finished we all filed back onto the bus, exhausted. We didn’t get home until after 4:00, which made for an eight hour day. Miriam, Andrew, and I all napped on the bus but, wouldn’t you know it, Rachel stayed awake for the whole ride, hanging out with the kids in the back. That child has enough energy to power a small country.