Living in the Middle East has begun to rub off on me, I suppose, and I have developed this bad habit of neglecting to buckle my children into things. Cars, strollers, chairs…anything, really.

I am pretty good about remembering to buckle Miriam into her swing, but the bouncy chair? Not so much, no.

She’s even getting pretty good at purposefully getting out of her chair so she can roll around on the floor. She arches her back and then slides down until her head is where her bum should be resting and then she flips over and lands on the ground. It’s quite acrobatic in a slow-motion, not-quite-mobile kind of way. 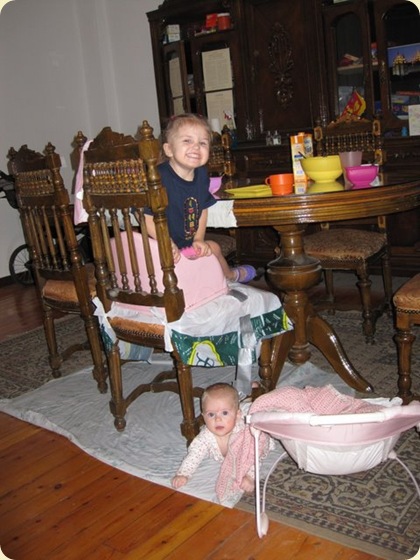 Usually I eat dinner with Miriam on my lap, but if it happens to be a day that she’s sitting in the bouncy chair I’ll sometimes glance over to check on her and find her happily squirming her way to freedom. 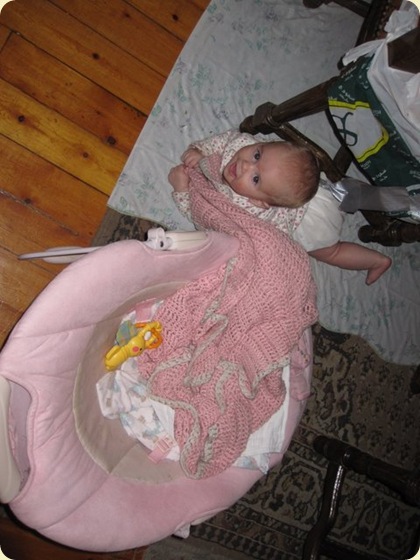 She can pivot around in circles now, quite rapidly, and can scoot pretty much anywhere she wants to be. Often she’ll scoot over to her play gym and start batting at her toys. Rarely she’ll be in the exact same place I put her when I enter the room after leaving her alone and our house is always echoing with calls of, “Where are you going, baby?”

Miriam isn’t the only one I don’t strap into things, naturally. If anything I’m even more conscientious of buckling her down because she’s new and I have these strong mother-bear instincts for her still. Rachel, on the other hand, is not-so-new and hasn’t been strapped into anything for, oh, about two years now. Has she fallen? Sure. Has she gotten hurt? Sure. Has her booster seat ever slipped off her chair in the middle of dinner while she’s mucking around sitting there eating her meal? Sure.

Isn’t that how we got the phrase ‘sit down before you fall down?’

If Rachel was buckled to a seat that was secured to the chair that was bolted to the floor she would never learn to sit still. She’s learned a lot about gravity and inertia and other deep scientific principles in her few, short years.

She knows all this, and yet…

While we were walking to go tutoring today, taking the same undeviating route that we always take, she forgot all about this.

There is this one particular curb that we have to step down from and it happens to be exactly where we need to cross the street. This particular curb isn’t your standard 6-inch lip from the street, oh, no. It’s more like a foot-and-a-half tall cliff.

I pushed the front of the stroller out into mid-air and then lowered its front wheel onto the street, just like always, but this time when I did so, Rachel went flying into the middle of the road.

Cars were coming, of course, since in Cairo there is always a steady barrage of traffic, and I could tell that my perfectly-timed frogger-dash across the street had been botched. So instead I leapt out into the road, with Miriam strapped to my front, scooped Rachel up, grabbed some part of the stroller, and used some sort of centrifugal force to propel us all to the median on the other side of the street.

After making sure that we were all still alive, which we would have been anyway since we were crossing in front of a speed bump—drivers here slow down to a crawl before going over speed bumps, sometimes making multiple attempts to get over because they hit it going so slowly that they end up rocking backwards instead of going over—I asked Rachel if she had heard me telling her to get ready.

She said she had. But at the last minute she was afraid she was going to drop her toy so she let go of the stroller to make sure her toy was secure. Turns out, this was a bad idea.

Or perhaps the bad idea was my leaving without strapping her into the stroller in the first place.

Whatever am I going to do when we get back to the States and I have to introduce her to seatbelt laws?