So, happy birthday, Uncle Patrick. All of today’s art projects are dedicated to you. You know, since it’s your birthday and all…or not.

(On a side note: Happy Birthday to Aunt Katharine! It actually is her birthday today).

Our crafting was interrupted by a “markering” break so that I could cut out the shapes we had traced. We only have huge scissors and Rachel isn’t allowed to touch them so I do all the cutting. She “markers,” that is she draws with felt pens, while I use the scissors.

Last month we read a story with the girl I tutor—rather, she read it to us—called Dolphin Adventure: A True Story by Wayne Grover. It’s a chapter book and it took us two weeks to read by reading a chapter a day (she is only required to read ten minutes a day). Rachel loves to sit and listen in on the story. I’ve never sure how much she gleans from the stories since the girl we tutor reads a rather slowly and the story was stretched out over such a long period of time with a whole weekend between parts of it.

Today while Rachel was colouring, though, she drew some pictures of the story. Here is Rachel’s book report: 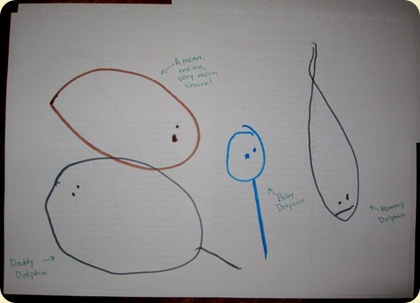 She showed it to me and explained what everything in the picture was. I told her I was going to label it so that we wouldn’t forget what it was. While I was doing that she quickly drew another picture.

“Here!” she said, shoving her paper in my general direction, “Label this, Mom!”

“Alright, what is it a picture of?” I asked her. 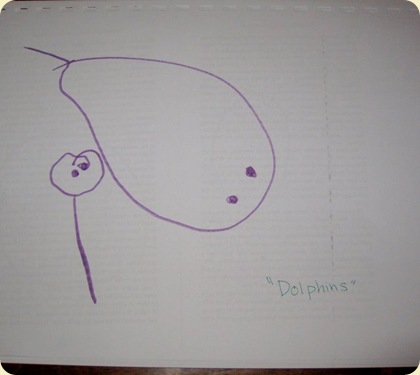 She drew another dolphin but decided, I guess, that it looked a little apple-ish. She asked me to label that picture, too, saying,

“Make sure people know that is a dolphin, not an apple!” 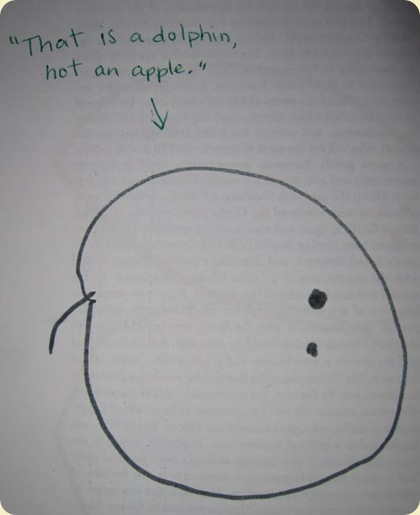 I was impressed that she remembered and understood enough about the book that she could recall the story and draw a picture of it more than a week later. It made me wish that we had The Chronicles of Narnia with us because Rachel’s favorite movie right now is “The Lion and the Kids” (better known as The Lion, the Witch, and the Wardrobe). I think she would enjoy reading that, a little bit at a time, before bed. Oh, well. That will have to wait.

Next she drew a birthday picture for Uncle Patrick. I thought about saving it for June, but she was so proud of it we decided to share. Uncle Patrick, that black head with the legs sticking out of the bottom is you. I think it bears a striking resemblance. 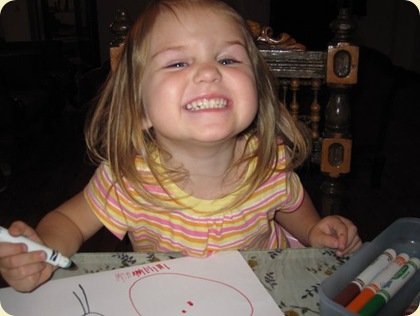 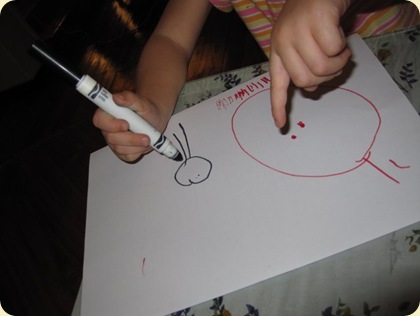 Alright, Rachel’s gone through the whole stack of paper that I left her with and is hollering at me to come and label more pictures (why, oh, why did I start labeling pictures?) so I’d better go finish up craft time with her before she colours her entire hand blue or orange or something…not that she’s ever done that before… 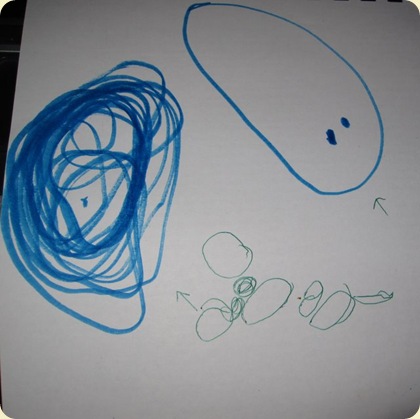 So, here are our St. Patrick’s Day crafts for today. 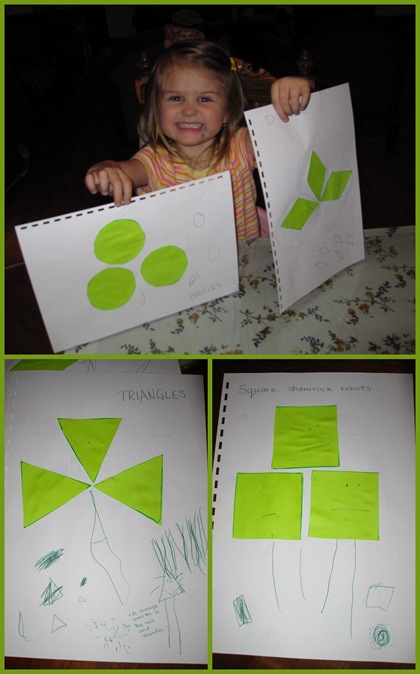 We traced different shapes and made shamrocks out of them. Rachel decided that the square shamrock looked like a robot and then asked if she could make some robots so we cut out more shapes and spent a while making pictures out of them. While we did this, Rachel chanted, “Rectangle, triangle, rectangle, triangle, semicircle, semicircle, circle, square!” 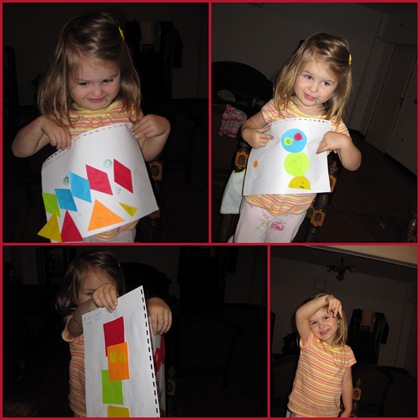 That’s from Shape Space by Cathyrn Falwell. We don’t own a copy of her book but we do have a copy of the January 1996 Ladybug magazine and the poem is featured in there. Rachel loves it.