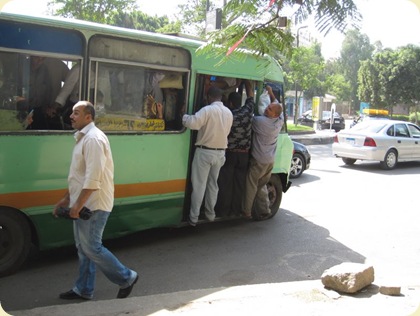 It’s not unusual at all to see a bus overloaded with people and leaning so far that its perilously close to tipping over, but I took a picture because in just a few days that will be unusual. 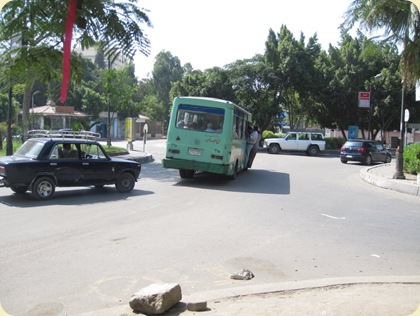 Our bus finally came (no one had to ride hanging out of the door, don’t worry, Mom) and we arrived to campus, only to be stopped by the bus patrol. They wanted us to pay for the bus ride. We showed him our invitations to the graduation, we showed him the letter stating that we could ride the bus to campus free of charge, we showed him Andrew’s cap and gown. He pulled us off to the side and asked all his buddies what they thought. Finally he let us pass only so that we could get stuck at the security desk at the gate.

Campus was crawling with security. There were blockades at every walkway leading to the auditorium and guards stationed throughout campus. They didn’t want anyone going in or out. I don’t think I’ve ever seen so many guards in one place, but I’ve never been to prison. It might be worse in prison.

We ignored all the guards and all the ushers and all the photographers vying for our smiles and took our own pictures. Josie came with us to help with the picture taking and to sit with me in the audience. She’s a nice sister. 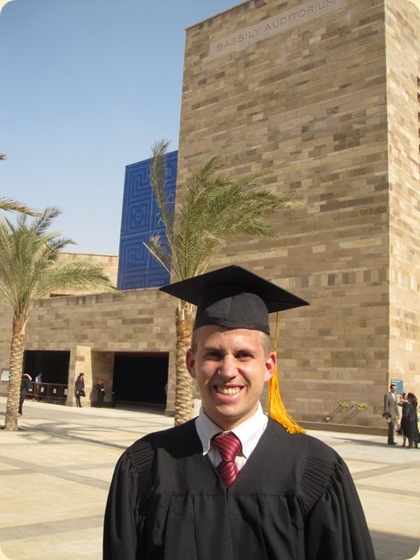 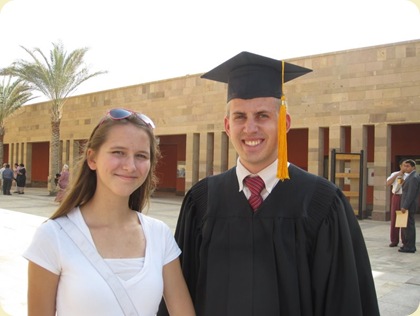 And I may or may not look like I hopped out of the shower minutes before running out the door. If only I had known the bus was going to be fifteen minutes late! 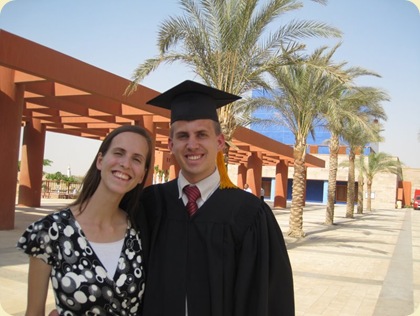 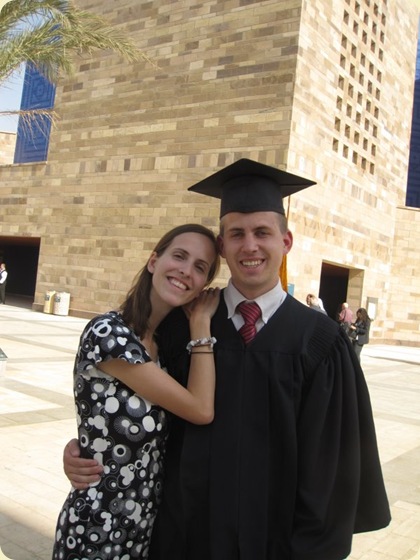 They divide the ceremony here so that graduate students have their ceremony separately from the undergraduates. They called it an “intimate” setting and really it was. The entire program lasted about an hour and a half, which was really nice because sometimes graduation ceremonies can be painfully long. 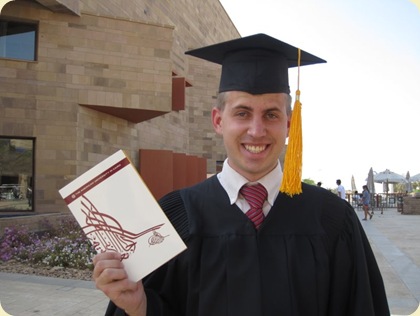 The keynote speaker was Gabriel Hawawini, an economist who was given an honorary degree right before speaking. He spoke about…economics, naturally…specifically he spoke about the economic crisis that erupted in the United States two years ago and which has been leaving a trail across the globe ever since. After discussing some theories and describing how everyone is pointing fingers to avoid blame and some other technical economisty stuff he said that the main reason for the crisis could be summed up in two words: ignorance and arrogance.

He said that educated people are most often the people who fall into the trap of ignorance and arrogance and discussed ways that we can avoid falling into that trap. I don’t remember what all his advice was, but some of it was to pull the “that will never happen to me” card and to never do something that you know is wrong for any reason. He had some good advice but it was sheathed in jargon and thus his speech ended up being riveting, but also kind of boring. 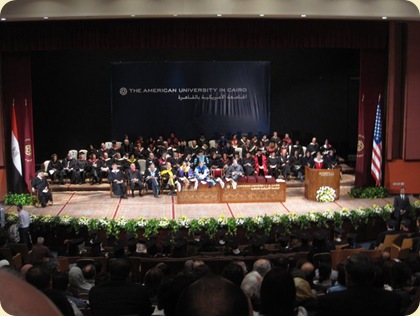 Cameras were technically banned during the ceremony because they had hired a professional camera crew who filmed the entire thing and kept shining unforgivably bright lights in everyone’s eyes the whole time. However, everyone and their dog had brought along their cell phones and cameras and children. We had arranged some babysitters for our girls (thanks Chelsi and Megan and Aden and Jaehee and Cait—apparently our girls are a handful and require five adults to watch them) so we didn’t bring them, but I did bring our camera and started snapping pictures along with everyone else.

I’m not sure the security was too happy about it. At least, this guy didn’t seem to be. (You probably can’t tell, but that guy in the mortarboard right in front of grumpy security officer is Andrew). 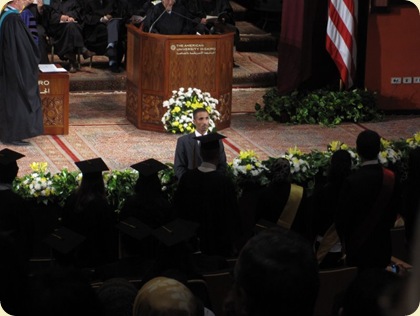 The graduates received their diplomas by school in alphabetical order by first name, so Andrew was right in the front of his class when he received his diploma. It has to be alphabetized by first name because no one quite knows where a last name begins or ends in the Middle East. Some of the names on the program just kept going and going and going for five, six, seven generations.

One name that stood out was Mohammed Mohammed Ahmed Mohammed. I wonder who he’s named after—his father or his great-grandfather?

I was so glad that Andrew’s middle name was printed in the program—it made his name a little longer. I wonder if they would have read out Andrew Reid Frank Heiss if he had asked them to. 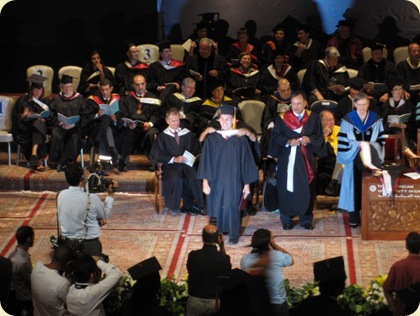 For some reason I got a little emotional and teary-eyed when they hooded him. I think it just hit me that we’re really done here.  Andrew really finished his master’s degree. We’re really going “home.” And I’m really proud of him.

There were some awards presented after they’d distributed the diplomas and Andrew thought for a minute that he had received an award and they just made some typos on his name. He didn’t get it, though. Andres Naess, a Norwegian, did. But just for a second Andrew got all flustered. It was funny.

Before they dismissed us we had to sing through the AUC hymn. I didn’t know they had a hymn before yesterday. Andrew didn’t know about it until the day before that. It was written in 1919 and is full of awkward, archaic phrases like “shoulder we will stand to shoulder” and was really not quite what I was expecting. And then the audience broke into seemingly spontaneous clapping patterns. Of course. Clapping is what they do here.

No one was singing but everyone was clapping. It was…odd.

I recorded the whole thing and will post it later.

There was a reception after the ceremony with little snacks and juice boxes and things. We grabbed some and wolfed them down before sneaking past security to the main campus where we stole a few pictures before racing back to the gate so we could catch the eight o’clock bus back to Maadi. 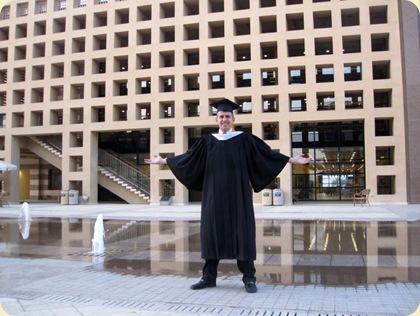 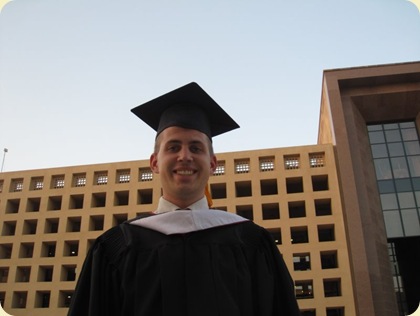 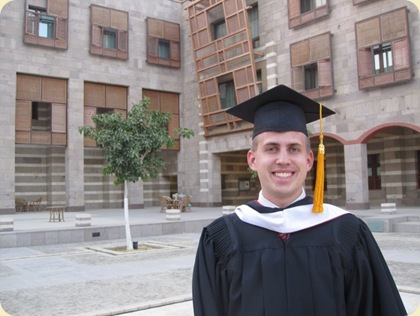 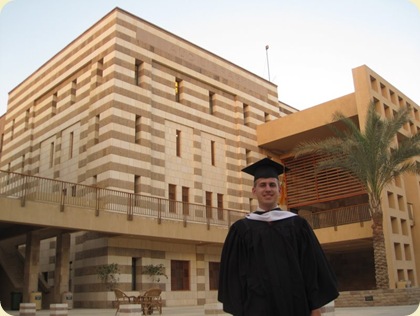 This morning we grabbed the girls and headed to the downtown campus to take pictures. We got on campus without any problem, which was amazing. Andrew just flashed his ID at the guard who said, “And this must be your wife,” before inviting the girls and I to skirt around the metal detector lest my dear daughters’ brains be magnetized or whatever it is they think will happen to children if they go through.

Miriam wore the gown and mortarboard that Andrew wore at his dad’s graduation from BYU and that Rachel wore when Andrew graduated from BYU. His mom made it and sent it out with Josie so that Miriam could wear it, too. 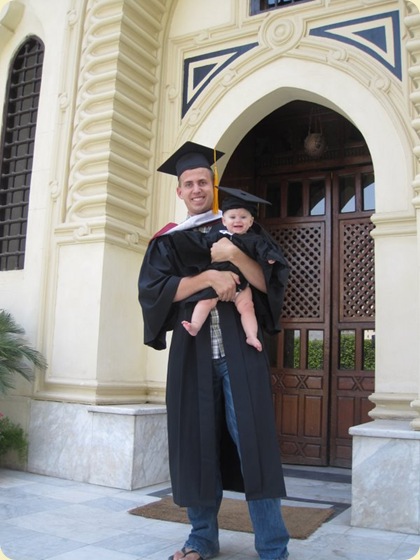 Rachel was really upset about not having a matching outfit, which is ironic because she sure pitched a fit about having to wear one two years ago! 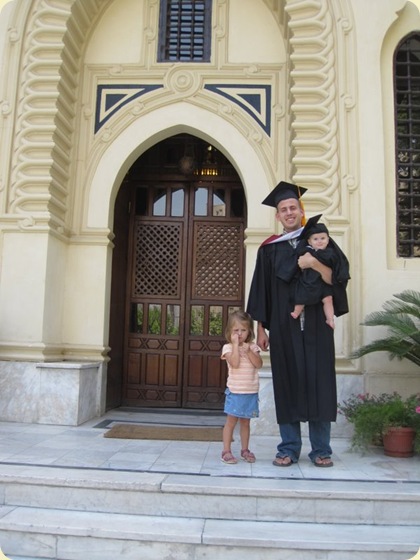 We let her wear the cap and that made her a little happier but it didn’t have a tassel so it wasn’t quite good enough. 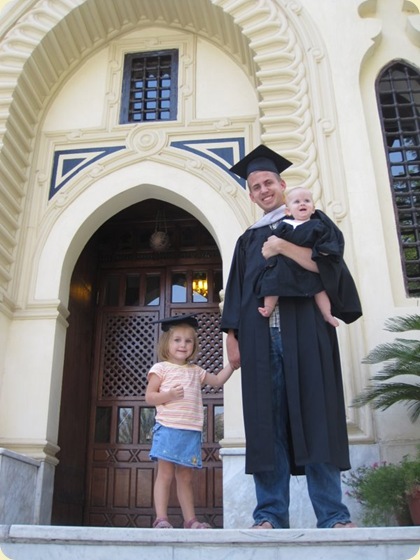 So she had to borrow Daddy’s hat and that made everything better. 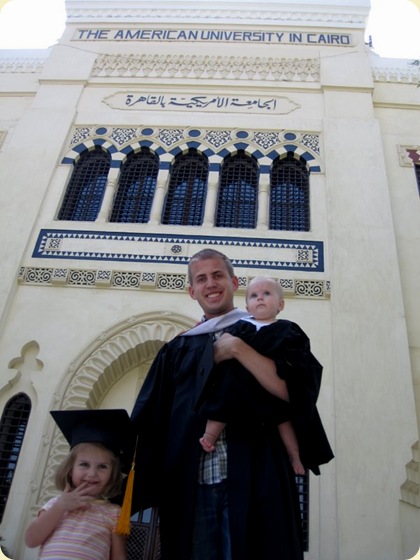 Then I took a few pictures of Andrew by himself since he’s the one who did all the dirty work. 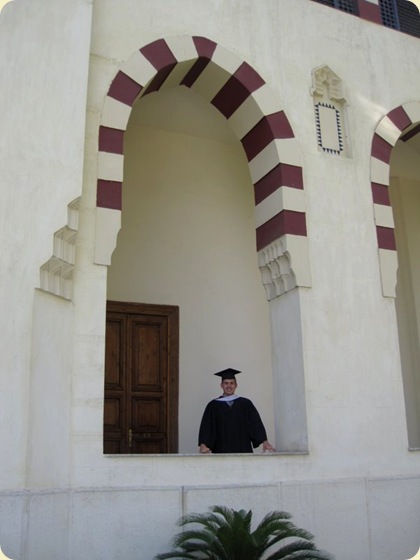 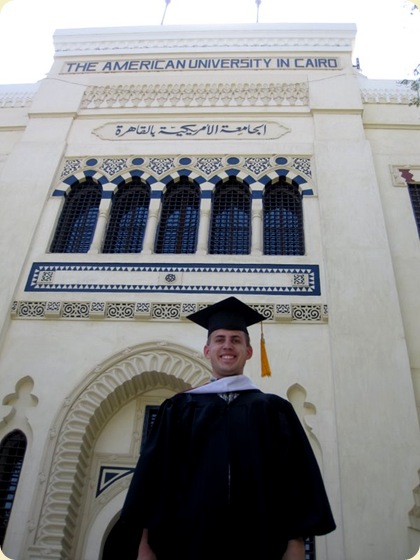 We have no clue how the hood actually goes on, but doesn’t he look good as a master? 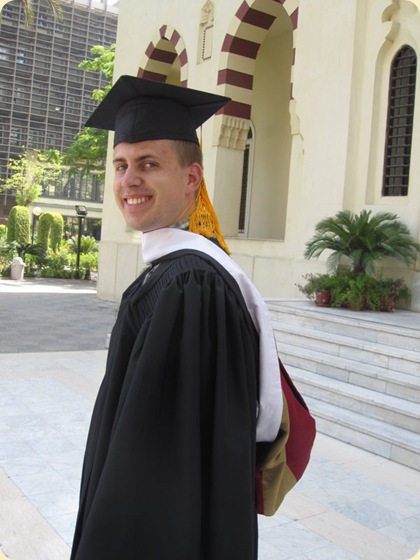 We also did a little photo shoot with Miriam, our master’s degree baby. One kid per degree seems to be our timing so far… 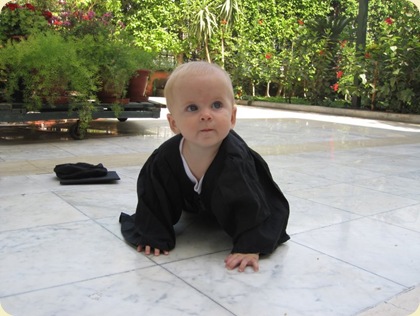 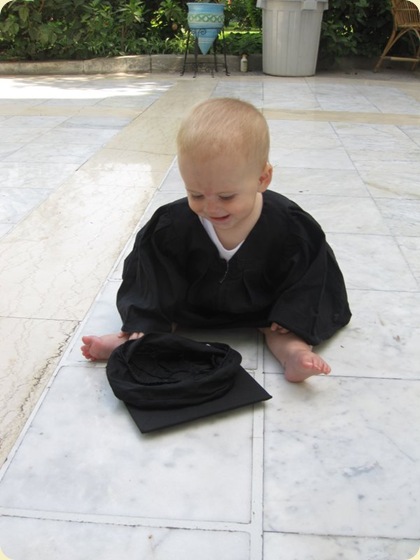 We had a few passersby stop to take pictures of Miriam in her regalia. I don’t blame them because she’s one cute baby! 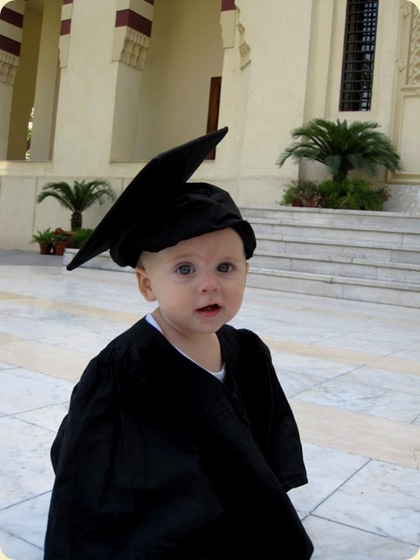 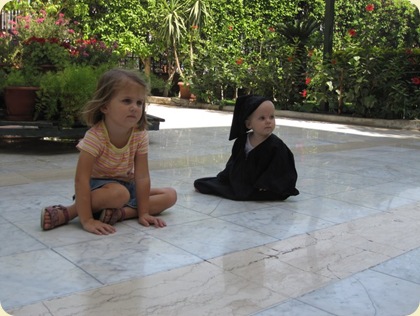 We’re sure proud of you, Andrew! Thanks for taking us on this adventure and for all future adventures because “adventure is out there” and you always know how to find it! 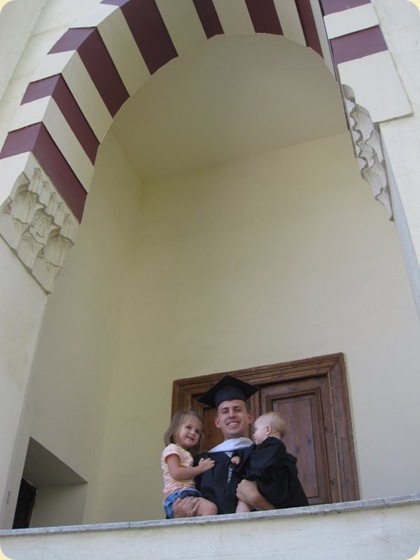