Way out by the the Giza Plateau is a little street lined with stores displaying colourful wool carpets and stylish galabias . It’s the Kerdasa Bazaar and on Sunday Josie and I joined our friends Clara and Catharine (and several other members of the branch) on a shopping spree there. 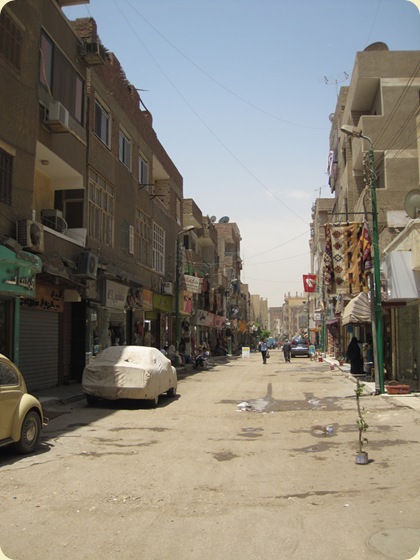 There were galabias sporting various cartoon characters, super heros, and movie stars. High School Musical, Hannah Montana, and Batman, just to name a few, but pretty much anything you could think of could be found screened on a child-size galabias . I thought it hilarious. And, truthfully, rather lame. 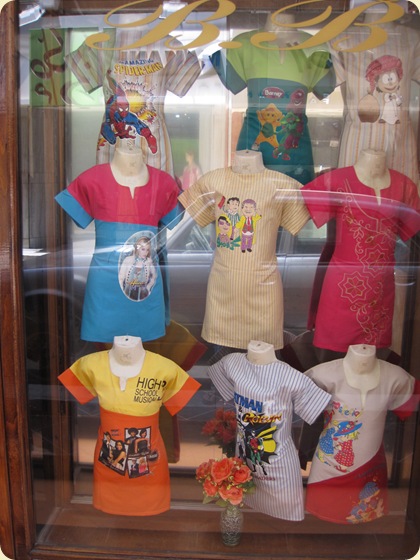 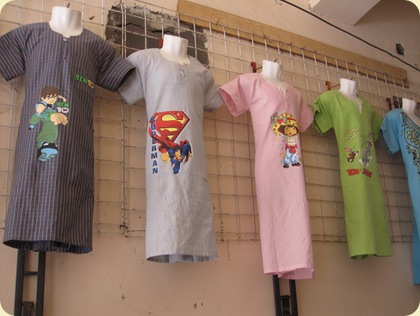 We spent a lot of time in carpet shops, doing our best to appraise wool carpets to get a decent price. None of us actually knows much about carpet appraisal, but Jill was able to impart some of her knowledge to us. Carpets with thinner weaves take longer, Persian carpets are typically knotted and not woven, etc. 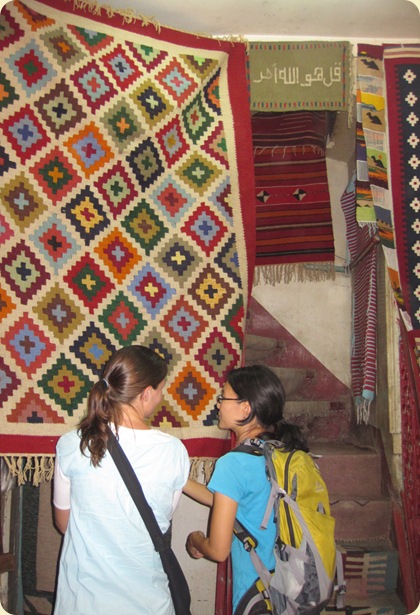 I wasn’t too interested in purchasing carpets since we have limited suitcase space and since I don’t have anywhere to put carpets yet, but it was sill fun to look at the bright, beautiful, and sometimes humorous carpets. 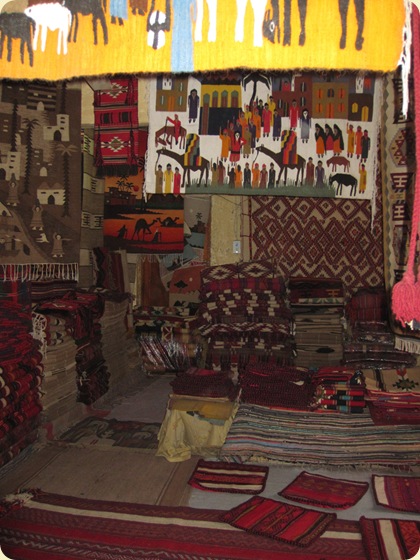 Josie and Clara were partial to this carpet since the faces of the villagers look like Ghostface on Scream. I’ve never seen Scream and probably never will, but I definitely recognized the ghoulish faces on these people. 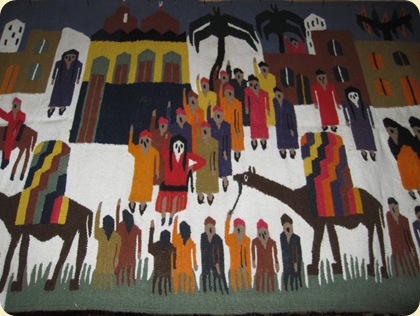 Shirlee, Catherine and I were laughing about the rug in the middle. I named it Meta-Rug because it’s a rug…about a rug store. 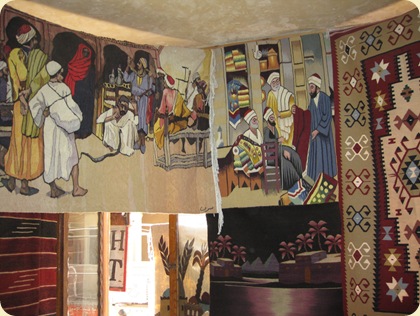 Later, while we were wandering around scoping out galabias and abayas we saw Kate Hudson. Apparently she models Islamic clothing in her spare time.

I was happy to find some children’s clothing. I’ve been looking for abayas for Rachel and Miriam for quite some time but haven’t ever been able to find any. And then it was a whole nother* trick to find some without goofy characters screened on them. 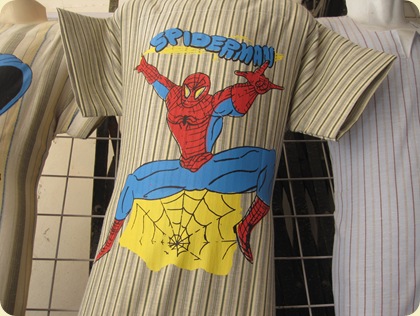 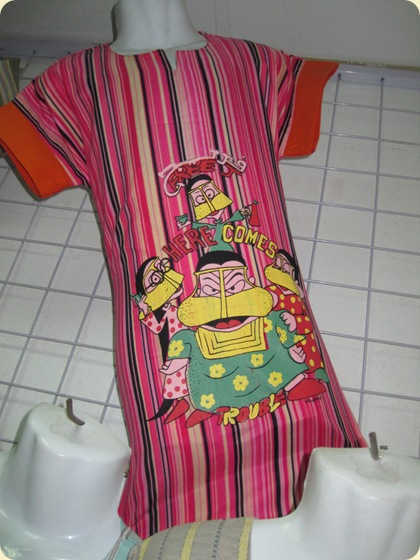 Eventually I did find some that I liked. And that didn’t have giant hippos in niqabs on the front.

Kerdasa is very shaby in the Arabic sense of the word;that is to say, it’s traditional. All the women I saw were veiled and after the call to prayer sounded, the mosque we walked past was so full that a section of men were being led in prayer out in the street. 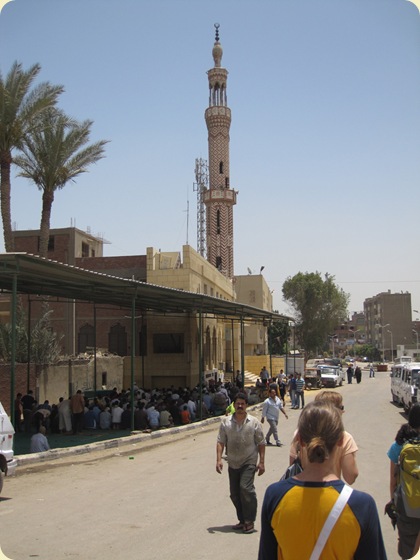 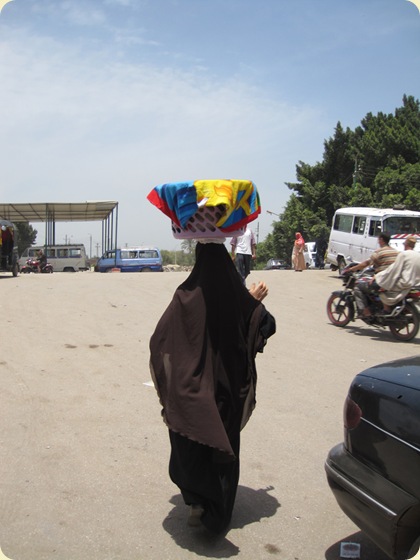 It was a fun outing and Rachel was thrilled to try on her abaya when I got home. She had been running around shirtless all day due to the nasty sunburn she earned at the beach. Andrew spent all day lathering her with aloe vera gel. Anyway, she was right ready to squirm into the abaya the minute she saw it, so I helped her into it and she ran around the house showing it off to everyone multiple times.

I sneaked off to the bedroom to nurse Miriam. It’s been difficult having company all the time since I don’t feel comfortable nursing publicly and Miriam doesn’t always like to be covered up. We compromise sometimes by secluding ourselves in the bedroom.

While I was nursing Rachel came in and said, “Mom, since I’m wearing a galabia I think I need the face-thing, too!”

I put down (a now very angry) Miriam (how dare we interrupt her meal?!) and helped Rachel with a niqab. She thought it was awesome and left it on for about half an hour, dancing around the house and being silly in general. 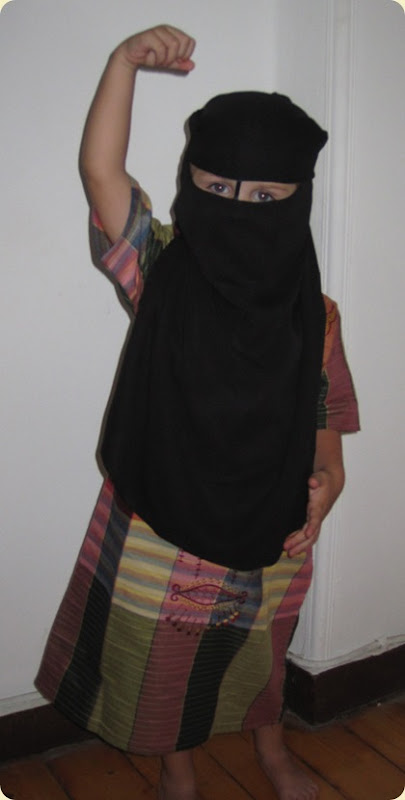 I’m glad she’s finally liking the idea of “dress-ups” because she’s been so adverse to wearing anything out of the norm. I suppose, though, that she might not be over her fear of “costumes,” per se. It might just be that she accepts this as normal. In fact, I’m willing to bet that she does. And I’m okay with that, though I’m not sure how Kate Hudson feels about it.