We’ve visited Dar es-Salaam twice with Josie. I wanted to get Andrew a nice galabia before we left and had come across a store that had ones I thought he’d like—I just didn’t have him with me to try them on so I had to bring him back to it. We decided, while we were getting his galabia to get some more traditional clothing.

Isdals—full khimars, or head-style abayas—have been becoming increasingly popular here in Cairo. I started noticing them last year sometime, but I don’t remember seeing them much before. But there they were, for sale. I got one. And it took me forever to find out what it was called. It’s not a chador because there are openings for the hands and it has snaps to hold it together. It’s not a khimar because it goes all the way to the ground, not just to the waist. It’s not a burqa or abaya since it rests on the middle of the top of the head and needs a niqab to cover the face still. So I guess it’s an isdal.

The women working at the store gave instructions to Andrew while I was trying on the isdal, telling him that I only had to wear it outside and not to make me wear it in the house, etc.

When we mentioned that Josie wanted to try a niqab, the girls were shocked.

“She’s much too young for that!” they insisted, “Let her try a regular tarha* first and if she likes that then she can move onto the niqab when she is engaged or married. One step at a time.” 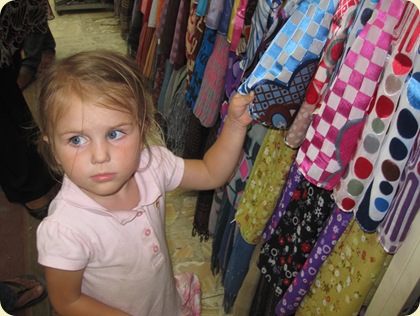 They seriously didn’t want her to buy a niqab. So I got one for me.

Since I was married it was okay.

When we were walking down the street a little later Josie and I were talking. There was a donkey cart in the middle of the road laden with gas canisters. I started side-stepping it but Josie was so lost in the conversation, however, that she didn’t. I called her attention to it just in time to have her come to a screeching halt mere inches from running head-on to the donkey, who was standing as still as a statue. He didn’t even blink. Josie did much more than blink—she shrieked and jumped out of the way. It was quite hilarious.

I think I’ve written far too much today so I’ll leave off with some lovely treasures we found at a shop in Dar es-Salaam. 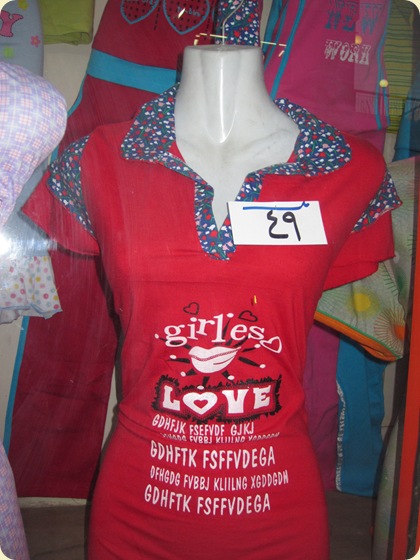 GDHFTK FSFFVDEGA? Does that look like someone just pounded out random letters on the keyboard? I thought so…

This next shirt is just “gewwet!” 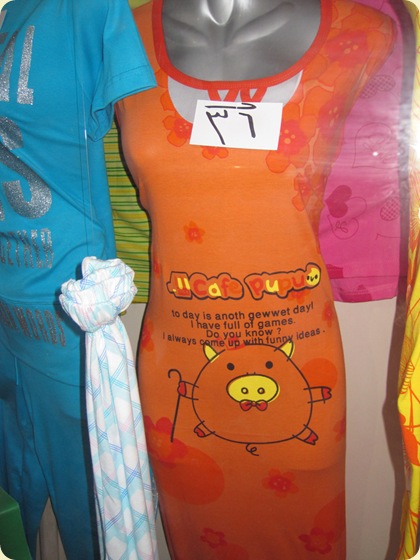 Cafe Pupu: to day is anoth gewwet day! I have full of games. Do you know ? I always come up with funny ideas.

In case you’re wondering if we’re waiting to replenish our wardrobe until after we return to the States, the answer is yes.

*Tarha is slang for hijab, a headscarf.