Andrew’s dad and I sent a chain of emails back and forth a few days ago and our conversation kind of ended with him saying, “So, you are in Cairo, unemployed, not in school, and homeless. Andrew has done well for you….”

That basically sums up our life, yes. But we’re not worried. We have a plan of sorts.

We’re all moved out of our apartment and have been staying at our friends’ place—they are in the States on home leave. Rachel keeps asking two things. 1) Where’s Tuesday? Tuesday is her friend who usually lives at this place and whose bed Rachel is sleeping in. 2) Is this our new home? No, it isn’t. 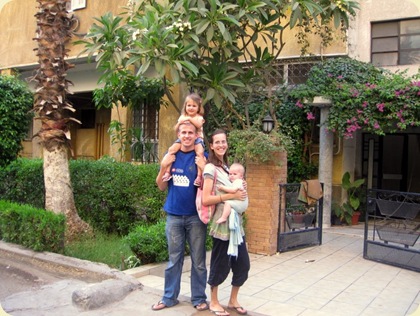 We had a wonderful evening and when we were leaving, Jamie asked us if she could give us a ride home.

Rachel turned to her quite confused and visibly disturbed. She choked a bit and managed to squeak out, “Ummmm, we actually don’t have a home anymore.”

So, there you go. We’re homeless, jobless, not in school, and stuck in Cairo…at least for a few more days when everything will change again. I kind of feel like we’re in The Princess Bride. You know the part where Vizzini yells, “And you: friendless, brainless, helpless, hopeless! Do you want me to send you back to where you were? Unemployed in Greenland!”

We’re not friendless, though, since we’re staying at our friends’ house with some other friends and just had dinner with previously mentioned friends at a different friends’ house. See? Plenty of friends.

We’re not brainless because Andrew just got his master’s degree.

We’re not helpless or hopeless because we have plenty of both.

And we’re not in Greenland.

So it isn’t like The Princess Bride at all but you catch my drift.