Slave Castles, Jungles, and Crocodiles (May 7)

We woke up fairly early this morning to get an early start on one of the busiest and most jam-packed days of the whole trip, gallivanting around the Cape Coast/Elmina area of Ghana.

Our first stop was the Cape Coast slave castle, one of the few remaining castles in West Africa. Ghana has 3ish left: Cape Coast and Elmina are both used as well restored museums, while one in Accra is used as the presidential palace (odd way to use an old slave castle…). A few partial ones are scattered along the coast.

The castle was originally built by Scandinavians in the 1600s, but was quickly taken over by the British as the conquered the Gold Coast. The British used it as a colonial outpost and residence for the London-sent governor, who oversaw the traffic of merchandise (mostly slaves) out of the port and into the infamous Triangular Trade. The castle was both fascinating and heart-wrenching. How could humans treat other people literally like cattle (or worse)?!

Before descending into the slave dungeons, we spent some time in the courtyard of the castle, taking in the beauty of the building and the ocean below. The castle’s museum was extremely well done, probably because it was curated and organized with support from the Smithsonian. The while-walled castle reminded me (strangely) of the Pirates of the Caribbean trilogy, which I watched on the flight over here. The British ports on the western side of the Atlantic were built and used at the same time as Cape Coast. They actually all formed different parts of the same triangle. 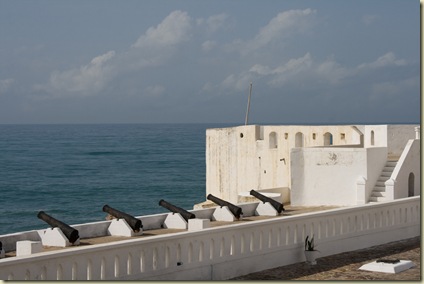 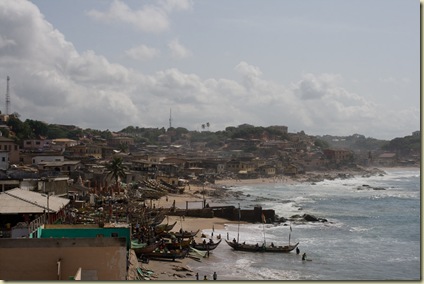 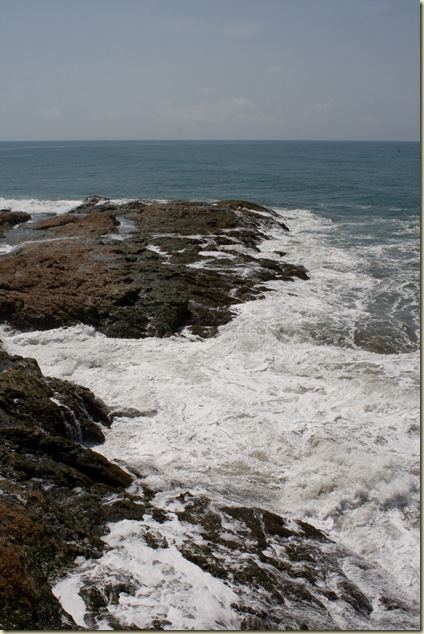 Beneath the beautiful white castle lays a dark, dank hell. Millions of Africans were taken and sold into slavery over 3ish centuries—it’s estimated that 15–17 million were taken from their homes, but that only 10 million actually made it to the New World. Although the US was one of the last to abolish it completely in the mid 1800s, and although we have the idiotic legacy of Jim Crow and segregation, the majority of slaves taken from Africa actually didn’t end up in Virginia, Mississippi, or Georgia. Only 6.45% of the 10 million slaves that actually survived the castle experience and Atlantic crossing went to British North America. 38% of all African slaves actually went to Portuguese Brazil.

Our tour guide took use down a steep rock tunnel and led us to the main dungeons where the male slaves were kept. Because of the shipping schedule, shipments of slaves left Cape Coast every 8–12 weeks, so outgoing slaves spent up to three months in the same dungeon. Each of the dungeon cells held up to 300 slaves, who were thrown food from an internal window above. Because the room was so crowded, many were unable to move during their stay in the castle.

There were no bathroom facilities beyond a shallow and narrow trench running through the middle of the room. Most of the time slaves wallowed of fecal matter (and all the diseases that accompany that). Biological traces of all that still remain on the walls and floors, and scientists found that the level of human waste ranged from 6–8 inches.

The dungeon had only one tiny window to the outside. Lots of slaves went blind from being in the dark for so long. Consequently, I couldn’t get any good pictures—even with flash on, it was really hard. Luckily someone put one up on Wikipedia (but note all the super high ISO noise… it’s that dark down there). Imagine 300 people stuffed in this room, mushing around in a pool months-old poop, in super hot tropical weather. Slaves who rebelled (which probably happened a lot, considering the conditions they were in) were taken out and thrown into a smaller dungeon off the main courtyard, where they were kept with no food or water until they died.

Oh yeah. Guess what was built right on top of this main dungeon? The first Anglican church in Ghana. Yeah. British colonialists went to church on top of hundreds of tortured, dying slaves.

Once we were in the main dungeon chamber, our tour guide turned off the few light bulbs strung overhead and left us in almost complete darkness. He led us in Amazing Grace and then had us observe a brief moment of silence. It was powerful.

He then led us down a tunnel that leads to the infamous door of no return—the final passage all slaves walked out of before leaving the continent forever. The courtyard of the castle slopes down to the main dock, as you can see here: 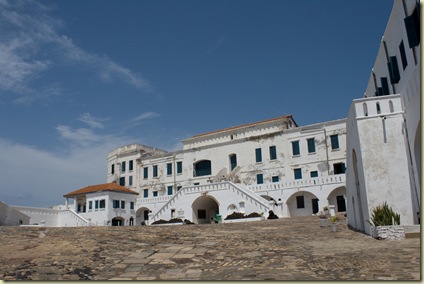 The dungeons for the women were at ground level right next to the final exit door, and were smaller than the mens’ cells. Each of the two cells held up to 150 women. Both cells were just as dark and unventilated as the mens’, but they had an extra horrible feature—doors to the British soldiers’ living quarters. Yeah. Soldiers would periodically come and choose random poop-soaked slaves, wash them, rape them, and return them to their cells. Naturally, lots of women got pregnant, and their children generally remained in Africa while their mother was (still!) sold and shipped off to America.

On shipment days, the men would meet up with the women before being herded through this door (technically a different one… after the trans-Atlantic slave trade was abolished in the early 1800s, the British sealed the main door of no return with bricks…): 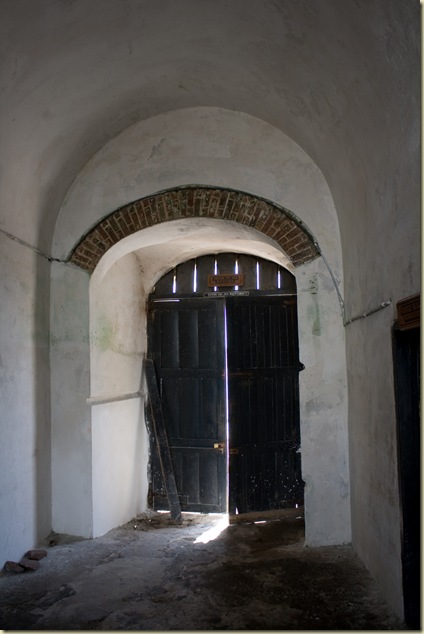 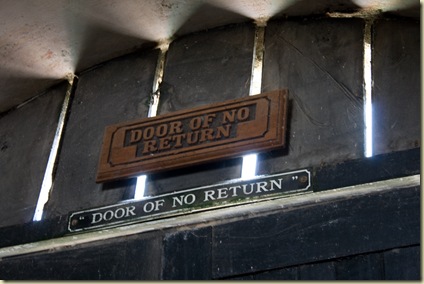 They’d then be piled into a small rowboat and taken out to the main slaving ship, where they were crammed in tightly for the long trip across the Atlantic. Once they were gone, the cycle would start all over again. Ashanti tribal leaders would conduct slave raids in local villages, refilling the dungeons in preparation for the next shipment overseas.

Surprisingly, despite the centuries of horrific crimes against humanity in Ghana, Ghanaians seem to have moved past the tragedy and show little animosity to Europeans and Americans. While the museum and the castle did highlight many of the horrors of the slave trade, much of the tour focused on moving on. In the early 2000s, two slave bodies were exhumed (one from New York and one from the Caribbean, I think) and shipped back to Ghana for a symbolic reburial. Their remains were taken through the door of no return, thus creating the “door of return.” Ghana encourages African American tourism to the slave castles to help American blacks reconnect with their roots, and tour guides love to let them walk backwards through the door of return. 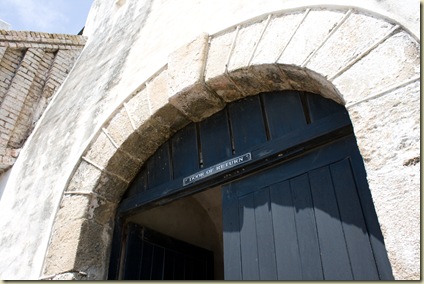 The final plaque on the way out of the castle contained a brief statement expressing “Never again” sentiments. 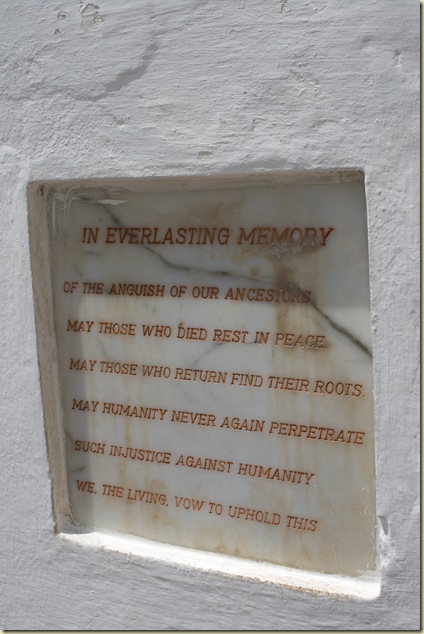 Ghana did this right. The castle struck the perfect balance between showing the horrible things that humans can do to each other while also expressing hope for the future. It was kind of like Yad Vashem in Israel, only done right (there wasn’t any feeling of “Look what the Nazis did to us, so we’re justified in doing it to the Palestinians”—that overall feeling we got from Yad Vashem two years ago…) which was refreshing. The slave castle was most definitely one of the highlights (if not the highlight) of this whole Ghana trip. 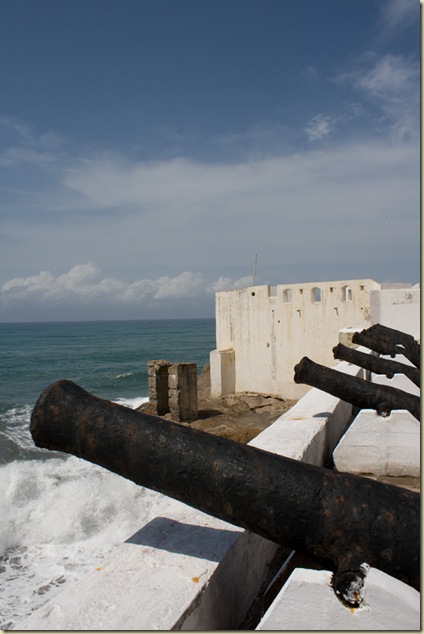 After spending a fantastic morning at the castle, we headed out of the city and into the hinterlands to Kakum National Park, home of a large tropical jungle (like the rest of southern Ghana). We met up with a trail guide (who hadn’t showered in months), who took us on a nature walk of sorts, pointing out various tropical trees, seeds, and nuts. Most of the animals in the park are nocturnal, and since we were there in the early afternoon we unfortunately missed out. Nonetheless, we still had to avoid noisemaking in the jungle. I love Ghanaian English :) 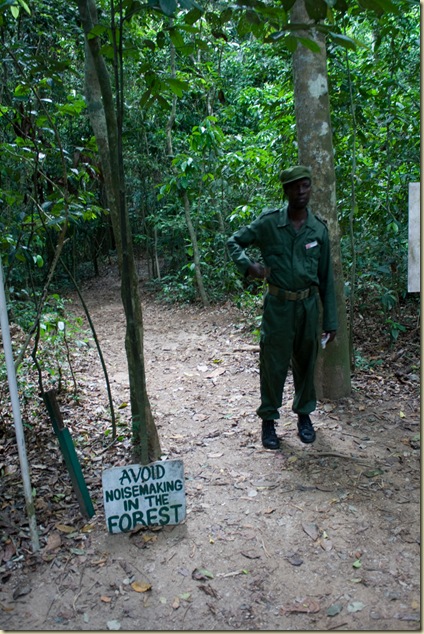 After 45 minutes of walking through the jungle, we climbed up inside a tall wooden structure, where we found a series of seven narrow rope bridges, spanning across the jungle canopy. 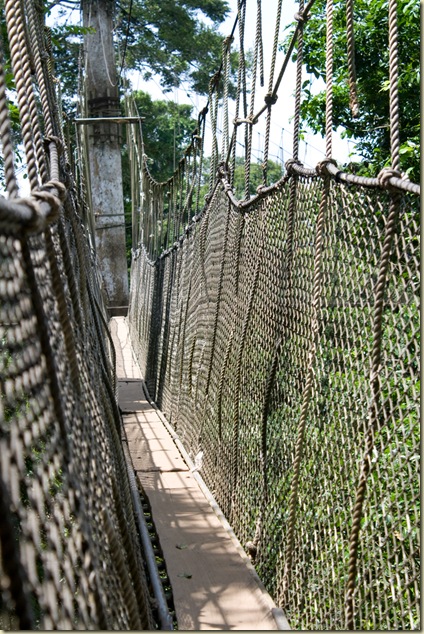 Because they’re so narrow, only one person at a time could go. For some reason our guide selected me to go first, so I headed out over the green abyss. As I stepped down on the bridge the 2x4 fell down a few frightening inches, and the bridge started swaying gently. Although it was initially terrifying, I eventually got the hang of it and by the time I got to the 4th or 5th bridge I was jokingly swaying and shaking the ropes. As a group we decided that the ultimate challenge would be to walk across one of the bridges without holding on to anything and with our eyes closed. I tried a few times, but failed miserably. A couple people in the group, I think, made it across. 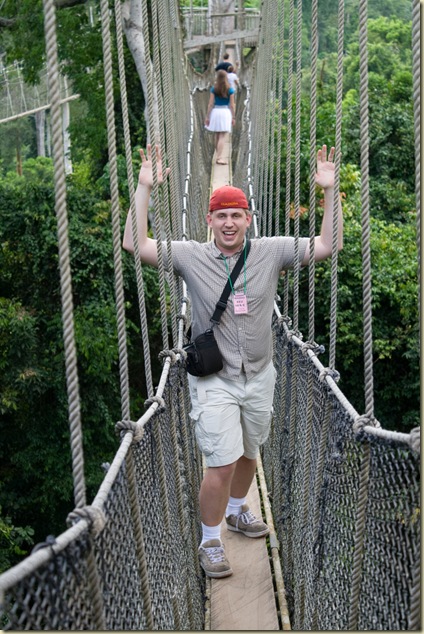 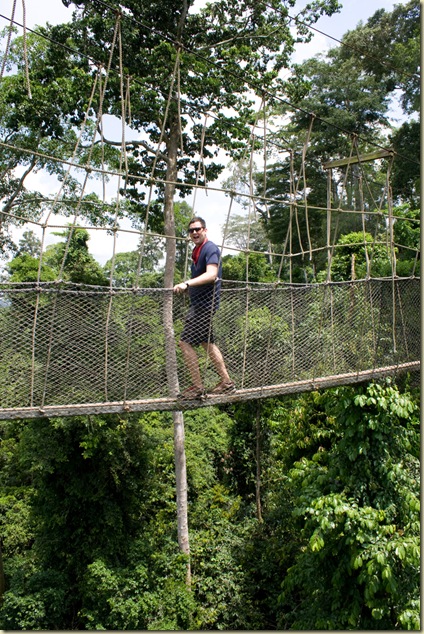 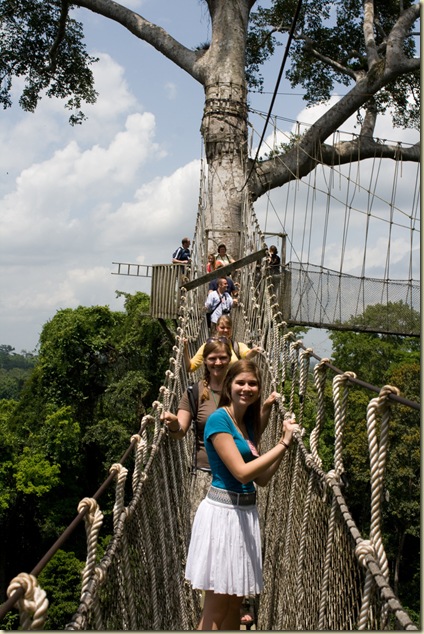 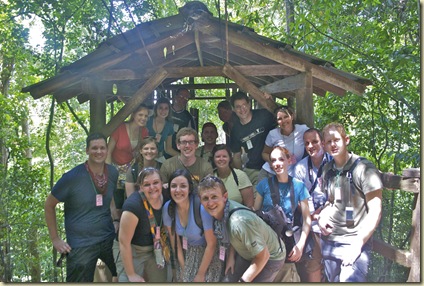 After finishing the loop of bridges and hiking back down to the bus, we sped off to lunch at a nearby restaurant. The main building was built on a small island in a large green pond teeming with crocodiles. Real crocodiles. The kind that eat things. Like people.

When we finished eating, the owner invited us to come behind the restaurant to play with the crocodiles. Five rather large and menacing crocodiles were laying around in a 20 foot radius around where we stood in the yard, which was completely unnerving. When one decided to saunter over in our direction, the owner would hit them on the nose with a stick. A tiny, nonthreatening stick was our only protection. Sometimes she put a piece of meat on the end of the stick to placate them (“Here. Eat this little bit of raw chicken. Ignore the delicious American tourists standing in front of you”). So cool. 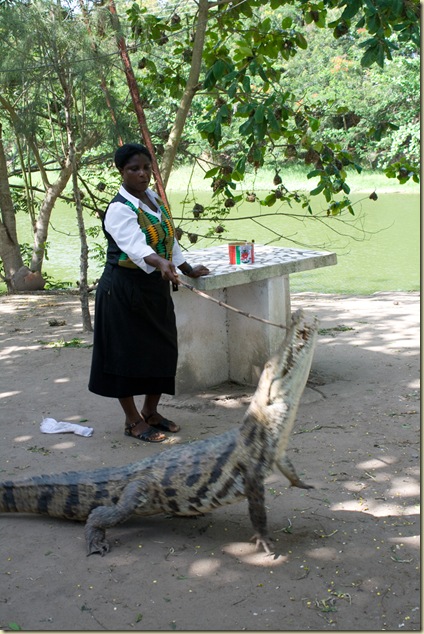 As we all took turns posing with the largest and sleepiest crocodile, the other four would slowly close the circle around us, until stick lady beat them off. One finally got tired of that and jumped back into the pond, leaving us with four crocs. 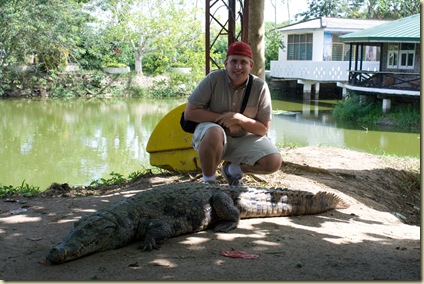 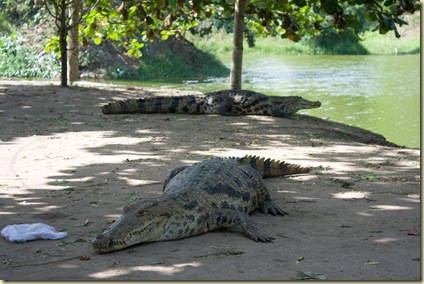 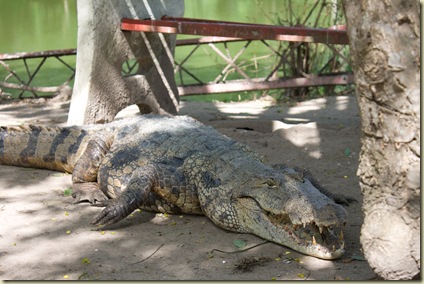 After the series of photoshoots, one of the crocodiles looked playful (I guess?), so people (Oliver, mostly) decided to pick up its tail. It obliged, so we started passing around the tail. Because that’s what you do with man eating crocodiles.

At least we had stick lady to protect us. 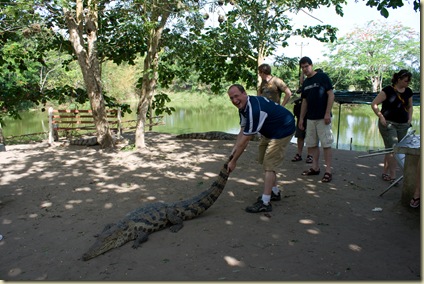 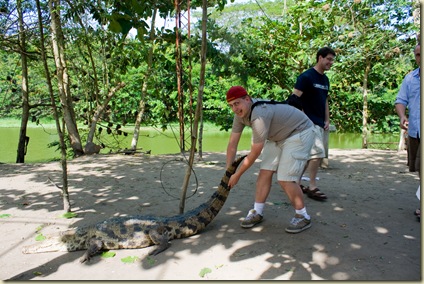 Five or six people managed to lift up the crocodile’s tail before it got sick of us and started turning its head and snapping at us, at which point stick lady intervened. The bored/angry croc sulked off into the pond, and we scurried back the bus. And we all survived with all our limbs. Phew.

We came back to our incredible beach resort by 4 PM, which left the rest of the afternoon and evening completely open. I found one of those beach bed/chair things, put it on the edge of the sand, and read and relaxed. I eventually fell asleep to calming waves and almost total silence and didn’t wake up until 6:45. Best beach nap ever.

At 7 we had dinner. Instead of having our standard buffet of rice, chicken, plantains, and scary fish stuff, once again I had my glorious kid’s menu macaroni and cheese and banana-split-in-a-pineapple.

I could stay at this beach forever.