New Life Orphanage and the Ghanaian LDS Church (May 8)

For our second Sunday in Ghana, we headed off to church again, which was fortunately a far better experience than last week’s sleepy General Conference sauna. Because Cape Coast had done their conference rerun last week, today was fast and testimony meeting, which ended up being completely fascinating. Most of the members bore their testimonies in some mix of English, Twi, or Fante, and a few Ivorian refugees spoke in French.

I was reminded of how much I like Ghanaian English when one of the members of the bishopric praised all the mothers in the congregation (apparently it’s mother’s day in Ghana today too), saying that they “discharge [their] maternal duty with great diligence, even when it must be done with single-handedness.” I feel really bad missing out on Mother’s Day today, leaving Nancy home alone with the girls, but she’s a fantastic mother who truly discharges her duty with diligence. This evening I was able to eke out a short Mother’s Day Skype call over this hotel’s horrible internet so I could tell her. She rocks.

Sunday School was difficult to follow. Even though the teacher initially began teaching in English, it was clear that he was struggling, and after about 10 minutes he switched into full Twi. People answered questions and made comments in a mix of English and Twi, which was the only way I could easily follow the lesson. Priesthood was done in full English and was far easier to follow and participate in.

After church we all went out to the bus to have lunch, but quickly realized that we were eating in front of all the fasting members, so we pulled out of the church parking lot and pulled off to the side of the road to eat more inconspicuously. Once we were done with lunch, the Cape Coast stake president, President Kaku, met up with us and drove us out to visit the nearby New Life Orphanage.

The orphanage, like dozens of others throughout Ghana and West Africa, was set up by an older European couple to take care of what are generically termed “orphans.” Most of the kids at the orphanage aren’t true orphans in the traditional sense of the terms—only 3 or 4 no longer have living parents. The rest of the kids do have at least one parent who is unable to take care of their kids, either because of economic difficulty, violence at home, or other circumstances. Orphanages are therefore more like long-term foster care boarding schools. Until recently, most kids stayed in these orphanages for their entire childhood, inadvertently severing all ties with their home village and family. To rectify this, the Ghanaian government has begun to mandate that all orphans over a certain age (8? 10? I can’t remember) go home for a few months during the summer when school isn’t in session. Few of the orphans actually want to go home—they love the loving confines of the orphanage and don’t want to leave their friends and family to go back to their broken homes and families stuck in abject poverty.

The mandatory summer break hasn’t started yet, so all the orphans were there and eager to play with us. Hugh and Oliver somehow had a US-based sports company donate a whole bunch of soccer balls for our trip, and as soon as we got off the bus, the boys surrounded them and waited for them to pump up the balls. The girls and younger kids swarmed the rest of us while we handed out stickers and suckers. 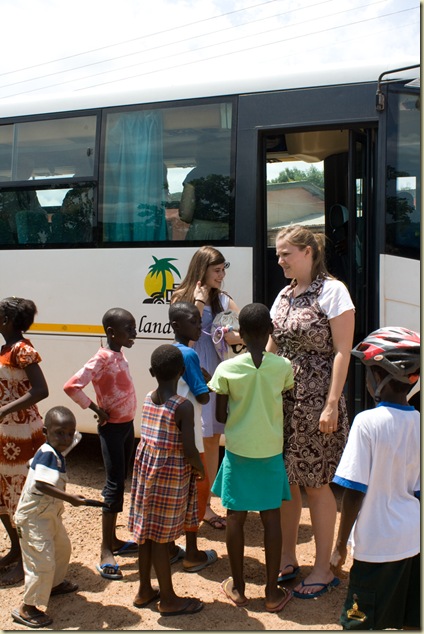 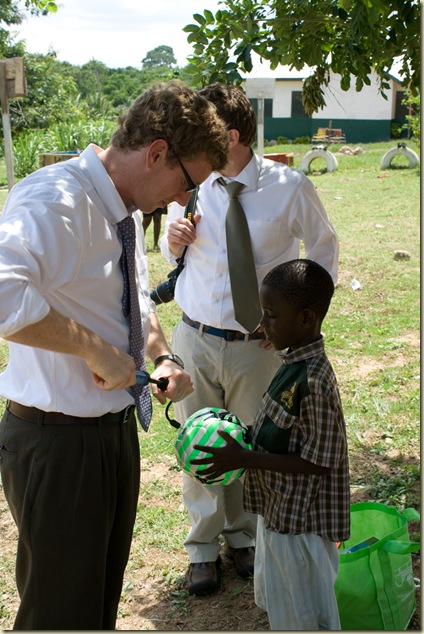 Once the balls were all ready, we played a few impromptu soccer games. 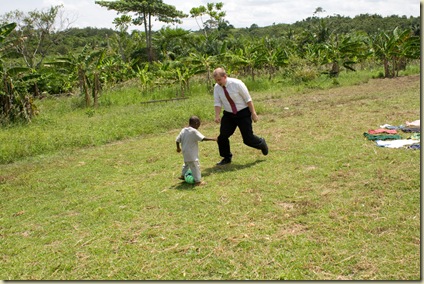 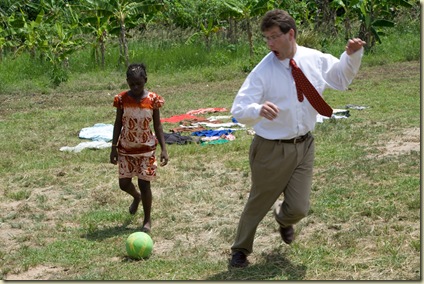 Some of the kids then gave us a tour of the orphanage, taking us into the school house and dorms and out to their jungle garden. It was so fun to walk through the jungle with the kids. 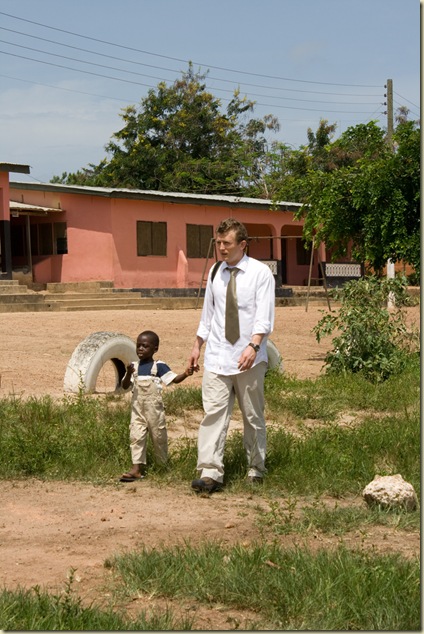 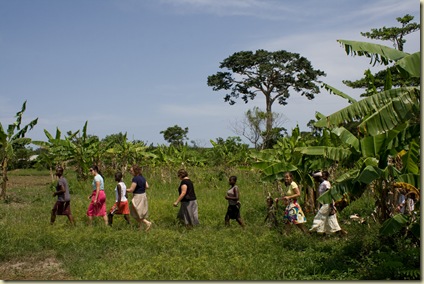 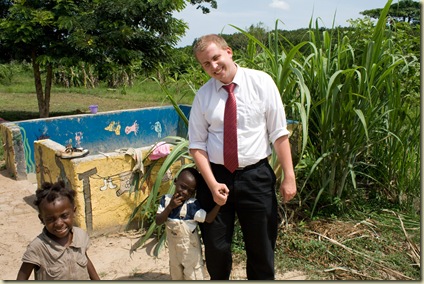 We ended our tour at the main pavilion, where some of the older girls were teaching the girls in our group (plus Oliver and Matthias) some über complicated hand clapping, elbow tapping game. 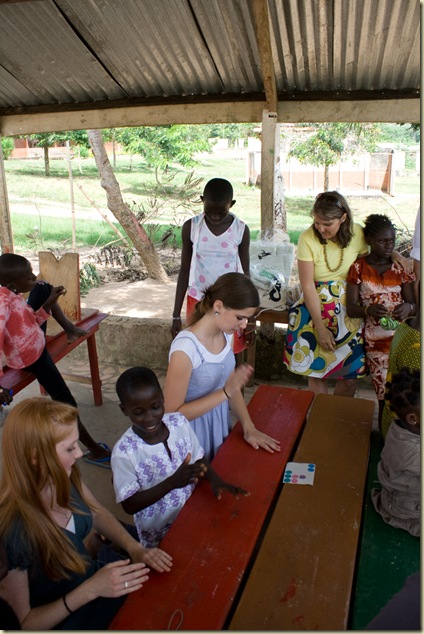 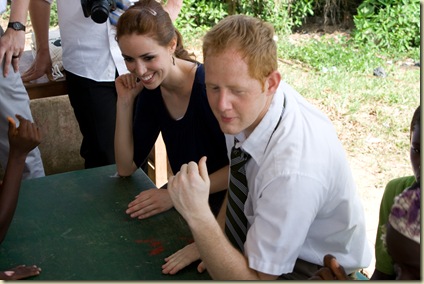 The Ghanaian girls initially sang some songs in Fante while they played, but after a few songs they started singing LDS primary songs, which was surprising, since the orphanage isn’t run by members of the Church. Apparently some Mormon girls volunteered at New Life 4 or 5 years ago, taught the kids primary songs, and left the complete CD set with them so they wouldn’t forget them. The kids have been singing our songs ever since.

After chilling at the pavilion for 20 minutes, the kids took us inside the school so they could show off some of the dances they’ve prepared for their end-of-the-school-year concert. I was expecting traditional African stuff, but to my total surprise they started playing MP3s of 17th century minuets. Eight of the older kids then started an actual Renaissance-era dance, complete with bowing, curtseying, hands behind backs, and highly formal dance moves. Awesome.

They couldn’t keep up the formality for long, though, and after a few rounds of minueting, one of the kids put on some rap. An instant dance party was born. Dozens of kids and a few energetic people from our group (namely Oliver) danced for probably half an hour, while the rest of us looked on (and apparently didn’t take any pictures… silly us).

There was even breakdancing involved.

We sadly had to leave the orphanage and head back to the hotel, where we hung out for half an hour before leaving for yet another thing (day of rest, my foot… :) ) After we changed out of our Sunday clothes, we split into two groups to visit two of the founding Church member families in Ghana: the Acquahs and the Kakus.

The Church in Ghana has an incredible history; if you have an extra 55 minutes to spare, watch Pioneers of Africa, an awesome documentary made by BYU TV back in 2003. Before the 1978 revelation that opened the priesthood to all men, regardless of skin color, the Church didn’t officially exist anywhere in West Africa (or all of Africa, for that matter). However, starting in the 1960s, random Africans came across Church literature—Gospel Principles books, Books of Mormons, missionary pamphlets, etc.—and many were immediately converted. Some started forming their own unofficial congregations. By 1978 there were thousands of pseudo-Mormons throughout West Africa, led by local pastors who had minimal contact or direction from Salt Lake City. These unofficial groups purchased land and buildings in the name of the Church in anticipation of it someday being established. Some performed temporary fake baptisms to give a sense of membership, even though they didn’t have the priesthood. All across Ghana and Nigeria there were signs and placards for “The Church of Jesus Christ of Latter-day Saints, Inc.”

One of the main leaders was Joseph W. B. Johnson, (who goes by Billy Johnson; read the link for his incredible story) who led multiple congregations throughout the Cape Coast region. He was one of the first Africans to hear of Official Declaration 2 and became one of the strongest Church leaders in Ghana.

Brother Acquah joined the Church in the early 80s, having been part of one of Bro. Johnson’s pre-Church groups. He has an incredible history in the Church (was put in prison once, helped translate the Book of Mormon into Fante, etc.), but I didn’t go to his hilltop house. Instead I went to the home of Anthony and Doe Kaku—two of the most incredible people I’ve ever met.

After the Church was officially established in Ghana in 1978, thousands lined up to be baptized, and the Church continued to grow incredibly fast. Hundreds of Ghanaians who had no connection to Bro. Johnson’s LDS, Inc. churches started seeking out missionaries. Tons of the members I’ve talked to so far have very similar stories, along the lines of “I read something about the Mormons somewhere and I knew it was the right church, so I went and found the missionaries.”

Bro. Kaku was no different. While studying at university in the mid 80s he decided to find the missionaries and get baptized. Pretty much just like that. He then went on a mission in Accra where he taught and baptized dozens of people, including a certain girl named Doe. After he finished his mission, he started dating her and he proposed marriage. She told him to wait—she wanted to go on a mission too. So she did and served in Accra like he had.

When she had finished 17 months of her mission—with only 1 month left—in 1989 Ghana’s military government decided that the Church was too rich to really be a true religious nonprofit organization, so they made it illegal, effectively shutting down all Church operations. For 18 months the Church underwent “The Freeze.” Members held Church services in their own homes, missionaries were sent home, buildings were shuttered, and some prominent church leaders (Bros. Johnson and Acquah) were arrested.

Sis. Kaku, with only one month left of her mission, was told that she could receive an honorable release and count her 17 months as a full time mission, but she felt that she absolutely needed to finish. So she waited until the Freeze was over (forcing Bro. Kaku to wait too).

18 long months later the Ghanaian government decided that they liked the Church and subsequently unfroze its activities. Doe returned to Accra for her final month. Right before returning home, her mission president asked if she would stay one more month. She agreed and ended up extending her mission for 3 more months.

After 40 (!!) months of waiting, Anthony and Doe finally got married and have been stalwart members in Cape Coast ever since. He’s currently the stake president and works for the Africa West region’s seminary and institute program as a director of sorts. They have four kids (three at home), all named after modern prophets.

Their youngest, Gordon (who is probably the funniest 5-year-old on the face of the planet) entertained us all while we sat in their small front room, eating chicken and rice. Sis. Kaku had us all tell a mini version of our life stories, including how we were converted to the Gospel (whether we were born into it or whether we joined the Church later), and we ended our awesome visit with a spontaneous testimony meeting.

So, today was pretty much incredible. The Church in Ghana is amazing. Even though it’s only been here for just over 30 years, there are 8 stakes, 3 districts, 1 temple, and thousands of members, many with stories as powerful as the Kakus. Everywhere we drive here, even in tiny villages, we see black signs with the Church’s logo, pointing to a meetinghouse. It’s almost like we’re in Utah again—it feels like there are that many churches. So cool.