After visiting with my Grandparents, we rushed home to get ready for David's farewell party. We hosted it at our house (well, Andrew's parents' house) but my mom brought most of the food, which was so nice for everyone involved because cooking is not my strong suit. I can bake alright but let's just say that everyone is much happier when I'm not the one cooking dinner.
As I suspected, Josie had a difficult time being in the backyard—she visited Lakhi's grave and mourned for a while. Today was a particularly hard day for this cat-loving girl because some vicious dog attacked Winter this morning, injuring her foot and scaring her up into a tree. Winter is anything but a wimp. Most dogs in the neighbourhood are afraid of her, not the other way around. But this dog was apparently huge and mightily ferocious. We now think it may have been the cause of Lakhi's untimely demise. 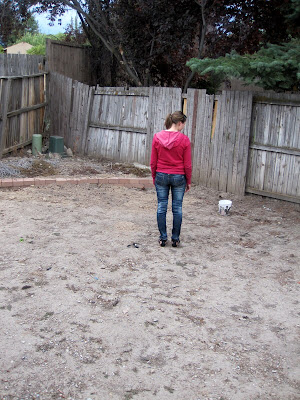 I have half a mind to track down its owners and report the animal to the city as being both vicious and a nuisance. Seriously—if it would attack our pretty little kitties what's stopping it from attacking a small child playing in the front yard? The mere fact that the dog was in my parents' yard attacking our cat is grounds enough to report the animal as vicious, I think. If only we know who owned the beast.
Anyway, the party went well. We had, if my count is correct, thirty relatives over! It was awesome though preparing for the party was, to say the least, a series of unfortunate events.
I went out onto the deck to set up all the tables and count chairs to make sure we could seat everybody and when I had arranged them just so I went inside to get the water dispenser ready. I filled a tray with ice and was using both hands to carry it outside. I thought that I had left the screen door open but apparently I didn't because I totally crashed into it. One minute I was, for all I knew, walking onto the deck and the next minute I was being bounced back into the kitchen.
It was probably one of the funniest moments of my life. And the best part was that Karen was standing in the kitchen and watched the whole thing. All I could do was laugh—long, loud, and hard.
Just thinking about it is making me giggle.
The next glitch was minor. Auntie Judy arrived first with Uncle Wally and Jacob (my cousin—just to clarify...not Andrew's brother...well, he's not Andrew-my-husband's brother...but he is Andrew-my-cousin's brother...oh, boy, is my family ever confusing). I told her I was glad that she came early because I was still trying to decide exactly how many people to set out chairs for but now that I knew only three from her family were coming I could finish arranging the chairs. That's when she told me that Mary and Tara were planning on coming with their families, and Jimmy and his new bride. I didn't know they were coming—my mom hadn't mentioned it to me—I didn't know who all was invited. But it's totally fine that they came—in fact I'm so very glad they came because a family party isn't a party for my kids without having their cousins present—but it did mean that I had to come up with chairs for fourteen more people. 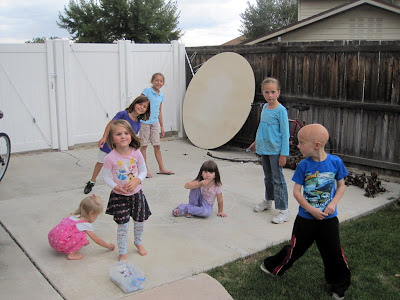 So like a good hostess I made my freshly-arrived company trek down to the basement to help cart up the folding chairs.
Then a storm rolled in, along with more guests, and we decided that it would be better to squish all the food under the roofed part of the deck, just in case. I had set up some long, narrow tables along the back wall by the house and after we pushed the ping pong table out of the way I grabbed one of the tables and pulled it toward me. Little did I know that a tray of buns was spanning the gap between the two tables. It toppled off the tables and scattered buns all over the ground.
It was another thing I just had to laugh about.
We all then got our food without further complications and took our chances by sitting under the storm clouds while we ate our dinner, ready to run inside or under the roof of the deck should the clouds decide to let loose. 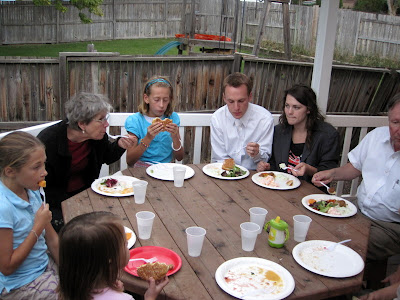 I had set up a few tables on the lawn and after I got Miriam her plate I sat her down at one of the lawn-tables while I went to get food for myself. I had made it about one-third through the line when...the sprinklers came on!

Miriam started flapping her arms and squawking like some sort of primitive creature in distress. I put my plate down (apparently on the ground but I don't remember doing that) and sprinted across the yard to rescue my baby from the bad, bad water. I put her safely on the deck and then retrieved her soggy plate.

Again, I laughed. Fortunately Miriam was the only "guest" out on the lawn when the sprinklers came on.

Next up was locating where, exactly, I had placed my own dinner. Patrick had picked it up from the floor and handed it to Andrew...not my-husband Andrew nor my-cousin Andrew (nor my-cousin's-husband Andrew) but my-nephew Andrew (I told you my family was confusing). He was trying to be helpful by telling me that he handed my plate to Andrew but really it was just confusing. Luckily only two of the four Andrews I mentioned were in attendance.

While we were all finishing up our meal a helicopter swooped down really low and beeped some kind alarm. I was half-expecting them to spray us with foam or drop rockets on us—it was just how my evening was going. Fortunately the biggest role the helicopter played in our evening was as a minor distraction for all the children running around the yard. 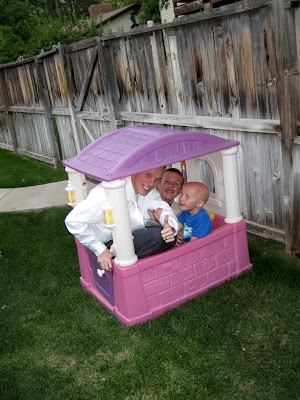 The rain also decided I could use a break and it held off until the party was just about cleaned up. The kids moved their game inside, playing dress-ups and house and whatever else. They had a grand old time while the grown ups finished visiting.

We took a picture with my mom (and my daughter wearing a gypsy dress, Rachel's church shoes, and a bumble bee hat) and three of my five siblings—I was kicking myself for not doing this while Patrick was here but then I realized that he left before Kelli arrived. One day, when my parents and siblings are all in the same country, we're going to take a new family photo—a real one. That's going to be difficult, what with my family always running off to the Middle East, Abra living in Canada, my dad living in Germany (working at an army base), and David going off to England for graduate school... 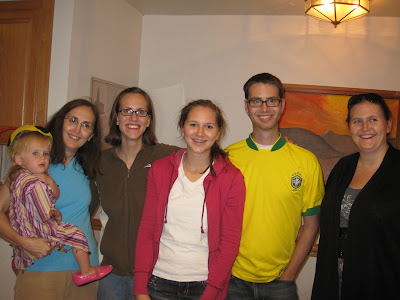 I didn't get good pictures of everybody, nor did I even take many pictures because my camera was stuck on some random setting and I couldn't figure out how to change it back because none of the menus were coming up. It was so frustrating. But I figured it out. After everyone left.

I did, however, manage to capture this little gem...even with the wonky camera settings. 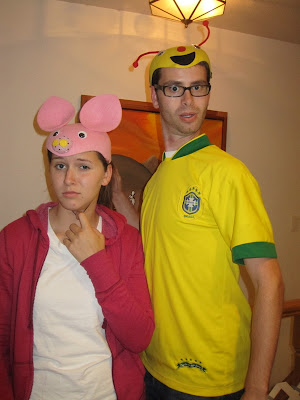 We're going to miss David while he's gone—my girls love playing with him at the playground and he's my favourite older brother in the whole entire world!
Posted by Nancy at 1:49 AM