Adjusting to life with three children has been more complicated than I'd imagined. Do you want to know what I imagined? Don't laugh.

What I had imagined was that we'd bring our bundle of joy home, walk through the door and be greeted by squealing, excited sisters. And there would be unicorns and rainbows, sunshine and daisies. And life would be eternally blissful. The end. 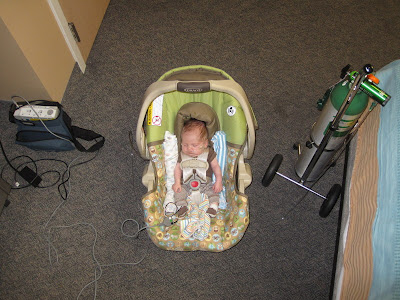 What actually happened was that we packed up our baby boy with his oxygen and apnea monitor and awkwardly got him and his gear into the car. The drive home was surreal—at long last our baby was leaving the hospital with us. That was weird. 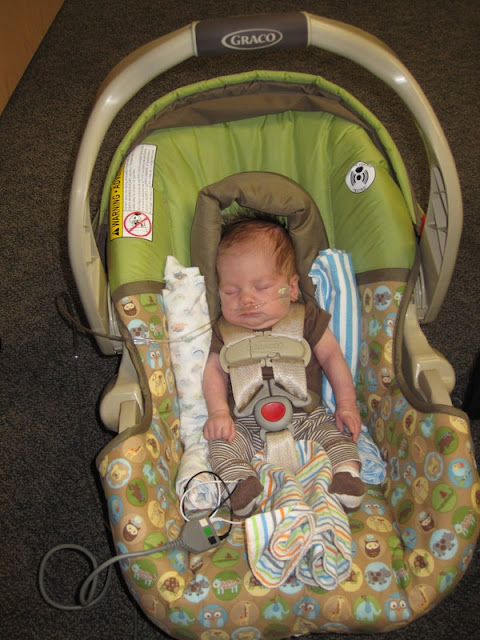 "It's his first car ride!" I cooed and then soberly corrected myself. "No, it's not. He rode in an ambulance once. I forgot that."

When we got home we walked through the door and were greeted by...no one. 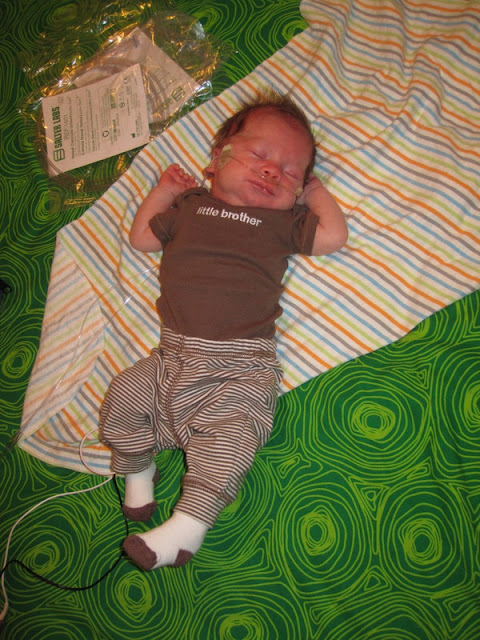 Our girls were at cousin Kayl's house having a swimming party and when they got home they were exhausted from the sunshine and water. Miriam developed a raging fever and promptly began vomiting with every opportunity she got (eg. every five or ten minutes). She lazed on my lap while our whole family sat on the bed and stared at Benjamin, now connected to his big oxygen concentrator.


It was all a little more overwhelming than I thought it was going to be and I began to wonder if we shouldn't have concocted some elaborate scheme to kidnap the nurse who escorted us to our car (sorry, Kathy, but it's true).

Benjamin was five weeks old but was just breaking free from the rigid NICU eating schedule and developing his own eating habits. He wanted to eat every two hours all day and all night the first few days home. I was getting no sleep. When Miriam wasn't throwing up she was doing diarrhea. She soiled thirteen pairs of underwear the first couple of days we were home. By Sunday night we thought she was feeling better but then she started vomiting again. Andrew took her to the InstaCare down the street who sent him to the ER where he spent the entire evening (where we got the diagnosis of nothing-we-can-do) while I tended to Benjamin and Rachel, who had also started feeling sick (though she wouldn't admit to being sick until Tuesday when she finally threw up...she was just acting a little off on Sunday night).

By Tuesday afternoon we had two girls who were constantly vomiting and/or going diarrhea and a little boy hooked up to machines—on his apnea monitor we have a radius of about four feet before we have to either unplug and move the monitor to a new location or unhook Benjamin from his leads. I was reverse-quarantined to the bedroom with Benjamin. The girls threw up and went potty and napped all over the house. I helped when I could but when you have to feed a baby every two hours and that baby is stuck in one room things are a little complicated. Grandma did more than her fair share of cleaning up messes but that doesn't mean that I didn't clean up any myself.

On Sunday evening, before the trip to the ER and shortly after I ran Miriam to the bathroom (where she threw up all over me and the floor), the Compassionate Service Representative from the Relief Society phoned to see how things were at our house.

"How are you doing?" she asked.

"Well, Benjamin is home but he's still on oxygen and..." my voice broke and I started sobbing.

I managed to choke out, "Can you just talk to Andrew?" while I shoved the phone at him before I broke down into a big, ugly crying fit. It was all too much! Two children violently expelling their stomach contents every ten minutes and a baby I wasn't even sure I could take care of.


So, that's how our first two days at home went. There were no rainbows or unicorns. There wasn't a single daisy. There may have been sunshine but I don't think I even managed to look out a window.


The view wasn't all bad, though. After all, this was mine: 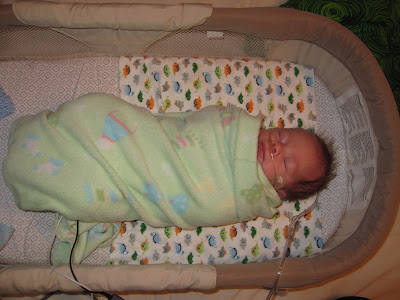 Stay tuned for more pictures and more stories. I actually managed to collect some—you know, between wiping bums, washing vomit-soaked towels, and nursing a newborn!
Posted by Nancy at 12:40 AM