I keep thinking that my tears have all dried up, that I'm finally getting used to things, that I'm handling things well. And then the weekend hits and I turn into Old Faithful. The reason the weekend is so awful, I think, is because it's when Benjamin gets older.

Sure, he gets older everyday. But by the time Sunday rolls around he's a whole week older. It happens every Sunday without fail. Andrew and I will look at each other and one of us will say, "X weeks ago you went into labour," or "X weeks ago Benjamin was born," and it opens a flood of memories—horrible memories—of Benjamin's birth. The terror of realizing that our half-baked baby was coming too soon. The panic of realizing our baby really could not breathe on his own. The grief of saying goodbye before he was loaded into the ambulance. The loneliness of sitting in the hospital with no little baby to take care of. The thrill of finally being discharged and walking out of the hospital...to drive to another hospital...to finally hold my baby. The nervousness of feeling his tiny, fragile body next to mine. The fear that I would never be able to take care of him. The desire to have him home and healthy...or, better yet, to not have him here—to still be pregnant.

But Benjamin is getting closer to being home with us everyday. I said the weekends are difficult and this one was no different. I cried a lot on Friday. And Saturday. And Sunday.

On Friday we went in for the 10 AM feeding, as per our usual, and the nurse said that Benjamin was ready for his 12-hour request, which meant that I would feed him every three hours for the next twelve hours. The nurse had given him a bottle at 7 AM and he had taken it all so she was confident that he could do it and she cleared it with the nurse practitioner who was supposed to see him that day. We were excited because the 12-hour request is followed by the 24-hour request, which is followed by 24-hours of on-demand feeding, which is followed by Discharge Day!

Then the nurse practitioner came in to talk to us. Benjamin had had a few episodes of bradycardia during his 12-hour request; sometimes those episodes happened during feedings but sometimes they happened when he was in his bed resting. And that day wasn't the only problematic day.

She pulled out his charts and showed us the page where they've been recording all his bradycardia episodes. There were multiple pages worth of bradys. He had had up to seven bradys a day that he hadn't been able to recover from on his own.

"That is a lot," she pointed out and then went on to tell us that he wouldn't be able to go home until a week after his last episode of bradycardia. A WEEK!

I will admit that I was angry. Why had they even suggested that we do the 12-hour request when he had already had two bradys that morning?!

The nurse practitioner ordered a PCG5 test to hopefully help us discover the root of his problem but he would have come off the prevacid he'd been on for his assumed reflux problem (which they thought might be causing the bradys) for several days before he could do the PCG5 (because part of the PCG5 involves sticking a probe down the infant's throat to collect data on the acidity of their spit up and prevacid is an antacid and would throw off the results). The test was scheduled for Monday.

So all of a sudden we went from going home on Monday to having a test scheduled on that Monday...and not being able to go home until at least a week after that. If they could find a way to help Benjamin stop having bradys.

Our hopes of going home were dashed to pieces. I was all tears. With his track record we'd be in the NICU until he was 50!


The following day he would hardly eat a thing. I cried every time I looked at him.


Crying in the NICU is magical because—at least so far—every time I've cried in front of a nurse they just happen to announce that I'll be meeting with the occupational therapist. So, Saturday night we met with the occupational therapist. We coaxed Benjamin to eat and then kept coaxing him but he wasn't going to take another lick. So we weighed him and he had completely gorged himself. And then we talked.


The OT decided that the 12-hour request wore Benjamin out. He obviously wasn't ready for it since he had been having so many bradys and to top it all off they had taken away his oxygen and his prevacid and he simply couldn't handle it all. So, Benjamin would go back on oxygen. We'd still do the PCG5. And perhaps he'd be ready for a 12-hour request later in the week—but we certainly wouldn't start it with a bottle given by a nurse (they usually save the option of a bottle for the last feeding in case the baby is too tired to nurse; we can't figure why the nurse decided she could start a 12-hour request with a bottle before getting the okay from the parents or attending physician...but whatever). We love our occupational therapist. She made things seem less dour somehow but we were still rather crushed.


Benjamin did alright on Sunday. Not great, but alright. He had a couple of bradys in the morning—and since I knew (now) that we had a seven-day countdown from each episode I saw the bradys as a black mark on his record. I always knew bradys weren't good but no one had explained that they were something that would potentially keep us from going home.


We took some pictures of Benjamin looking so big and alert compared to how he looked four weeks ago. It's hard to imagine that he's so big...and so small. He's growing out of his preemie clothes—he's tall—but is far too small for newborn clothes. His cheeks are chubbier—in fact, he's a little less skeletal all over—and his skull has rounded out nicely (it was freakishly unfused when he was born; like his whole head was one big "soft spot"). All in all he's growing up to be a handsome young man. 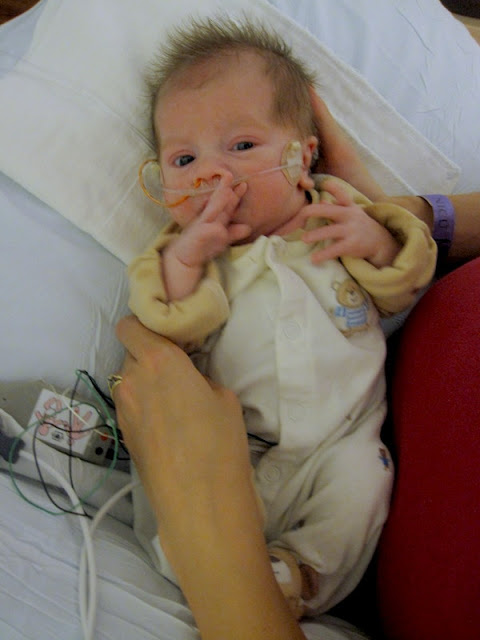 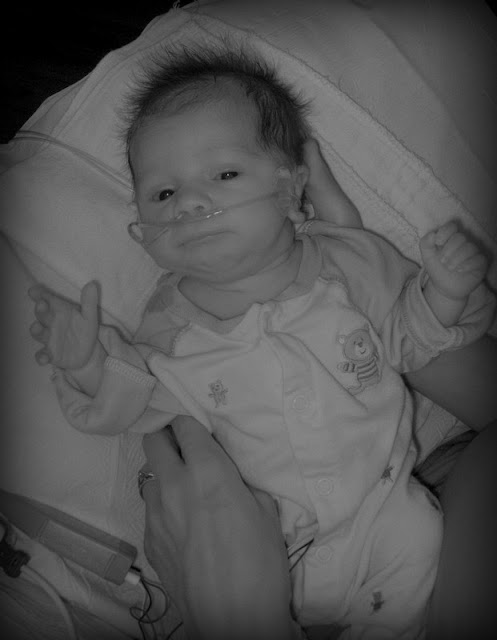 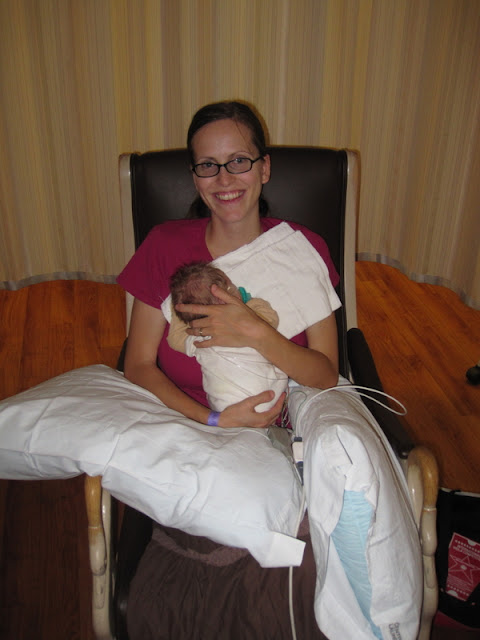 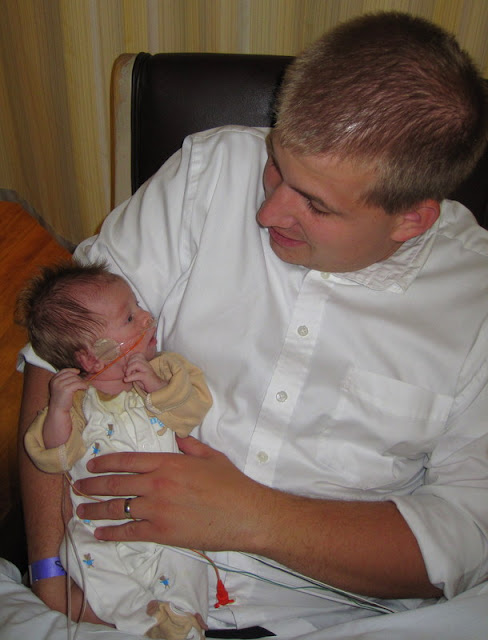 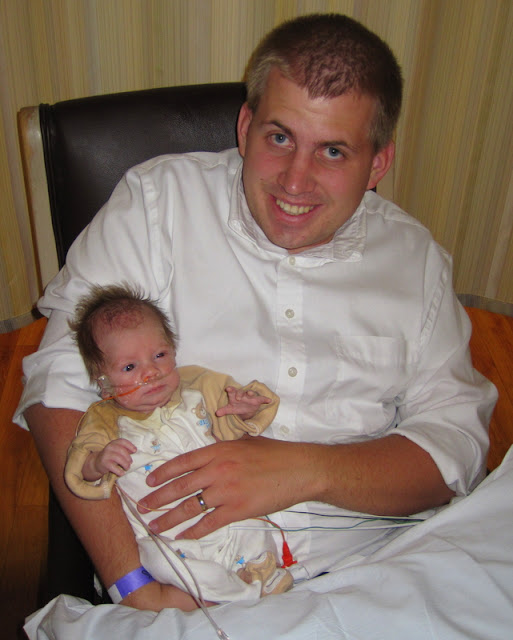 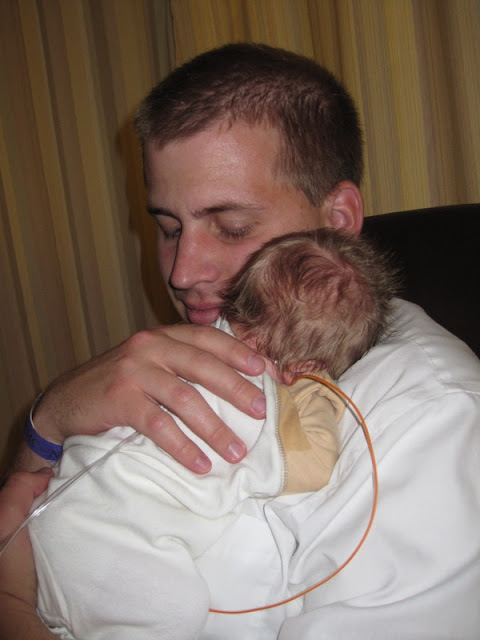 Oh, and the OT helped us figure out how to nurse with his nasal cannula on. We're basically pros now, even though Benjamin still hates having it on his face—they eventually moved the stickers up higher on his face so that he couldn't pull the cannula out of his nose because he was yanking it out with every chance he got! 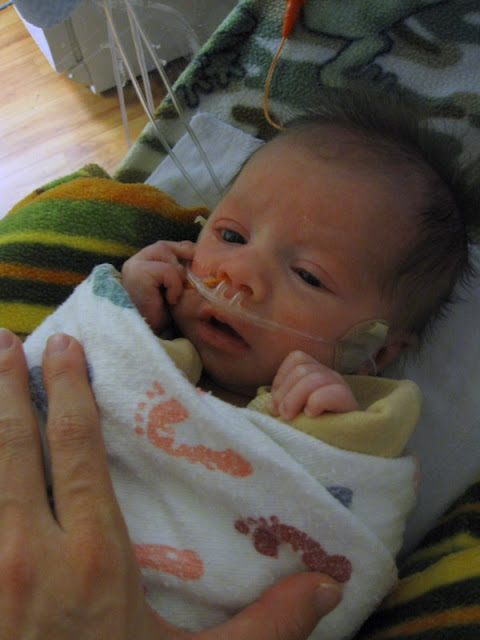 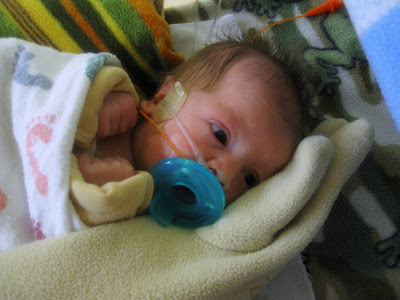