I think if I can just catch up to the present I'll be able to get back into blogging like I used to. We'll try it.  Ready to hear about the past two weeks? Here it goes...

A package came in the mail, all the way from California. Inside were some dolls made by a girl from Grandma and Grandpa's BYU ward. They were made to look like the girls and Grandma made matching skirts for the girls (which they opened on Christmas). It just so happened that Miriam was wearing her skirt when her doll arrived. She was thrilled when she noticed how well they matched. 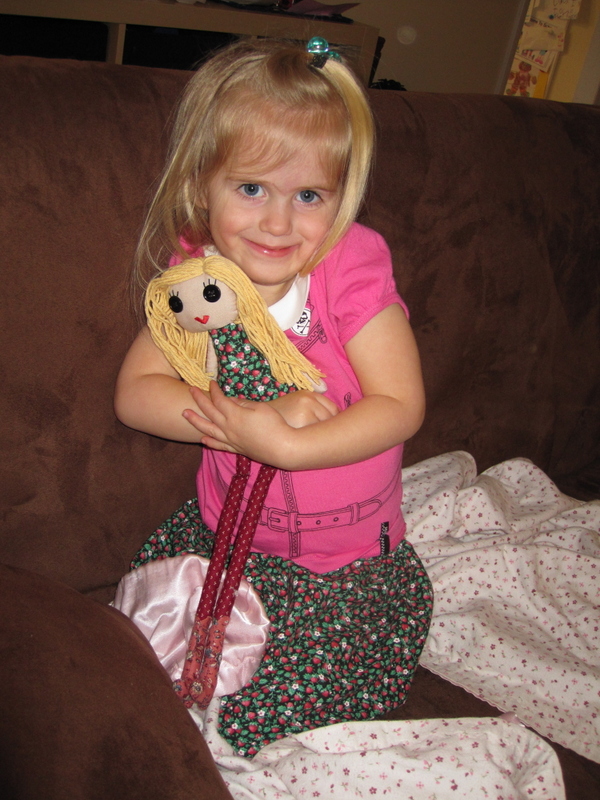 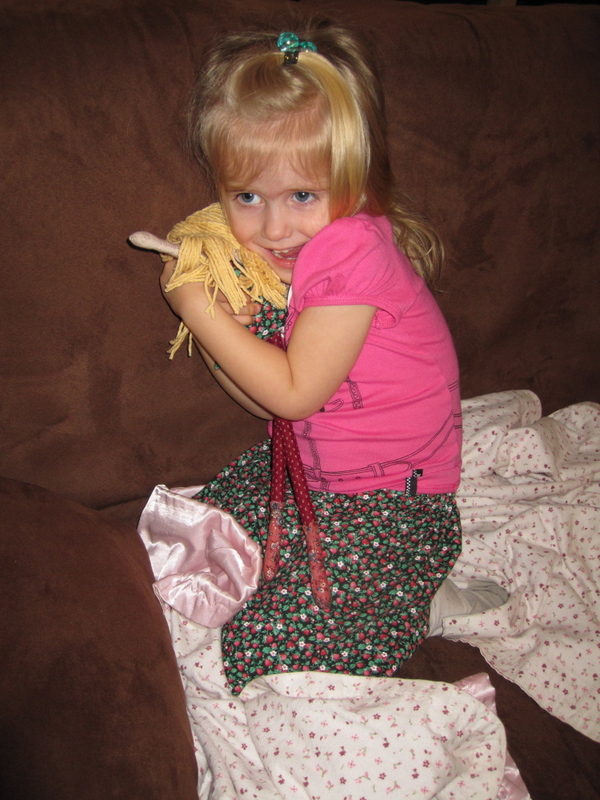 Rachel was equally excited, though I didn't get a picture of her with her doll. Later I will, I'm sure.

Benjamin is experimenting with movement. He can roll pretty much anywhere he wants to and he squidges around a bit but crawling doesn't look like something that will happen for a while. We've been practicing sitting up, too, and he's not too bad at it. This picture was taken as he's in the process of falling over (but trying very hard not to): 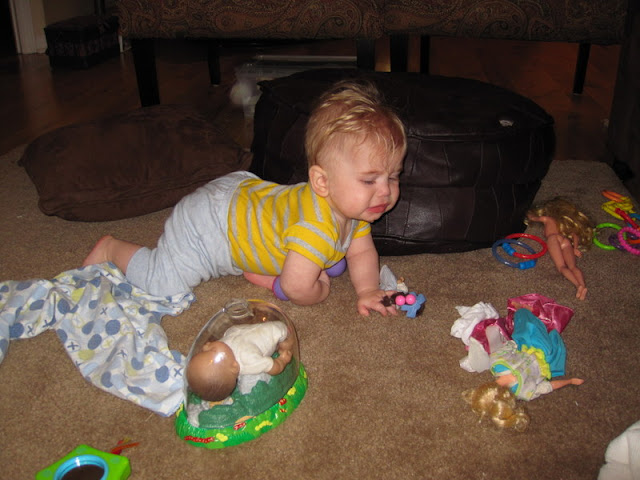 He was playing dolls with Miriam, obviously.

I gave the girls haircuts last Saturday night. Miriam's hair has never been cut (I did cut her bangs a couple of years ago but she's never had an actual haircut) and her ends were so baby-fine that they kept getting tangled and were pretty mangy-looking. When I suggested cutting hair, Rachel asked to go first so that she could show Miriam how these things are done. So I gave Rachel a little trim... 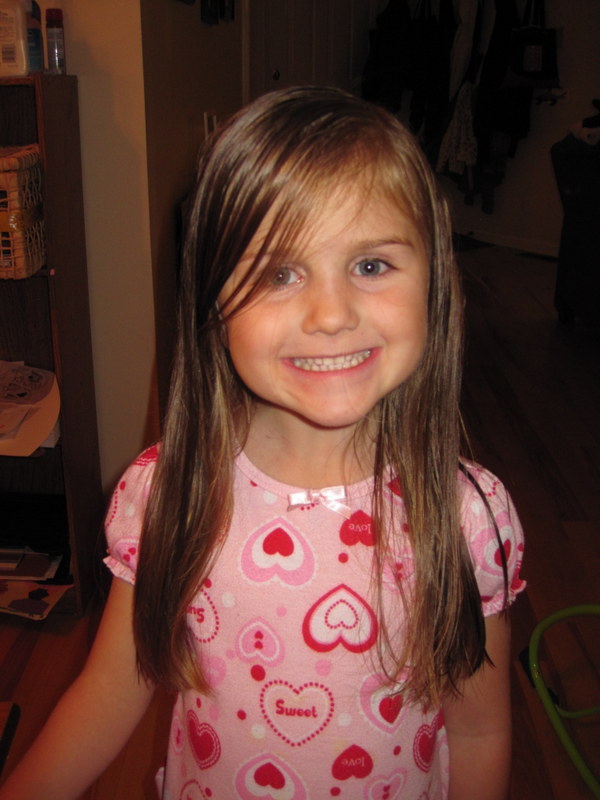 And then I gave Miriam a little trim: 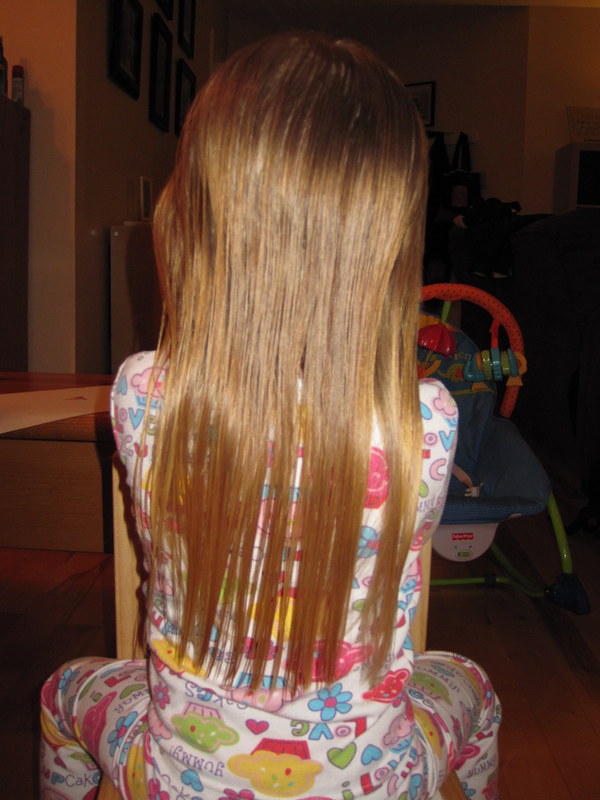 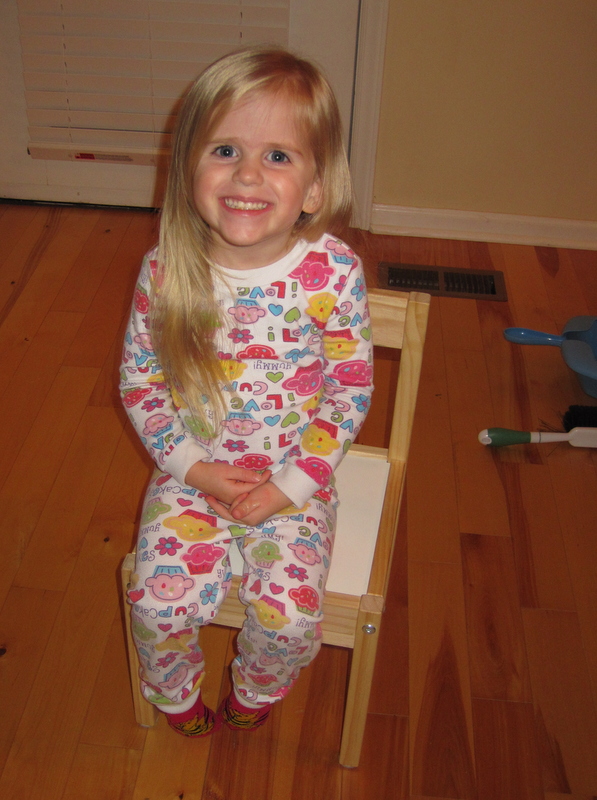 The girls wanted me to give Benjamin a haircut, too, but considering it took me 3 years and 3 months to cut Miriam's hair I think it's a pretty safe bet that I wasn't ready to cut Benjamin's hair. It's so soft and fluffy and I really don't know what I'm going to do when it comes time to cut it. 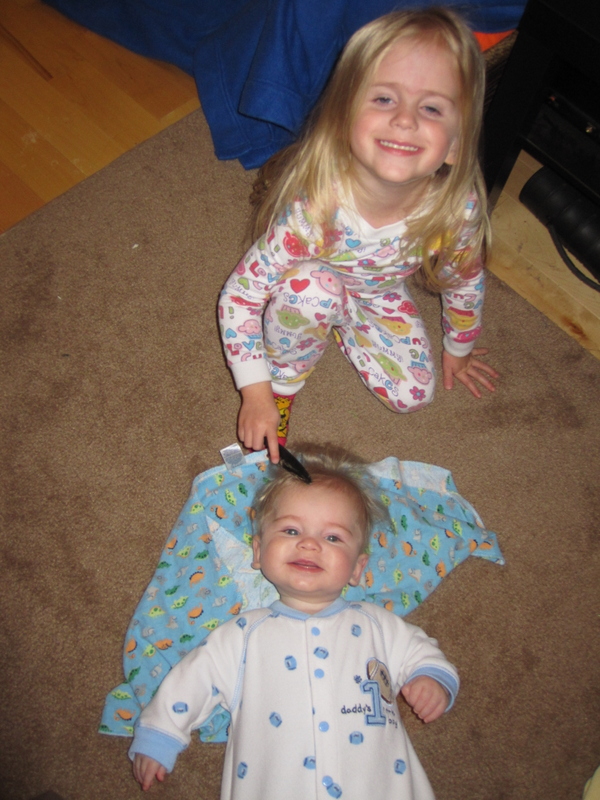 And there will be a time. He's got a reverse mullet going on—he's party in the front and business in the back.

The girls combed it until it was much fluffier than usual so we took some silly pictures of him. We can't decide which one is our favourite so I'm putting them all up. Of course. 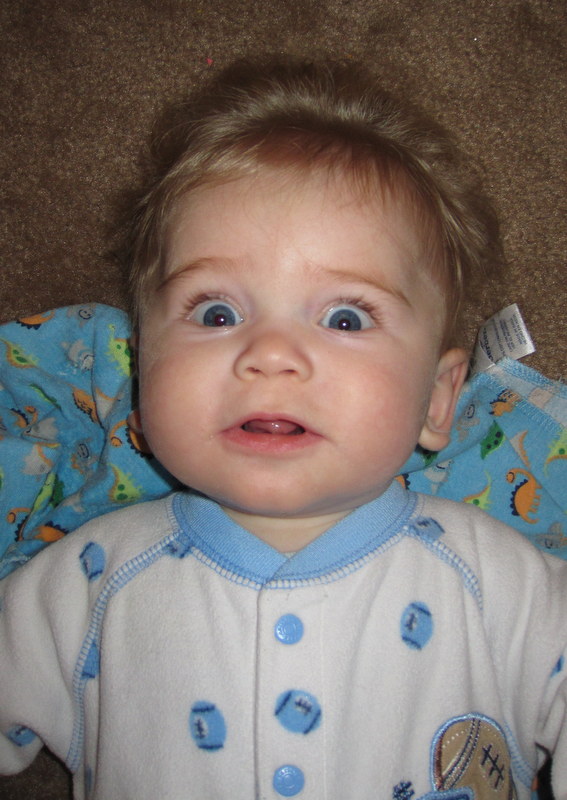 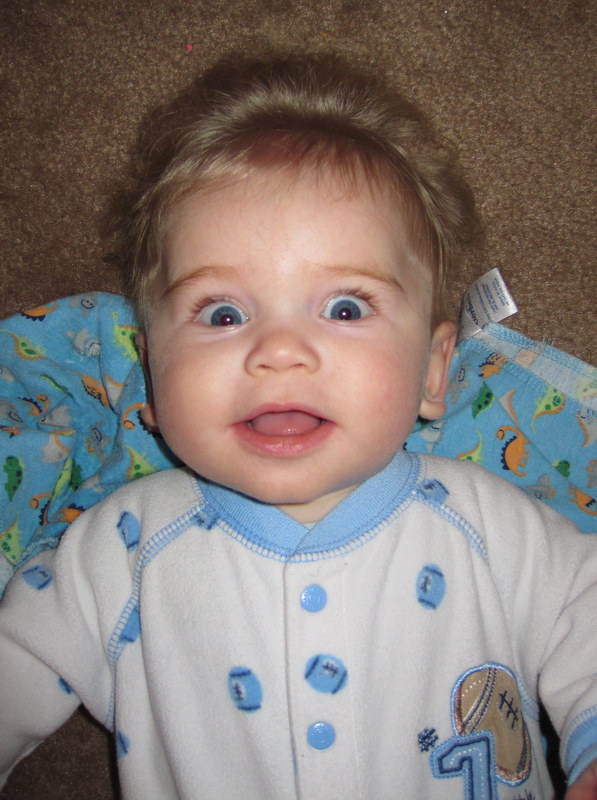 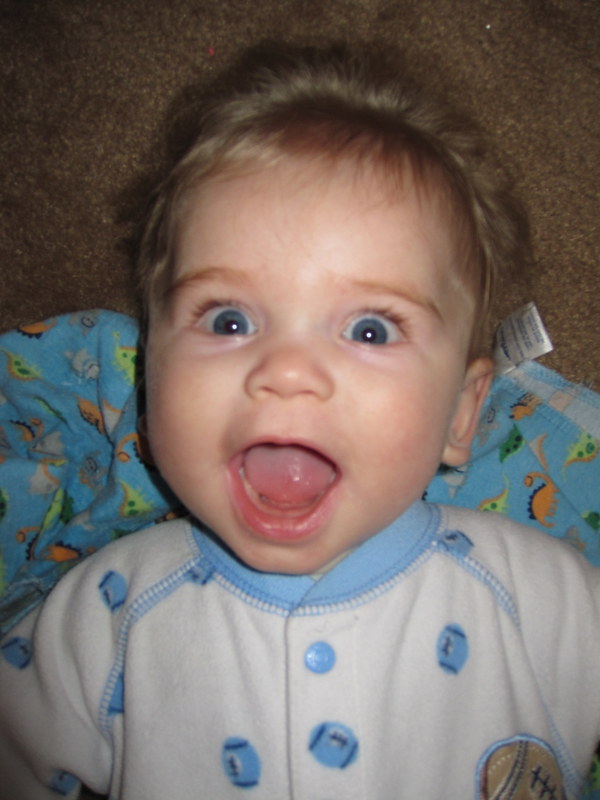 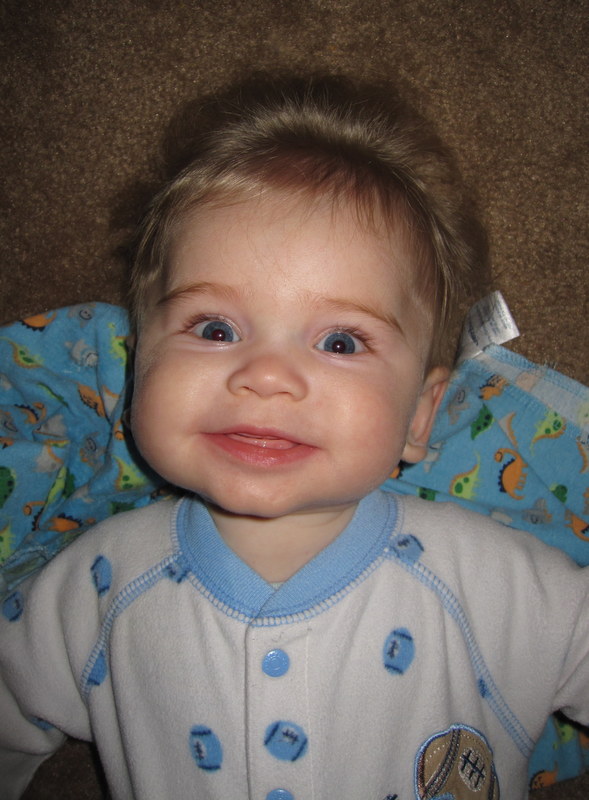 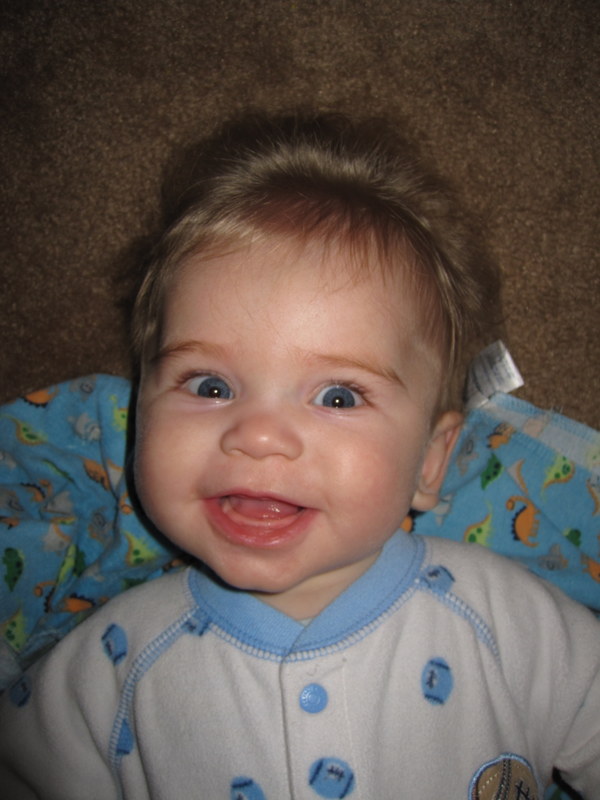 He's such a ham for the camera!

Here he is practicing sitting up again. He really does okay at it, I promise. We just only happen to have pictures of him falling over. 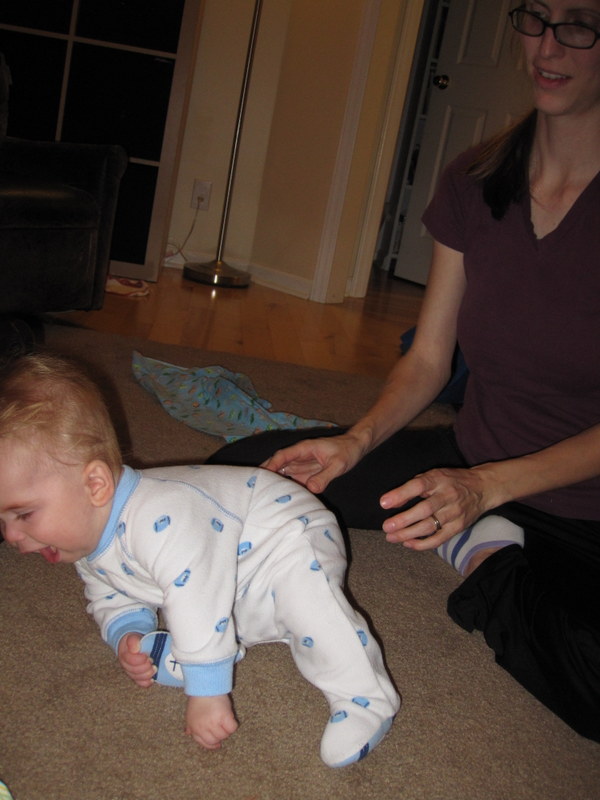 No, wait! Here's a good one. See how steady he is? 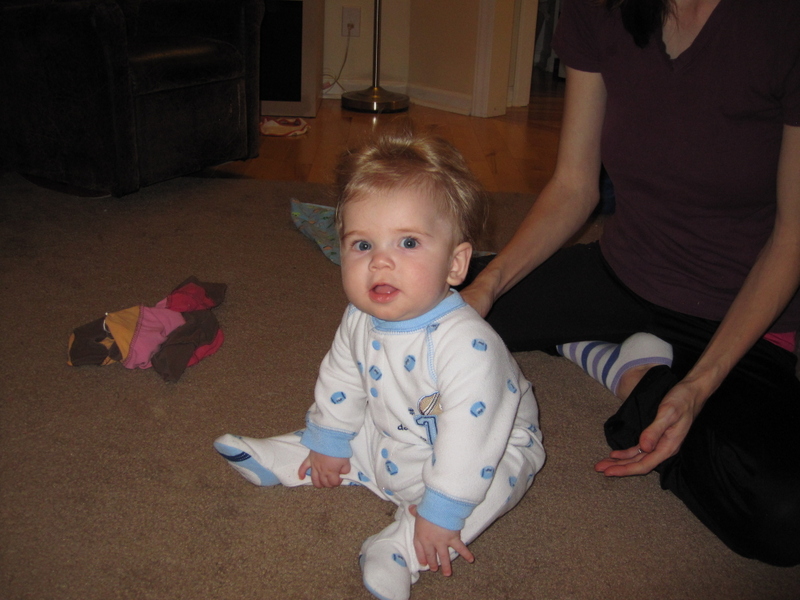 Story time, it seemed, was too long for Miriam (last Saturday). She zonked out while we were reading Little Town on the Prairie and Rachel covered her up like this: 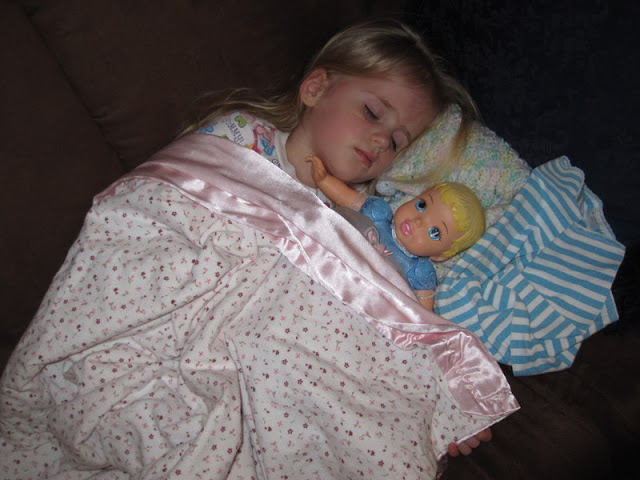 Little did we know, it wasn't just that she was exhausted from the day. We found out that she was getting sick. She was alright on Sunday but started a fever on Monday and has been sick all week.

During "rest time" on Sunday Miriam took a long nap while Benjamin and Rachel played dolls: 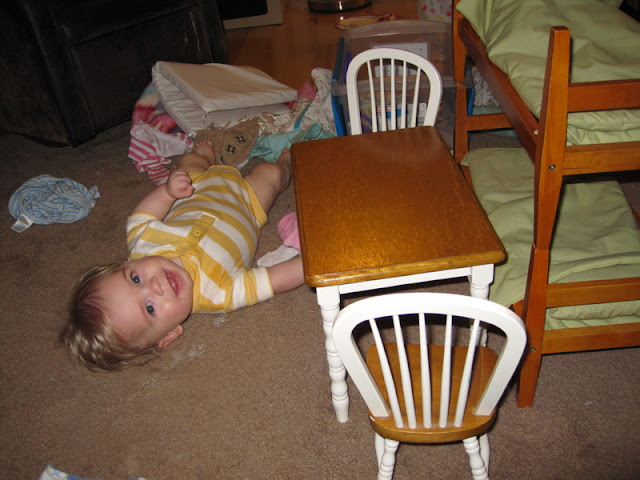 She woke up feeling cranky but seemed to be healthy so we went ahead to a friend's house for dinner. Where she played quite happily the entire time. By Monday afternoon, though, she was burning up and so, so sad.

Because of how sick she got last year I was so nervous about her fever this year. Fortunately we live in a state where there's a nurses hotline that you can call anytime and the nurse will give you medical advise over the phone. A novel idea, a wonderful idea. (Utah—take notes because I can't tell you how many times it's infuriated me when I call in and you tell me to just bring my child in. The last thing I want to do when I have a sick child (or three sick children) is to drag them to the doctor's office/instacare/urgent care/ER and sit and wait for five million hours for you to tell me the proper dosage for tylenol.)

Her fever got up to 104 a couple of times but never got past that and we were able to keep her hydrated, which has managed to keep her out of the ER, hallelujah! I think she's finally on the mend, though she shared her germs with everybody else.

No matter how many times we tell/show/remind her to cover her cough (with her elbow pit) she keeps coughing wherever she pleases. This week that happened to be all over everybody's faces. Often it was all over Benjamin's face because when we were able to beat her fever down the firs thing she'd do was start playing with and cuddling that baby brother of hers (and coughing all over his face).

There wasn't any warning, either. One minute Benjamin would be playing on the floor by himself while Miriam was moaning on the couch. 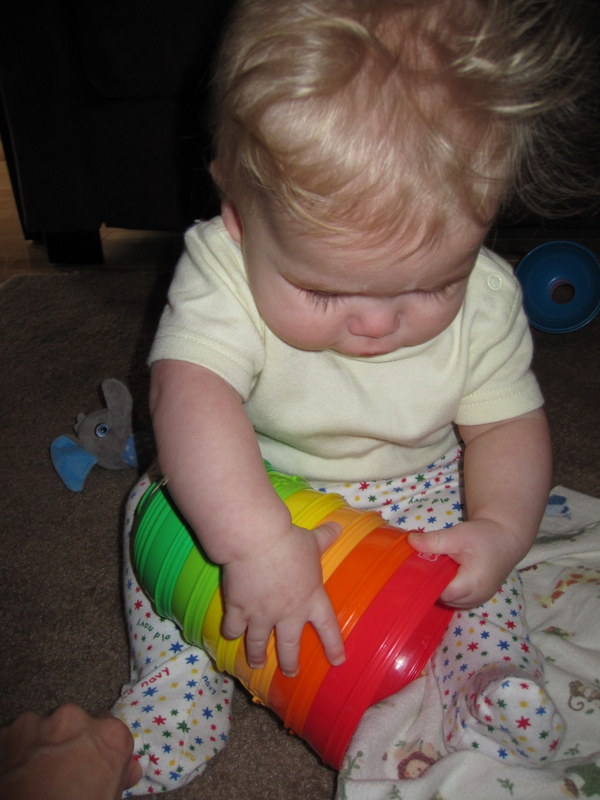 The next minute her tylenol would kick in and she'd be on the floor with him, grabbing, touching, kissing... 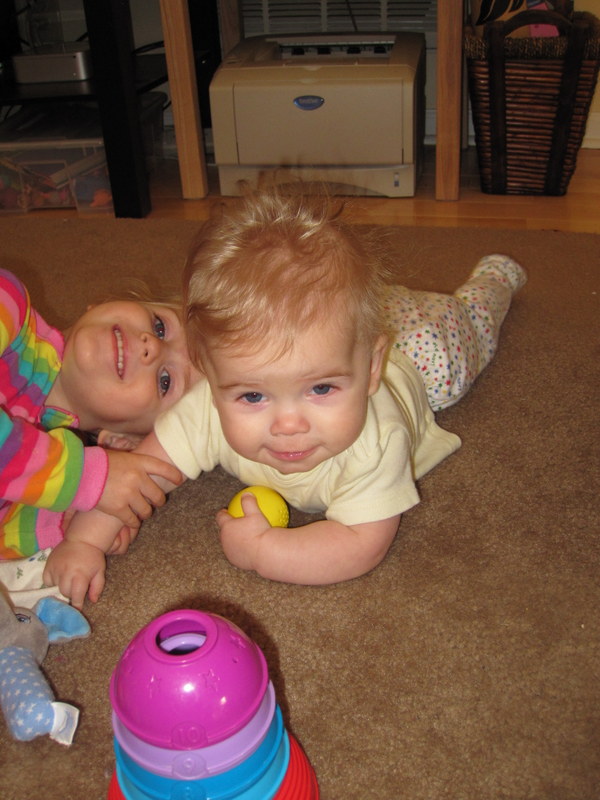 He didn't mind much because he loves to play with his sisters... 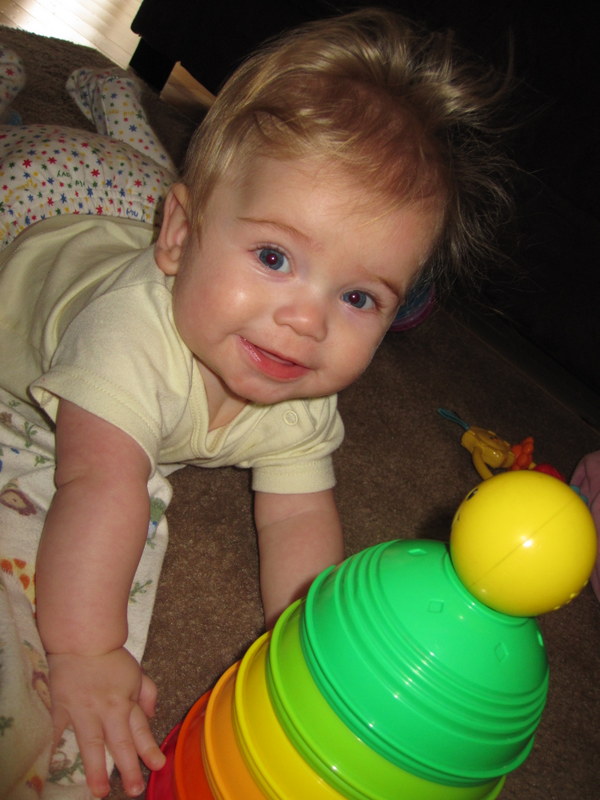 It bothered me though! So I'd keep reminding her not to kiss his face or his hands, not to put his toys in her mouth, and (specifically) to keep her coughs to herself. 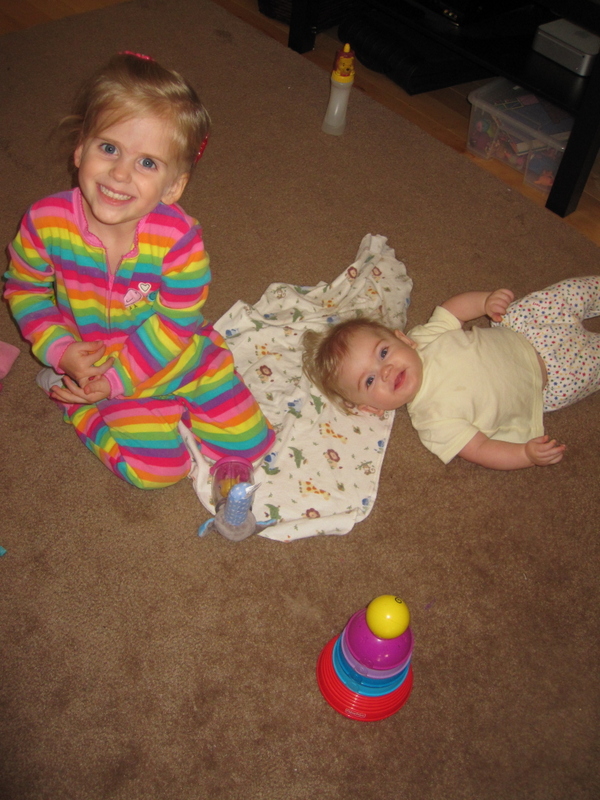 A couple of days ago when she was coughing right in his face and chastised her for it.

"Don't snack on your brother!" I told her.

I'm not sure if it was an unfortunate combination of sneeze/cough (like I was going to say sneeze but then decided halfway through to say cough) or if my mind was just on other things (like answering the ever-present dilemma of what to eat for our next meal). 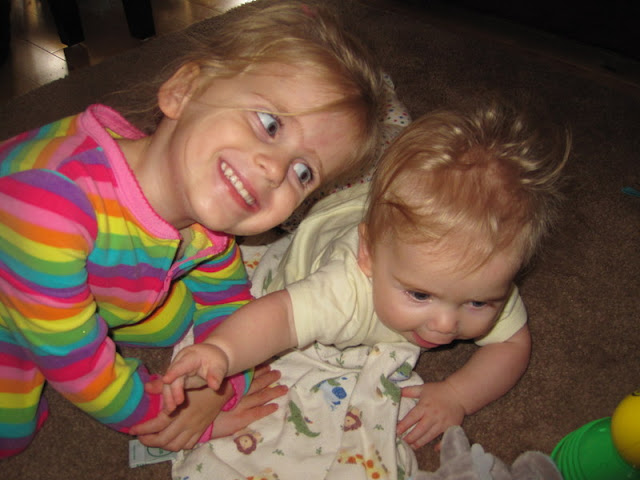 I was a nervous wreck over Miriam's fever because of how sick she got last year but now that my sweet little "preemie-born" baby is sick I'm even more nervous. I didn't think it was possible to be this nervous over sick children. I never was before. 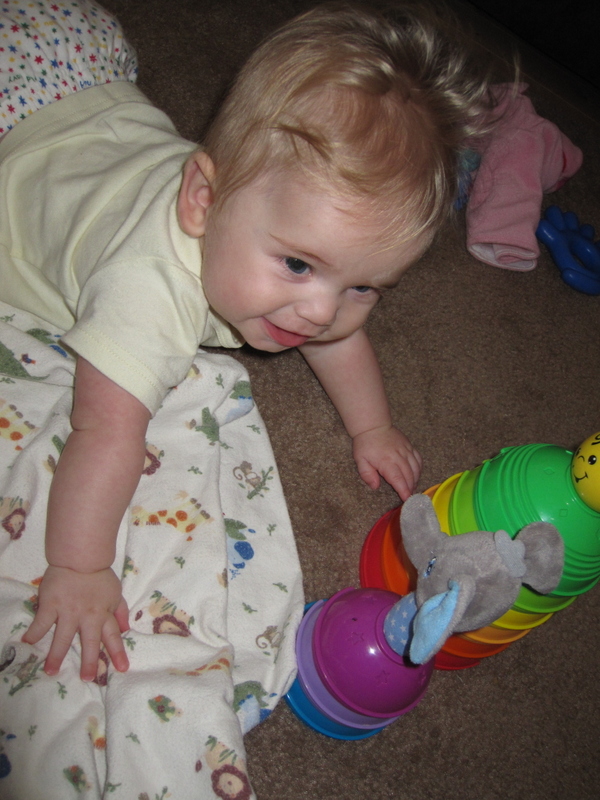 Benjamin was coughing tonight and Andrew asked me about his cough.

"Does that sound like croup to you?" he asked.

"Nope," I said. "Croupy coughs sound like barking seals. We'd recognize that." And the girls have both had croup before so I knew it wasn't croup.

"It isn't whooping cough," Andrew said. "We've all been vaccinated."

"Except for Benjamin," I said.

"What?! Benjamin's not vaccinated against pertussis?!"

The vaccination is given in a series of doses, so although Benjamin's vaccinations are current he's not yet "immune" to pertussis. So now Andrew's just as nervous as I am about Benjamin's cough, which I'm sure it's pertussis since his fever's not too high, his cough is manageable, and he's not wheezing or anything when he's breathing.

Still—it makes me not want to leave the house for anything, ever. I want to put that boy in a bubble and never expose him to any germs or sharp things or gravity or anything. Watching him suffer is torture because I just feel like he's kind of had enough of that—I don't want anything to hurt him ever again.

But I suppose a few colds, scrapes, and bruises are good for him.

And I'm sure my desire to shield him will dwindle with time.

One afternoon when Miriam was feeling alright (and Benjamin was napping) we got out a set of paints and made some pictures together: 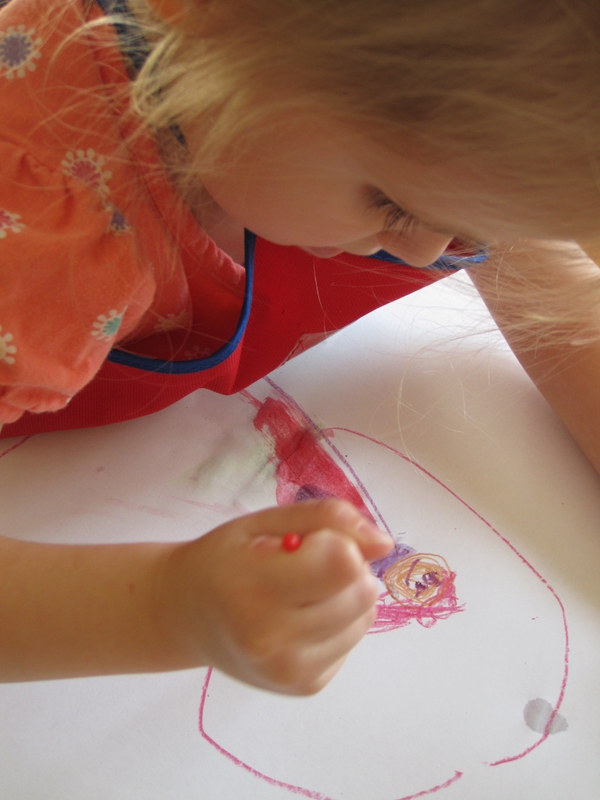 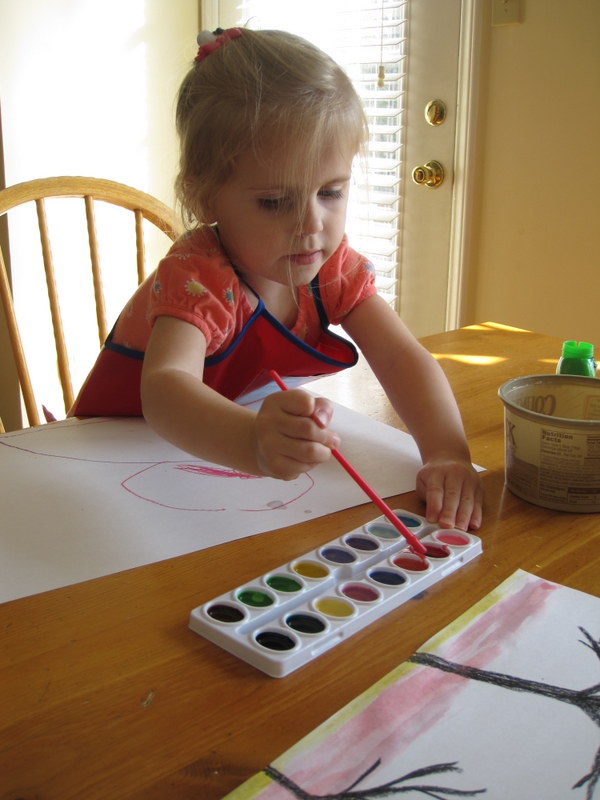 When Rachel came home from school the neighbours were playing outside. Andrew met her at the bus stop and she basically handed him her backpack and ran across the street to see what her friends were up to. It's been so lovely outside (like 75 degrees, guys—this summer is going to be sweltering if this is the winter) so Benjamin and I went outside to visit with the neighbours while the kids played.

Miriam was terribly upset when we left her inside.

It broke my heart a little but I refused her pleas and left her inside with Andrew. Rachel played outside until the sun was setting while I chatted. When we went inside we found both Miriam and Andrew in a napping heap on the couch, with Wonder Pets flickering on the TV screen.

"...We're not too big and we're not too tough but if we work together we've got the right stuff!" the TV said.

"Can I watch?" Rachel asked.

"No, it's getting late. We've got to get dinner going," I told her, turning off the show. "Can you help clear the table?"

She walked into the dining room and her jaw dropped to the floor.

"Yes, Rachel. We painted without you. But it's going to be fine. You were at school doing other fun things that Miriam wasn't doing and when you were my three-year-old at home we used to paint together so it's perfectly fair that Miriam got to paint today."

"Not now. We have to get supper going. I said that."

"You said I couldn't watch TV because we had to get supper going. Can I paint?"

"No. We have to get supper going."

"Rachel—you just spent nearly two hours playing with the girls across the street while Miriam was stuck inside, sick. Do you think she thought that was fair? You get to go to school everyday where you get to do fun projects at art class. Miriam doesn't get to do that. Do you think that's fair?"

"Fine. Can I paint tomorrow?"

"If you come home from school and remember that you want to paint and choose that for your after school activity then, yes, you may. But right now I really need you to help clear off the table."

Rachel is getting to be such a capable helper. She holds her brother, she cleans the bathroom (fairly well), she can make dinner on her own (if it's, like, sandwiches), she can clean her room, sort the laundry, and buckle Miriam into her carseat. But, by golly, sometimes it takes so much energy to convince her to help out! 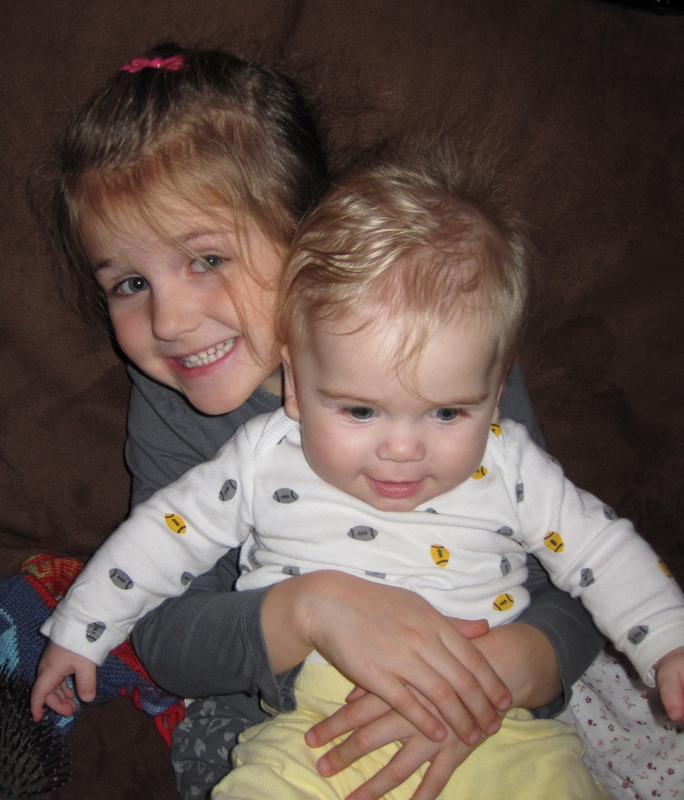 So, that was our past couple of weeks. We had so many exciting things happen that I should be able to write a few dedicated posts about (Miriam started Sunbeams, the girls started ballet, Andrew started a new semester, I got a new calling, and so on) but I've just been slacking. I'm just about caught up with life though...

Here's to staying caught up!

(Or at least not getting too far behind)
Posted by Nancy at 12:25 AM