Last night the National Weather Service issued both a "tornado watch" and a "wind warning." Though I understand that both statements were warranted, I couldn't help but feel it was a little redundant. In fact, it made me snicker.

While watching for tornadoes, I usually expect things to be a bit windy—but thanks for the warning!

It was rather windy last night. The rain was coming at us in horizontal sheets. It was noisy and the trees were blowing like crazy.

When we woke up this morning I peeked out the window and saw a foreign object resting on the fence.

"Looks like a branch blew down," I said to Andrew.

I hadn't yet put my glasses on so he clarified the situation for me. "A whole tree fell over, not just a branch," he told me.

Yes, I see that now: 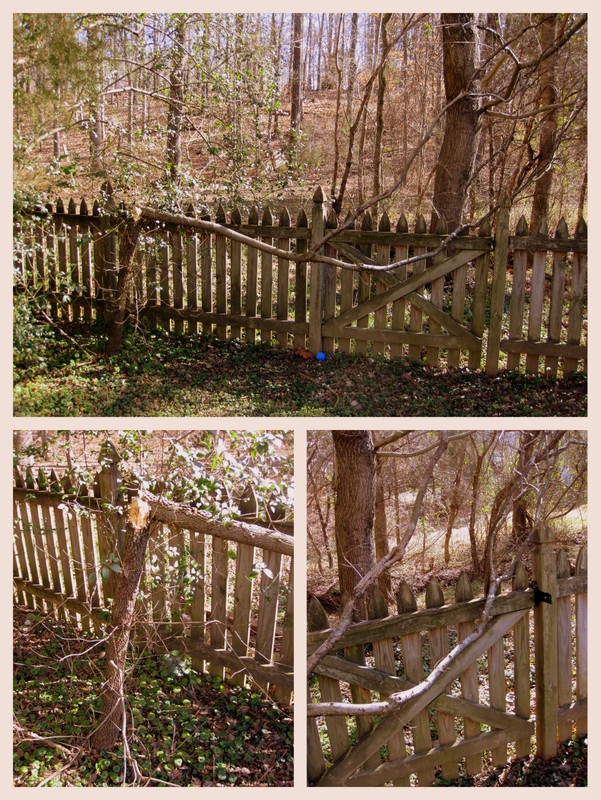 I thought it was a tree out in the woods but I can also see now that the tree is clearly within our fence so it's something we'll have to take care of sooner rather than later.

I'm just glad it was that little itty bitty tree that fell and not one of the surrounding mature trees—those big ones could do some real damage, I'm sure.

Of last night Miriam said, "I think we had a hurricane! It broke our tree!"

And Rachel, who is studying meteorology in school right now, kept remarking about how "cold fronts come in super fast!" We did a bit of yard work together yesterday and every time a gust of wind hit us she'd say, "That must be the cold front coming in! The meteorologist said a cold front was coming!"

She's right, though. Andrew and I looked at a graph of temperatures on one of his weather apps last night and you could see almost the exact moment when the cold front hit us—it went from the high seventies down to the high forties—and we're in for cold weather for a while yet. Friday's supposed to be the coldest day this week and I wouldn't be surprised if we have another half day of school (yesterday the forecast said snow, today it doesn't...we'll see).
Posted by Nancy at 2:32 PM