This morning after the girls found out ballet was cancelled they had a "home lesson," led by Rachel, since they were already in their ballet clothes. They went over some of their positions and then remembered...snow! So they quickly got dressed and then bundled up to go outside, where the ice/snow we'd gotten was rapidly melting away. 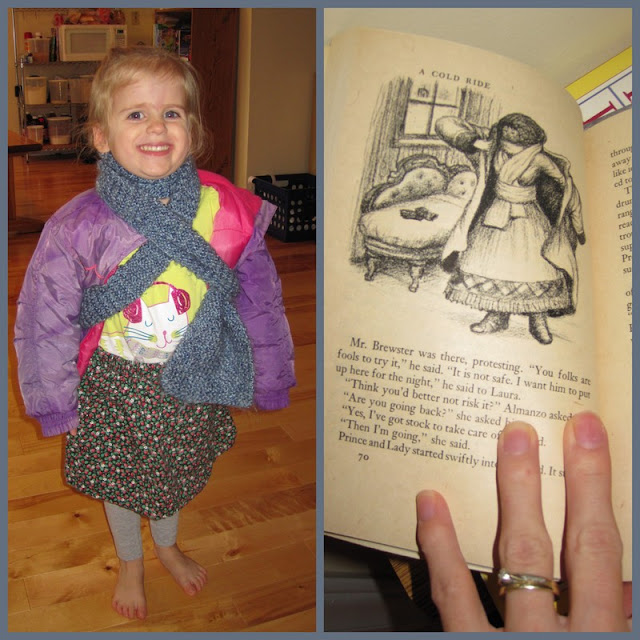 Clearly The Little House on the Prairie has been influencing the girls a whole lot. We're now on These Happy Golden Years, and I must say that the books mature with Laura quite a bit. Rachel blushes with every mention of romance—beau was a new word for her—and some of the situations Laura faces are more dire (and explained with more clarity) than the situations she encountered when she was four.

At lunch we had to discuss Mrs. Brewster who *spoiler alert* pulled a butcher knife on her husband in the middle of the night, demanding that he take her home because if he won't take her home (away from the claim and back to where they came from) she'd take herself home (by taking her own life). Pretty graphic stuff—and people say Harry Potter got "dark" at the end...sheesh. I think any time a book "grows up" with a character the themes get "darker" because as much as we'd like life to be all maple-syrup-on-snow and wild-flower-pickings (or, in the case of Harry Potter, walking-through-walls and riding-magic-trains) it's not.

Life has dark themes; our task is, I suppose, to seek out the light.

"Mrs. Brewster's not horrible," I explained. "She just has a lot going on. She just had a baby, first of all, and that does weird things to women—it can make them kind of crazy. Then you have to remember that she's living in a dingy, cold shanty and has been shut inside all winter long. And she's so far away from her family—and although she has her husband and her baby she's probably lonely. This is a woman who is suffering from some serious post-partum depression. I don't think she's always mean or Mr. Brewster wouldn't have married her. She's just going through a hard time right now."

"Well, you just had a baby and you live far away from your family and you have been shut inside the house all winter..." She ticked off the similarities on her fingers.

"I'm probably a little bit crazy right now," I admitted. "But not like Mrs. Brewster. Our house is warm. I get to go to church and Relief Society and we have neighbours right across the street. I can write, call, and skype with my mom anytime I want to. And I have some great big helpers around to keep me sane."

That doesn't mean that I'm not crazy. It just means that I'm not Mrs. Brewster crazy. As my mom recalled after having her first baby (but third child), adding a child to the home is a difficult adjustment and isn't necessarily something you just "bounce back" from. But it gets better. I think?

Anyway, the breakfast cereal was still on the table by the time lunch rolled around so we had it again, this time in yogurt. The boxes, juxtaposed, made me laugh. One says "Good days start with good mornings!" The other says "Good mornings start with good nutrition!" But what, O Neighbourhood Grocer, does good nutrition begin with? I suppose we'll have to buy another box to find out... 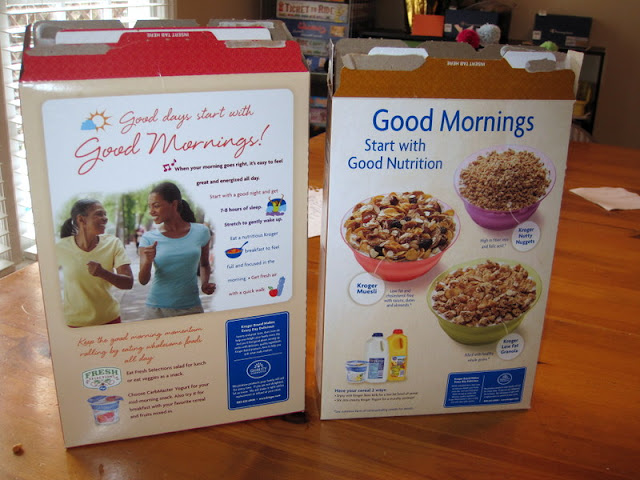 Here are the girls eating their yogurt and cereal: 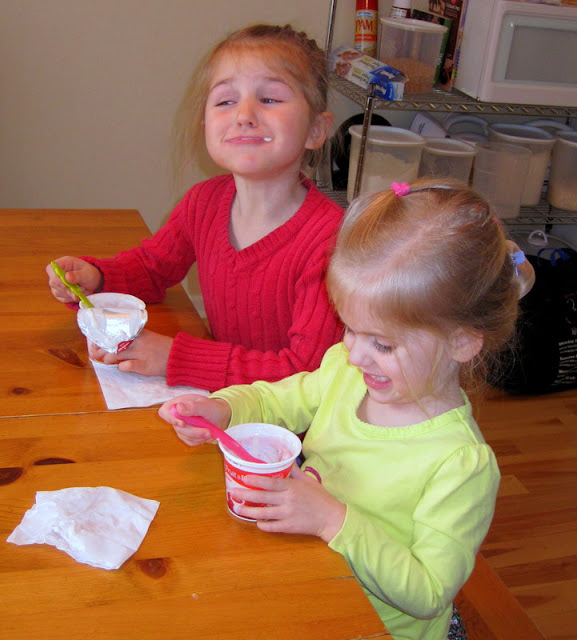 Now, neither Andrew or I can remember the context of this conversation so I suppose it just happened out of the blue. Andrew had made a peach cobbler for dessert (he actually made dinner, too, in his ongoing effort for me not to turn into Mrs. Brewster) and he was dishing it up when Rachel said, "God hates a coward, Daddy."

"Where did you learn that?" Andrew asked.