When I was in a linguistics class in college, we began to discuss that myth that "Eskimo" languages have over 100 words for snow when in reality every culture/language/people who deal with a lot of snow tend to have a lot of words for it. The professor asked if anyone knew any other terms for snow and I scored mega points with the TA for suggesting "corn."

"You snowboard?" he asked.

"How do you know corn then?"

Canadians also have over 100 words for snow. I'm pretty sure that down south they have, like, three.

Okay, so I'm not actually sure where I picked up the term, though I do believe it was in science in grade nine—that Mr. Whatwashisname did some great lectures. (And seriously...what was his name? Also, where is my brain? I used to remember everything. Now it's a good memory day if I remember to buckle all three kids' seat belts).

I've dealt with a bit of snow in my life. Too much snow, really.

Today I saw something a bit different. We had an ice storm, sure—everything was covered with a thin layer of ice (see fig. 1—Andrew's motorcycle scooter cover, which wasn't blowing in the breeze because it was encased in ice). 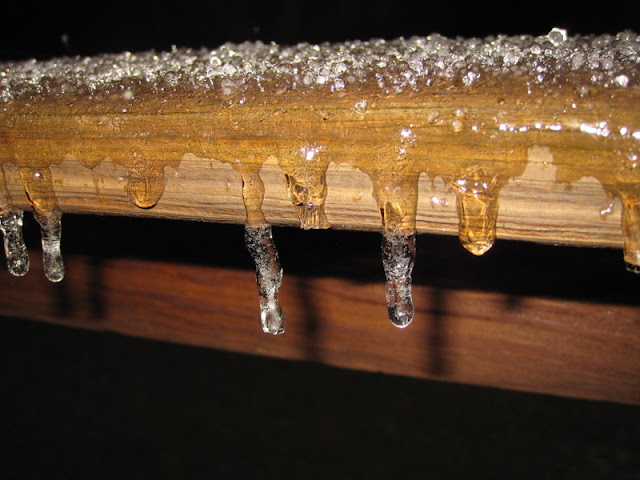 Perhaps it was more bizarre to see ice covering things here where up until last week I wasn't sure it would ever get cold enough to actually freeze anything. 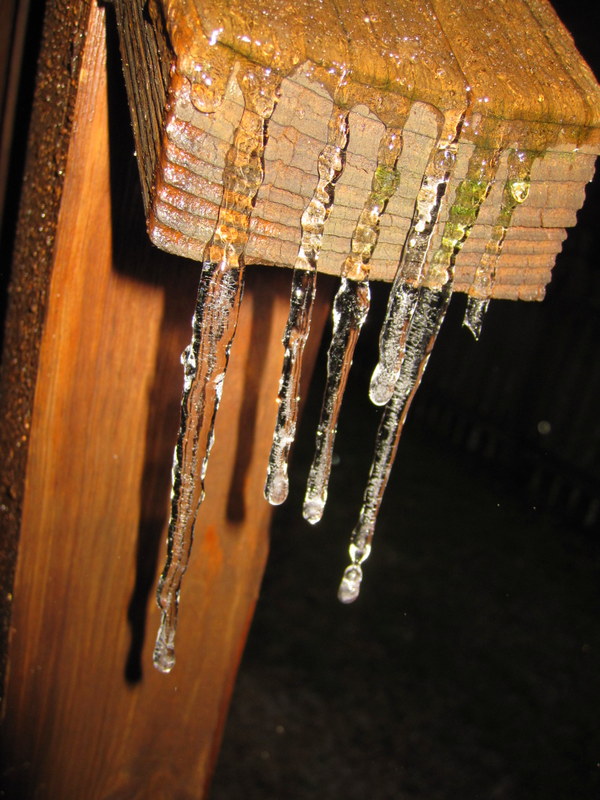 So, it got cold enough to freeze things and we had a bit of ice (not a ton), which was supercool (haha—get it?) but here's what was completely new to me: 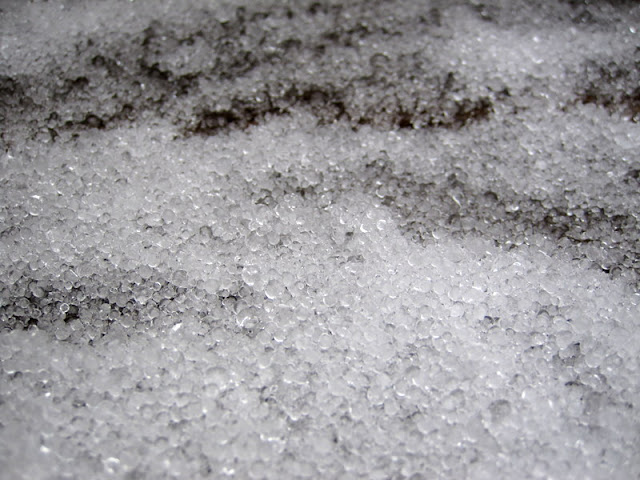 Where I come from, sleet is rare. What I grew up calling sleet must've been something different.*

Ice pellets are different. They're not hail—they're smaller than hail and are always clear (because they're only ever one layer (hail can accumulate several layers), like little frozen rain drops. This is a good thing because playing in ice pellets is a lot less painful than playing in hailstones and if you work hard enough you can do everything with ice pellets that you might do with snow. 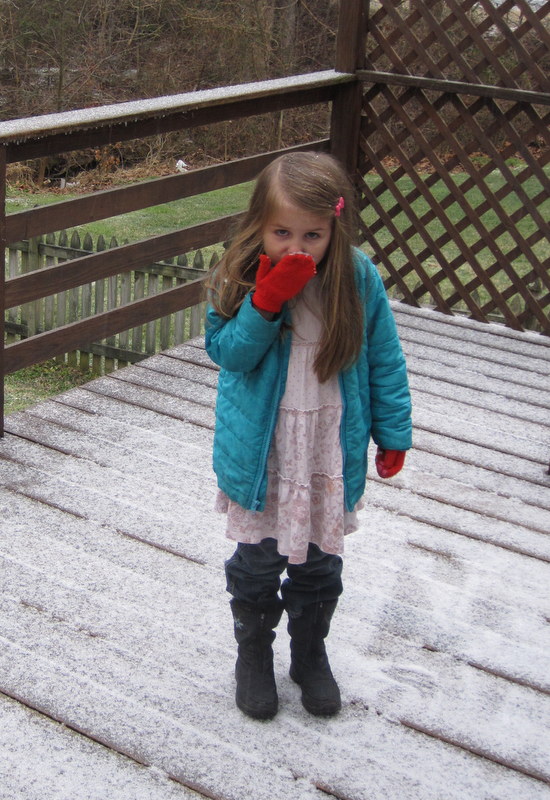 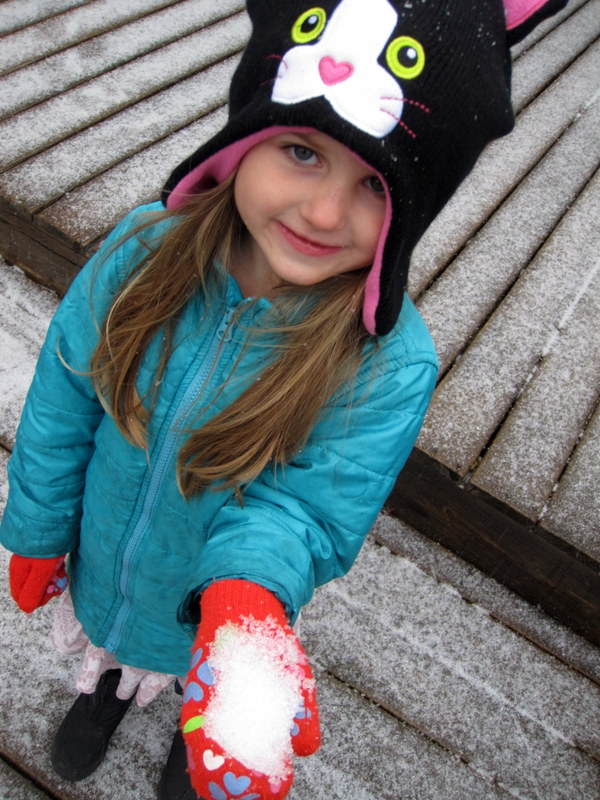 Rachel and I had a great time playing in the freshly fallen ice pellets while everyone else napped. 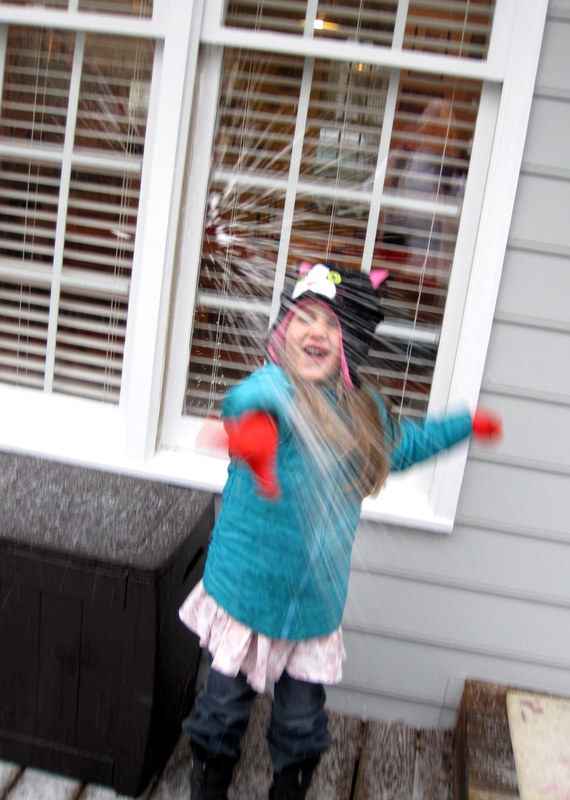 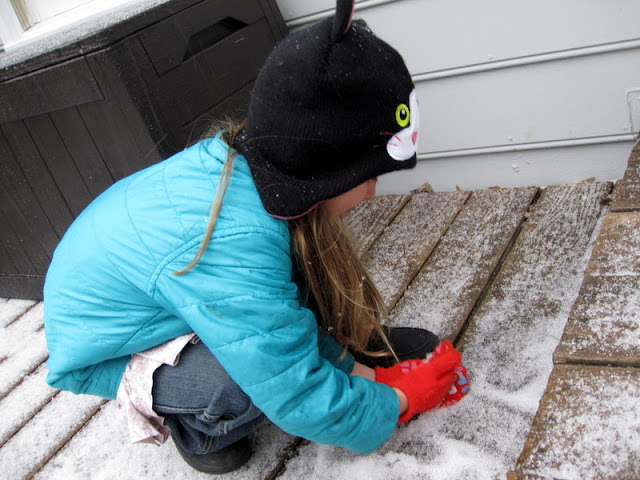 I am far less concerned about her eating snow here than in Utah—you should check out our air quality index (don't be jealous, Utah peeps). 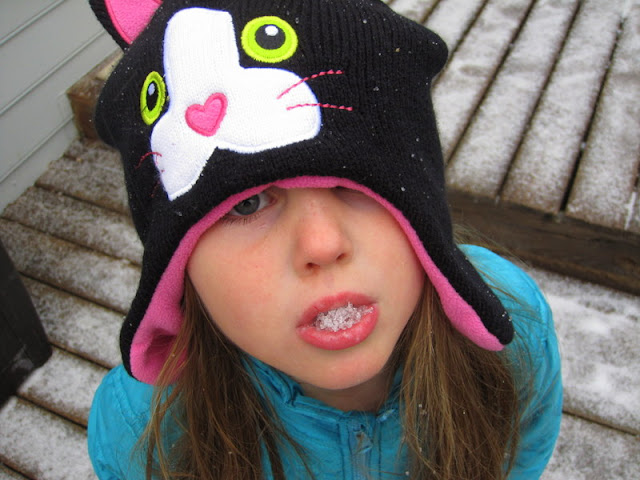 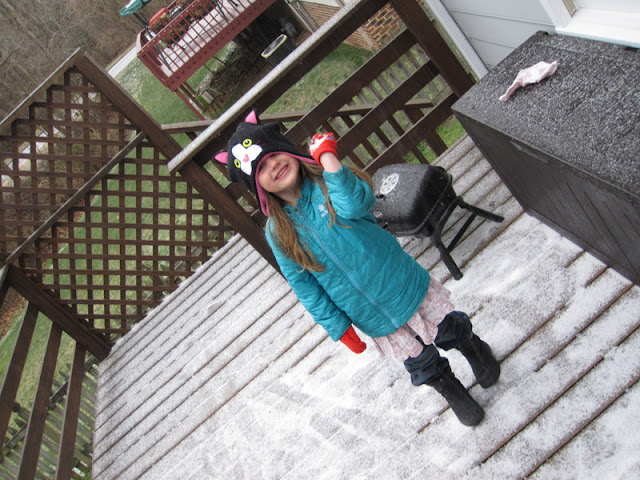 I actually went inside to wake Miriam up from her nap so that should could play in this lovely winter precipitation with us. It was a little melty so I was afraid it would all freeze over tonight (it probably will) and then melt by the time we were finished ballet (it probably will) so if she didn't wake up to play then she'd miss winter altogether! 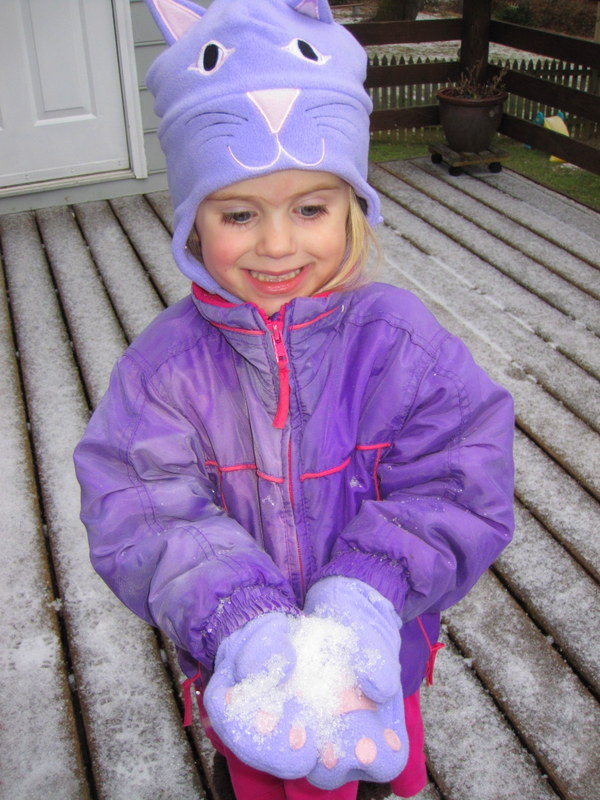 Admittedly that's not exactly a travesty in my books. Actually, hibernation was always something I could do. Sleep right through winter? Bring it on. 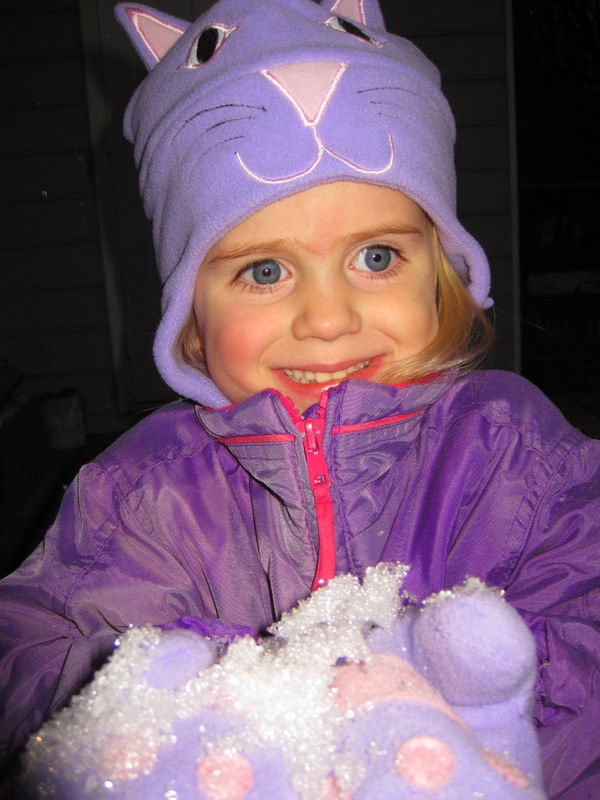 Miriam isn't terribly fond of the cold either but she had fun in the snow for a little while. 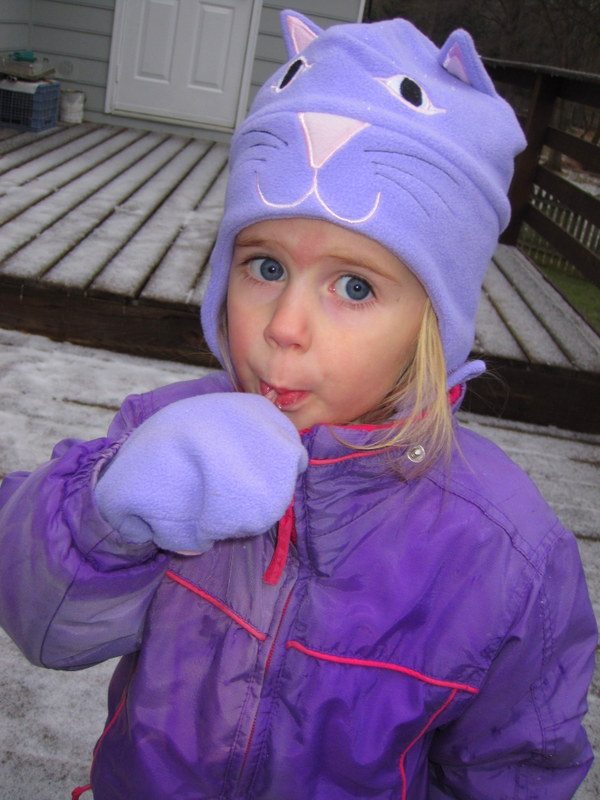 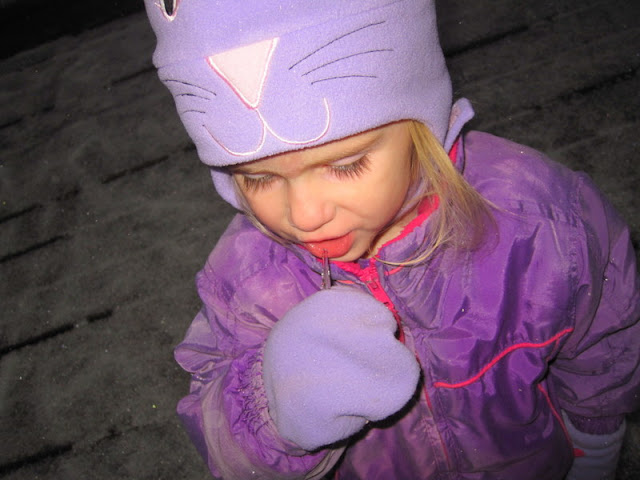 She only lasted for a few minutes before she wanted to go back inside again. Her last straw with the cold was when the girls went to ask if the neighbour girls could come outside to play and were told they couldn't because they were having dinner (but that maybe they could come outside after dinner).

Miriam was the first party pooper and because she was going inside, Rachel decided to go inside and I sure wasn't going to stay outside if there wasn't any little person to supervise.

Just as we got warm the neighbour girls came knocking on the door so we got all dressed up again and went back outside. The ice pellets were sticking to the ground deck a little more so they got out shovels and things to scrape the pellets off the wood (the ice pellets on the ground were completely unusable—they'd melt and/or freeze on the spot) so that they could have a snowball fight. 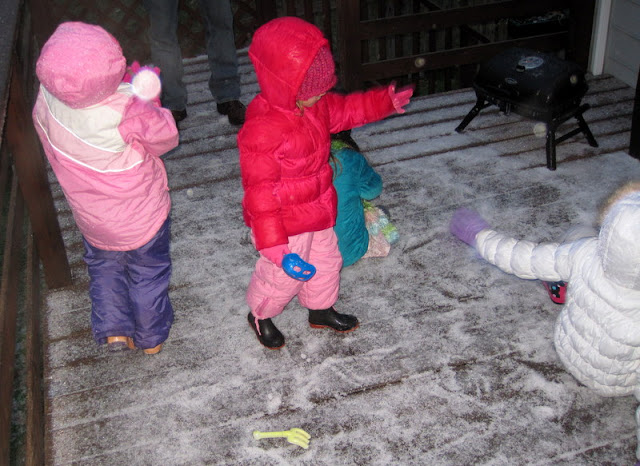 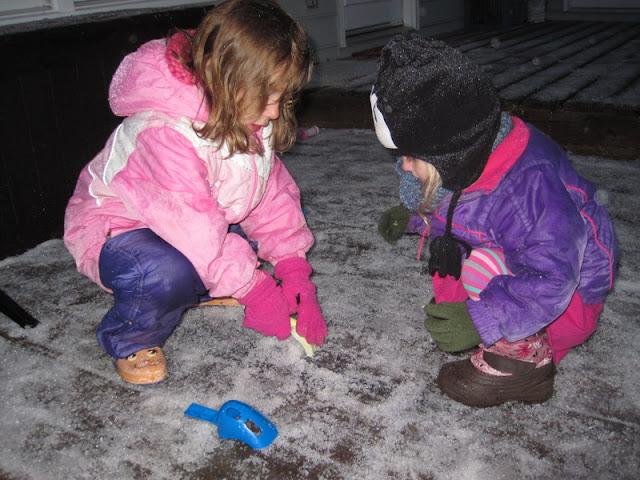 Benjamin hung out with us for a while. He wasn't entirely impressed with the cold, though the snowball fight did get a few mildly-entertained guffaws out of him. He went inside early to hang out with Daddy. 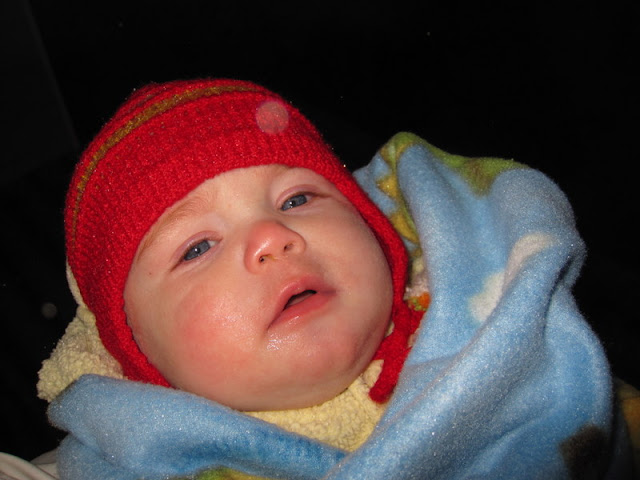 The water in all our buckets froze and the girls were able to pry some of it out. Rachel thought this one looked like a telephone of sorts: 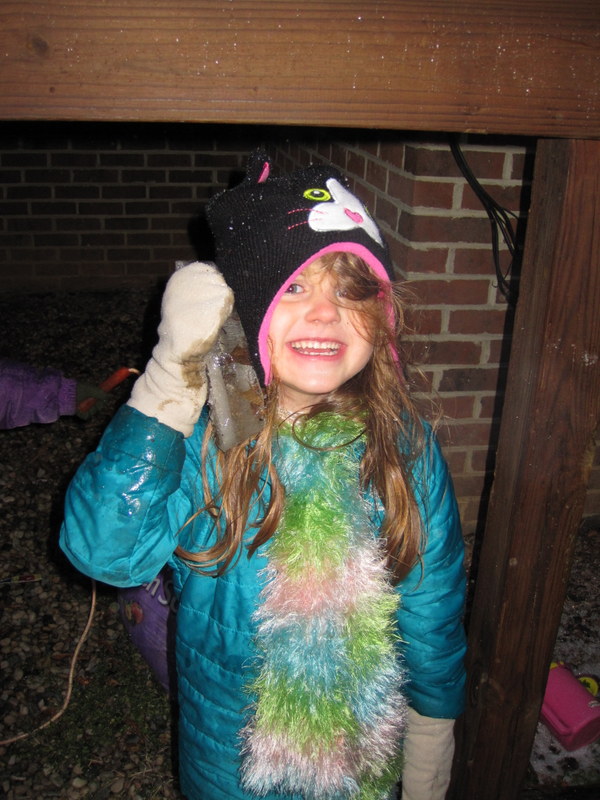 Miriam found a circle one: 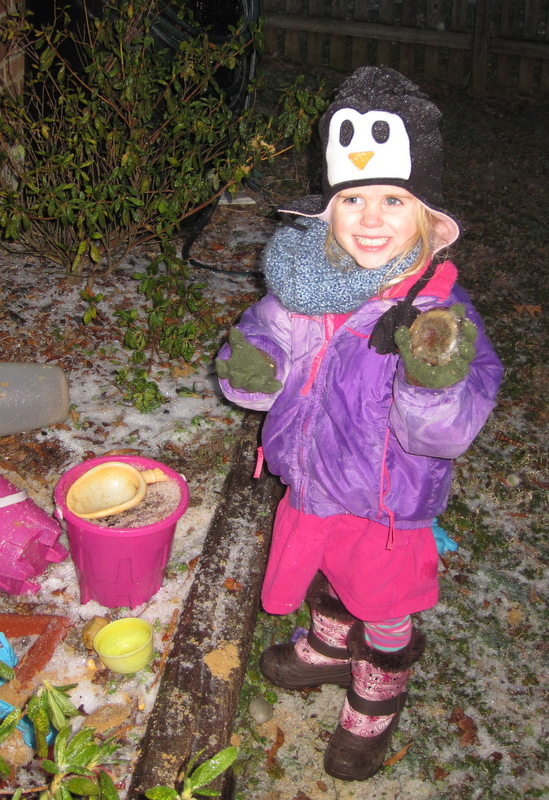 The jumprope was crusty with ice, the hoola hoop was frosty, and the balls crunched a little when you kicked them, but the girls had fun with all our outdoor equipment (not that we have much). 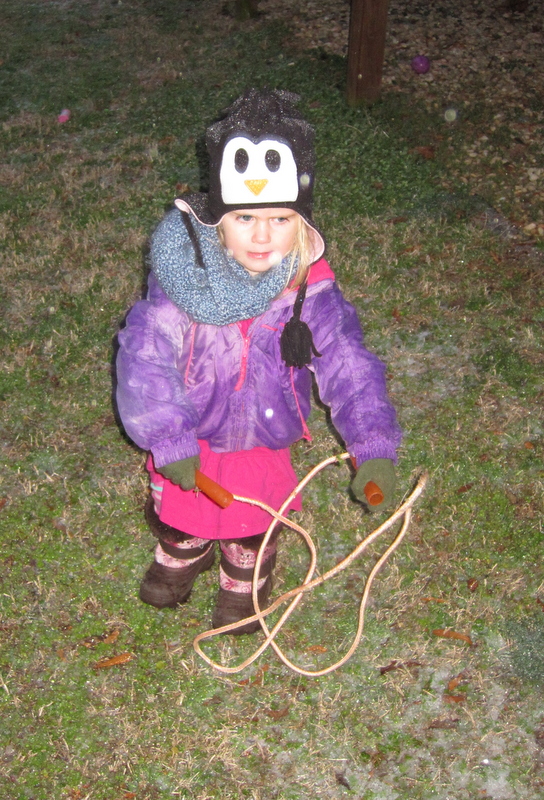 This storm didn't seem too bad to me. The ice pellets were a nice touch—they added a little more traction to things than plain ice would have offered (the girls tried to go skating in their boots but either we didn't have enough accumulation or it wasn't slippery enough or their boots have awesome traction...whatever the reason boot-skating was minimal). 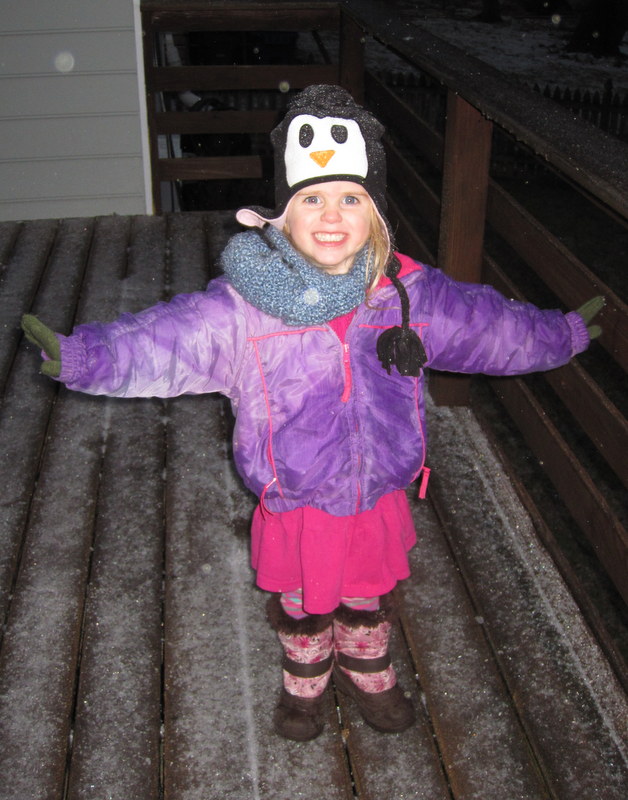 It was a fun day, though I do feel as though the south is crying wolf with these storms. I keep hearing such awful stories, though most of the ones I heard from locals were prefaced with "This one time in 2002..." That was a decade ago, folks.

But as a friend—and a local—pointed out, they aren't as bad here as they are in Florida, where the anniversary of a snowfall 36 years ago was newsworthy. I'm sure that will be like the hail storm we experienced in Egypt a few years back—no one was quite sure what to make of that (it felled trees, stopped the metro, halted traffic all over the city—there's no drainage system in the streets so the roads were rivers—it was a mess)!

I'm curious to know whether devastating storms are the norm here or if they're just a little more nervous about things like snow here. On the scale of mild-normal-crazy, how would a Carolinian (?) rate this storm?

I sent Andrew to the store for batteries because we have AA batteries up the wazoo but one of our big flashlights takes DD batteries and I wanted to be sure that we had enough DD batteries to last for a while—just in case. He wandered down the bread and milk aisles, just for a shufti because we'd heard about the milk/eggs/bread phenomenon down here (which is that whenever "there's a storm coming" the milk/eggs/bread disappear from the shelves). Apparently that's true:

Our neighbour (the one at the bus stop with us) asked if we were good on bread and milk and eggs.

"We should be," I said. "We just went grocery shopping."

"Well, good," he said. "I don't know what it is about a storm but if you go shopping before a storm you can't find bread or milk or eggs. It's like storms make us crave French toast or something!"

It's an interesting phenomenon, but I wonder if it isn't self-perpetuating. Everyone keeps talking about the importance milk and eggs and bread in the anticipatory stage of the storm which probably causes people to go out and buy more milk and eggs and bread. Not that those things aren't important; just that there are other things that are equally important and/or useful in an emergency situation.

This one time, a tornado ripped through my hometown (one of my hometowns, anyway), destroying some grain elevators and flipping a semi-truck but even though they still get tornado warnings (and treat them seriously) they don't bunker down every time it gets windy.


I'm not sure what I'm trying to say or how I will ever manage to say it without offending someone, but I think this probably sums it up nicely:

And, in case you're wondering, there are so many words for snow.

*And, yes! Sleet in Canada means 'rain mixed with snow' which is certainly different from ice pellets but still allowed to be called sleet.
Posted by Nancy at 12:46 AM