By mid-afternoon yesterday it was still in the balmy 50s and we got a phone message from the school superintendent calling for a snow day. It did get a little chillier by the time the sun went down and by the time we had dinner it was raining. We put the kids to bed, looked out the window, and got them back out of bed. It had started snowing...ish.

We knew we couldn't postpone an opportunity to prance around in the snow this far south, so decked out in pyjamas and boots the girls pranced around the porch.

Rachel kept yelling, "Snowball fight!" and flinging handfuls of slush at no one in particular. 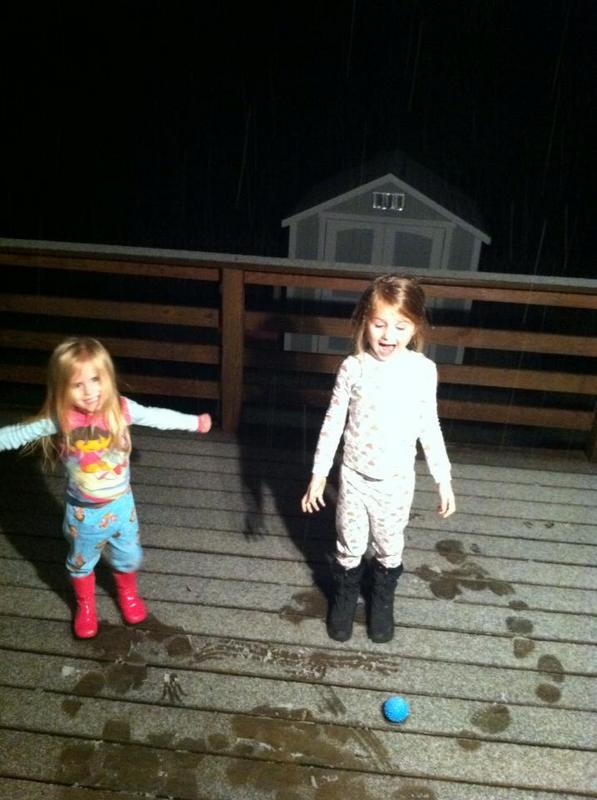 The temperature was 34 degrees (which, for those of you who keep track of Celsius is above freezing). 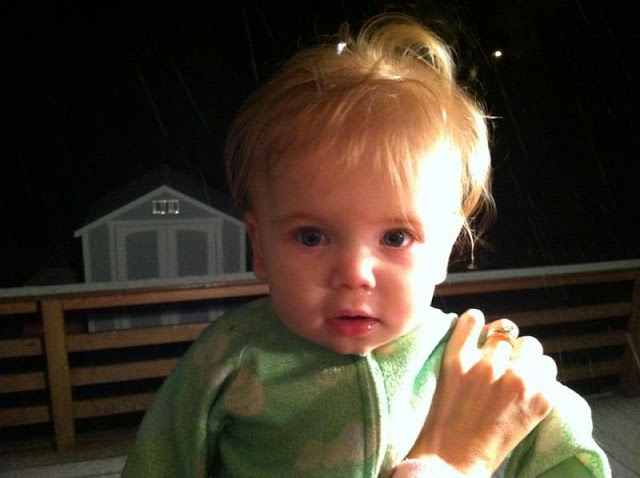 We made fun of the snow somewhat ruthlessly on facebook. We were assured there were reasons—one of the most common being that they aren't equipped with snowplows.

One of our friends, who is also a transplant here, said, "There is something falling from the sky that is NOT sunshine. I repeat, this stuff is NOT sunshine. Cancel all public schools and run for your lives!"

That pretty much sums up what happened. I mean, I know more northerny places have snowplows and such but I'm also pretty sure they wouldn't break them out for this: 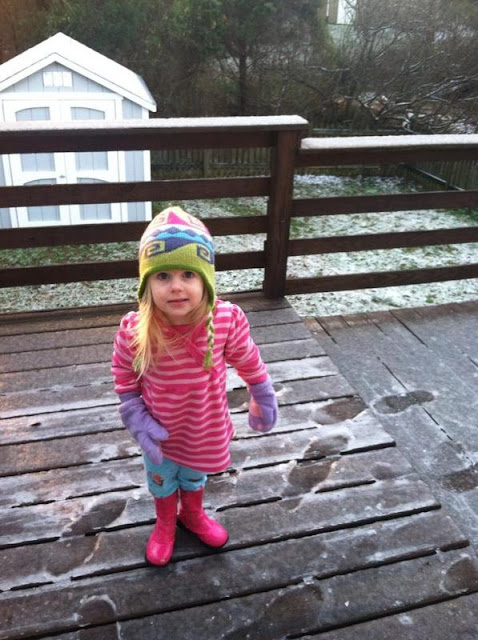 Yes, after staying up late to play in the snow the girls woke up early to see if there was any snow left, and there was...kind of. It dropped below freezing last night and so managed to preserve a bit of frozen slush for the girls to enjoy this morning. They were hoping to build a snowman but resigned themselves with "ice skating" on the back deck while it lasted. The morning sunshine was quickly melting away their "rink." 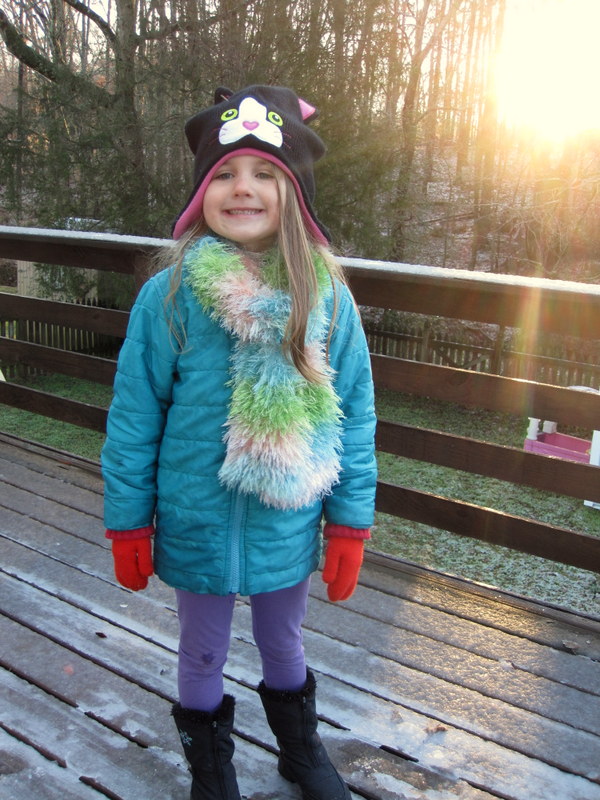 Miriam tired of the cold long before Rachel did. 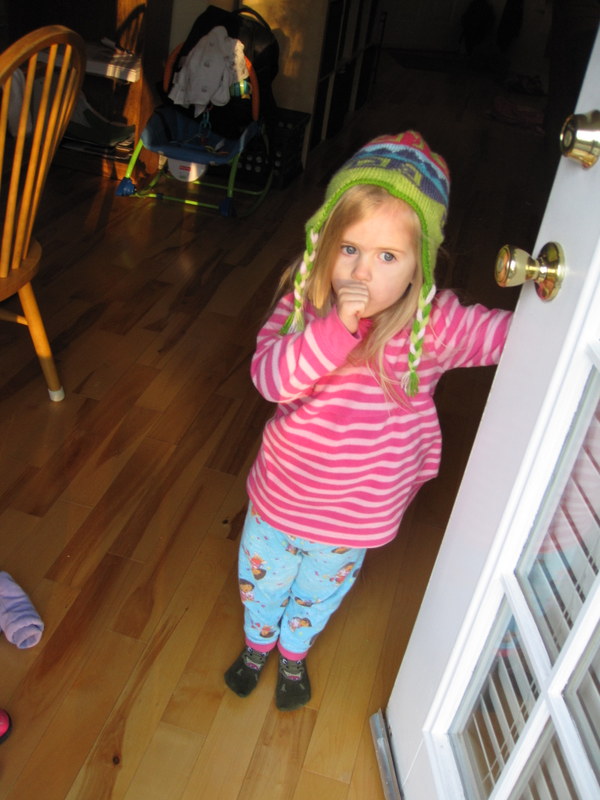 She came inside with me to help make breakfast. We made oatmeal—in a pot. My girls were shocked.

"Wow! Whose birthday is it?" Rachel asked.

"And it's not my birthday, either. Mine is in the summer. So is Mom's. We have that same thing—you know, like those animals in the sky—we're Cancer," Rachel said. "So it's not Mom's birthday."

Can't a girl make oatmeal for breakfast without everyone wondering if the sky is falling down?

I suppose I don't fix breakfast very often (up until today that probably could've read "ever" instead of "very often"). I just don't like breakfast. Allow me to clarify: As a meal, I have no problem with breakfast; it's the food I have issues with. You're more likely to catch me with a burrito slathered in salsa first thing in the morning than you are to catch me with a spoonful of Cheerios heading toward my mouth. The kids are happy with cold cereal though and I'm not one to fight against what's easy.

Besides, it was a special day. It snowed. It was a snow day—my very first one since that one St. Patrick's Day in High River when it snowed like 4 feet by 7 AM and just kept coming down, thick. Of course, I was homeschooled so a fat lot of good it did to have the town call a snow day. We actually lucked out with this snow day because we're on the "traditional" calendar and had the day off, anyway, so it's not technically a snow day for us (but it was for the year round schools). I was quite happy not to have to waste a snow day on the pithy amount of snow we got (which melted, of course, before noon).

Anyway, everyone loved the oatmeal—it was apple-cinnamon oatmeal so it wasn't quite as uninvolved as boiling a pot of water and adding oatmeal (because I boiled a pot of water, cut up an apple, added oatmeal and cinnamon—Suzy Homemaker, right here).

"Wow, Mom," Rachel beamed to me as if I'd just majorly outdone myself. "This is really good. I love it when you make meals from scraps!"

"Yes. When you make something with actual ingredients instead of using a mix it's called making something from scratch."

My plan is to not make oatmeal for breakfast for at least another half decade. That way when I do it again they'll be equally wowed.

After breakfast we loaded the kids up in the car and headed to the Life and Science Museum. Andrew had class and I didn't feel like spending the whole morning cooped up in the house with the kids. We've been cooped up for far too long. Benjamin hasn't had a fever for two whole days. It's the first time our house has been completely fever free in weeks. I was itching to go somewhere that wasn't church or the doctor's office or the grocery store.

We have a pass now, which means that we can go an hour before the museum opens to the general public, which worked out perfectly with Andrew's schedule. This was our first time going to the museum and taking our sweet time—we didn't make any big plans to see everything that everyone wanted to see and I didn't rush the girls through any activity because we can come back as often as we'd like!

The first thing we did was build with blocks, an activity I usually rush the girls through because we have blocks at home ("but not these blocks, Mom!"). There's a nice comfy couch in the block room and I hadn't fed Benjamin yet that morning so we were parked there for quite a while. After we'd been there for about five minutes Rachel came up to me and said dejectedly, "I'm ready to move on, Mom."

"What do you mean, sweetie? I'm still feeding your brother."

"Well, I just don't want to waste our time here. There are other things to see and besides...we've got blocks at home," she sighed as if she had the weight of the world on her shoulders.

"We can stay here as long as you'd like," I assured her. "We have a pass now and can come back whenever we want. We don't have to do everything all at once."

"Really. Besides...I'm feeding your brother so I'm going to be awhile, anyway," I reminded her.

She happily skipped off to play with blocks. They have tables set up with different patterns you can follow and challenges to do.

This was the castle that she designed: 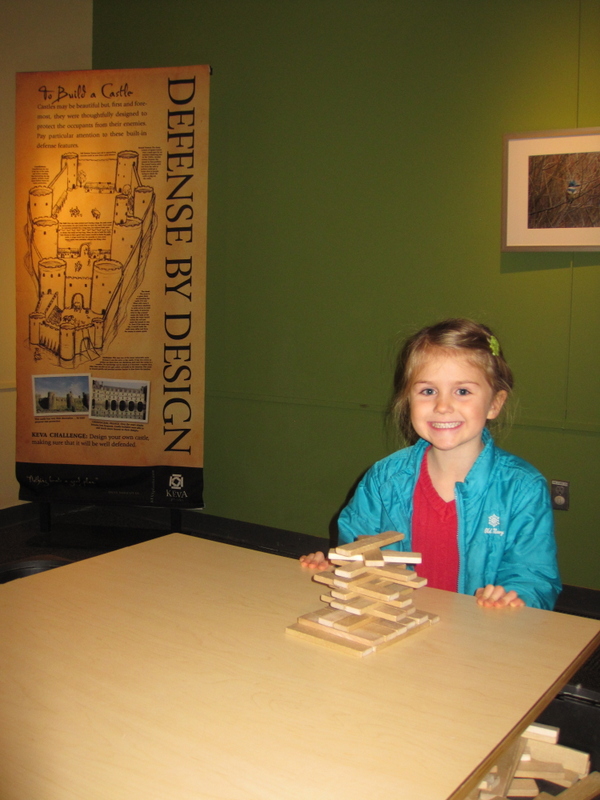 And this was Miriam's: 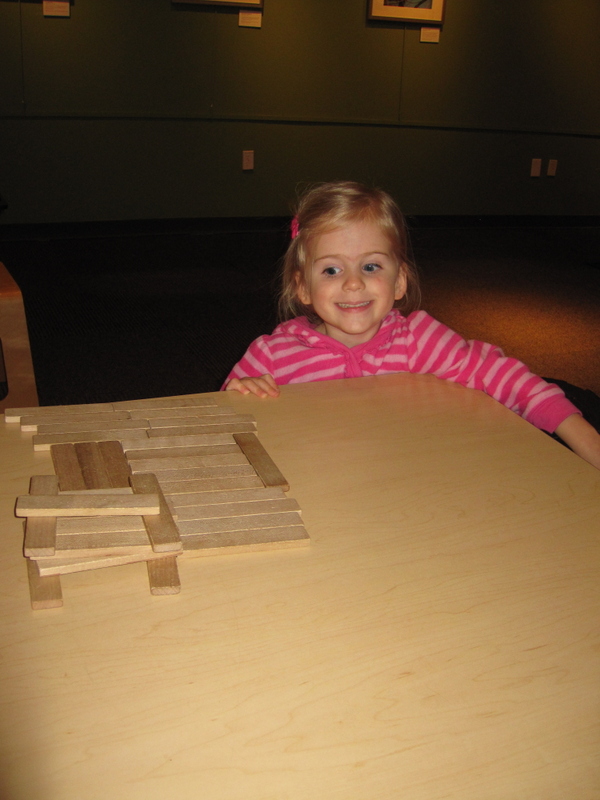 Miriam's actually ended up withstanding a good table-shaking, if you can believe it: 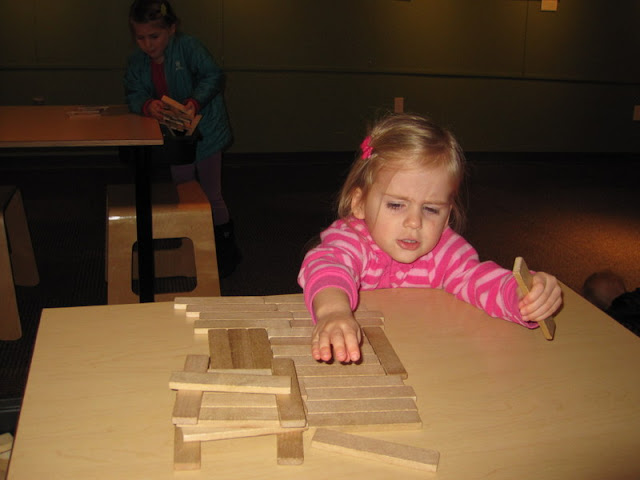 Here was our attempt at following this pattern. It was actually pretty tricky and I'm quite positive we didn't do it right because I'm pretty sure it was supposed to be an animal of some kind (so we really messed up the head): 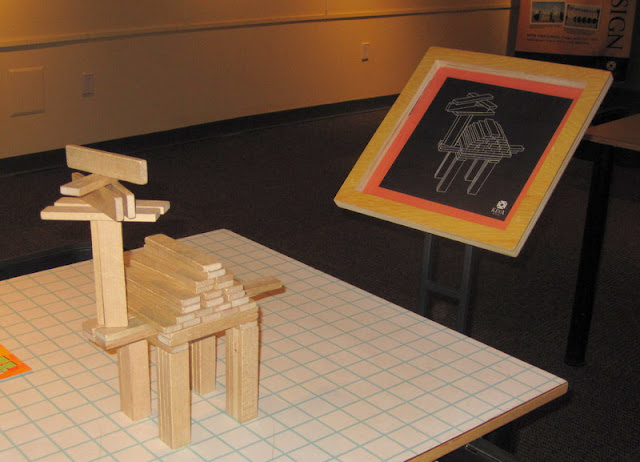 We spent awhile longer downstairs, going through the weather and space exhibits before heading upstairs where Benjamin requested Breakfast, Round II. We sat down by the dental hygiene station and I was just getting ready to nurse Benjamin when we were approached by a volunteer who asked if the girls wanted to participate in a lab they were doing on the physics of ice skating—it would be about 10 minutes, they'd watch a clip of an ice skater doing a fast spin and a slow spin; would build "fast" and "slow" skaters out of string, washers, and nails; would practice controlling spin speed on a twirly office chair, and would look at different materials under a microscope to see how they react with ice...and I could just sit on a couch and observe.

Sounded good to me.

Both the girls went into the lab and I sat down to watch them. Rachel had a blast but Miriam got a little bored and wandered over to the hand-washing station where she washed her hands over and over and over again (which is pretty much what she does at home, too).

Then she went to the sunscreen station, where you can watch yourself put on liquid shade (which is just sunscreen) before washing her hands a thousand more times. 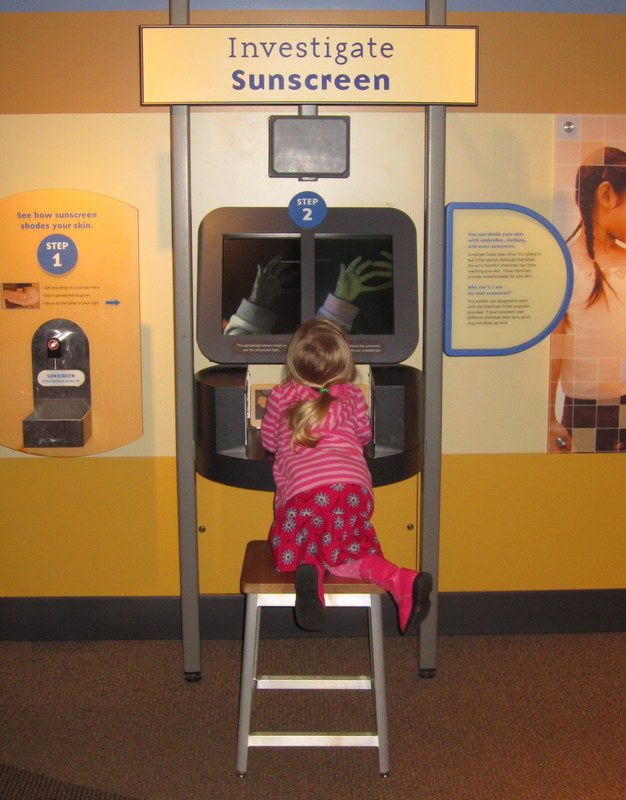 After the lab was over we went to the indoor playroom, hoping to explore. They have various stations in there: a housekeeping station with a toy kitchen and things like that, a ball course, a climbing wall, and many other fun things. Unfortunately it was swarming with children so I suggested to the girls that we go outside for a while.

"But we're Utah girls!" I objected. "It's not cold and that's hardly snow!"

So we went outside and it was just fine. We didn't run into anybody until we got to the dinosaur walk. And they were speaking Russian, so...I'm pretty sure they were thinking the same thing I was. I hate cold as much as (and probably a little more than) the next guy (whoever he is) but I'm telling you: it was not cold today. "What are they saying?" Rachel wanted to know when I told her they were speaking Russian. Unfortunately, translating parenthood is pretty boring.

Pretty boring stuff right there but very easy to translate. 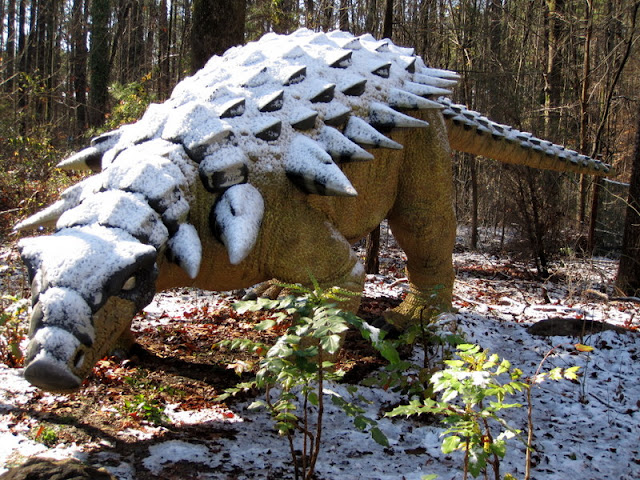 After the dinosaurs we went to the bird watching station, which Andrew always wants to skip over because bird watching is "boring" (when you get the chance, ask him how many cardinals we had in our backyard one morning last week—he stood there counting them: "Now there're five! Five...six! I can't believe it—there's another one!" See? Totally boring.).

Rachel drew a sketch of a bird. They had clipboards with pencils sitting out there and amazingly enough they weren't soaking wet. I'm really not sure how that's possible because they had obviously sat out through the whole storm. 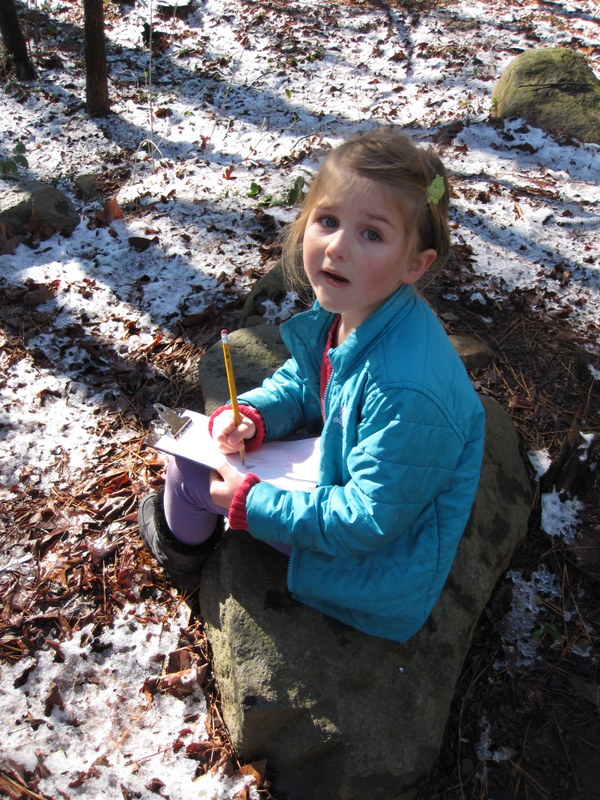 Miriam pushed the ice off the chairs. 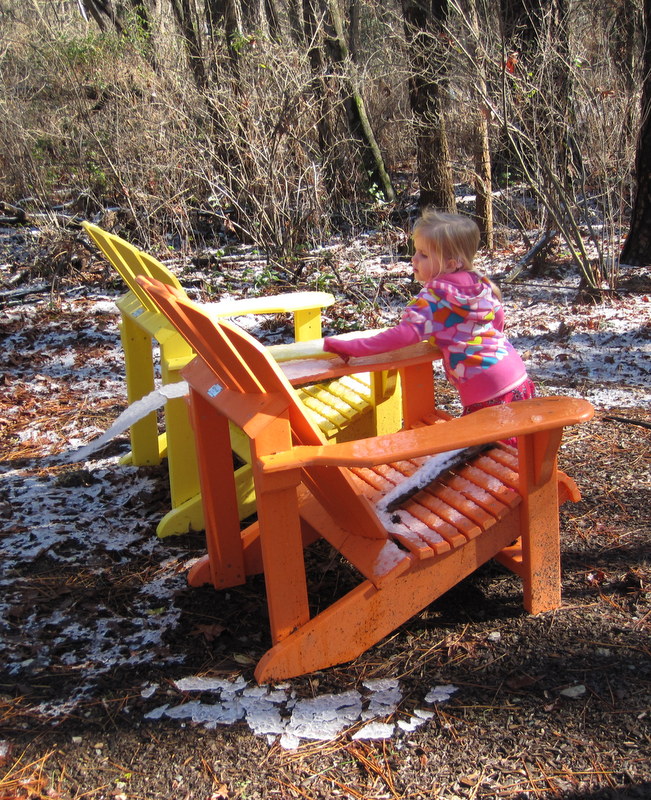 By the time Rachel had finished her drawing and Miriam had cleared the ice from the chairs we were ready to warm up a bit, so we headed to the butterfly house for a tropical vacation.

I noticed, for the first time, this very odd Jaboticaba tree. The fruit grows on the trunk of the tree...and my brain is having a really hard time wrapping its head around that idea. Apparently it's a cauliflorous trait (no relation to cauliflower, at least...I don't think). 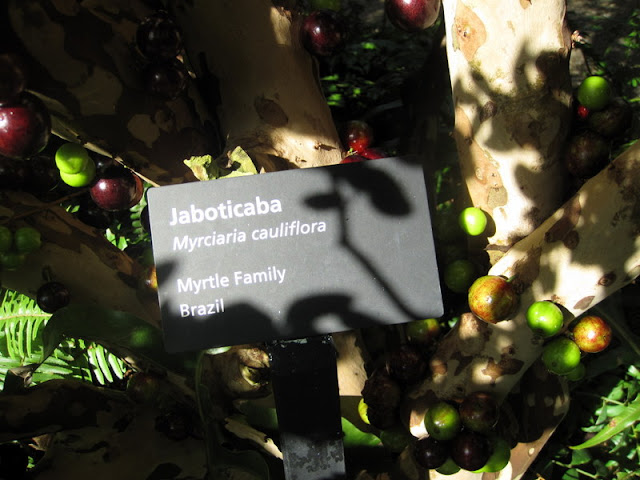 The girls were excited (and a little bit petrified) to have butterflies dancing around their heads once more... 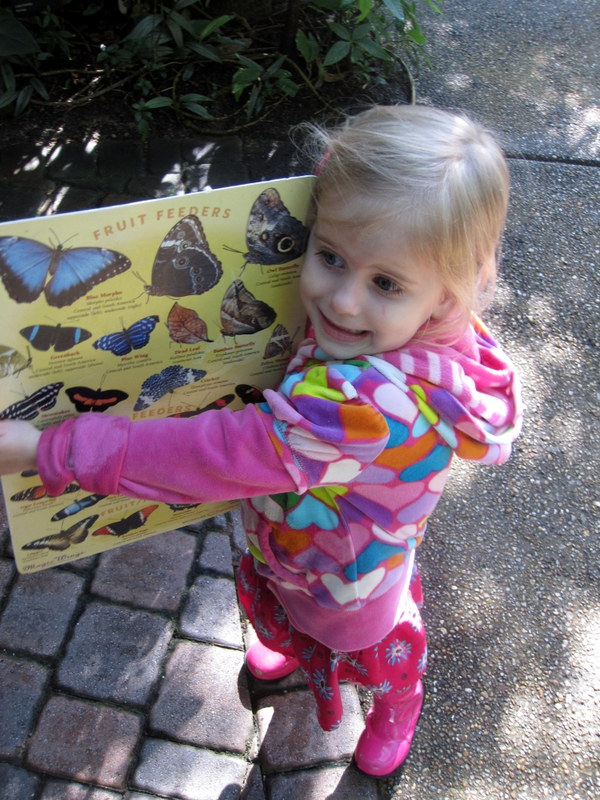 ...and we got to watch a lepidopterologist glue chrysalises to a string on a cork board while he answered questions. Apparently they hatch them behind glass for a number of reasons, not the least of which is because some kinds of wasps will kill the pupa, lay their eggs in the chrysalis and then when the chrysalis hatches instead of a butterfly emerging and angry wasp erupts (and it's easier to deal with that in a little office than it is in the big butterfly habitat). 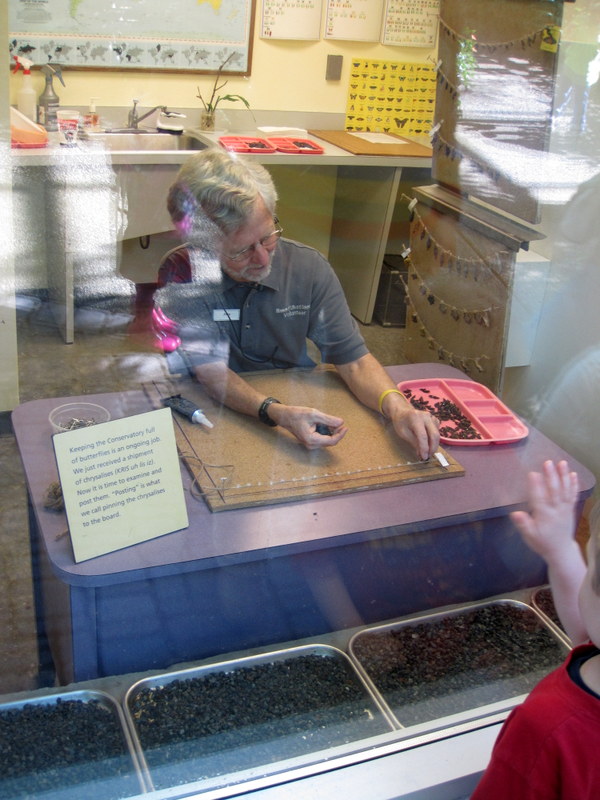 Here we are making sure we're butterfly-free: 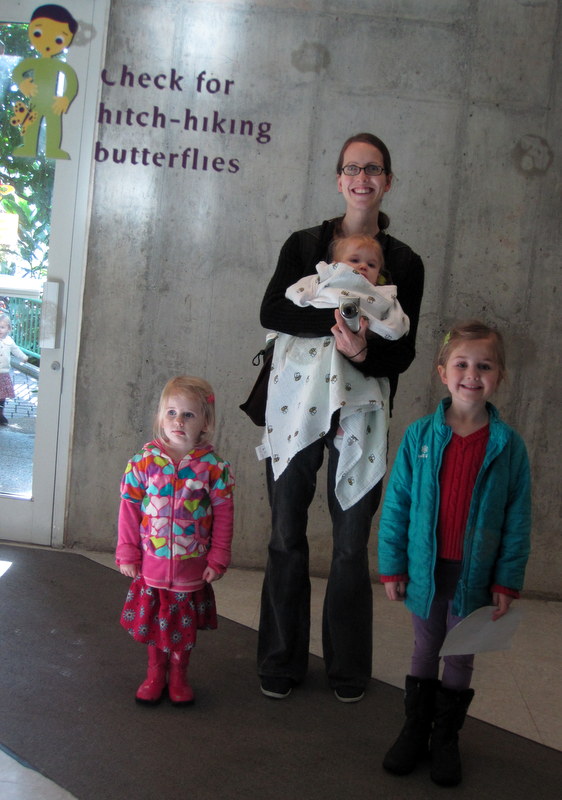 Andrew texted us to say that he was waiting for us in the lobby soon after that and the girls were ready to go home, anyway. Once home, Miriam and Benjamin went down for a nap and Rachel spent her quiet time doing origami. There's an origami station at the museum and Rachel spent quite a bit of time there this morning, too. She asked how origami is science and after a bit of thinking Andrew and I told her that origami is quite mathematical—it's geometry, isn't it? 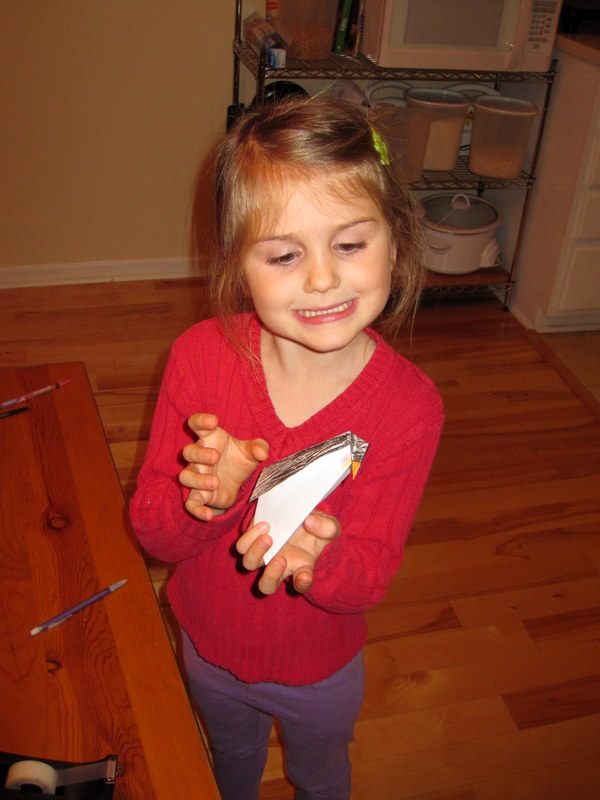 Origami continued after nap time, too: 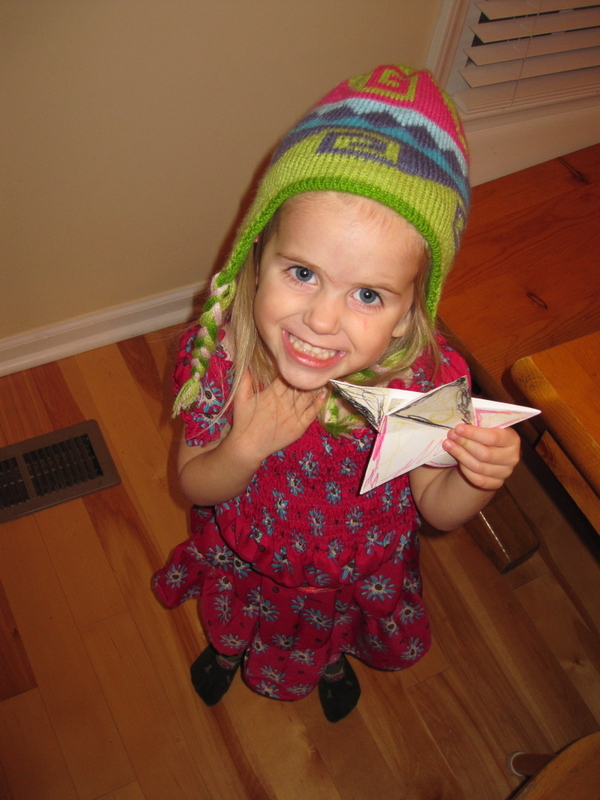 All in all it was a great day. The best part might be that tomorrow's only Saturday...and there's no school on Monday... Huzzah for a four-day weekend!
Posted by Nancy at 11:13 PM