Our entire family is exhausted. We've worked very hard the past couple of days.

Yesterday Andrew and I spent hours digging out three large holly bushes (that wanted very much to become a tree) in our front yard. It took us between three and four hours to remove one of the stumps if that gives you any idea how long we were out there. It was back-breaking labour and Andrew, the dear boy, did most of it because I was no match for that huge stump.

It took us hours of digging, sawing and...levering...to get these stumps out. 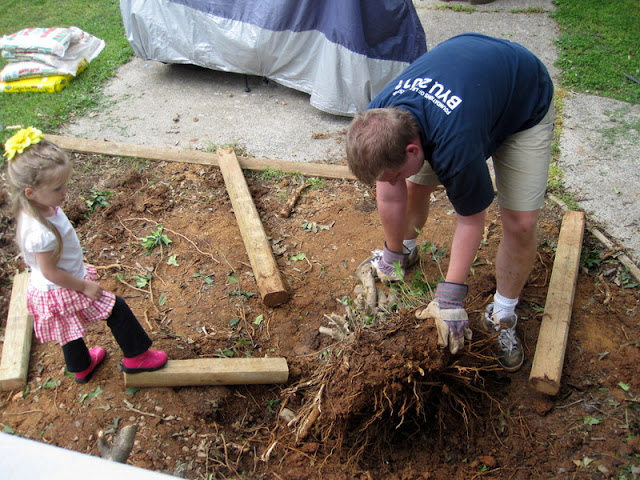 I think Miriam might now know the word "fulcrum" because Andrew kept saying that he needed "to adjust the fulcrum." I'm really not sure how many people use phrases like that while doing yard work, but Andrew does.

Miriam was careful to stay out of harm's way while she was "helping" and also helped keep Benjamin happy while he was watching us from his bouncer, which really was helpful.

We were so happy when we got that first stump out, but it was bittersweet because it meant we had two more stumps left to dig out. 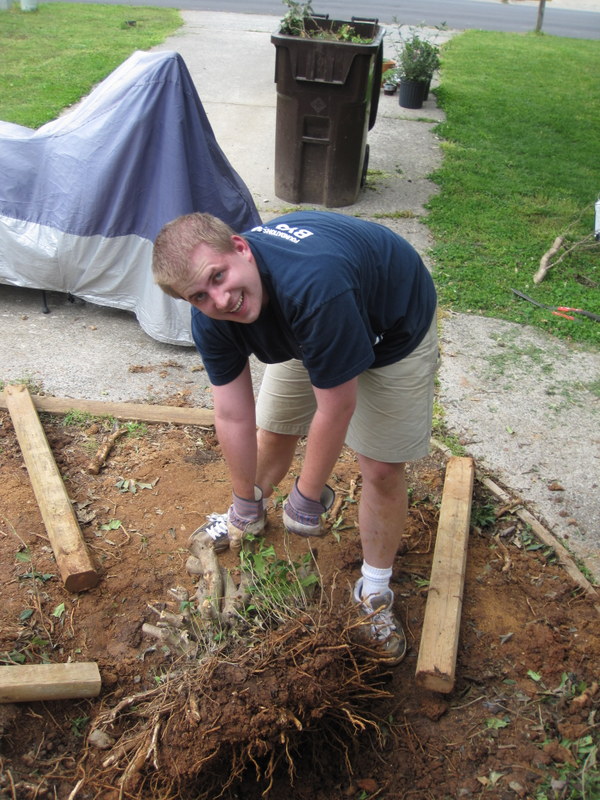 We're planning on putting some prettier shrubs in front—some azaleas and a butterfly bush—bushes that don't have secret wishes to become fully-fledged trees. It's always a good idea to check what you plant close to the house. It might be small when you pick it up at the nursery but, like puppies, those things grow.

The bushes we picked out are small now, but they say their maximum height is 4 feet tall.

The holly that we had in that spot was so big that I couldn't trim it because I couldn't reach the top. I suppose I could've just used a stool or something but, honestly, I'm glad we ripped them out because now we can look out our window.

While Andrew was hard at work (and before I started helping him with his levers) I trimmed the bushes underneath the bedroom windows. They're smaller and easier to trim and hopefully we'll be able to keep them that way!

When we finished (after Rachel was home from school) we were all very exhausted and came in to make dinner. I strapped Benjamin into his high chair for a snack while I got dinner started and he kept pushing his feet against the table to lean his chair backwards. It's a terrible habit.

The girls hate it when he does it. "No! No!" they tell him. "You're making me nervous!" Then they'll rush over to him and upright his chair. Miriam, who once pushed herself completely over in the very same chair at the very same table, decided that she'd be a helper by standing behind him to keep all four chair legs firmly on the floor.

"I'm arabesque-ing so he can't tip over, Momma!" she told me. 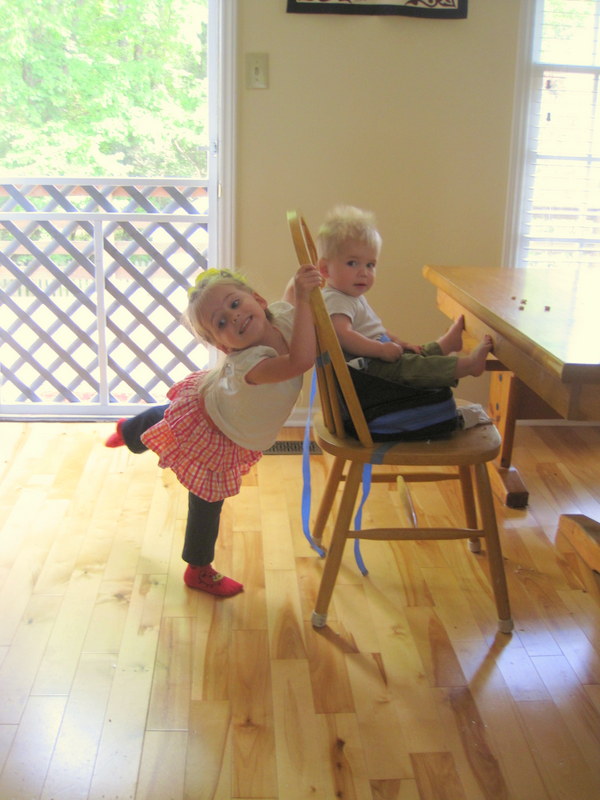 And this is what happened when I asked the kids to set the table for dinner... 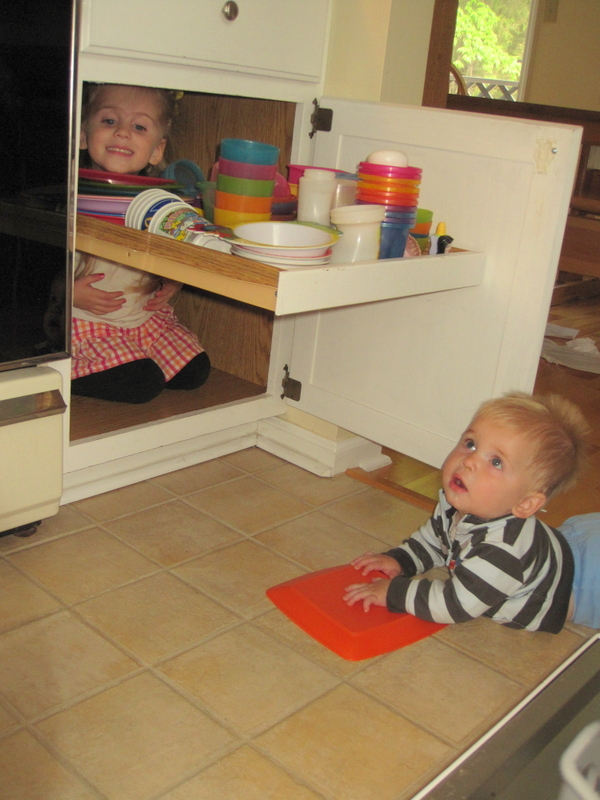 Poor Andrew is so sore from all his work yesterday. He got a big gash in his leg when he lost his balance on the lever and scratched his leg on another stump. It's pretty gross—a good six inches long. He peeled off his bandage this evening and asked me if I'd re-bandage it for him.

"Ew—it looks like there's a lot of infection draining out," he said.

I grabbed some (big ol') bandaids and the Neosporin and joined him at the dinner table where he had his old bandaid laid out in all its glory.

"I thought you said you wanted to look at it," he said.

The cut doesn't look fun but it doesn't look too deep...or even infected, though there was a lot of discharge (mostly clear, it seems) on the bandaid.

I came out of our holly battle a little sore, myself, though not nearly as sore as Andrew. My arms are aching from all of my hedge trimming. And my legs are sore from all of my shovel jumping and lever bouncing but I didn't acquire any open wounds. I did however manage to give myself a nice goose egg on my shin.

After we got up that first big stump, Andrew asked if I thought I could help him lift it into our yard waste bin. I told him I could, so we hefted it up and walked it over to the bin...but then we couldn't lift it up any higher to get it in.

We counted to three and gave it one last heave-ho and managed to get it up on the lip of the container and from there—with much maneuvering—inside it. I am so glad to see it go!

We were so very weary—and quite beaten up—by the time we went to bed last night, knowing full-well we'd have to get up for ballet in the morning. I couldn't remember what time, though, and didn't want to get out of bed to check. We had a "Fairy Walk" in the morning as well as the girls' regular lesson. Their lesson is at 10:30 but I couldn't remember what time we were supposed to be there for the "Fairy Walk."

I slogged over to the computer and pulled up the ballet calendar.

We flew around the house getting ready. I made the girls oatmeal in the microwave so they could eat it in the van. I gathered diapers to for the diaper bag. I grabbed all the hair stuff needed to put the girls' hair up for their lessons. I packed lunch just in case we weren't going to be able to come home.

Andrew packed the ballet bag. He herded the children (like cats!) and got them all into the car.

We were out the door by 9:15 and managed to make it to the studio by 9:35. Only to find out that they hadn't used the word mandatory literally. We totally could have skipped out and no one would have minded. As it was, we decided the girls didn't have time to dress as fairies to go out and deliver flyers downtown so instead we went in our street clothes. The girls were a little disappointed in that because it was supposed to be a fairy walk. But it was a little chilly this morning so they ended up being happy in their pants and sweaters while we walked to deliver flyers.

The person in charge handed us a pile and said, "Will you do scratch?"

"I'm not sure I understand," I told her, taking the flyers.

"You just hand the flyers out to people..." she said, looking at me quizzically.

"We don't know what 'scratch' is," Andrew clarified for me.

"Oh, it's a bakery downtown, kind of by the courthouse," she said.

Finding Scratch was a little tricky. They're on a road that isn't actually a road. It's like...a pedestrian walkway now, I guess. But it took us a long time to figure that out.

We handed out our flyers and then headed back to the studio to get ready for ballet. The girls danced. I worked on costumes. Benjamin scooted around on the floor finding dried globs of glue gun glue, little bits of fabric, and fun things like that. Andrew worked on his final final paper.

We rushed home for lunch, I fed Benjamin and put him down for a nap, and then I took the girls back to ballet. By myself.

I helped them into their costumes because all the parents of the baby flower fairies were under the impression that while we were doing a "full run" of the show, we were running the flower fairy scene first so that the little kids could go home. Unfortunately, that was not the case.

Instead we waited around—in costume—while they ran the whole show scene by scene. Twice.

Kids were crying about their hats, their shoes, their leotards. They weren't supposed to run around. Or make noise. They weren't allowed to eat in their costumes.

Fortunately they ran each scene twice in a row before moving onto the next scene. So, they did scene one...and then they did it again. Then they ran scene two...and then did it again. All the way until they got to our scene. I'm not even sure what scene we are, but I do know that we're the very last scene of Act I.

We were there for about three hours.

Part of me thinks Boleyn did that on purpose in order to hold the parents hostage so that we'd work on costumes while we waited. The older ballet students just get dropped off, but the parents of the little ones wait in the lobby and while we wait we're supposed to do the "work while you wait" projects.

So while our children were being wrangled by the coaches and in between taking them potty and fixing their costumes (I invented a stunning alternative method to keeping those flower hats on heads without using the chinstrap), we worked and worked and worked.

There's still a ton of work to do this week (the show is next Saturday!) so I could understand it if this really was an ulterior motive of hers. However, we'd been at the studio all day, going home only for a quick lunch break (and to drop the boys off). The girls had been dancing, more or less, from 9:30 in the morning until 5:00 that afternoon! They were exhausted.

The director wasn't happy with how the flower fairies performed their part when they were finally called back to rehearse at 4:00. It's because they were up for the "Fairy Walk," had their morning lesson, and then spent the entire afternoon in the studio. No wonder our little Flower Fairies were looking a little wilted! 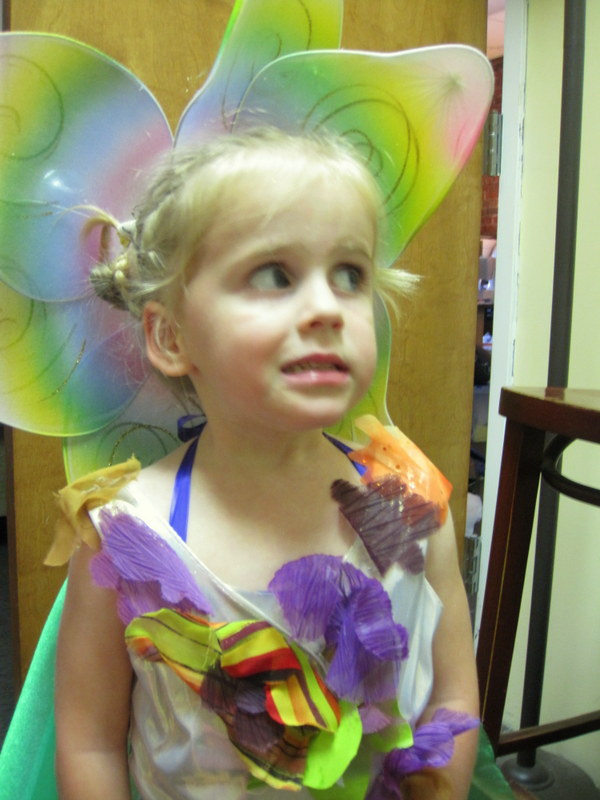 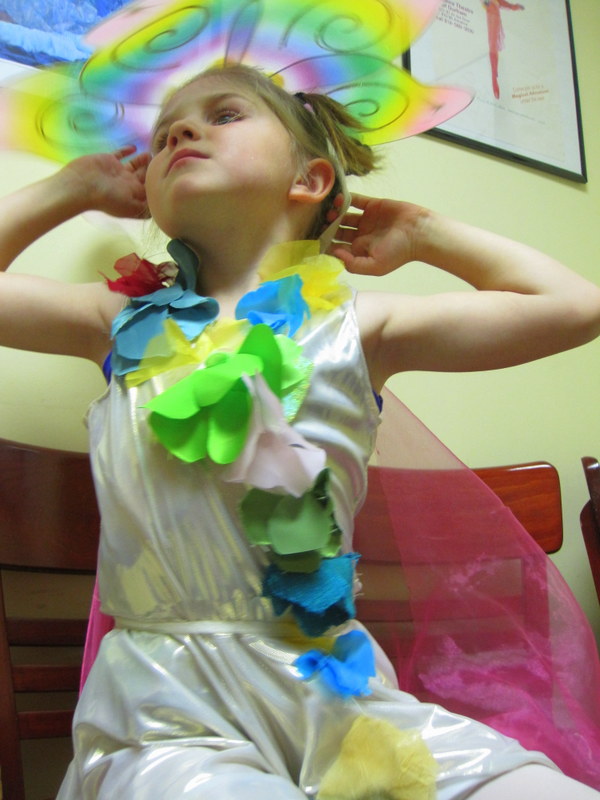 In other news, Benjamin is reaching new heights—he pulled himself up on the TV/computer stand today. He's been trying to do this for a long time (there's a keyboard up there!) but this is the first time he managed to do it. He can be a little melodramatic when he's trying something difficult. He pulled himself up on the couch at my parents' house and was grunting and making faces the whole time (probably hoping I would take mercy on him and help him up). 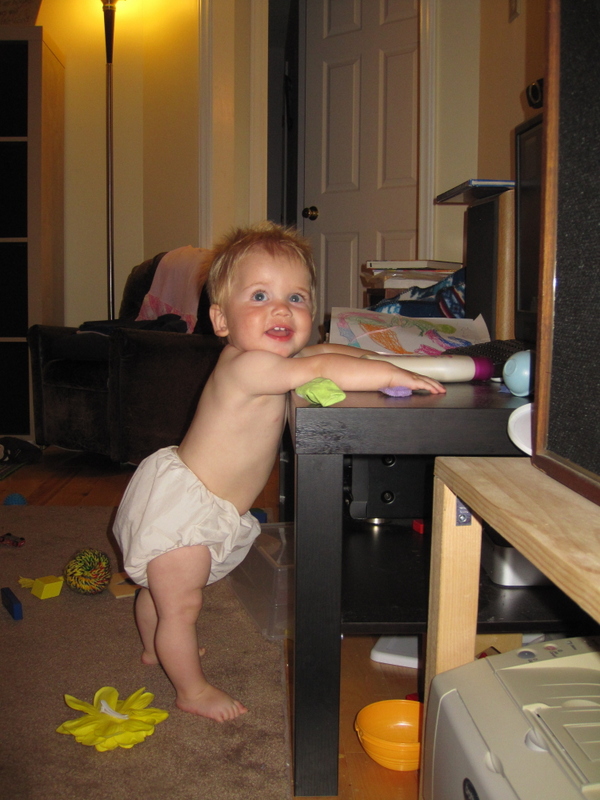 He was the only member of the family not completely wiped out from the past couple of days and took quite a bit of time to get into bed.

I'm so happy tomorrow is Sunday so we don't have to do yard work or ballet! I'm looking forward to resting up (as much as that's possible with a calling in the primary) so that I can face next week with some positive energy. We have tech rehearsals on Tuesday, Wednesday, and Thursday, dress rehearsal on Friday, and two performances on Saturday. It's going to be one busy week!
Posted by Nancy at 11:27 PM