My friend Kim is moving in just a couple of weeks. We've been borrowing her baby bouncer (for bigger babies) for several months and she's been borrowing our baby bouncer (for littler babies). We're going to have to trade back sometime next week (technically I just have to get hers to her; she's keeping mine until the day they fly out). I'm kind of sad about this because it's been so, so useful!

Today Benjamin joined me outside to do some work in the garden. He wasn't supposed to. He was supposed to be napping but he got woken up (by Miriam who decided to play drums using a metal mixing bowl and butter knives) so I hung some towels up to dry to make a little shade tent for him and he bounced in his bouncer while I worked. 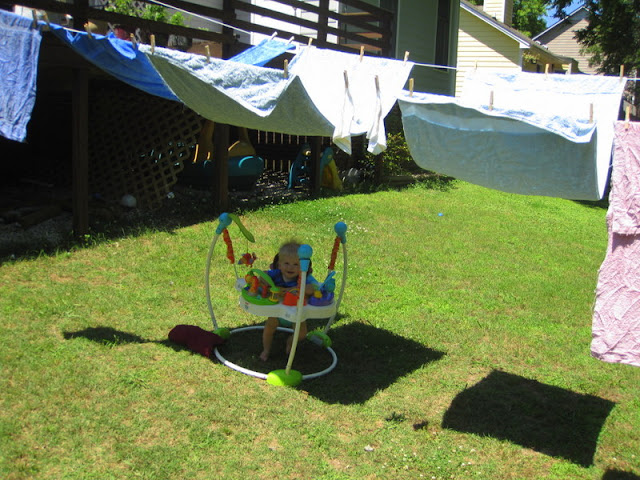 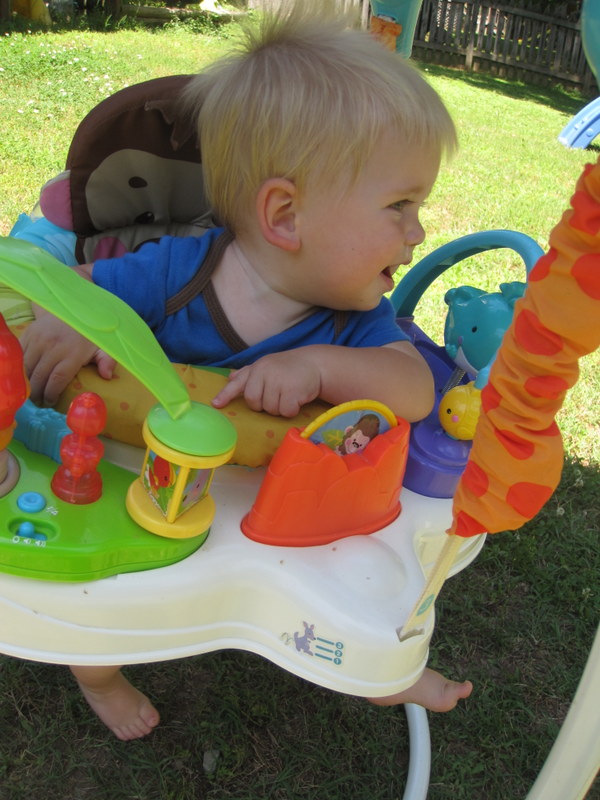 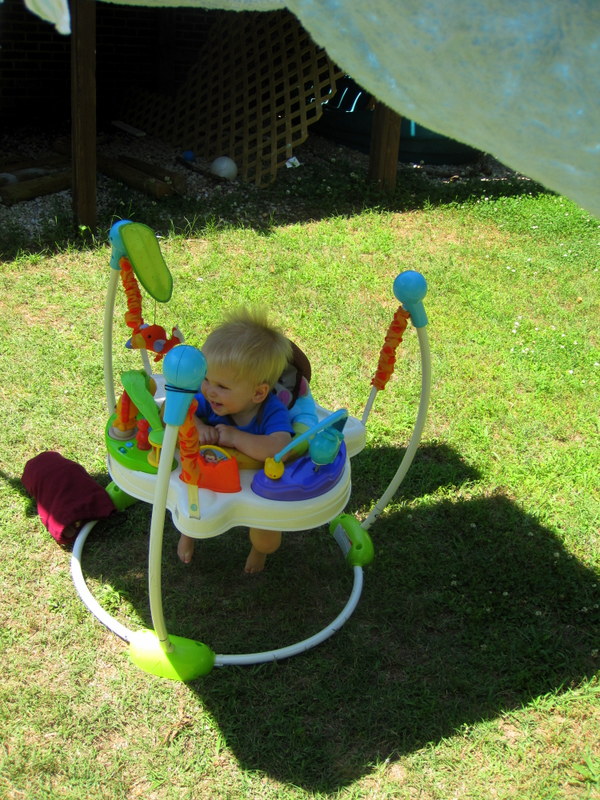 Miriam, meanwhile, was sent to her room to "finish" Benjamin's nap (a technique I just learned from my friend Geneen). She didn't think this was fair at all but at least stayed in her bedroom until she came out repentant and ready to put the dishes away properly.

While she did that, I finished putting up a fence around our garden. Kim recently gave us a bunch of yard stuff, not the least of which was some plastic "chicken wire": electric hedge trimmers, a weed wacker, a new shovel (ours might have broken when we were trying to dig out the holly bush...maybe), another rake, some bags of dirt, some pots, a trellis, a container of strawberry plants. Basically we took everything she didn't want to put in the moving truck.

I was super excited about the chicken fencing, though, because I've had so many people tell me that my garden was destined to be eaten by all the critters hiding in the woods: opossums, raccoons, squirrels, rabbits, turtles, deer...

We haven't actually seen many deer around this part of town (Kim said she's never had a problem with deer in her garden) but I know for a fact we have all the other things so I went online to look at how much it would cost to put up a little fence around our garden, a little apprehensive about spending more money on the garden. Fortunately Kim invited us over to harvest her garden tools before we went to the hardware store.

Using her wooden stakes and chicken fencing (and some velcro straps of our own), I put together this little fence: 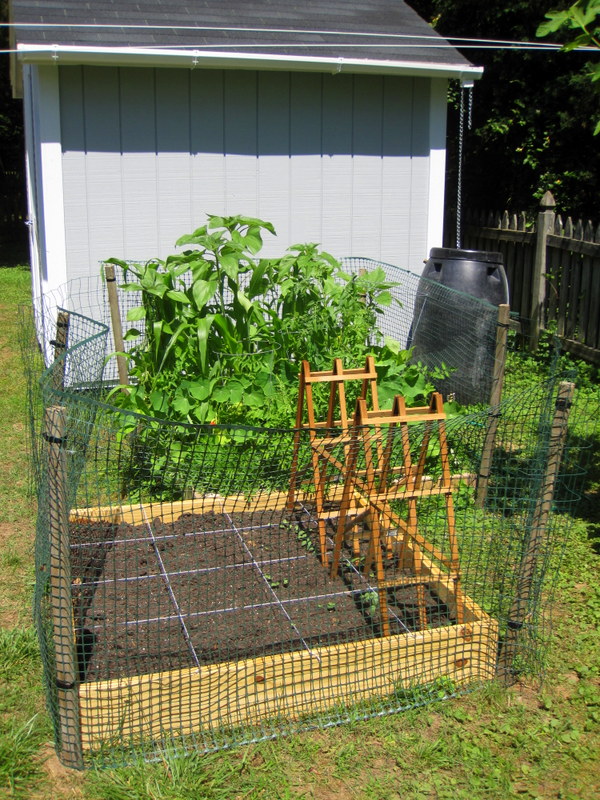 There's plastic stuff on two sides of each box that's somewhat "permanent" and then I have wire "gates" running between the corners of the garden so that I can still get inside to do things when I need to do things (which seems to be a daily occurrence).

Hopefully the fence will help keep pesky critters out. I'm sure it could be better constructed but for the price of free, I think it's pretty good.

So far our total garden harvest is three strawberries and one pod of peas, but our garden holds a lot of promise, like this tomato: 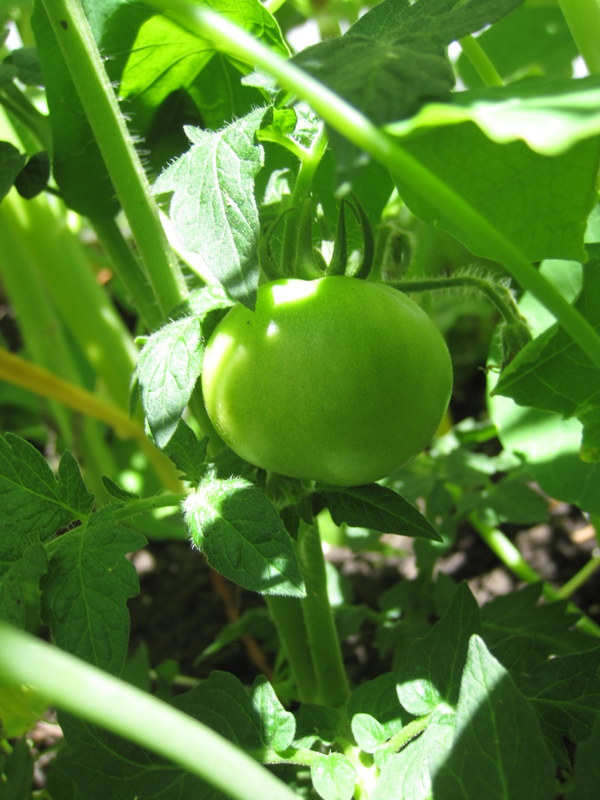 And these future tomatoes: 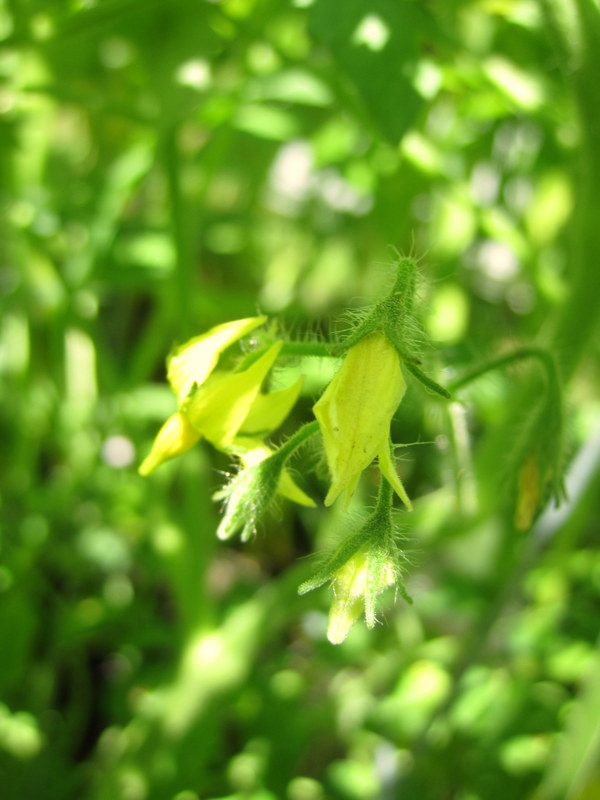 Similar things are happening with our green beans: 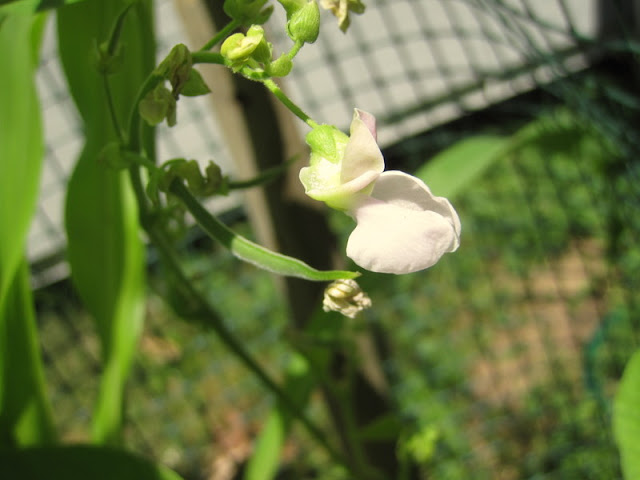 My nasturtiums are finally blooming, adding some colour to our garden, and the marigolds aren't far behind: 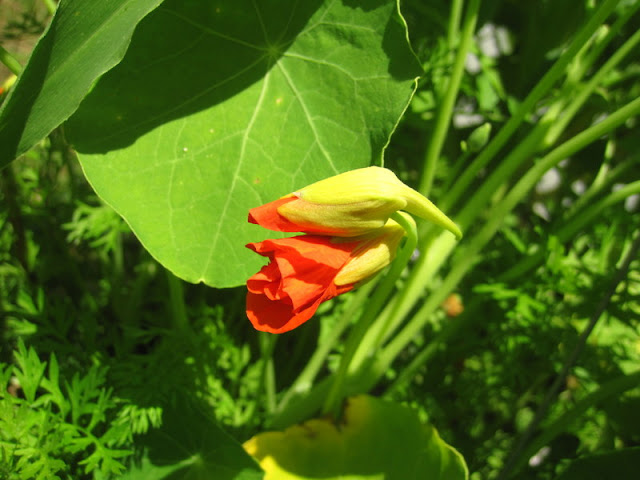 Things are looking pretty good, I guess. I mean, I don't really know how they should look. I'm just excited that things are growing. Our tallest sunflower is now as tall as, if not taller than, Rachel. I don't think I've ever grown a sunflower that tall in my life (except, of course, when Rachel was shorter). 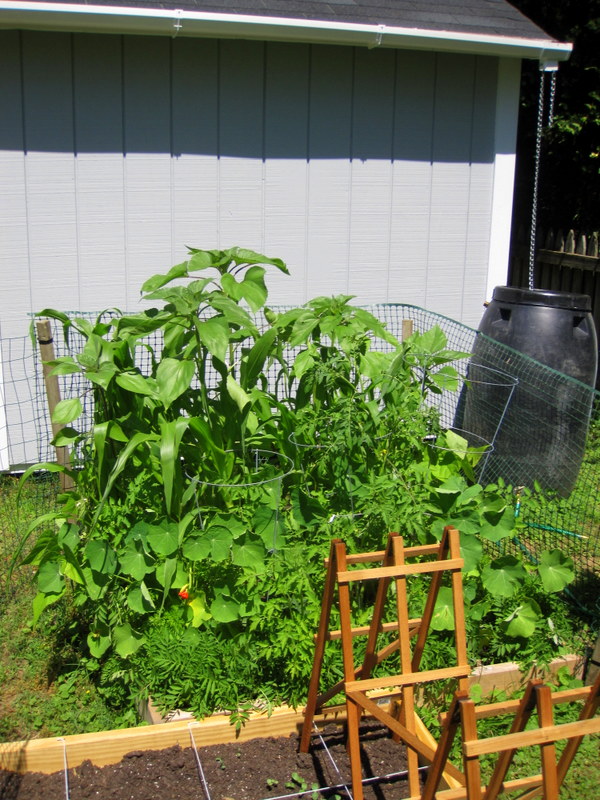 And here is my deck tomato plant—the one I grew from seed: 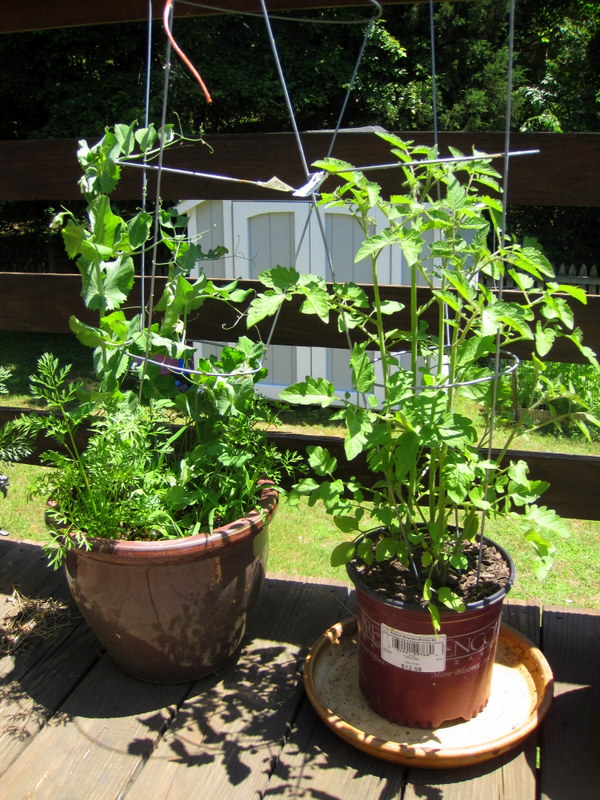 It's doing just fine and will be putting out flowers pretty soon, so I'm glad I didn't give up on it.

Actually, I planted some more tomato seeds in the garden when I planted the store bought tomatoes but I forgot that I did that so when they started coming up through the marigolds I thought I just had monster marigolds. They looked almost the same but were hairy and kept growing up and up and up. Now they're nearly as big as the store bought tomato plants. I think I'll try to remember that for next year when I think about starting plants inside: it's pointless; I may as well just start them outside.
Posted by Nancy at 4:09 PM