Strawberry season (which is much better than spider season) is here and the fields have been calling our name, so we picked Rachel up after school and headed for the hills (since there aren't any strawberry fields to speak of within city limits). The girls were excited to go on an adventure.

We went to Lyon Farms, over in Creedmor, mostly because we inherited some Lyon Farms baskets from some friends who will be moving soon. We have to cross Falls Lake to get from Durham to Creedmor (or anything else on the other side) and it makes us laugh every time because once when we were young and naive and knew next to nothing about Washington, DC, some friends of ours were discussing Falls Church.

We were pretty sure they said "False Church" until the last couple of years when we realized it was Falls, not False. But you can go around calling it False Church for years and no one will notice. We call Falls Lake False Lake just to laugh at ourselves.

Anyway, Lyon Farms was a cute place with a flair for originality. 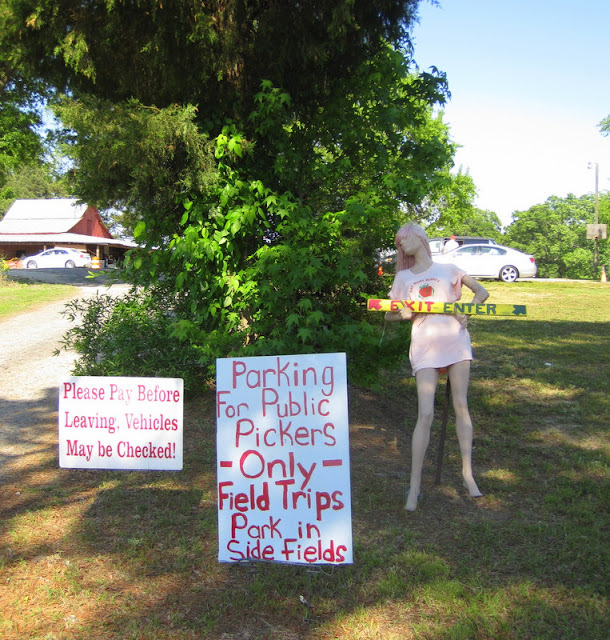 The girls were excited to grab their baskets and go but I made them lather themselves with sunscreen first. 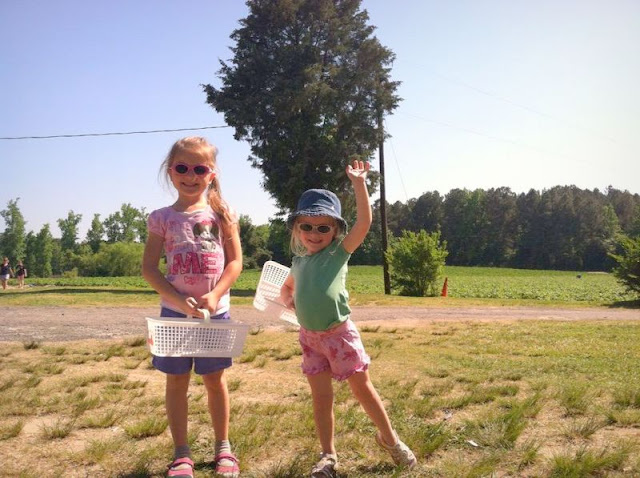 I even managed to smear some on Andrew—he burns so easily yet refuses to wear sunscreen. 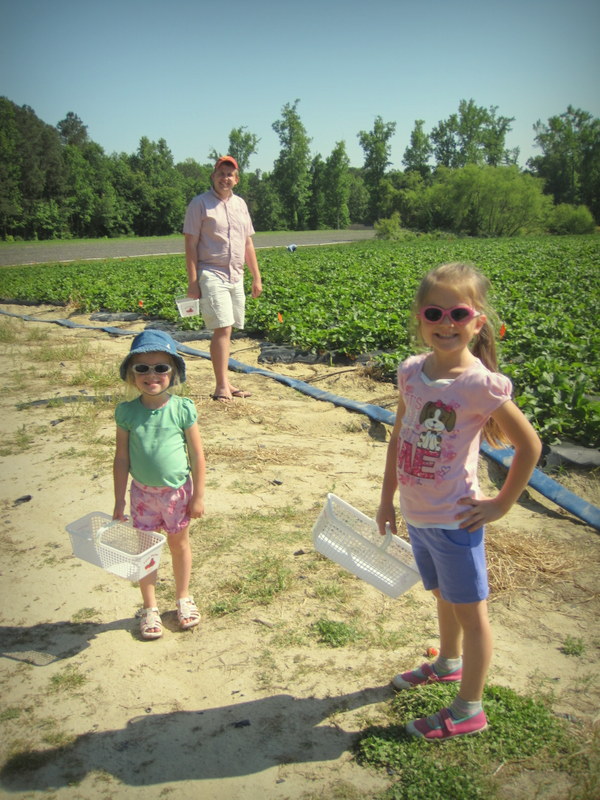 I couldn't find Benjamin's hat—it's floating around our house somewhere—but I did find two hats the girls used to wear. Miriam claimed one of them, even though it might be getting a tad too small, leaving Benjamin with the other, so he unfortunately spent the afternoon with the word 'princess' emblazoned across his forehead. It's an occupational hazard for a boy following two sisters, I suppose. 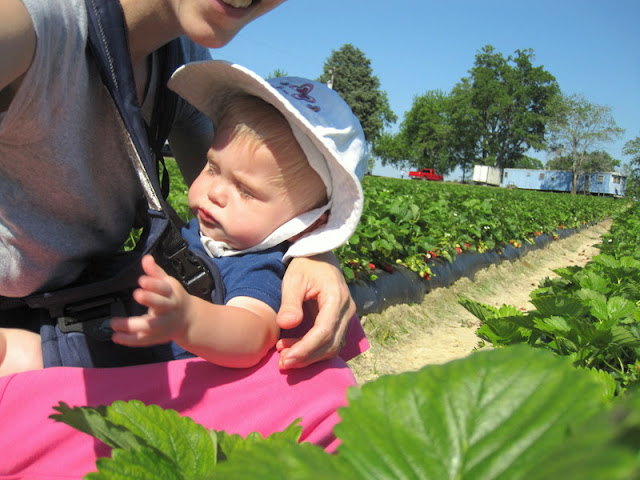 He didn't seem to mind though because he was much more interested in trying to grab all those juicy strawberries. 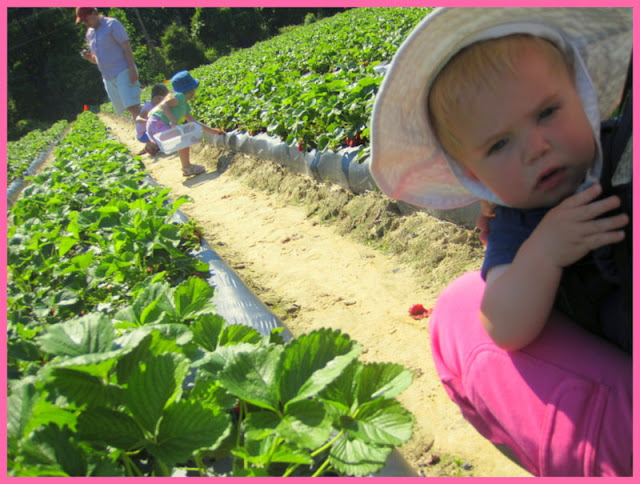 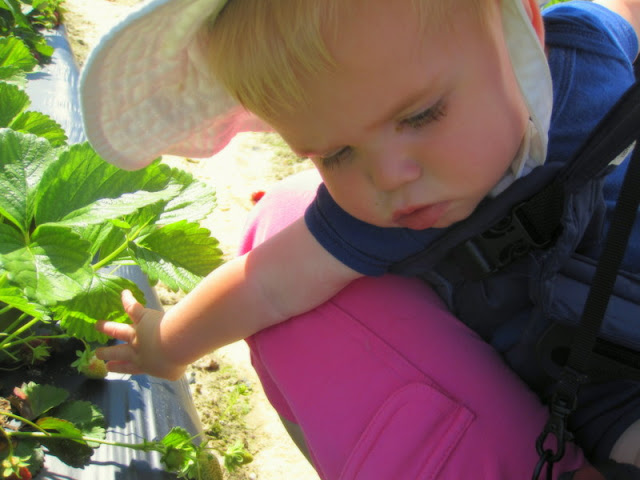 Having him in the front carrier made picking strawberries a fairly onerous task for me. He doesn't like it when I squat down with him in the carrier (he gets a little squished—so that's fairly understandable) and he squirms around and reaches for things, which throws off my center of balance. Not to mention, it just takes me a second longer to get in and out of a squat with an upcoming 20-lbs. baby than it does when I'm just me (I'm not sure how much he weighs, truthfully, but we'll find out next month). 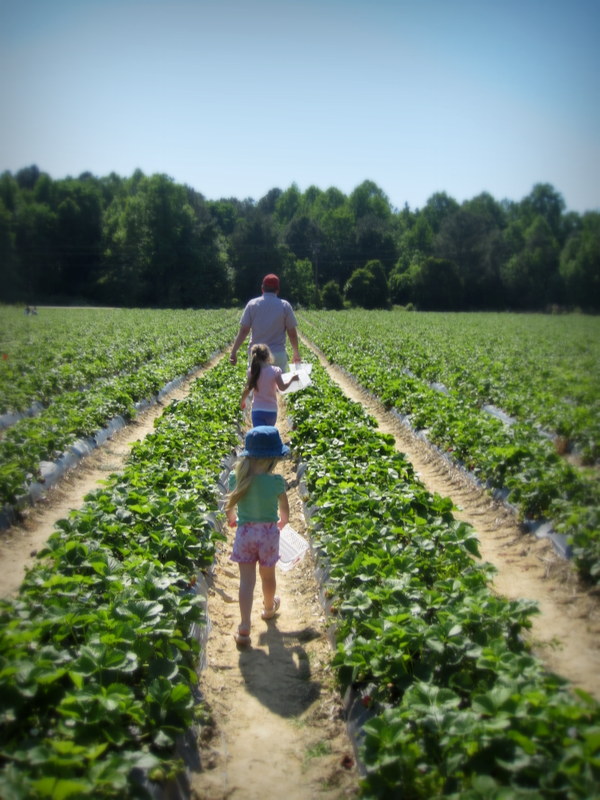 He and I kept getting lost in the dust, which was unfortunate because we only had three baskets and I wasn't holding one of them. I kept bending over to pick up strawberries and then would have to carry them over to Miriam to put them in her basket. She and I were sharing a basket. 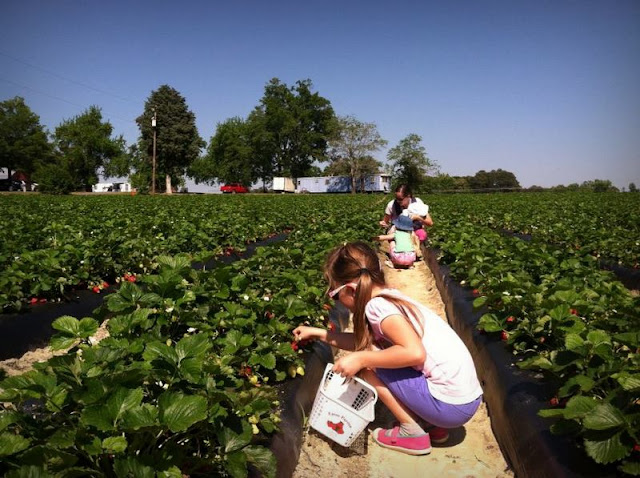 Eventually we all caught up with each other and filled our baskets full of sun-ripened, beautiful, juicy strawberries. 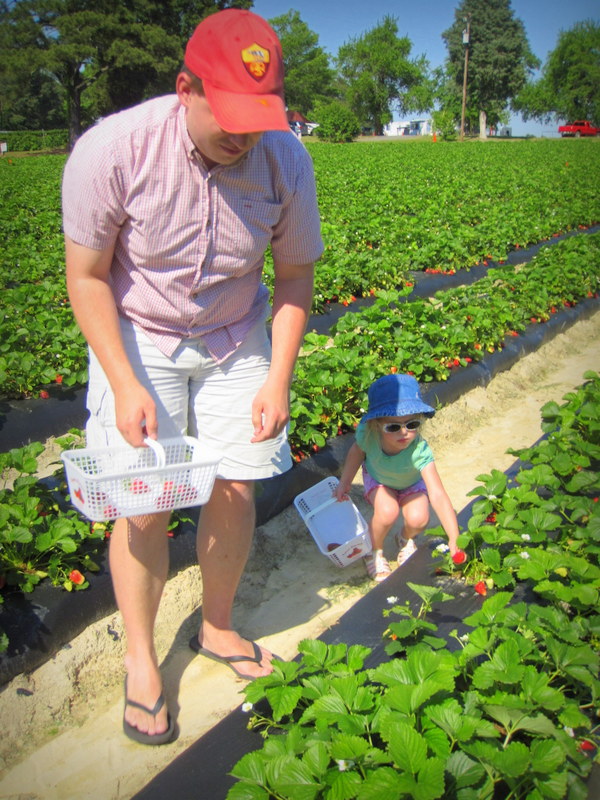 Rachel was excited the whole time we were out there. She kept showing us different strawberries she'd found—perfect ones, silly ones, little ones... 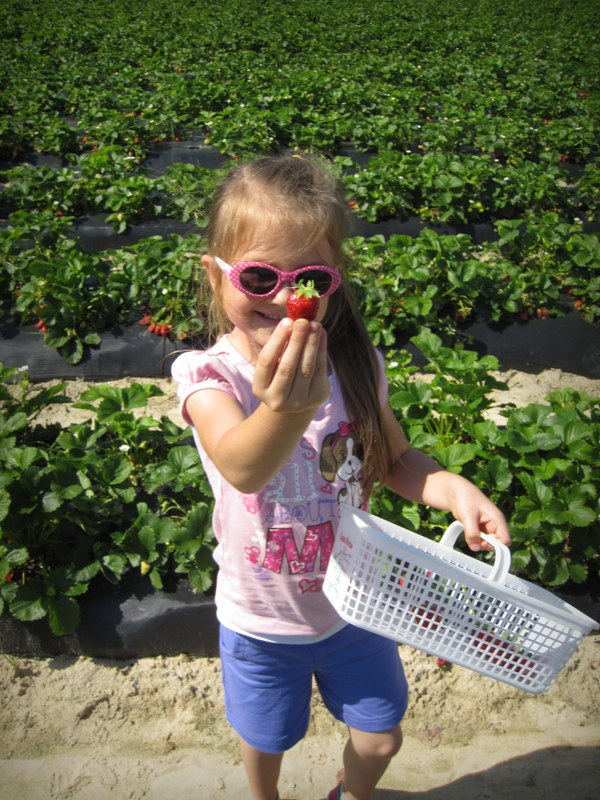 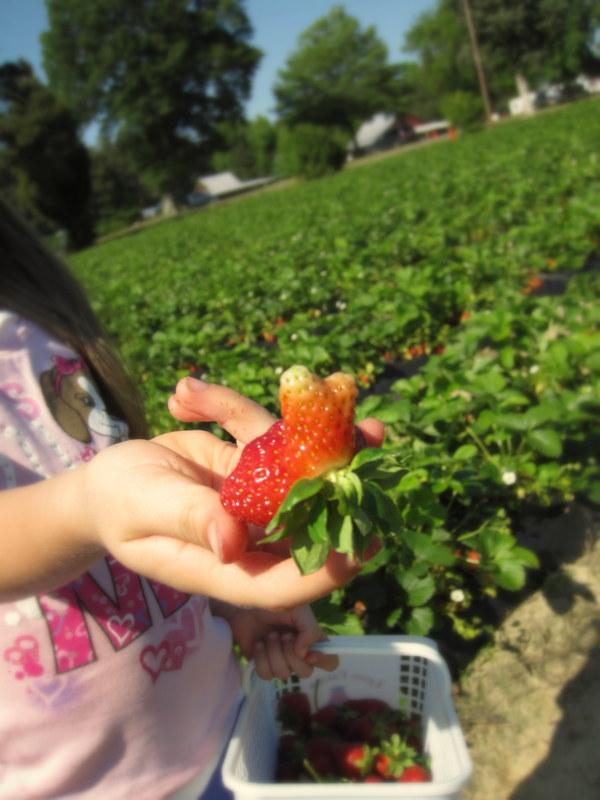 Miriam worked hard for a while but quickly petered out. The plants were itchy, the sun was hot, the basket was heavy... 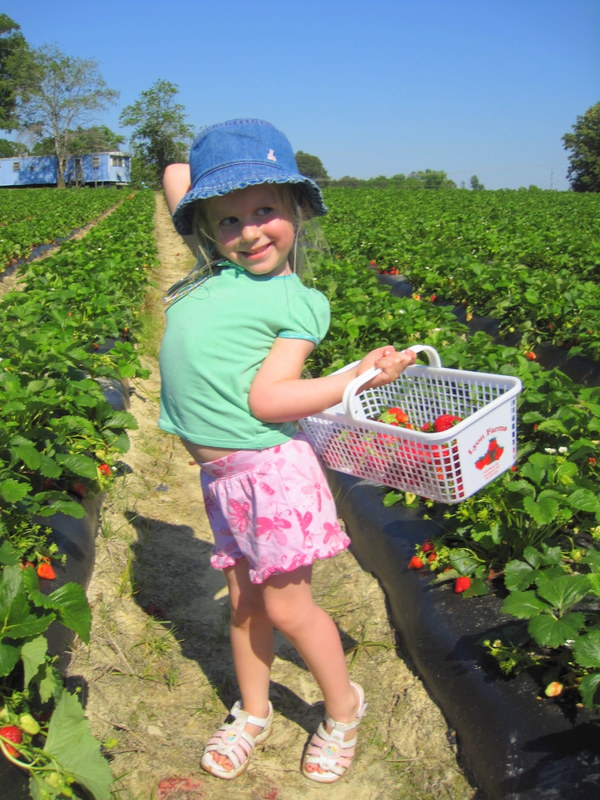 ...but each time she'd resign, she'd soon after spy another tempting strawberry and would stoop to pick it (and a few more). 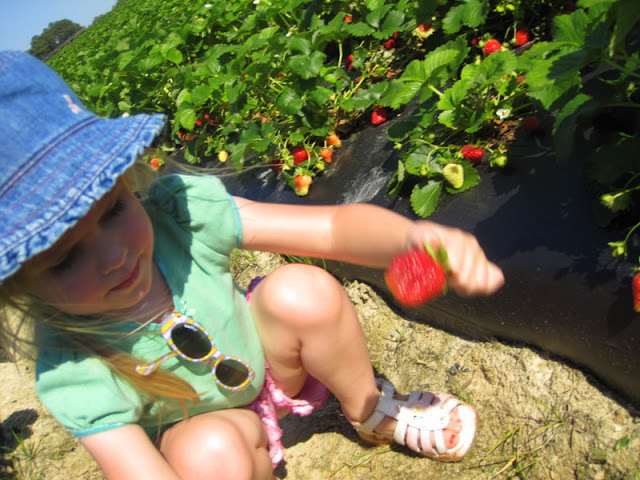 Then she'd hand me the basket and say, "I'm done." This was one of those times: 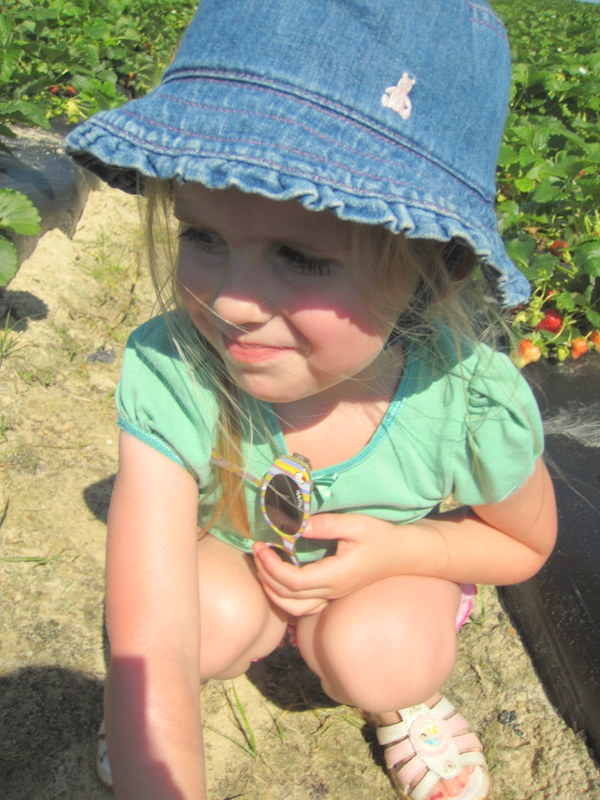 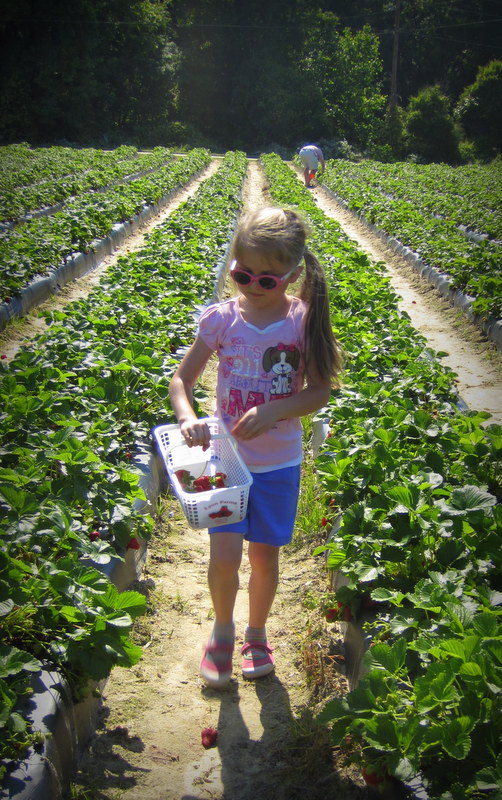 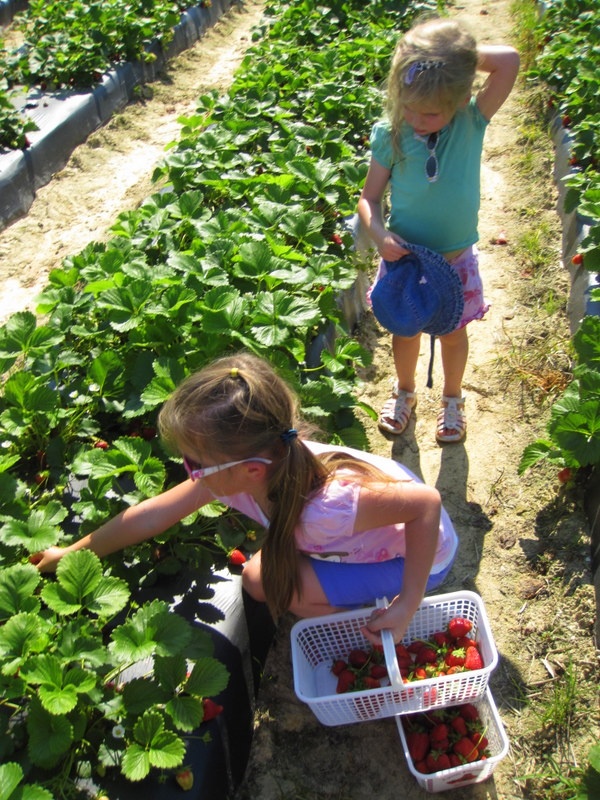 And here are the pictures Rachel took when I handed her the camera: 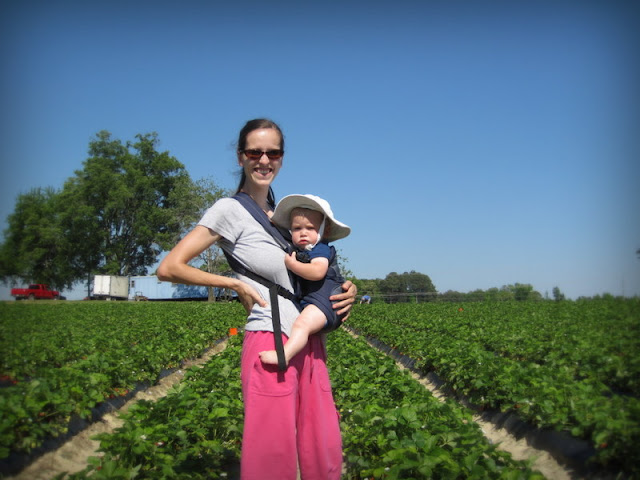 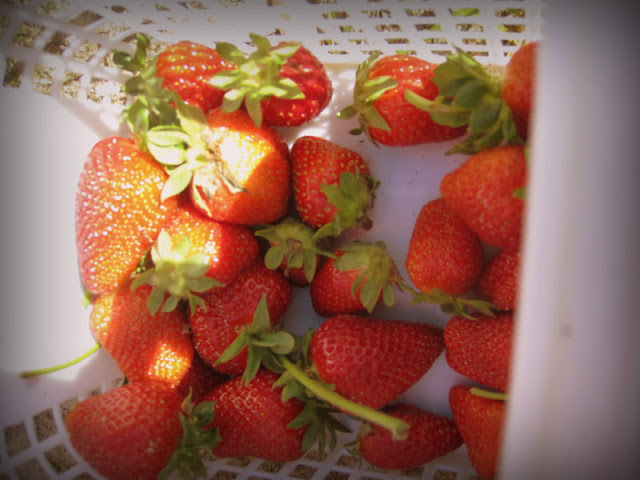 And here is a picture of me and the kids that totally cracks me up: 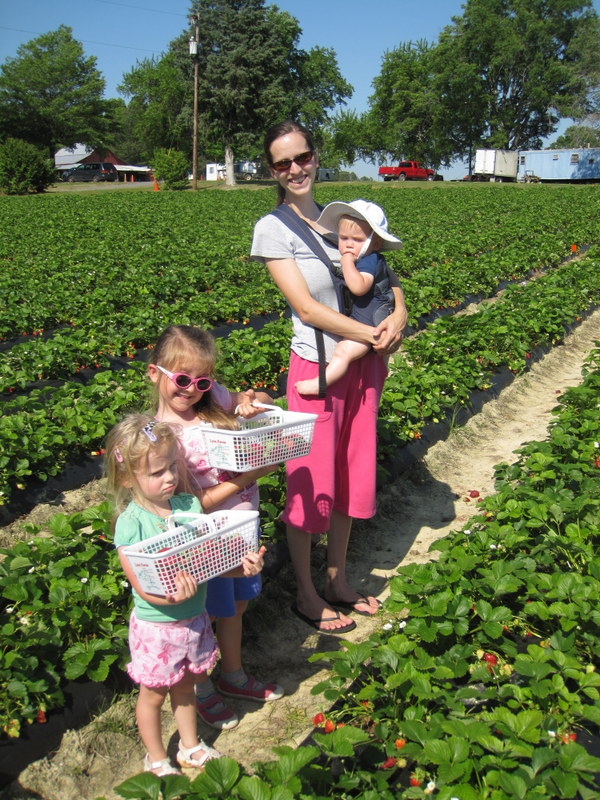 Yet here she is, back to work even though she's exhausted: 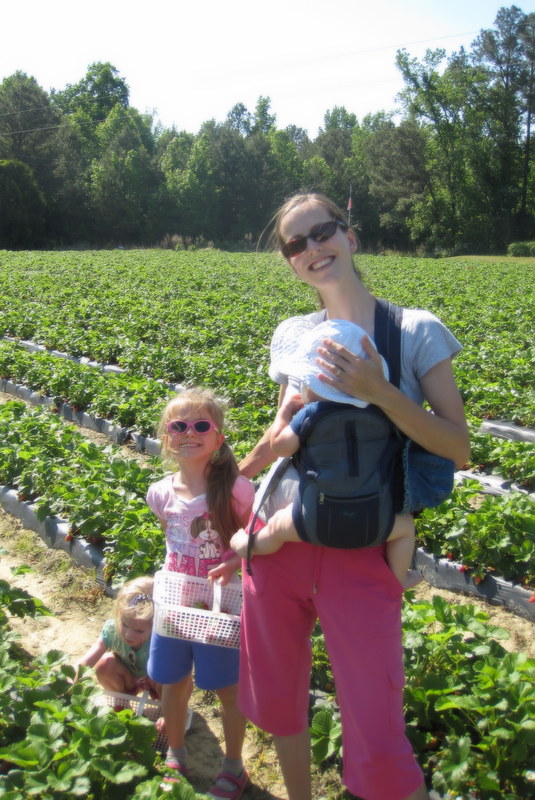 Those strawberries just looked so good! 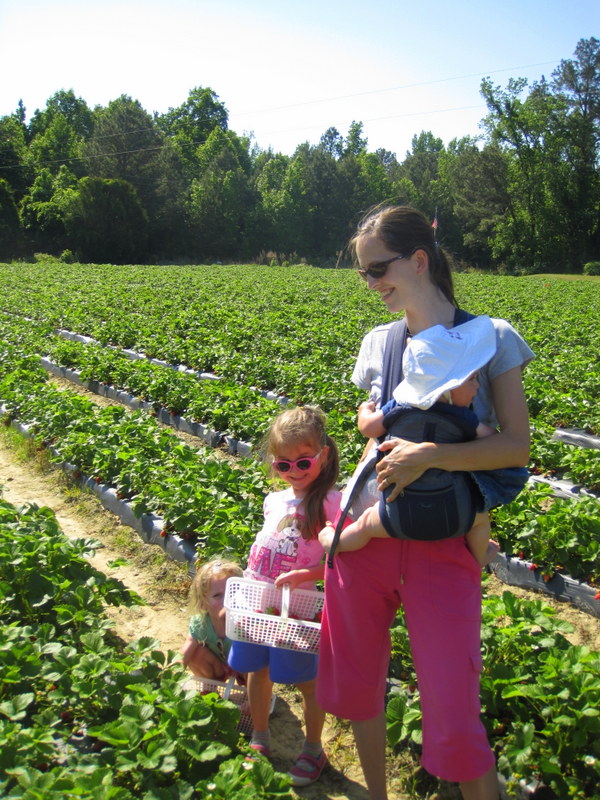 We ended up with 9 lbs. of perfect strawberries. At $1.25 a pound, it was a great deal, considering they were all picked at the peak of ripeness (as best we could manage, at any rate) and there are no rotten ones lurking at the bottom. It always seems that the packages from the stores are already rotting, but these strawberries are perfect.

Our van smelled so good the whole way home! 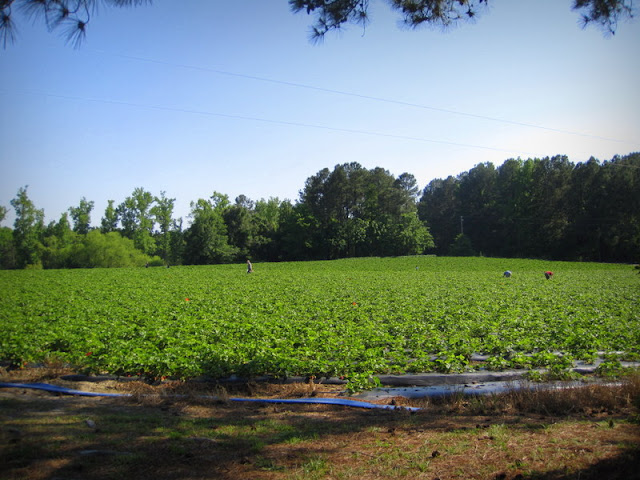 We stopped by Kroger on our way home to pick up an angel food cake so we could have it with strawberries for dessert, and it was devine. 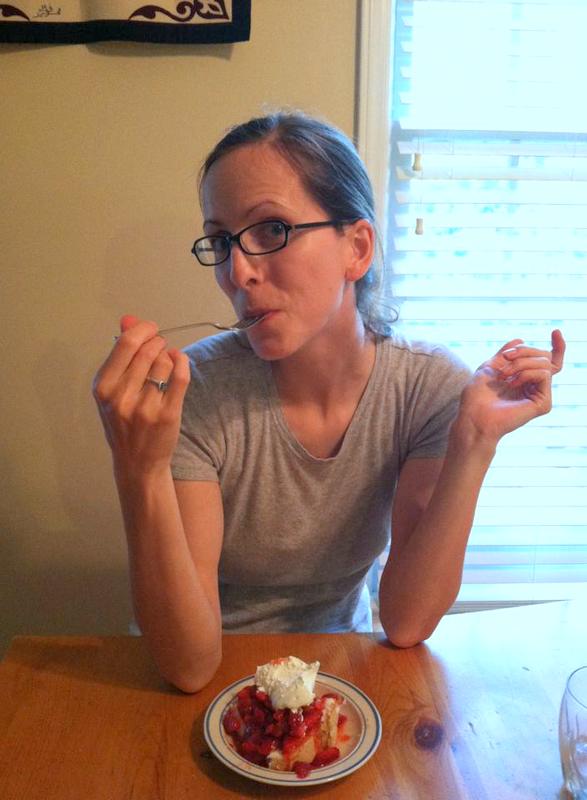 We finished off one entire basket of strawberries this evening and have two more baskets to work through. We'll definitely be making some more freezer jam since we've gone through our last batch like it's going out of style!
Posted by Nancy at 11:20 PM