Today was a long and draining day as well. I felt like I was running around like a chicken with its head cut off for the entire three hour block at church. Nothing seemed to be going quite as planned. For example, we're trying to coordinate male teachers for all of the classes next week to give our female teachers the opportunity to attend Relief Society meeting for Mother's Day. We needed—and got!—seven volunteers. I began emailing them their assignments (once home from my crazy day of running around at church) and even as I was still sending out emails began to get replies to my message saying that they were really sorry but wouldn't actually be available to substitute next week.

Four out of seven men replied saying that other things had come up. They forgot they had to teach elsewhere. Or they got called into work. Or their wife informed them they'd be vacationing.

All good excuses. All good intentions. But such a headache for me (and Marian, who I forwarded all the emails to).

But your babies can make it onto the front page of the local newspaper and that's just as good, right? 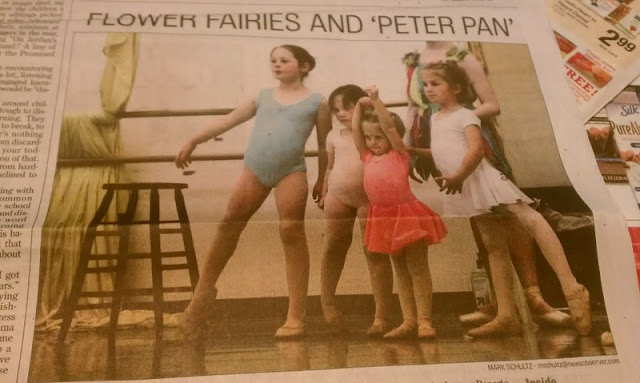 I had no idea until a woman in my ward sneaked into the back of the primary room to talk to me.

"I'm going to bring you a copy of today's paper next week," she told me.

She looked at me, smiled, and said, "You don't know?! There's a big picture of Rachel and Miriam on the front cover! Rachel looks very graceful but Miriam looks a little...wilted."

Rehearsals are long and tiring and a whole lot of responsibility is heaped upon that three-year-old's shoulders. Rachel handles it better—but she still gets tired, especially after yesterday when she took off her ballet slippers and stretched her toes.

Miriam had dissolved into tears from sheer exhaustion. She just collapsed into a heap on the floor, leaving me to remove her slippers for her. Noting this, Rachel remarked, "I feel like crying but I can't because I'm five and I really don't want anyone thinking I'm four or something. I don't think they'd think I was three because I'm a little too big for that but they might think I was four and that would be really embarrassing."

Yesterday was exhausting but last week's rehearsal wasn't so bad (it was only 45 minutes). In the middle of the girls' scene a photographer showed up to take some pictures of the dancers. Miriam (in the pink leotard with the skirt) and Rachel (in the white leotard with the skirt) ended up on the front page of The Durham News today (and also at newsobserver.com)! They are also in the picture of the kids sitting around Boleyn (Rachel is obvious, in white, and you can just see Miriam's bun (she's sitting beside Rachel)) and you can actually see Benjamin in the picture of "Wendy" spinning (he's in the doorway; I'm holding him).

Several friends have graciously offered their copies of the newspaper to us (since we don't get the paper). I think it will be fun for the girls to see themselves in a newspaper!

We're basically famous...because not only were the girls in the newspaper, but Rachel was also in a movie that's set to premiere this summer. You can see her in the trailer (at around 1:17). Who knows if she'll make it into the movie (my sister Josie once got a part that made it into the trailer but was cut when the film was released).

I just realized that Andrew did the girls' hair for ballet last week. So a big kudos to him for managing to leave the house with two very presentable ballerinas. I had the March of Dimes thing and left the house just as the girls were waking up. Fortunately I'd braided the girls' hair the night before and had Andrew practice tying their braids into a double knot and clipping the ends under, turning their braids into the cute ballerina buns that are required for class and rehearsal (because he would never have been able to manage forming a bun otherwise). The buns the girls are sporting in these photos are daddy-styled!