Strawberry picking must simply be a bigger thing down here than it is other places. Never have I ever had so many people ask me about whether or not I'd gone strawberry picking before in all my life. It's like the thing to do in the spring. Benjamin's participating in a dental study at the doctor's office and he had his first appointment today. The doctor we saw asked us straight out if we'd gone berry picking, just threw it into her smalltalk.

"Have you gone to pick strawberries yet?" she asked, as if it was our right—even our duty—to do so.

Fortunately, we went yesterday so we were able to rave about the strawberries with firsthand experience.

The appointment was easy (and we earned $50). We just had to fill out a survey about Benjamin's teeth and brushing habits. He had a short examination, got a little toothbrush to take home, and we were done (until our next appointment, approximately 18 months from now). The only thing Benjamin wouldn't do is let them look at his tongue. We did everything we could to convince him to stick it out, but he wouldn't. He wouldn't say, "Lalala," which is one of his favourite things to do (he sticks his tongue way out to say it). He wouldn't make rude noises with his tongue (another of his favourite past times). He just plain wouldn't stick out his tongue.

I noticed the chart they had sitting out and asked if they were trying to see if his tongue was loose or whether he was in need of a lingual frenectomy. They said that was exactly what they were looking for so I informed them that he had been tongue-tied but had already had his frenulum snipped. They'll still need to get a look at his tongue (for the study) but said that they'll have more opportunities to see it (when he's older and more cooperative (or uncooperative, depending on how you look at it) about sticking out his tongue).

His teeth look great, show no sign of decay, but, oh! that labial frenulum!

Apparently it's not unusual for these frenulum problems to go hand in hand. Since Benjamin was so tongue-tied it was no surprise (to the doctor) that he was also lip-tied (or whatever it's called when you have an over-achieving labial frenulum). She said to watch that area carefully (ie. avoid running the toothbrush over his frenulum) because there are a ton of nerves and blood vessels in the frenulum so it's a sensitive area of his mouth. We'll likely have to get it cut someday (if we can't "arrange" a "happy" accident like we did for Rachel last year (her friend Michael had an accidental frenectomy at the park just a while ago, too (walked too close to the swingset—BAM! Free frenectomy. Just like that)). Those methods are so messy and painful, though (and sometimes, as in Rachel's case, the recipient doesn't even need a frenectomy)).*

Having children is so educational.


This afternoon both Miriam and Benjamin took a nap at the same time which hasn't happened in...ever?  It's been so long that I'm not sure if it's ever happened. It probably has. But it's possible it hasn't. At any rate, Miriam went down for a nap because she was out of control and Benjamin went down for a nap and then Andrew and I made jam and then I cleaned off my desk (somewhat) and then started making strawberry parfaits with Miriam (she was up; it was a short nap) and then we picked Rachel up from the bus stop and then we finished making strawberry parfaits. The girls wanted to eat them but they were for dessert so they took Benjamin and shut themselves in his room and put pillows and blankets all over the floor so that he couldn't hurt himself on anything and then they played around on our keyboard and were all happy as could be.

I made dinner—these, more or less. They were a hit and hardly took any time at all. We were finished with dinner and clean up by 6:30 so we went on a family walk.

I almost chickened out because there was a spider on the wheel of the stroller and its legs were touching either side of the wheel... 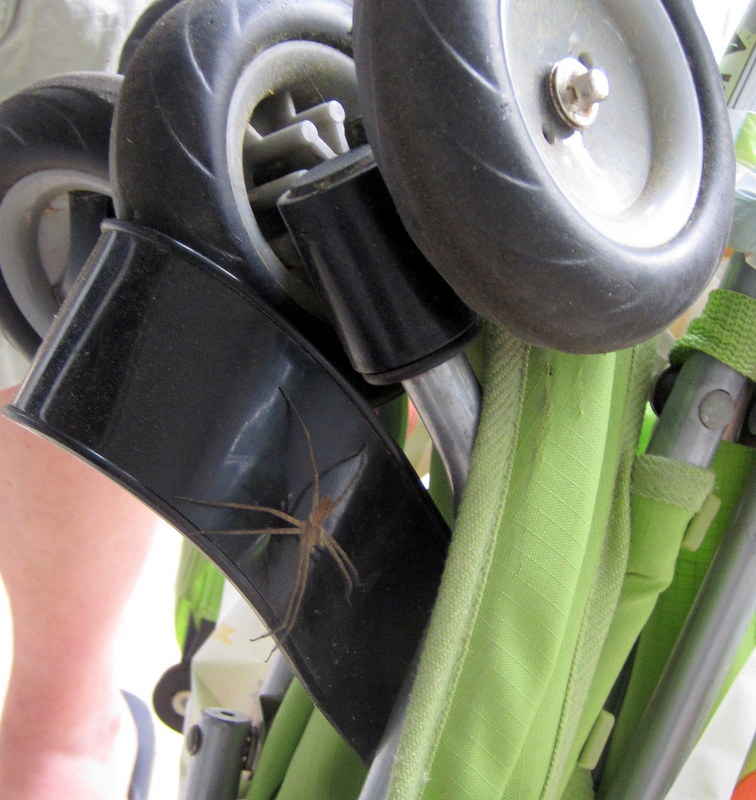 ...but Andrew just shook him off the stroller and we went on our merry way.

Because Miriam took a nap, she got to stay up late. I say it that way because it makes me feel like I'm in control of the situation, like I was granting her permission to stay up late. In reality her circadian rhythm was all thrown off and she couldn't fall asleep, so she was up. Miriam composed the following for you, all by herself:

And this is what she told me to type:

Daddy and Rachel and Benjaboy and Mommy and me went for a walk and I was running around from the doggy so it won't peck me because I don't like peckies. We goed on a long walk and we sawed flowers. We walked on just the road and I fell down on the street. Benjaboy has a cute face on and he has blue, blue eyes. Who's a little bub-bub-baby-boy? Ticka, ticka, ticka... Oooh! See when I do that he laughs. He's so cute. Oh, who's so cute? The Benjaboy is cute...

At this point her narrative fell to pieces (obviously) and she continued to get Benjamin all wound up. She loves him a lot. He loves her a lot, too (when he isn't terrified of her).

So, yes, we went on a walk, in our pyjamas and flip flops. Rachel kept trying to get us all to skip holding hands and I kept saying that skipping while a) holding hands and b) wearing flip flops is a bad idea because a) flip flops are trippy and b) we all have such varying levels of gross motor skills and c) pavement. She insisted that it would be fun (and she loves to have fun) so she grabbed Miriam and started skipping down the street.

Miriam soon fell down because a) she's three and can't really skip, b) she was being yanked around to her sister's cantering rhythm, which was not in concert with her own, and c) she's kind of a klutz in general.

It wasn't a terrible fall. No blood was involved (though tears were). Rachel felt guilty because I'd told her no and she knew it but disobeyed (because it was going to be fun) and then found out that I was right all along (I often am when it comes to scenarios like this).

Everyone survived the walk though, even if I had to carry Miriam for a bit so that she could recover.

We also saw a dog on our walk and I am not a dog-loving person but this puppy was so cute that almost he persuadeth me to want a puppy. It was the most adorable Sadie-dog (which is what we call all dachshunds, thanks to Auntie Emily's puppy). Its owner told us that it was a chiweenie (a cross between a chihuahua and a dachshund (also known as a Mexican hotdog)). It was so cute. 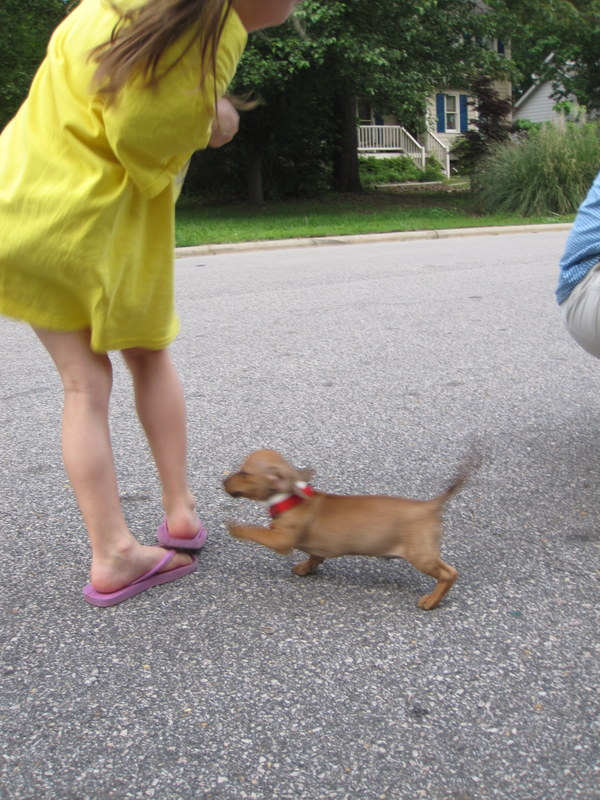 And tiny, yet terrifying. Miriam was almost crying (I had to pick her up) and Rachel was torn between running away screaming and coming back to see the puppy again. 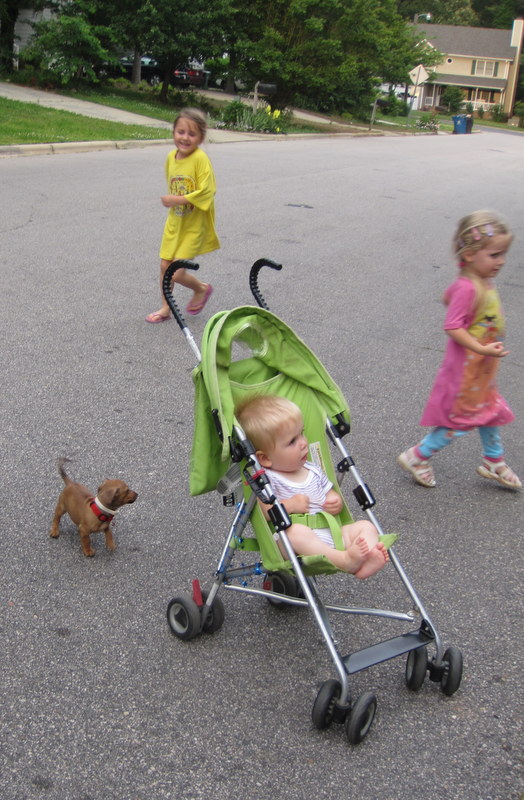 Like I said, I ordinarily am not very fond of dogs, but I think I would've gladly taken that sweet puppy home if it was offered to me. The horrible thing about puppies is that they grow into dogs, but even full-grown chiweenies aren't usually more than 8 lbs. I could handle an eight-pound dog. But I think I have my hands full with all these kids, wouldn't you say? Also, dogs smell bad. 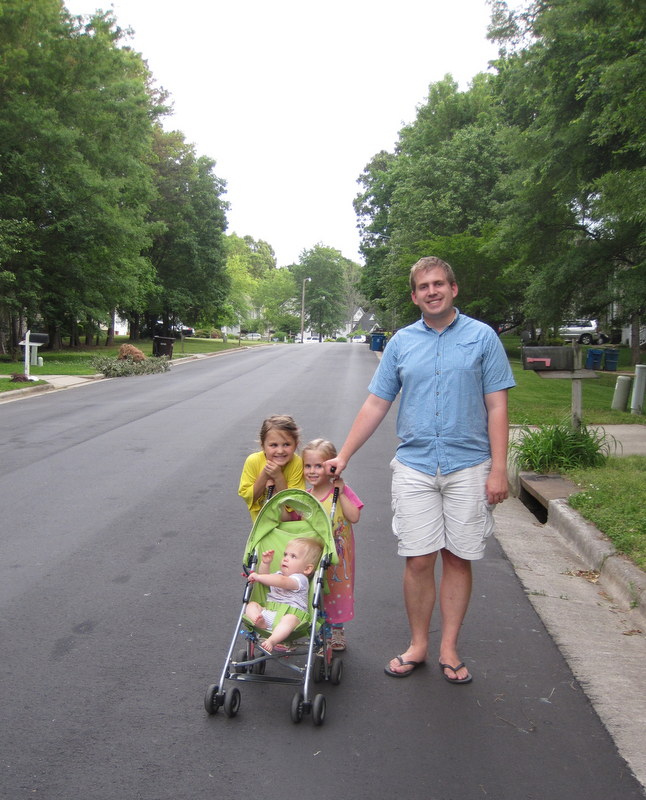 Now the children are all in bed (finally—I mean, it's only 10:30) and the kitchen is clean (which is a real treat because I usually clean it after they're all in bed) so maybe I'll start post about Rachel's schoolwork. I cleaned off my desk, remember, which means I've unearthed a motherlode of children's artwork.

*PS, Geneen, my doctor said that depending on the tenacity of the frenulum, it will reattach, so you might not be out of the water forever with Michael. Also, I hope his mouth feels better.
Posted by Nancy at 10:30 PM