Yesterday Rachel didn't go to school because she threw up in the morning, due to coughing. I tried to convince her to go to school, told her she wasn't really sick, but she held her ground. You're not supposed to go to school on the day you throw up, she informed me. She needed to stay home and rest.

She is sick, but just with a cold. Her awesome esophagus is the only reason she throws up all the time; it has little to do with her stomach at all.

This morning we overslept a bit but would have had her ready for school on time, had she not thrown up twice due to coughing. She had been so bored yesterday, though, that she insisted that she wanted to go to school in spite of having vomited twice. Her cough is always the worst in the morning, anyway, so I figured she'd already had the worst of it for the day.

We gave her cough medicine and then I drove her to school, leaving Andrew at home with a just-awake Miriam and a still-sleeping Benjamin. I stayed and volunteered in Rachel's classroom for the morning and she did fine so I let her stay for the afternoon.

Technically, I could have gone to the "Volunteer Tea" that afternoon, but I had to get home to my babies. And I had no desire to go since I know no one else who volunteers at the school so it would have been a real stretch for my introverted spirit to put itself out there and meet new people. I might have made myself go had we been staying at Rachel's school next year but since she's switching schools anyway I had no desire to put myself out there and meet new people.

So I came home and gardened and Andrew cut the extension cord in half when he was trimming the hedges (but he's fine (and it seems to be something that happens a lot)) and he fixed that. He was so proud of himself when he finished. I was pretty impressed, myself.

"I just did my first electric work!" he said proudly once he'd finished putting the cord together.

We used a velcro strap to hold the cord out of the way of the blades while he finished trimming the hedges and it worked out a lot better.

When Rachel came home from school the girls practiced riding their bikes. 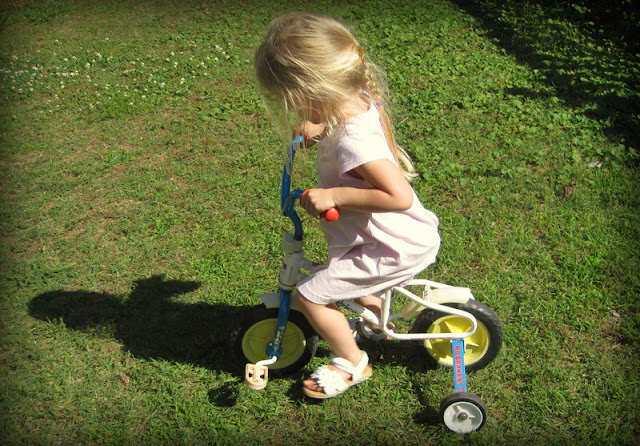 I convinced Miriam to try pedaling her little two-wheeler instead of scooting along on her tricycle with her feet and she figured it out. It probably would have been a lot easier for her to ride on cement than on the grass but Rachel's been working at figuring out how to balance on her bike so we stuck to the backyard. 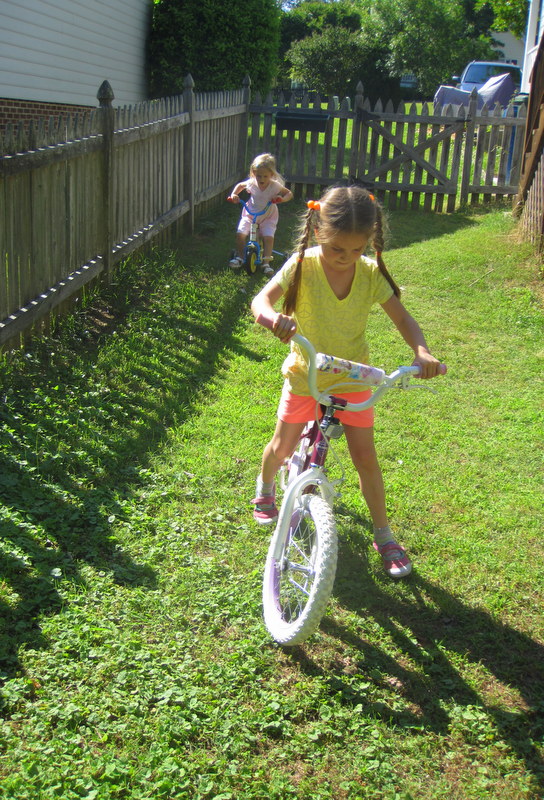 I took Rachel's pedals off her bike a few months ago to turn her bike into a balance bike of sorts. She practices gliding down the slope of our backyard and at first she was rather timid but she is slowly gaining confidence. She keeps asking when we can put the pedals back on her bike and I keep telling her the answer is when she's in control of the bike (rather than letting her bike be in control of the ride). She'll often go skidding off into the fence or will start to fall over and will simply let go of the bike and bail. So we're practicing steering and gliding and catching our balance. 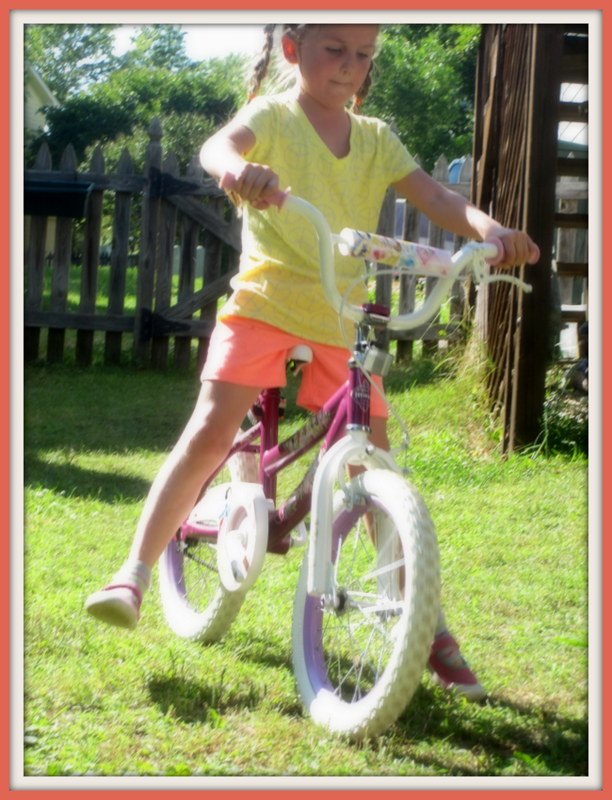 When we first saw the tutorial about teaching children how to ride bikes with this method the author mentioned that some people learn to ride a bike in a day and others take weeks or months. 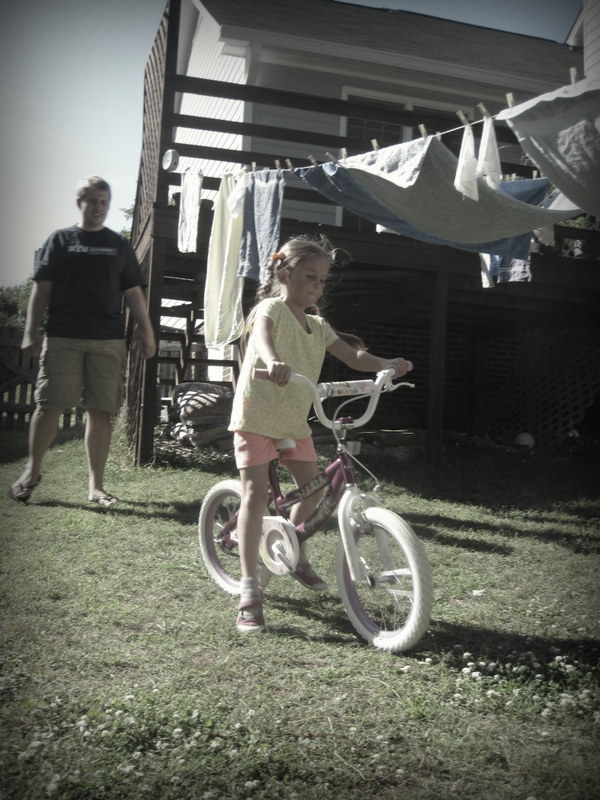 Rachel's fairly determined but she definitely falls into the weeks/months category. Giving her riding lessons tries my patience and I can get a little snippy. For example:

"Ouch. That was quite the fall. Remember that you don't have to fall over. You can just use your foot as a kickstand. Are you alright?" I'll say to Rachel, pulling the bike off of her. When she feels the bike start to tip she'll let go of the handlebars and do this awkward jump off the bike, which will then come crashing down on top of her. As scary as it might seem, she'd probably fare a lot better if she'd just stick her ground and stay on the bike.

"Do you want to give it another try or take a break? Your decision," I'll say.

"Then let's get your bike back up to the top of the hill."

She'll then start to throw a full-on fit. "But my knee hurts. I'm tired. I just need to rest. I always fall off. I hate riding my bike. Why are you making me do this?"

"Don't put my bike down! Take it to the top of the hill. I want to try again!"

So we'll get her bike to the top of the hill and she'll throw another fit.

"I can't do it! I'll crash again! I'll never learn how to ride a bike. I can't even get on my bike! See? I just keep falling over. I can't do this. Every time I try to do it I can't do it so I just should stop trying. I hate riding bikes. I can't do it!"

"What does Ms. Reeves say about the word 'can't?'"

Then in the prime of all my mothering grace I said, "Oh, shut up already!"

And that's why Andrew's out there with us. He's a lot more patient with her wishy-washy determination than I am. She wants to try so hard but is terrified and while I understand where she's coming from I just can't handle all the raw emotion she exudes. So our home life is going to be pretty awesome once her hormones kick in, I can tell.

Miriam comes with her own set of challenges. This, for example, is the position she takes every time she sees a bug (which is often). 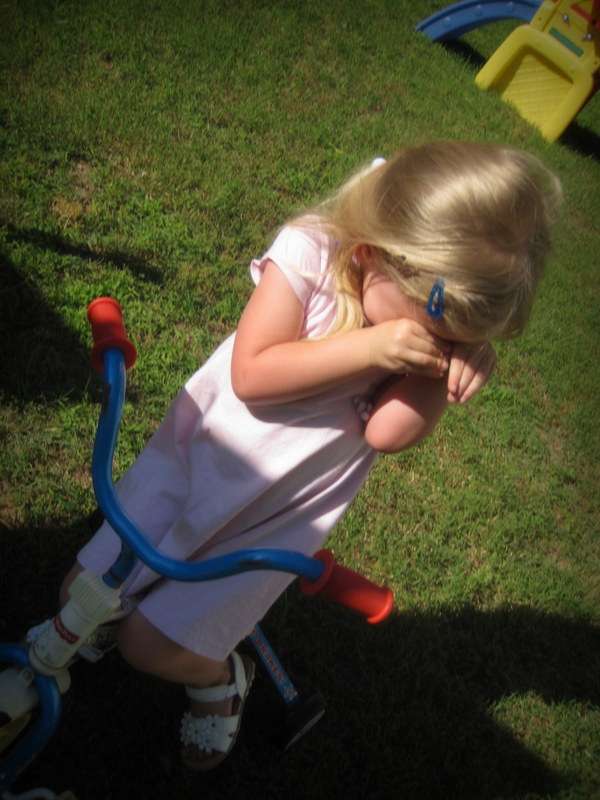 Benjamin was getting antsy being in the bouncer, so I brought out a container of water for him to splash in.

"Ooh! His own little water table for him to experience with!" Rachel cooed. Naturally she meant "experiment." Equally naturally it didn't turn out to be the gentle discovery activity I'd intended it to be for the baby. Instead it turned into big-sisters-taking-over-everything. I probably should have seen that coming. 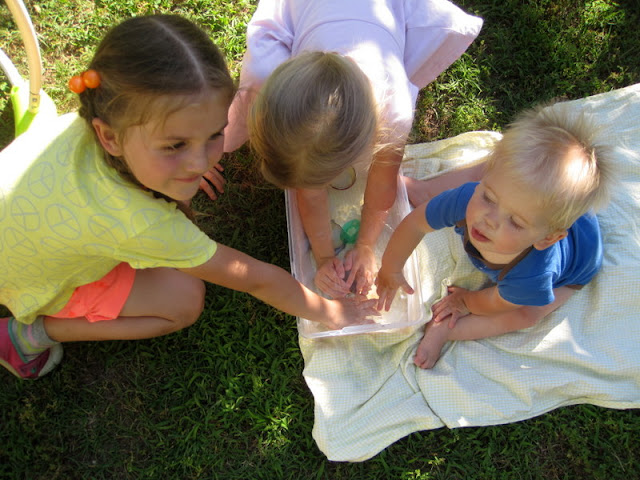 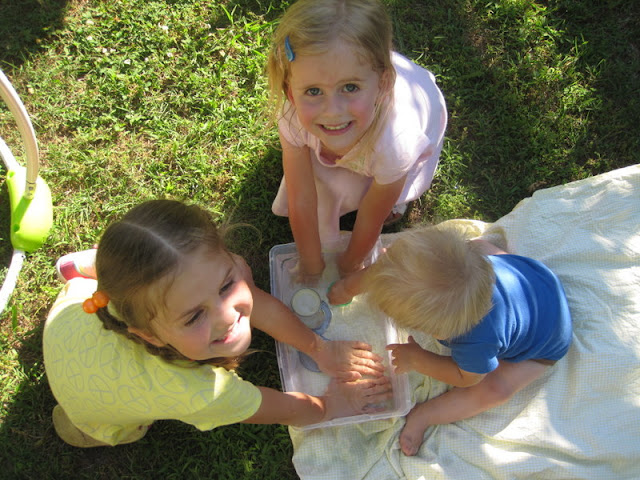 I think they all had fun though. 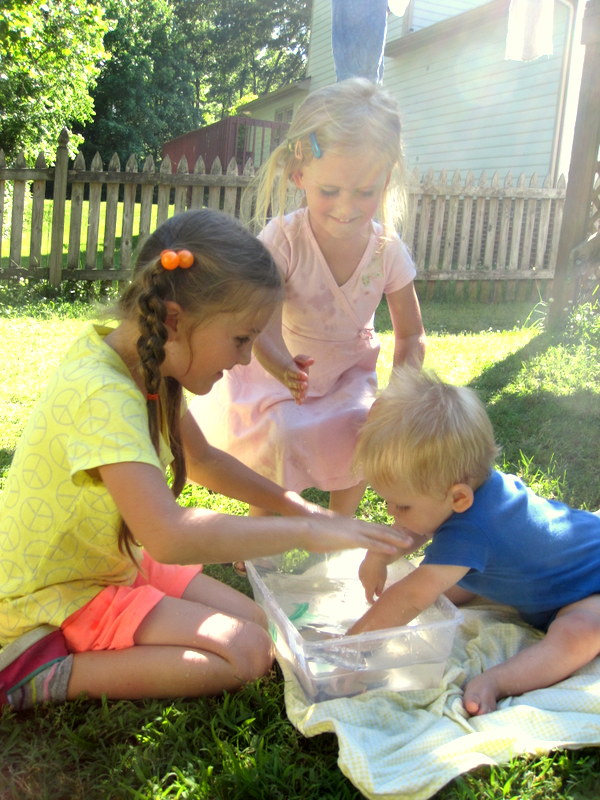 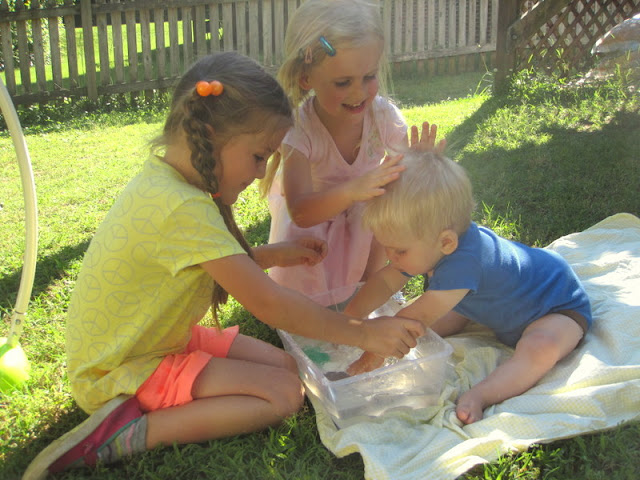 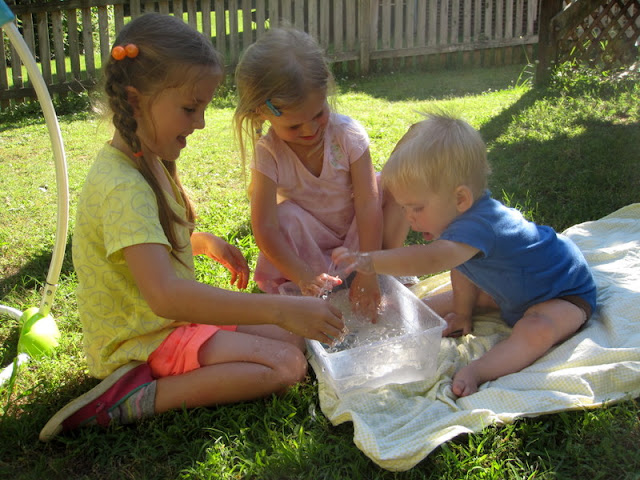 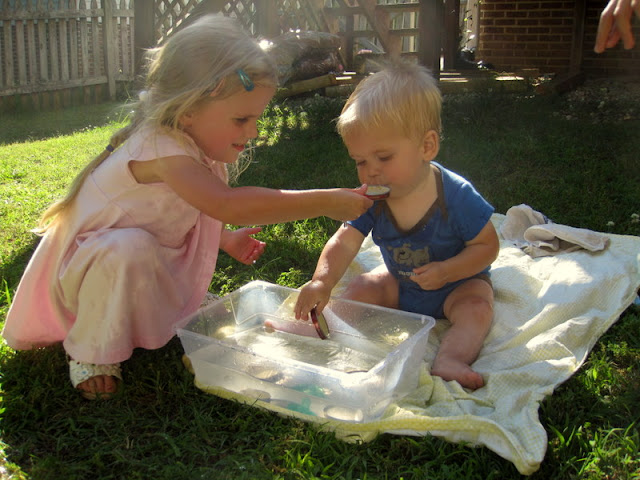 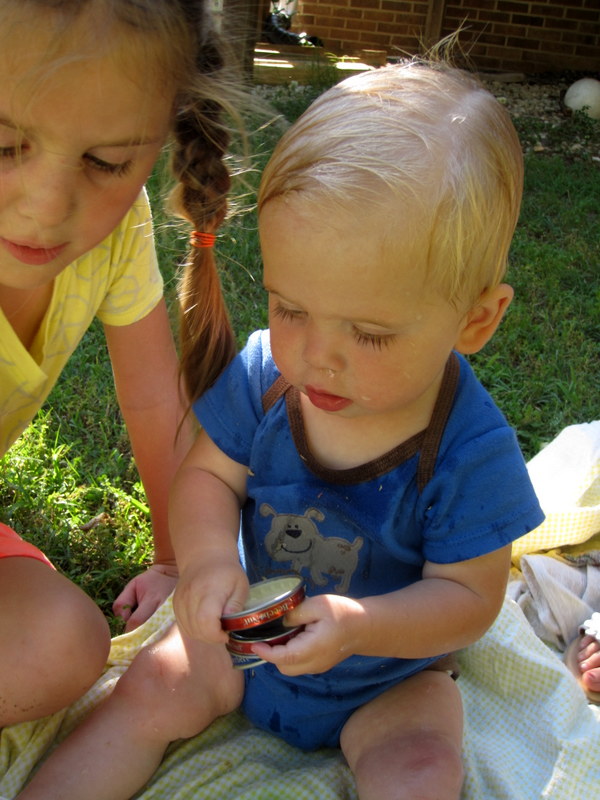 Benjamin ended up getting the wettest, by far. 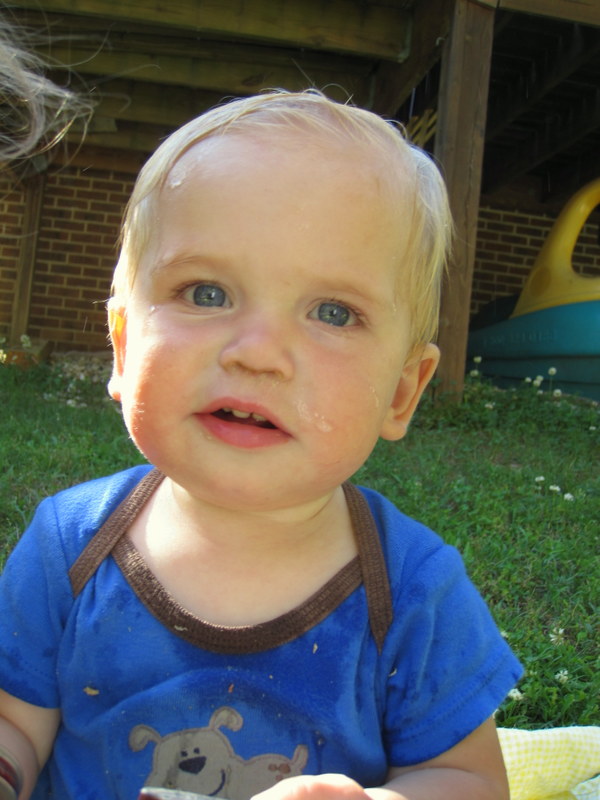 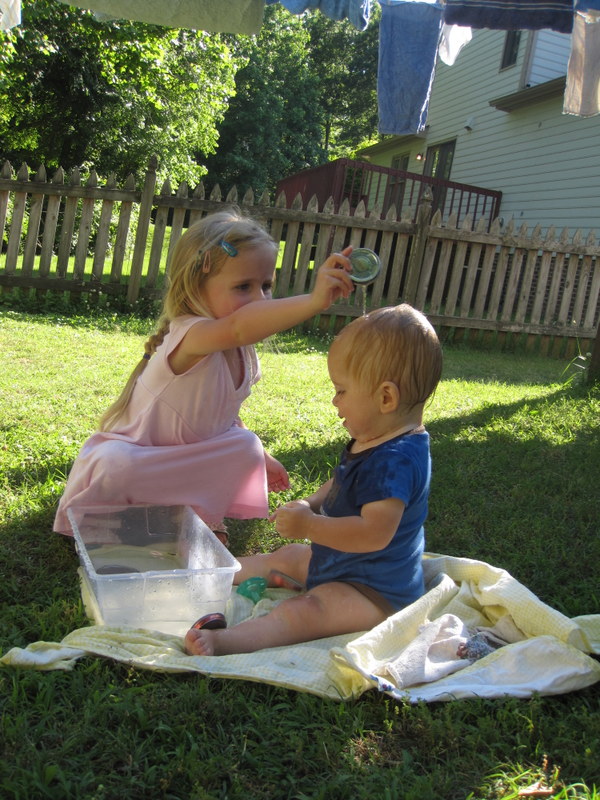 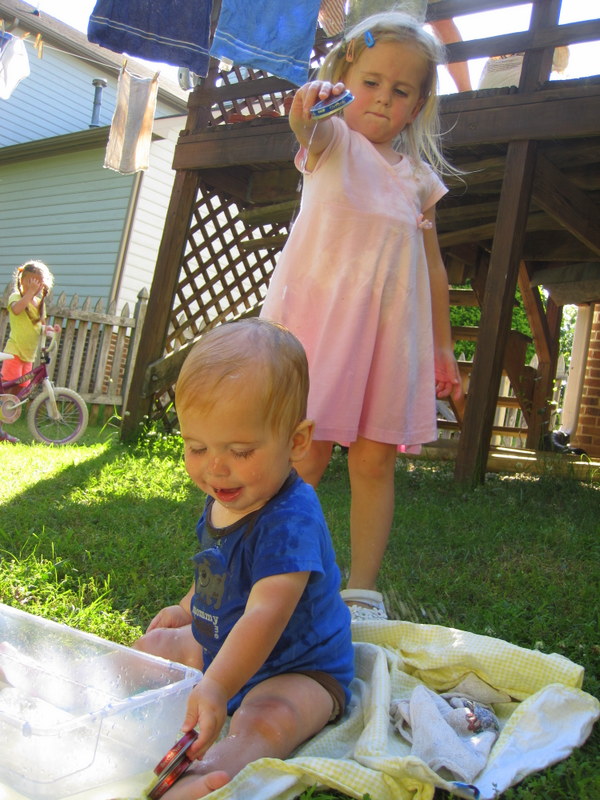 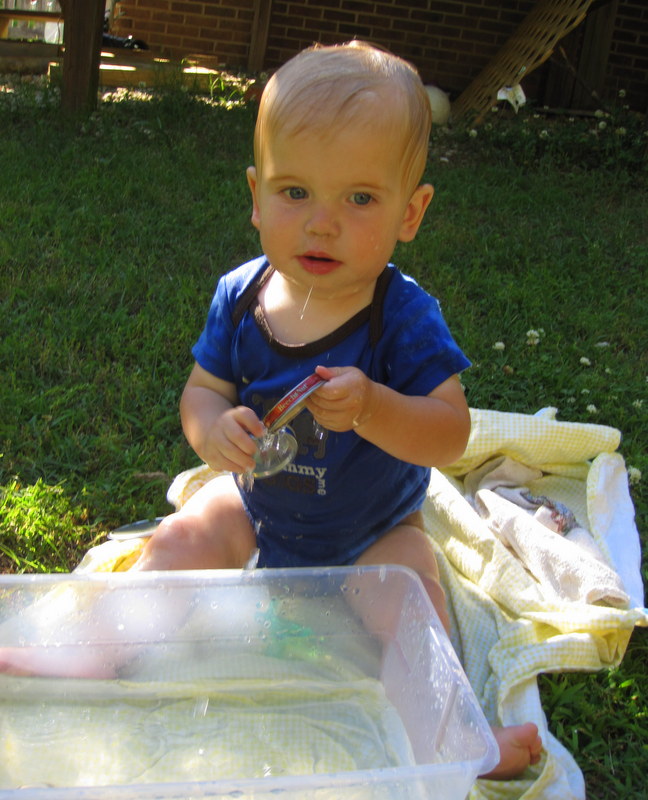 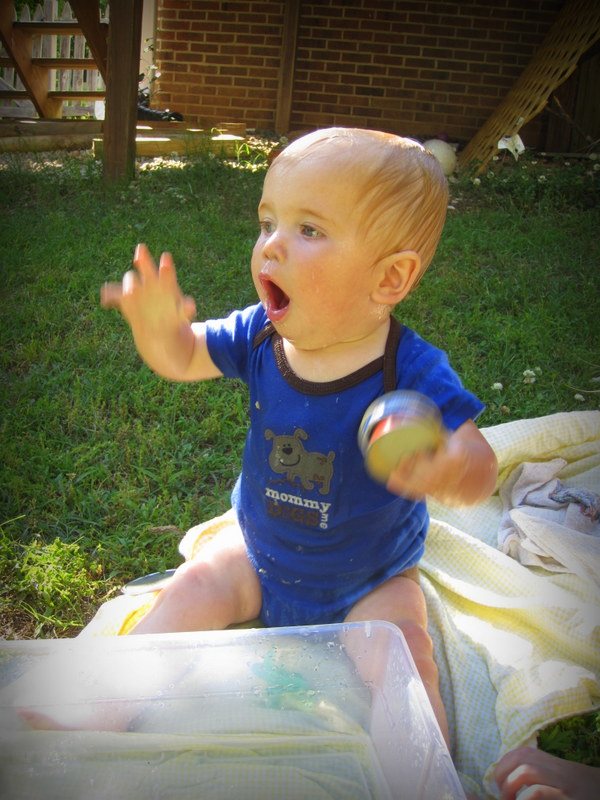 I don't think he minded too much, though, because he doesn't like being hot. 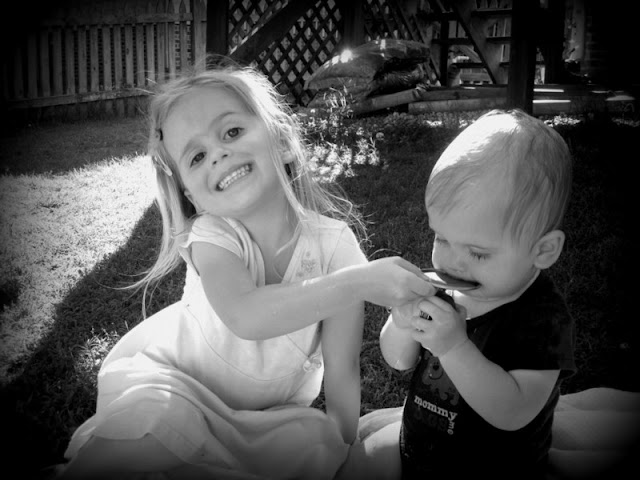 Our kids are such fun! 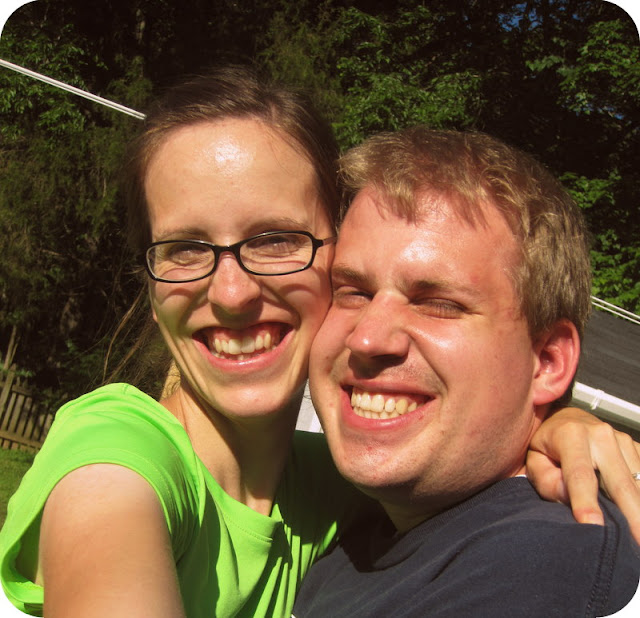