I had fun at school. I love school. School is good for you.

Rachel was kind of on one today after school. She came off the bus smiling, ditched her backpack by Benjamin (who was outside in the bouncer watching Andrew, Miriam, and me do some work in the garden) and started a game with Miriam. Andrew headed off to help a new family move in and I started taking the laundry off the line, leaving all the clothespins in a pile for the girls to pick up.

I had asked them to pick the clothespins up yesterday when I took the laundry down but they both gave excuses and ran into the house where they sat at the table while dinner got cold and I finished taking down the laundry and picking up the clothespins. I reminded the girls of that today—that I'd asked them for help and they'd told me no and later regretted it—so they said they'd do it. But then they started fighting about it. Who would hold the bag open? Who would pick up the pins? Why did they have to do it at all? Was it even fair? Why didn't I just do it myself? Why were clothespins even invented?

That one little chore totally ruined Rachel's day. (Miriam got in a bit of a snit but quickly got back out of it).

"Work, work, work!" Rachel complained when I finally let them back in the house. It took them almost forty-five minutes to clean up the clothespins because they got sweaty and decided they should fill the watering can up and then dump it on each other's heads. When I nipped that idea in the bud, they decided they needed to fold paper fans to cool themselves off. I told them they were wasting oodles of time but gave them the go ahead (and the paper (because they weren't allowed inside)). They took so long to clean up the clothespins that Miriam even had to come inside for a potty break (before being ushered back outside to finish the job).

Seriously. I mean, I sorted the clothes, washed the clothes, hung the clothes out to dry, took them off the line and folded them and my girls can't even pick up a pile of clothespins? Come on.

Anyway, Rachel was all in a tizzy over having to work. They never work at school—they just get to have fun all day long.

"That's great!" I told Rachel. "That means you should be ready to buckle down and get to work when you get home."


The next item on my list was unloading the dishwasher. I assigned Rachel the top and Miriam the bottom. They got all upset about that and switched so that Rachel was doing the bottom and Miriam was doing the top. I couldn't even tell that this was something they'd "agreed" upon because of how much arguing was going on.

I expect them to do everything around here (because I don't do anything myself and save all the work for Rachel to do when she gets home from school, see?) and that's just not fair, Rachel was telling me...as I was flipping pancakes on the griddle.

She was going on and on about how unfair her life was so I...told her to keep talking about it...in her room...by herself....while she cleaned it up.

This was most unfair. But eventually she stormed down the hall and slammed her door.

So Miriam began monologuing about how good she's being to fill the silence Rachel left in her wake.

Miriam does this a lot and it drives Rachel bonkers, especially if Miriam starts doing it while Rachel is currently misbehaving.

She could go on for ages, talking in her sing-songy voice while working very slowly (because she's spending more brainpower on talking than she is on actually working).

Anyway, Rachel went to her room and emerged much sooner than I thought she would and with a much better attitude.

"I'm sorry, Mom," she said to me on her way to the dishwasher. She finished putting away her share.

"Did you clean your room, too?" I asked, amazed at the way she was able to flip-flop her attitude.

"I didn't. I decided I should just take some time to calm down, so do you know what I did? I danced my whole dance routine that I did for Peter Pan and when I was finished I felt better so I just came out of my room."

"That's wonderful!" I told her.

Rachel has a very difficult time changing her mood. She tends to let her emotions take charge, rather than the other way around. She's definitely that little girl, who had a curl right in the middle of her forehead. When she's good she's very, very good. But when she's bad, she's horrid!

The fact that she was able to go into her room, calm down, and come out behaving reasonably was huge. Though she did her very best to contain it, her bad attitude continued to pepper our evening. She just can't let things go and although she apologized for her diatribe regarding how unfair it was of me to expect her to contribute to our household...I think she still felt like I was in the wrong.

This is mostly because of her journal entry this evening:

Never mind the fact that I made Mickey Mouse pancakes for dinner and let her use as much strawberry jam as she wanted to turn it into Minne Mouse. 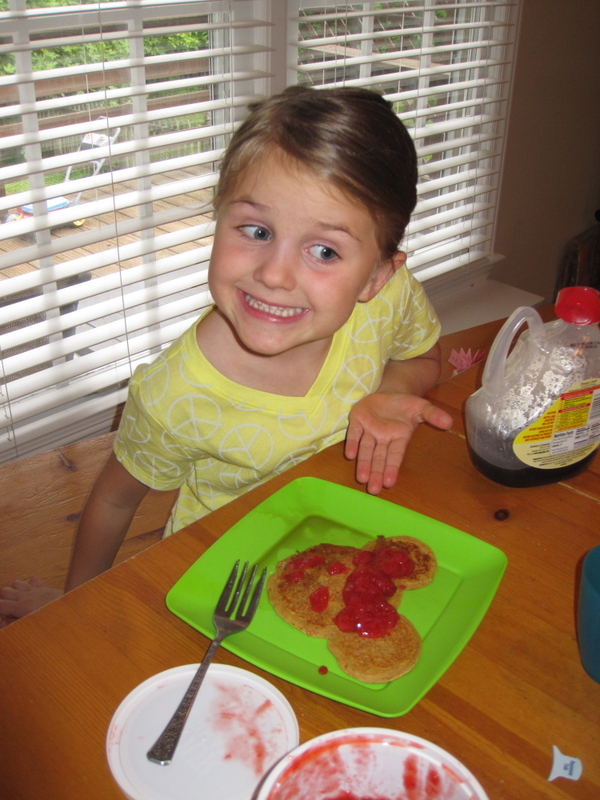 Never mind the fact that she got to feed Benjamin, a task she's been wanting to do for a while (and finally got to do it because Daddy wasn't home for dinner and I needed an extra pair of hands): 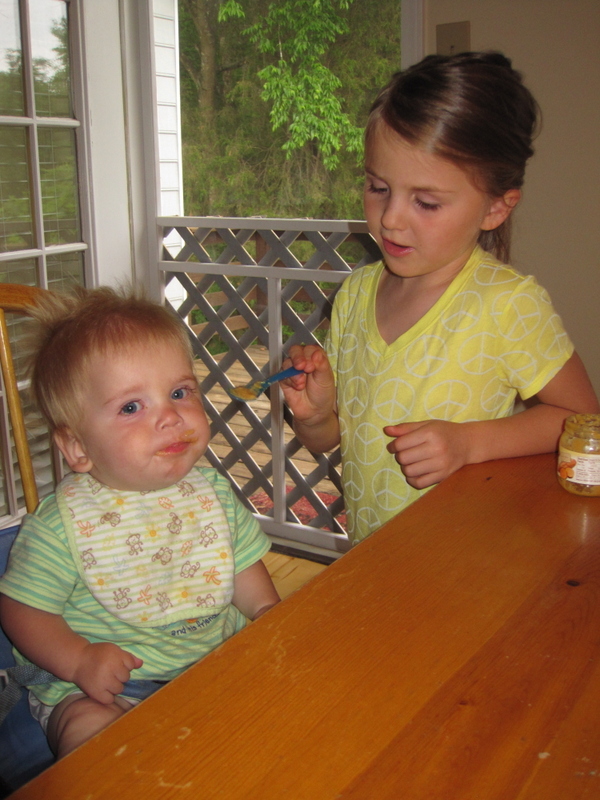 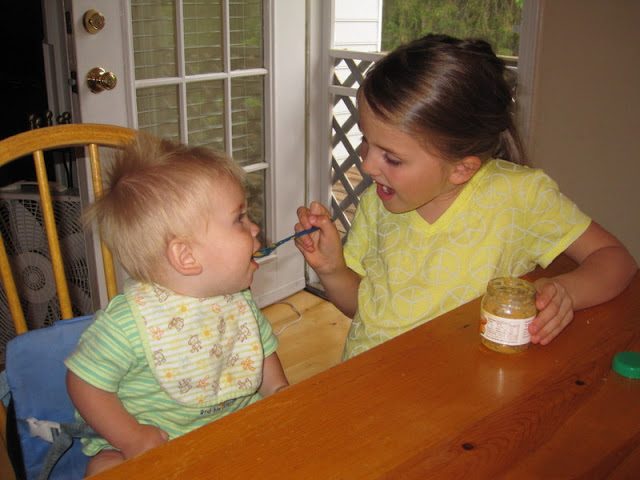 School is her sanctuary today, so she raved about it in her journal—with her neatest handwriting—and placed her journal on my desk so that I'd read it when I got home from my meeting (Andrew and I played a little tag tonight: I fed the kids dinner. Tag! You're it! Put them to bed! (It's not always like that.)).

At dinner when we were going around the table saying our favourite part of the day, Rachel's was "Everything at school and nothing at home."

Miriam's, oddly enough, was "cleaning up the clothespins," though in all fairness she took that back after her turn was over to say that her favourite part was actually eating Mickey Mouse pancakes (her favourite part of the day is usually whatever we happen to be doing when we ask what our favourite part was; Andrew calls this availability bias).

I suppose, in all fairness, that Rachel also included this little paragraph in her journal: I made fans. I made them out of papar because I wanted to be cool.

All the cool kids are making fans out of paper these days. She made fans for everybody (so we could all be cool). She helped Miriam make a fan. She made Benjamin a fan. She made Andrew a fan. She even made me a fan. That's how I know she wasn't actually all that upset with me after all.

Some days are just tougher than others. I suppose the tough days/moments only serve to make the good days/moments seem better.

(Rachel's actually matured quite a bit this year and has gotten noticeably better at tempering her strong temper, and obviously she spent some time being helpful and kind while she was home today (see photographic evidence above), but some days...I tell you...she's a handful!)
Posted by Nancy at 12:32 AM