T minus one week until my sweet baby boy will celebrate his first birthday.

He has a cold right now (again) so his face is a constantly dripping waterfall of snot/drool and we're getting our best block of sleep after we should be awake for the day. It's been a rough couple of days.

But Andrew's almost over his cold and I think Rachel might be getting over it as well (Miriam and I have so far artfully avoided being contaminated with germs (knock on wood)) so chances are Benjamin will be on the mend soon. And then maybe we'll sleep again.

Oddly enough, Benjamin's odd sleep-cycle hasn't put a damper on his ability to make mischief as it has on my ability to curb it. While I'm walking around like a zombie (in spite of the extra help Andrew's been (working from home so that Benjamin and I can sleep until noon after staying awake until sunrise)) Benjamin's toddling around getting into stuff.

Getting into stuff is Benjamin's new favourite pastime. That's how I know his first birthday is coming up.

While I was busy making dinner, Benjamin decided he was ready for a snack: 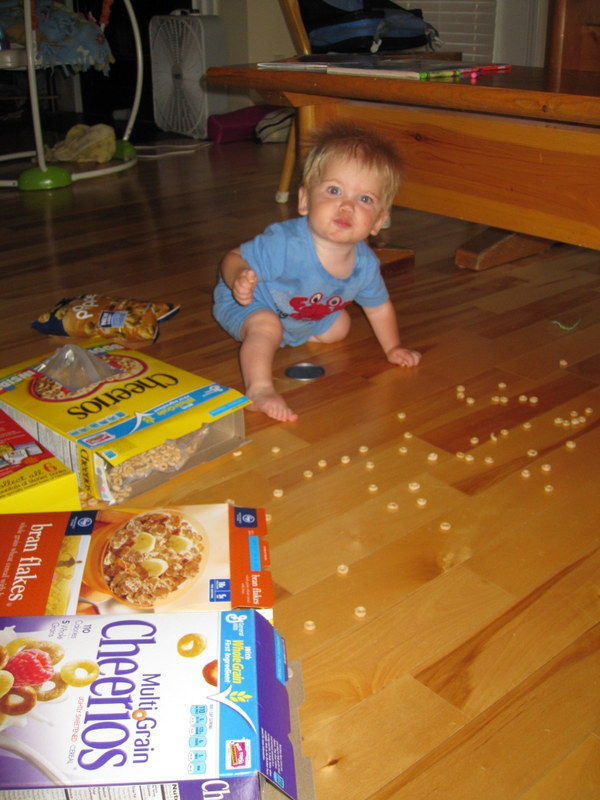 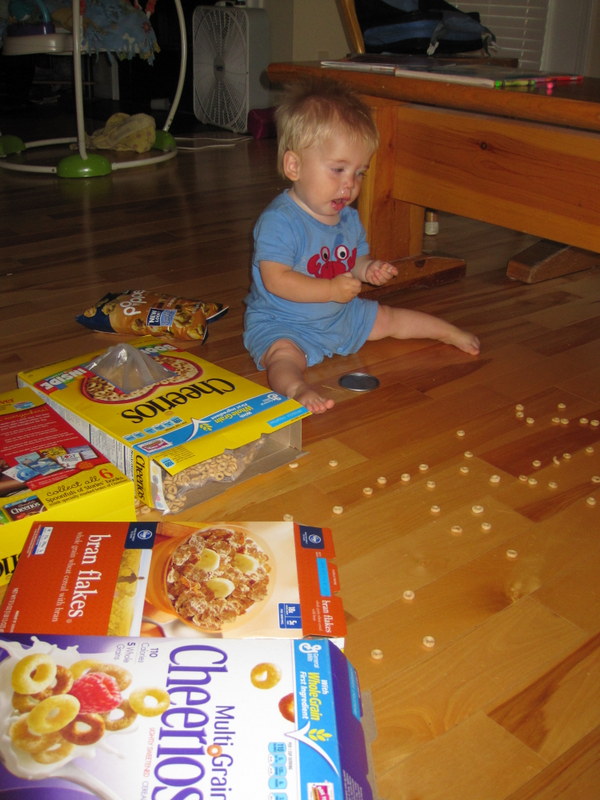 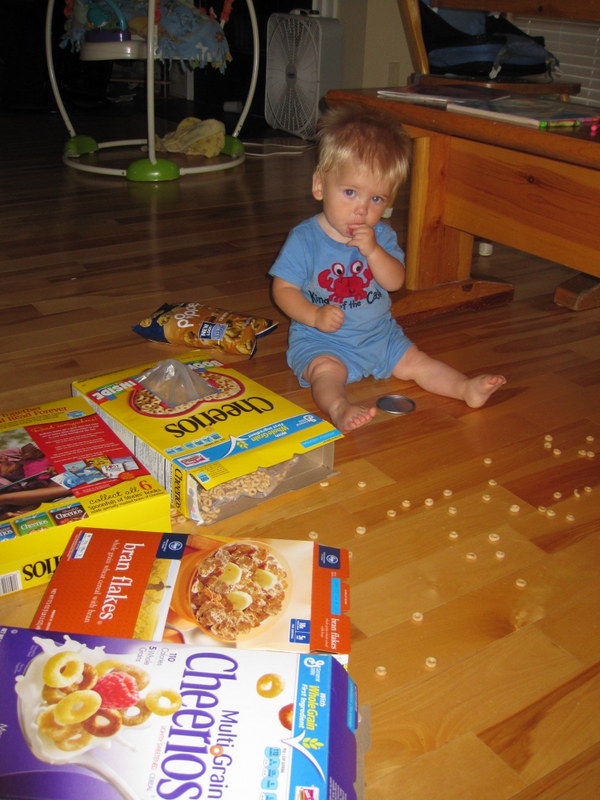 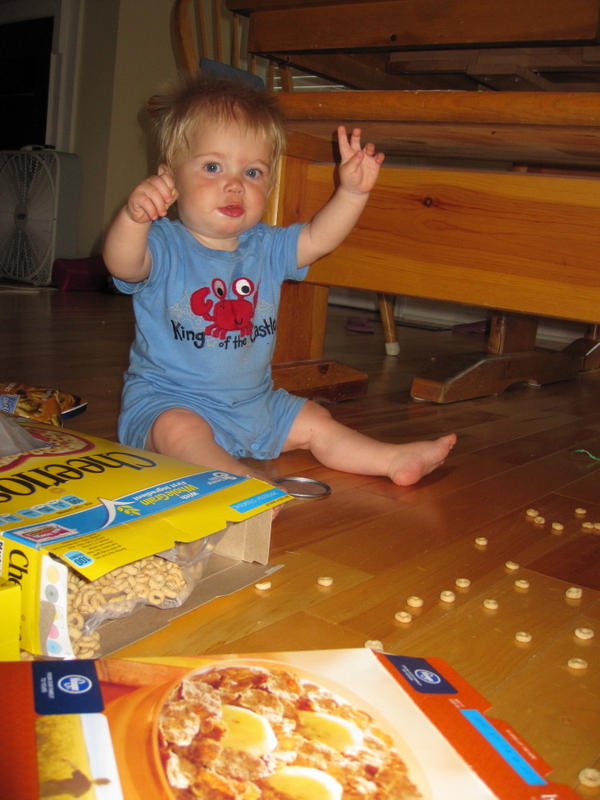 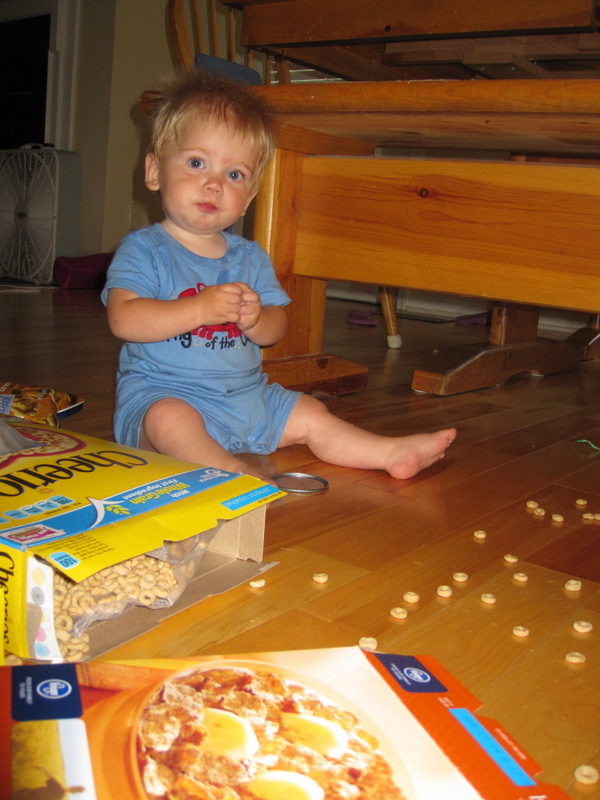 Between him and Miriam, the floor was cleaned up by the time I was ready to put dinner on the table.

Benjamin has also recently discovered the joy of kitchen cupboards—treasure troves of fun! He likes to throw open the doors and empty everything he can onto the floor. Here he is banging two pie tins together while hollering at the top of his lungs: 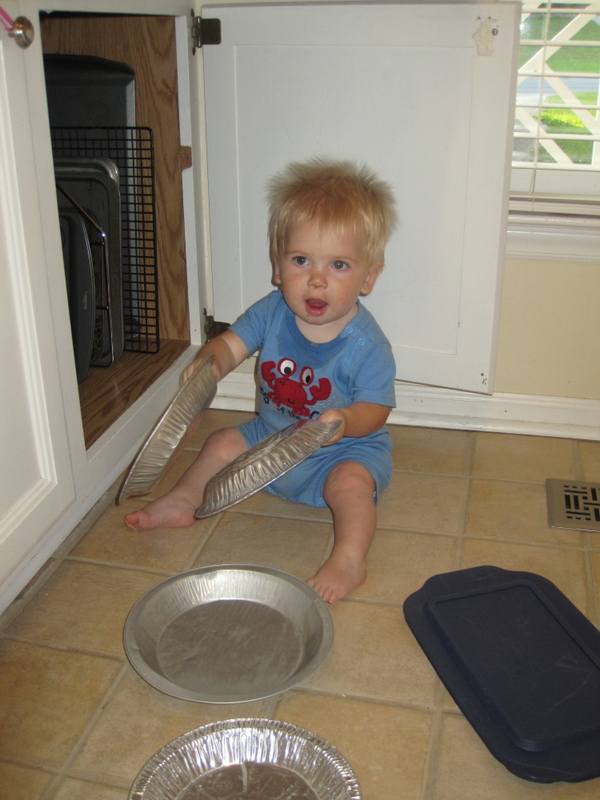 In the top left corner you can see the hint of a hairband hanging on the doorknob. It's there because I "locked" the cabinets under the sink with a rubber band. Miriam thought this was an ingenious idea and  so duplicated the process on every knob in the kitchen. She didn't really understand the idea behind having rubber bands on the knobs; she just thought it was pretty. So now we have hair elastics adorning all the knobs in our kitchen. The headbands are the worst because she'll stretch them across as many knobs as she can, creating a boobytrap effect.

Anyway, her "locks" are just for looks so they aren't very effective at keeping this little guy out of trouble. Not that he would have any trouble getting out of trouble were he in trouble. Just look at him! 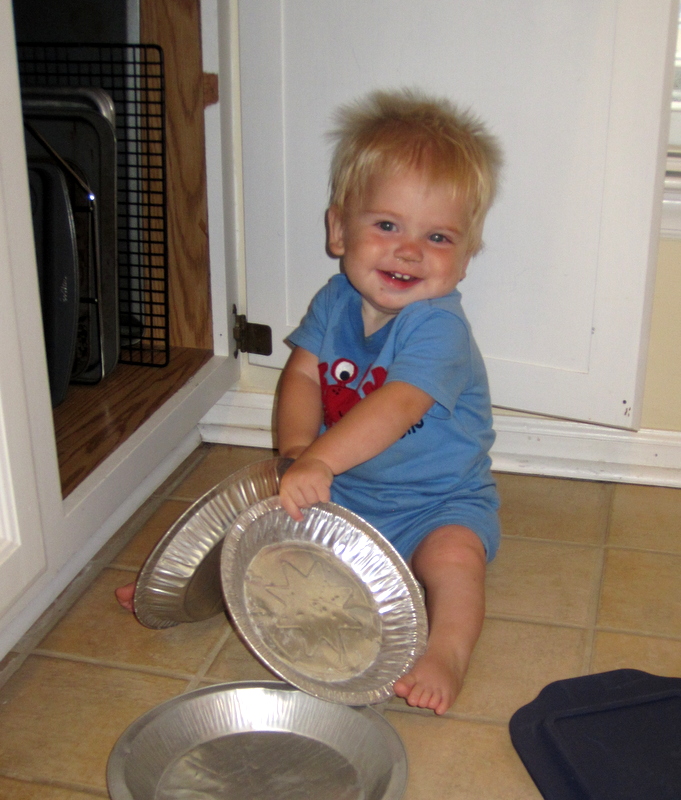 Even with his snotty face he's a beautiful baby! 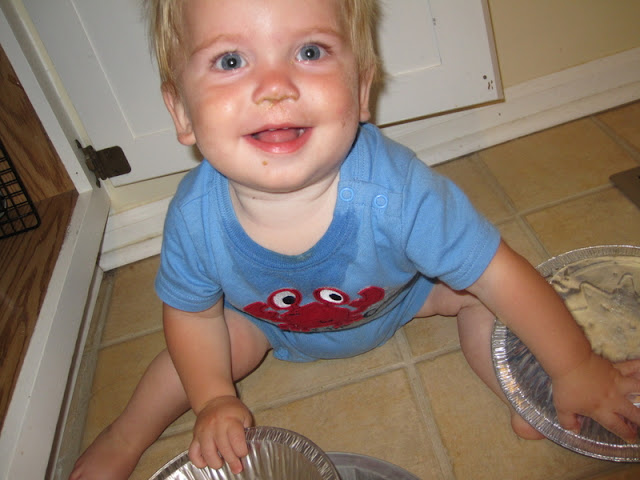 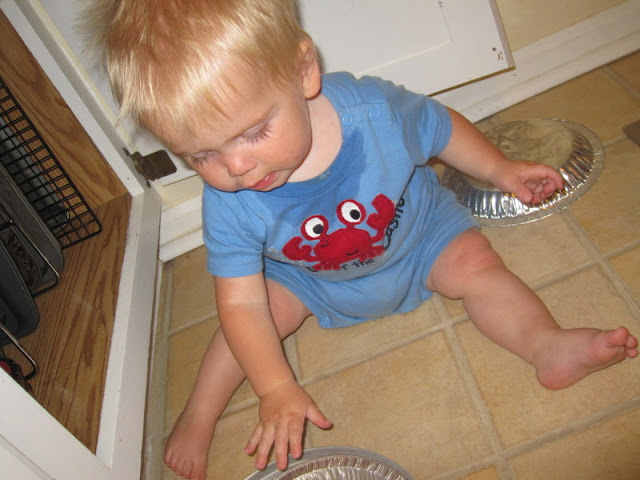 And here he is, snuggling with Daddy right before bed: 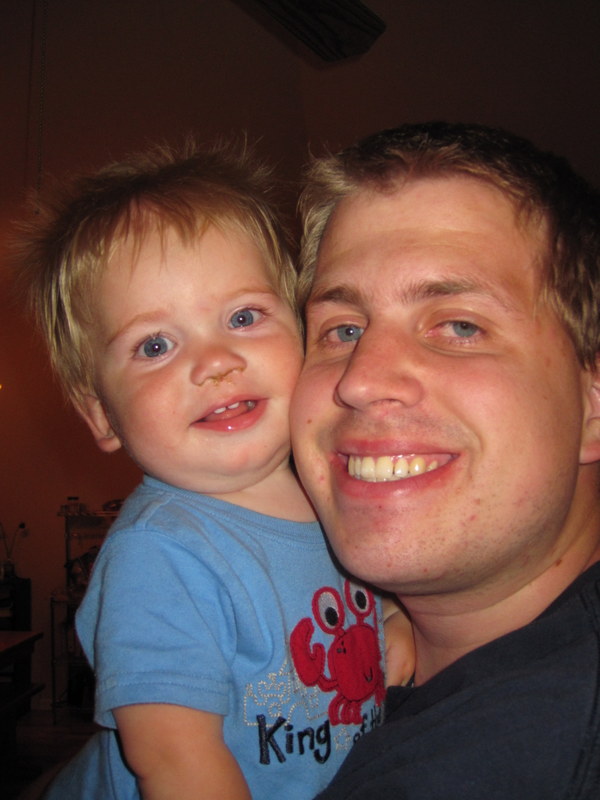 Once upon a time I went to Germany for a Viola Congress with my mom. As I was greeting people coming to her presentation a sweet German woman pumped my hand up and down and said enthusiastically (in a thick German accent), "So, you are your mother's daughter!"

And I answered, equally enthusiastically, "Yes, I am!"

I think the same thing could be said about Benjamin and his father. He is his father's son. Carbon copy. 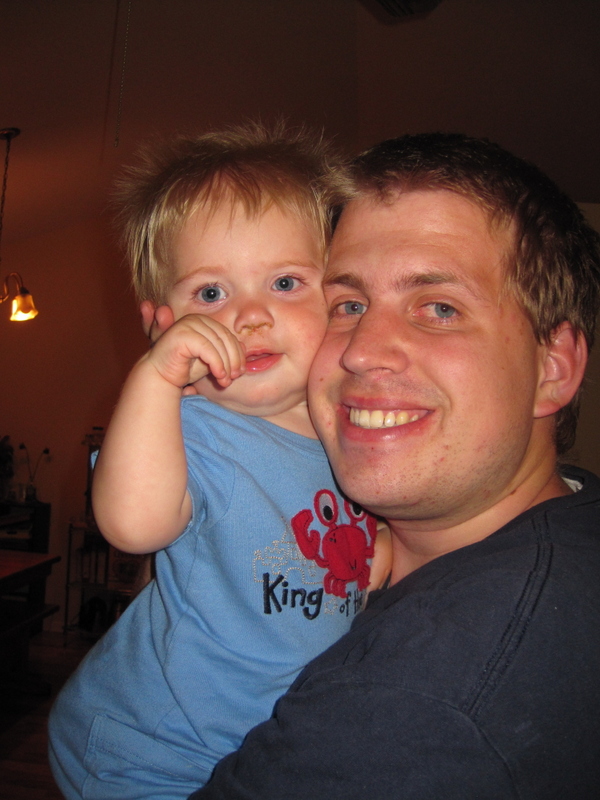 When he's (deemed himself) ready for bed (his timetable, not mine) Benjamin will start waving good night to everything. You know that book by Margaret Wise Brown, Good Night, Moon, (who doesn't?). It's like that, only a lot more boring and less poetic.

This is going to sound rather strange considering I started this post by complaining about how little Benjamin's been sleeping. And that part is true. But it doesn't make the following statement any less true: I think we've made a breakthrough in sleeping.

Benjamin seems to be understanding bedtime and will lie down to go to sleep on his own. He won't even really cry; he'll just fuss for a while and then quiet down and go to sleep.

It's kind of weird. But kind of nice.

I think it might just be because he's sick and wants to sleep, so he'll go to sleep (but then he'll wake up coughing and crying and will be inconsolable for hours on end, which is...awesome (just kidding; it's not)).

Although I'm anxious for Benjamin to stop screaming all night long, I really hope the whole "going down" thing doesn't stop after Benjamin's cold gets better.

I'm tired, and while I think my baby is ridiculously adorable, I think I'd probably enjoy him a lot more if I wasn't quite as tired as I am.
Posted by Nancy at 11:44 PM