Our house doesn't have a pantry so our food kind of just sits around here and there. At first we tried to devote a cupboard or two to food but it just wasn't sufficient to hold enough food for a family of five. Especially a Mormon family that feels the need to always have five jars of peanut butter on hand.

This was fine until Benjamin realized the world was his to explore.

Now soup cans double as really heavy blocks and our bin of flour is a puzzle that Benjamin is constantly trying to figure out how to crack (I will live to rue the day, I'm sure) and cereal and crackers are whispering to Benjamin that it's snack time all the time.

I make my own, that's true. And that stuff goes up on an unreachable shelf because it's all in glass jars, which make less handy blocks than soup cans. But we also buy it from the store because my kids love applesauce and go through it fast and I don't have enough jars to keep them satisfied. The store applesauce comes in a plastic jar and is stored within reach of Benjamin's ever-searching fingers and he pulls it out several times a day.

I usually let him play with the jars because compared to other things he gets into, plastic jars of applesauce is nothing.

Well, the other day he'd gotten out the applesauce again. He even got out a bowl and a spoon and sat at the table. "Appy-sauce?" he asked.

"Not right now," I said. "We just finished breakfast. I need to do a few things before I get you a snack."

A few minutes later I noticed he was actually eating—because he started choking.

"Benjamin!" I exclaimed, rushing over. "What are you eating?!"

"Appy-sauce," he explained hoarsely before he started chewing again.

My two-year-old was attempting a sugar-downed version of the cinnamon challenge!*

My question about how he got the cinnamon and sugar down was answered by the presence of the bathroom stool by the kitchen counter. Blast that stupid, stupid stool! He's always dragging it around and getting into mischief and it feels like either Andrew or I are constantly putting it up high in "time out," but somehow it always ends up back in circulation.

At least I was able to stop him this time before he'd done too much damage! 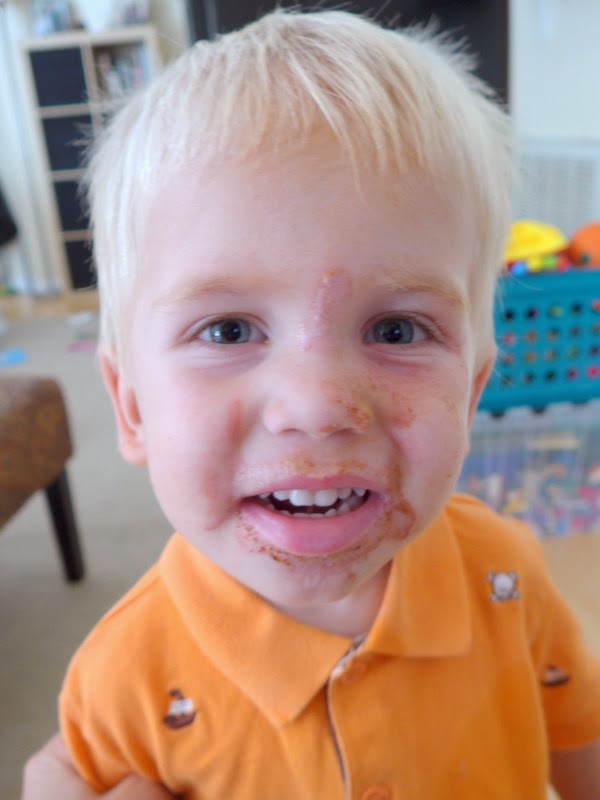 And sometimes, just because half of what I read are nursery rhymes, I find myself replacing my life story into the pages of Mother Goose. We recently (because February is definitely recent) acquired Richard Scarry's Best Mother Goose Ever and inside was a nursery rhyme that I had never heard before—probably because it's a little inappropriate (I'm sure Josie as well as our dear friend Dan, Dan, the Welshman will agree!) but it's unfortunately also incredibly catchy and my children think it's hilarious. It's Taffy was a Welshman, in case you were wondering; here's my verse about Benjamin:

Benji was a toddler, Benji was a burglar;
Benji blitzed the pantry, stole the cinnamon and sugar.
I scowled at Benji's mess, he began to weep.
I handed him the broom and said, "Better start to sweep!"