Busy or not busy, that is the question

A few days ago I started a post like this: "Phew! Trading Tables is over! I seem to only be able to manage one..."

But I never finished it because then I got "busy" again.

Phew! I finally finished my brother's wedding invitation and then it was decided that they'd hold a second reception in Utah County so I had to fiddle around with it again. I seem to only be able to manage one project at a time these days.

It's not even that I'm incredibly busy because I don't think I am. But if you went through every blog post from the past couple of months that uses the word "busy" and replaced it with "exhausted and pregnant" I think that would come pretty close to the actual truth.

I'm pregnant. And anemic. And that is a fabulous combination (just kidding).

So, as you recall, I wrote a post lamenting not being pregnant again in September. The truth was that I had every reason to believe I was not pregnant. And by "every reason" I mean "a whole lot of blood," which is usually a pretty good sign of not being pregnant. So I legitimately thought that I wasn't pregnant; it was a pleasant surprise to find out that I, in fact, was pregnant. It was even more happy when we saw the heartbeat on the ultrasound because bleeding in early pregnancy raises risk of miscarriage up to about 50% but if you see a heartbeat via ultrasound early on your pregnancy is considered "viable" and your risk of miscarriage drops to about 5%. I like those odds a lot better.

I'm a heavy bleeder when I'm not pregnant and I've been anemic through two pregnancies so far so it was no shock to have my doctor tell me that I was already anemic with this pregnancy (I was not anemic with Benjamin and when I got the results I was shocked; "Are you sure?" I asked the doctor incredulously).

I've been trying to plan our meals around iron-rich foods and I'm actually starting to feel a bit better now that I'm nearing the second trimester.

Anyway, Trading Tables was a nice thing to check off my list. My kids are always very excited about going "shopping." The night before Trading Tables we were having dinner and Miriam said, "So, have we decided if I'm going to attend Trading Tables?" When I told her that we didn't exactly have any other option she squealed with excitement.

She found a mermaid Barbie doll, which she was thrilled about, and a pair of boots that she loves.

Benjamin was in heaven. I think he found every car in the place. He kept bringing me things and saying, "Me 'ike 'is car. Me 'ike 'is."

That boy found so many things. The game Junkyard Jalopy (like the game Operation but with a car instead of a person), a big dump truck, a board book about school buses, things of that nature. He liked a lot of things.

Rachel missed out—she went to a play date at a friend's house (where she had an awesome time and got to roast marshmallows outside and everything so I'm not really sure she "missed out").

Andrew found a stool and a pedal for our keyboard. He was pretty excited about that!

We ended up with far more left over than we ever thought imaginable (of course). With the help of some friends and the sister missionaries we were able to pack everything up into the back of two minivans to drop off at Durham Rescue Mission. So now that's over for another six months or so!

And I finished the invitations! Finally! I think I did at least seven drafts in four different sizes. And things just kept changing—the wedding date, the number of receptions, the pictures...everything. But it's more or less set in stone now. I think Shalise is off to the printer as I write. 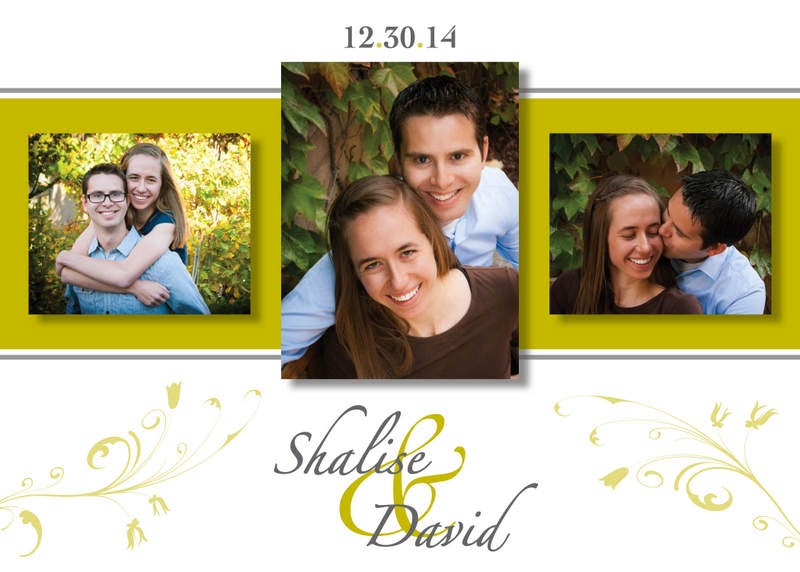 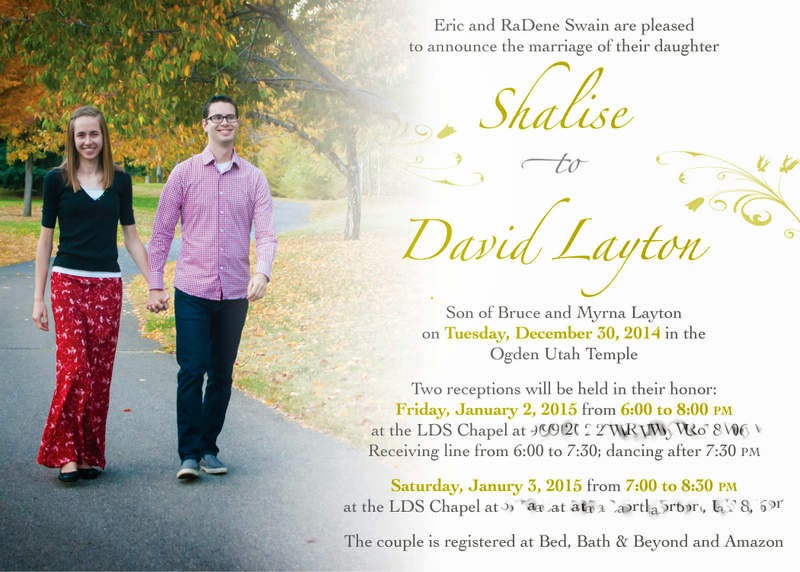 Before sending them my final copy I asked that they make sure that I didn't make any silly typos. I'm the queen of silly typos (like the one time I put the wrong year on the invitations for a primary activity this summer—the kids were all like, "Oooh! We're going to time travel?"—or the time I neglected to put the time on my sister-in-law's bridal shower invitations, or the time...) but they assured me that there were none on these.

David said he made extra sure that everything was fine because he once was invited to a reception for one of his friends where an extra 0 was left off the address. He ended up parking nine blocks from where he should have been and then also managed to lock the keys in the car. It was a hilarious evening.

Just last night I was telling Andrew how productive I'd been during the day yesterday.

"I taught preschool and vacuumed and put a load of laundry in and made dinner and did the dishes," I said.

"And you finished David's invitation," Andrew pointed out (because at that point we'd thought that I had), "And you folded the load of laundry you started. You really are functioning on a higher level these days."

"No, no," I admitted. "I folded yesterday's load of laundry. Today's is still in the dryer. BUT it is in the dryer, so there's that."

I'm ready for my next project which is either Rachel's class "winter celebration" (which I'm going to miss but still have to plan) or Thanksgiving dinner (which might be pretty pathetic if I'm left to be in charge of it—I did, however, make some pie crusts today). Oh, I have to plan Miriam's preschool Thanksgiving party, too. Rats. I forgot about that...
Posted by Nancy at 6:43 PM