This morning Benjamin and Miriam were the first two up. They closed our bedroom door and put on Wild Kratts (I was just informed that it was Miriam and Rachel who woke up first; Benjamin joined them only after they turned on the show; and apparently it was still dark when Rachel woke up—the sun rose at 6:46 AM). I was 100% okay with that but eventually we had to get up anyway. We had many party preparations on our docket. We had to clean the house and bake cupcakes and finish getting all our games ready.

Here's Miriam dressed up as Rapunzel, playing in her balloon-filled castle. Andrew helped me make it last night after we put the kids to bed. At first he felt daunted by the task until I showed him what I had in mind (this, not this). 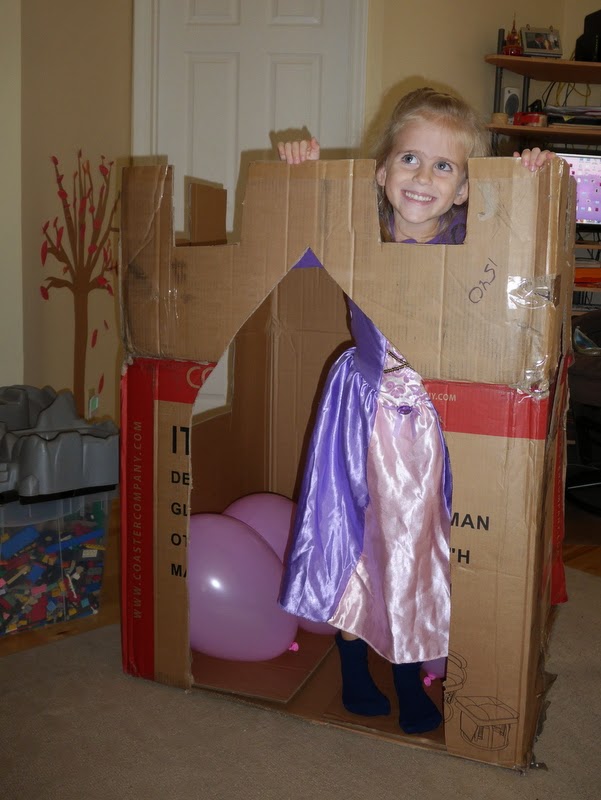 He was all, "This is going to take all night? How are we ever going to turn this box into a castle?"

And I was like, "Dude—a door, some windows, a few cuts at the top. Boom. Finished."

He was dreaming a lot bigger than I was. It's not the most beautiful castle in the land, but the children were thrilled with it. Benjamin spent most of the morning playing in the "cassie" which helped us get our chores done. Miriam obviously enjoyed it quite a bit, too. 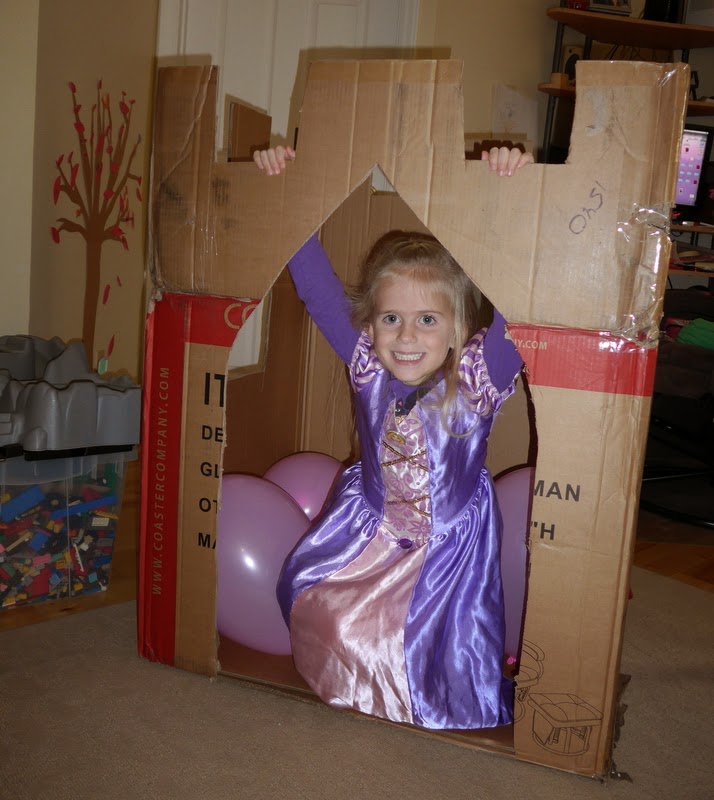 We filled it with some balloons that I've had for ages. I think we got them in Utah for someone's birthday...but I can't remember whose or when. I've had them for years though and it was time to get rid of them.

Soon our party guests arrived. Our "gathering activity" was making crowns out of toilet paper rolls. The kids worked on them while people straggled in. 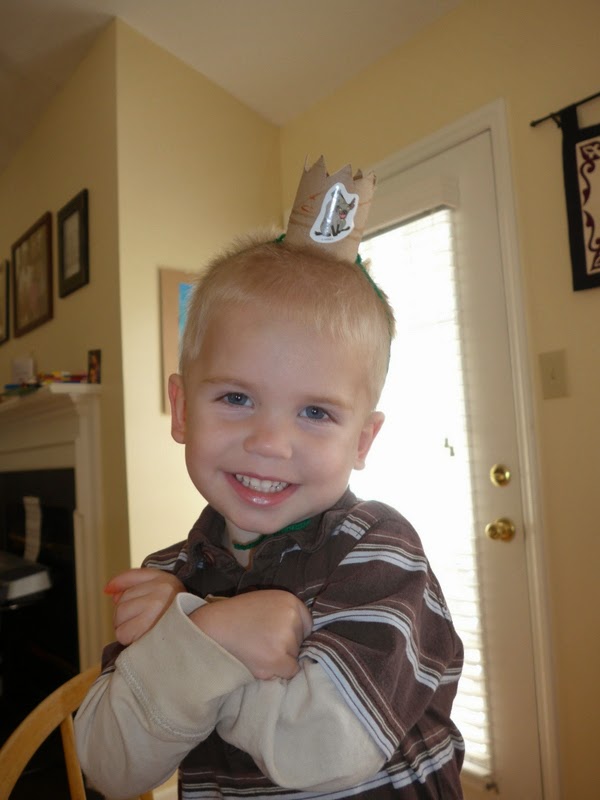 Here's Miriam standing on the heater, letting her dress poof out. We woke up this morning and the house was 62°F, which seemed a little cold for a princess party (and we're wimps) so the heater went on. 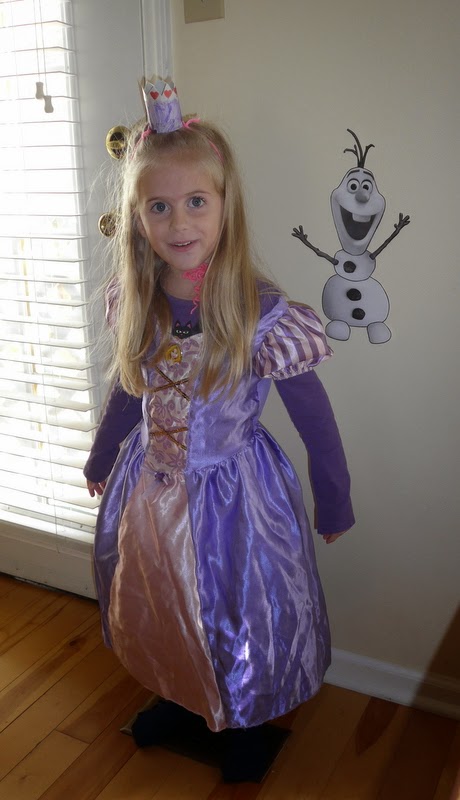 After making crowns the children went feral and had a balloon war. Apparently I didn't need to plan any other activities because they probably could have continued the balloon war all afternoon. 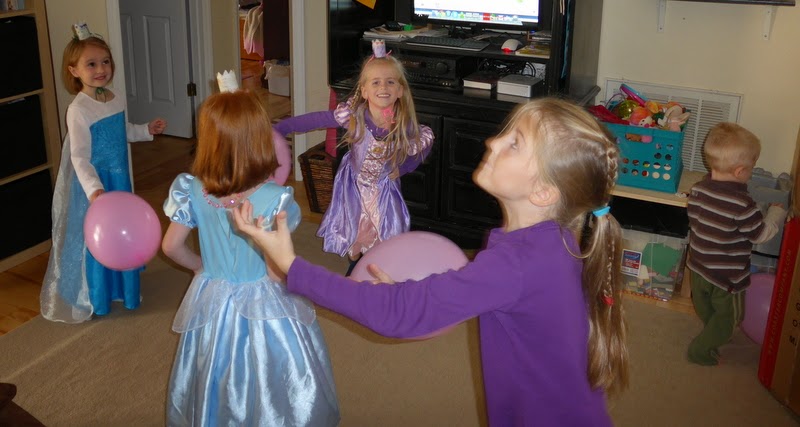 As you can see we had an Elsa and Cinderella show up to our party. They were our only guests for the first half until four more friends showed up for the last half of the party (which wasn't a problem because we knew they'd only be able to make it to half of the party beforehand). 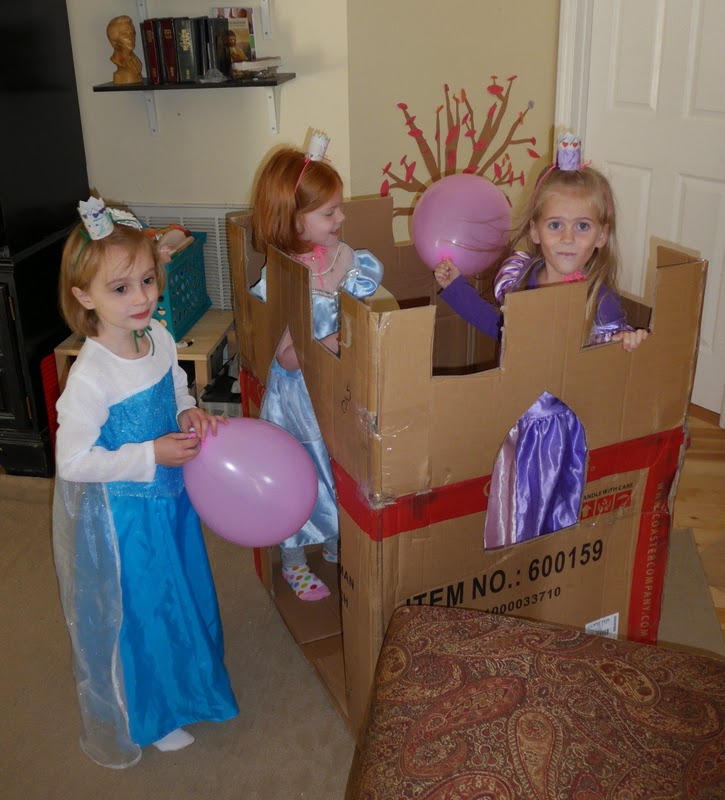 Once balloons started popping we gathered to play some games. Our first game, by default, was pin the carrot nose on Olaf. 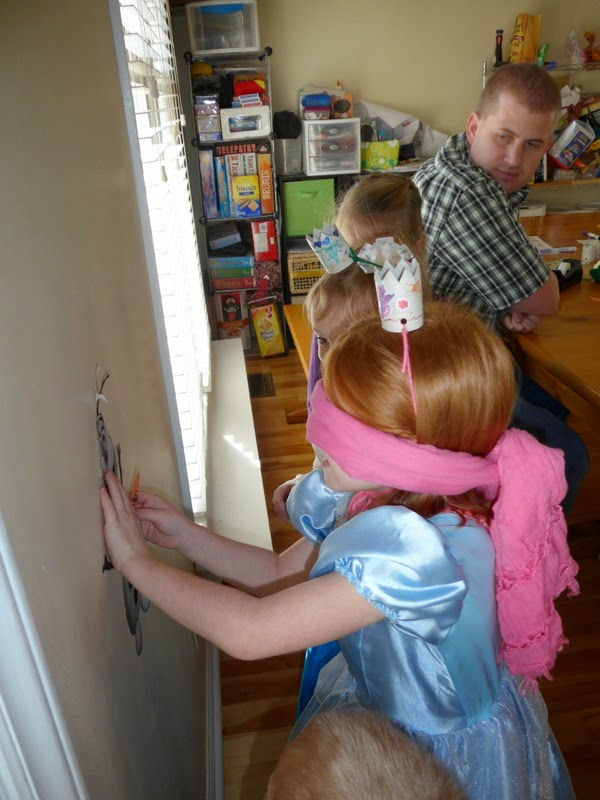 I have a hunch that Miriam peeked somehow (though she adamantly denies this). 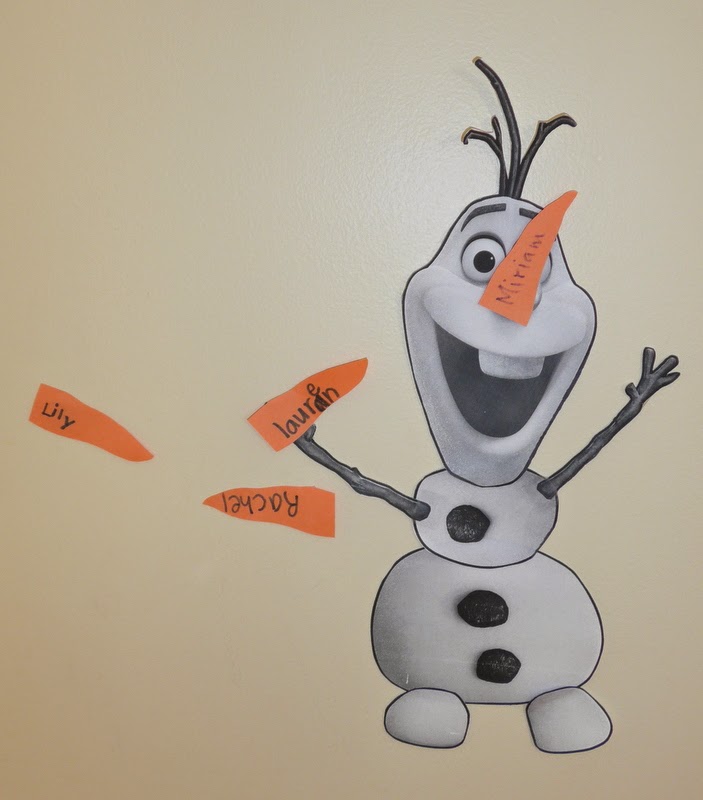 Miriam couldn't decide on what kind of a princess party she wanted to do so we did all of them—or at least a lot of them. We don't have any Frozen figurines but we do have nearly every other Disney story, thanks to Uncle Jacob and Aunt Shayla's Disney themed wedding lunch (Grandma's been gifting them to the kids over the past couple of years). We picked out a princess figurine for each game and put them into a bag and let the kids take turns pulling out a princess to see what activity we'd do.

The first princess we pulled out was Snow White. We played "Pass the Poison Apple," which is quite similar to the game "Hot Potato" (in case you wanted to know how to play). We played several rounds of this game.

Here's Rachel and "Elsa" finishing out one of our rounds: 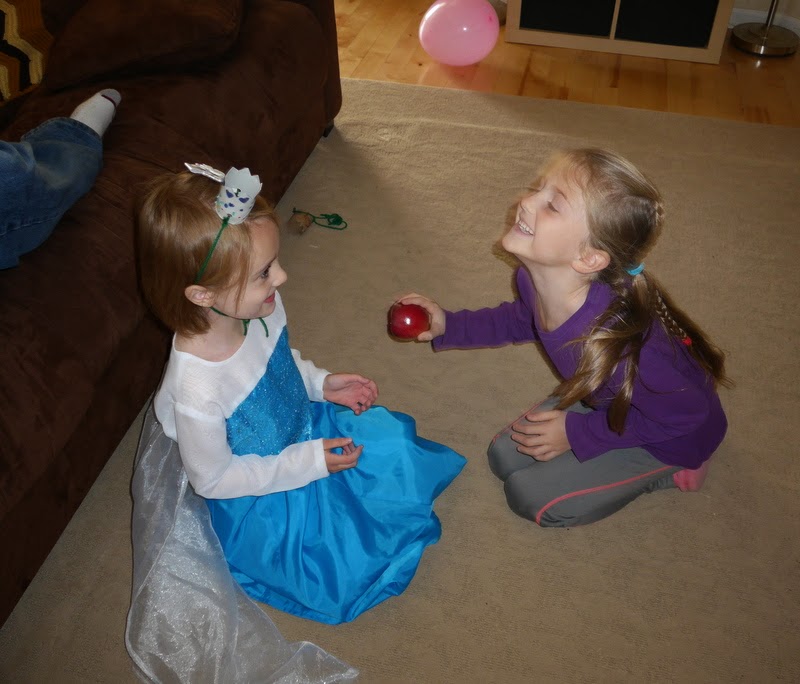 Our next princess was Ariel, I believe. For that we got out a big blue sheet, put all our sea-themed stuffed animals on top (we found a mermaid, a couple of sea turtles (including Squirt) and an octopus—who knew we had so many sea creatures?) and then used the sheet like a parachute and bounced it until all the stuffed animals went flying off. We also played several rounds of this game. The kids loved it!

Next up was Rapunzel. We made a simple piñata from a cereal box, filled it with left-over Halloween goodies, and printed out the wanted poster for Flynn Rider as a finishing touch. I couldn't find any rope (though I know we have some somewhere) so I crocheted my own. That was probably the most time consuming part of this party.

The kids attacked it—quite fittingly—with a frying pan and it was so sturdy that they each got several turns before it finally burst. It was a good thing we had a few bigger girls to help out (Rachel and B.) because I think they did most of the damage. 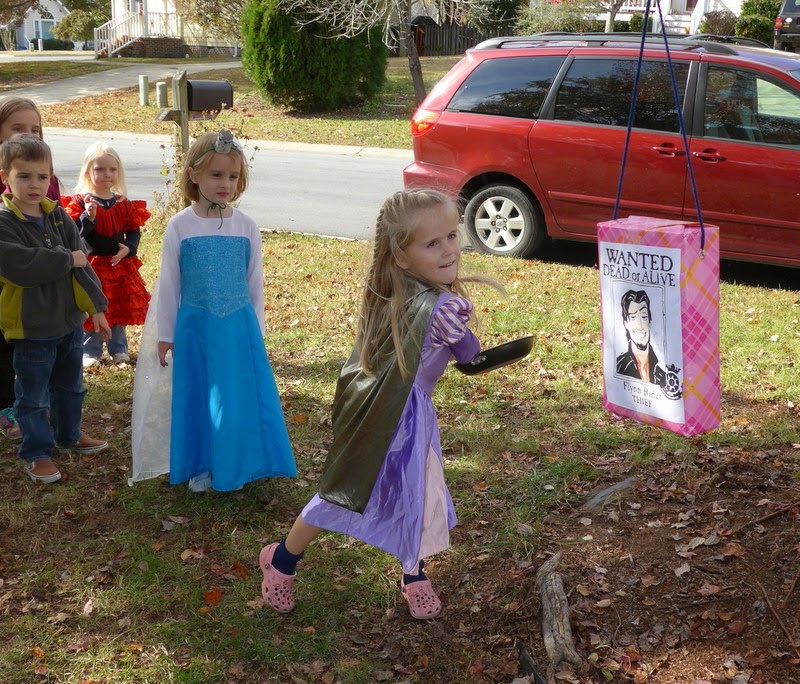 (I think Marian is sneezing in this next picture—sorry Marian). 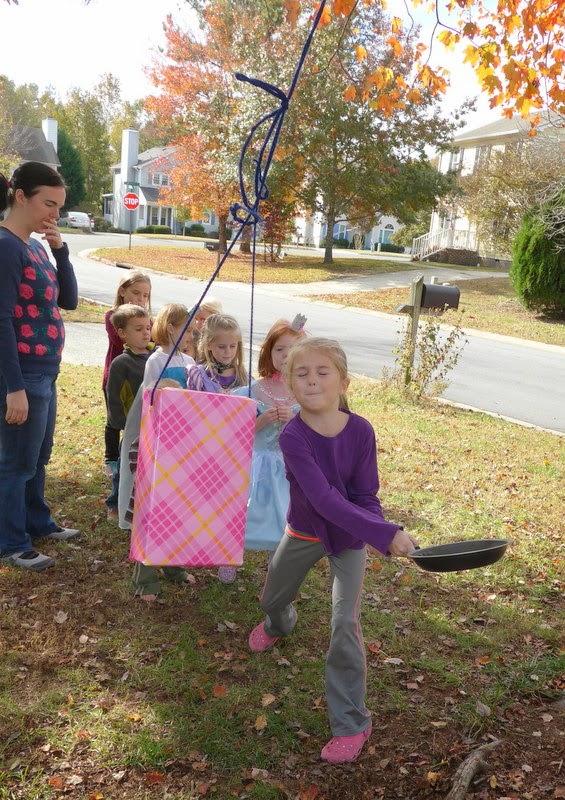 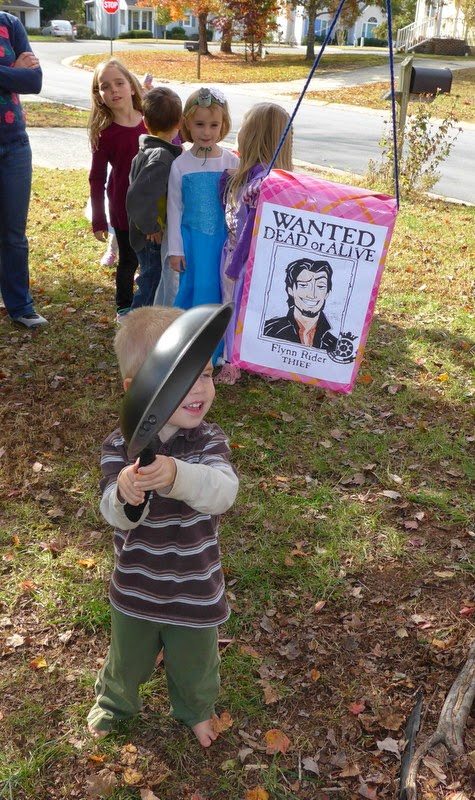 The kids had fun hunting for candy in the grass. Then we went in to eat our treats and to make crowns for the second half of our guests (who were legitimately jealous of the other kids who were wearing half a toilet paper tube on their heads). After everyone had a crown and their fill of candy, we continued with our games.

We played "Musical Cushions" for Jasmine. I was going to make magic carpets out of cardboard but decided it would be easier to use pillows (we don't have enough chairs to play actual "Musical Chairs" at our house), so that's what we did. The kids weren't really into this game, but I think they had fun, anyway. Benjamin was surprisingly good at this game—he kept grabbing the very last cushion available. I think everyone who got out lost because Benjamin beat them to the last cushion.

Lastly we played "Duck, Duck, Goose" with Cinderella's slipper. Miriam has a pair of sparkly blue Cinderella slippers (that we got in a bag of hand-me-downs from the Templemans when we lived in Utah) that whoever was "it" would carry around the circle. Some of the kids would say the words, "Step-sister, Step-sister, Cinderella!" but most of them just dropped the shoe into the lap of the next Cinderella before starting a hyper chasing game around the house.

Technically I suppose they were supposed to just run around the circle, but we have this loop around our kitchen that is just too tempting for any child to ignore for long. My kids are always running laps around it. It's irresistible.

After we were finished with games we moved on to cupcakes. I told my kids that I can't do a fancy cake and plan a party, so it's one or the other. Both years we've had parties (Rachel's 5th and Miriam's 5th) Grandma has ended up making a special cake, but Grandma wasn't here for the party so I had to make cupcakes. I kept them super simple, iced them right before handing them to the kids, and let the kids decorate them with sprinkles before eating them. It was a hit. We also had some apple slices.

We finished up the afternoon drawing with sidewalk chalk and climbing trees in the front yard. I had a few more games planned but the kids seemed to want to just run around and play by this point, and I was totally fine with that. They played until their parents came to pick them up.

Miriam wouldn't come outside, though. She lay down on the couch and sucked her thumb and sulked. I thought she was just being a party pooper but now she's running a fever so apparently she was starting to feel sick—which was quite surprising because she was so excited about and involved in her party! She didn't seem sick at all the entire day until she just...crashed. 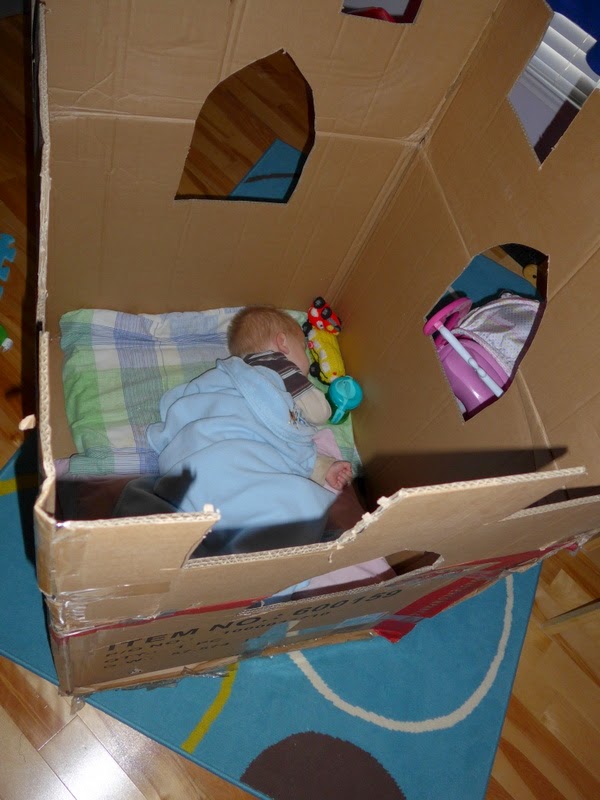 He fell asleep fairly quickly. I think we all did. What can I say? We're a family of introverts.

The party was fun but we clearly needed some recuperation time.

(After a nap and some medicine, Miriam is feeling much more chipper she's "even eating some real food, which is pizza" and tells me that although feeling sick was no fun that at least she "had friends to laugh and giggle with throughout the day.")
Posted by Nancy at 7:27 PM