This evening at Relief Society some friends were RSVPing for Miriam's birthday party, which is this Saturday. I sent out this invitations this morning. We're going for low-key fun this year. I figure that since we ask friends to not bring presents they don't need a lot of notice about the party—they just come, play, eat a cupcake, and go home. Easy, peasy.

Mickie was the first to RSVP—a no. They're going out of town this weekend—spur of the moment birthday party for her niece—but if they had been around they would have totally been in.

"Wasn't her birthday a while ago?" Heidi asked (she didn't get the email but I think her daughter will be coming now that she knows about it).

"Well, yeah," I admitted. "But it's right before Halloween and that was busy and then all of a sudden it's November and everything's crazy. There are too many holidays this time of year. I'm falling behind already!"

"Speaking of Halloween," Mickie said. "Miriam's costume was darling. She was so beautiful in that dress!"

"Oh, that was all my mom," I said. "When Miriam said she wanted to be Mary Poppins I was fine with the idea until she said she wanted to be the white and red Mary Poppins and then I was like, 'Oh, no!' But my mom found that dress at Savers and mailed it to us—she was so excited for Miriam. She said she just must miss having little girls around to spoil. Most of my nieces and nephews are in high school already...and then there's my kids."

"But David just got engaged!" Mickie squealed. "I'm so excited for him!"

And then Mickie and I both squealed and talked about how excited we were (Mickie and her husband both served in David's mission so they're tight) because we're seriously really, really happy about this.

Anyway, the point is that I'm about a week behind and still need to post about Halloween. So, without further ado, I give you the Day Before Halloween...

Miriam had her Halloween party at preschool. Benjamin and I went for the last half hour or so. They had a costume parade and then recited some poems and songs they'd learned. 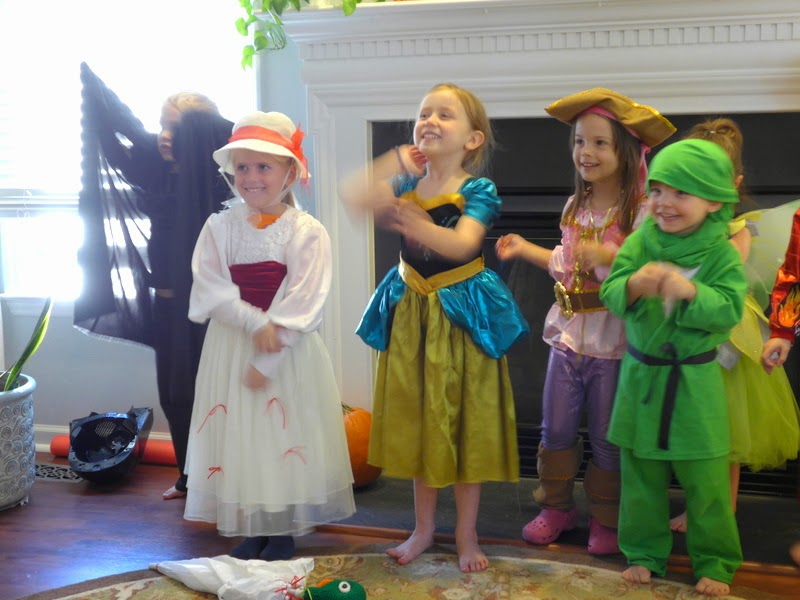 After school we got the pumpkins ready to carve. I had to give the girls latex gloves to scoop the goop because they didn't like touching it, but they did a pretty good job. Benjamin also wanted gloves but his hands are so small that the gloves wouldn't stay on. Now I need more gloves for my first aid kit. 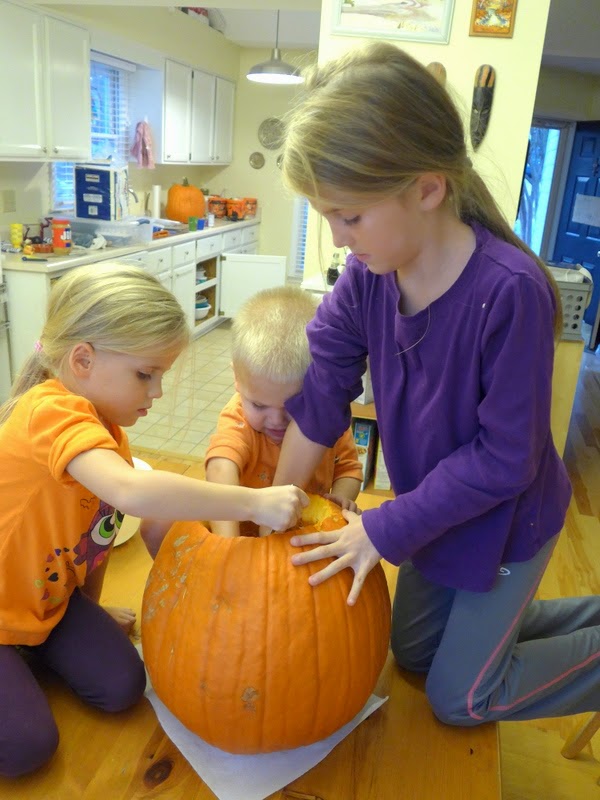 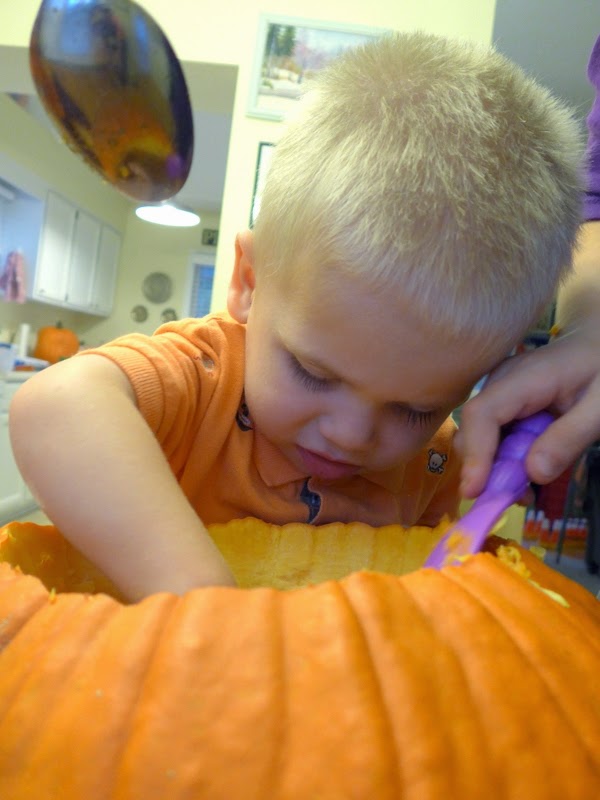 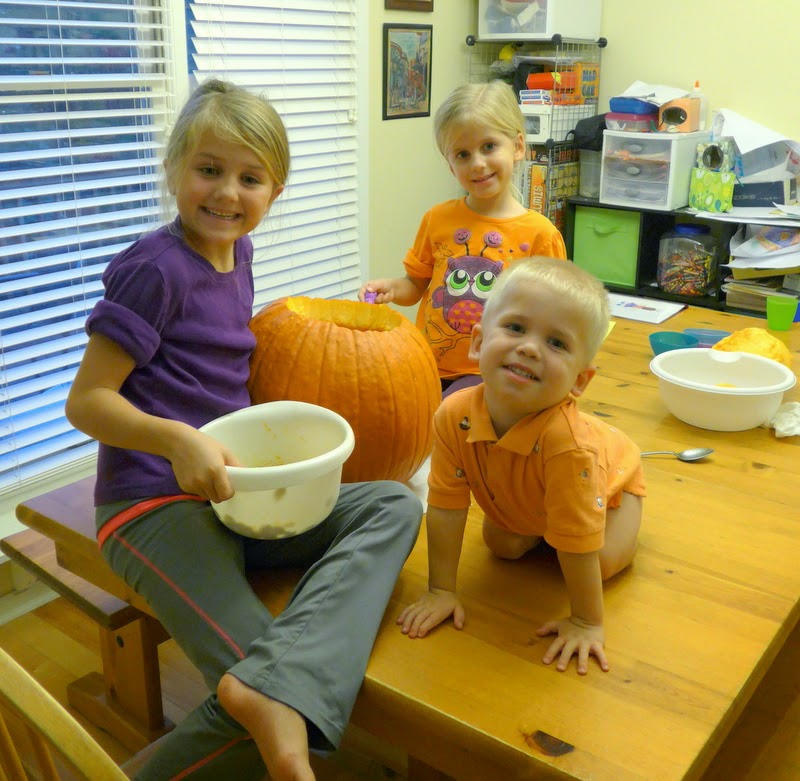 On Halloween night I made chili and deviled eggs for dinner. My mom gave me the idea to put olives on the deviled eggs to make them look like spiders. The kids loved it (even though I didn't do all the eggs—cutting the legs out was too time consuming).

I'm a little surprised with how excited my mom was about Halloween this year. I don't remember her ever being very excited for Halloween when I was little—though I should probably see if she still has that cat costume she made for me because maybe one of the girls will want to wear it next year—but I think she used to love Halloween when she was younger (her family would put on a spook alley at their farm house and everything).

Andrew was—again—held up (this time he had to pick up awards for soccer) so I had already fed the kids dinner and had started getting them into costumes by the time he came home.

"NOW can we carve the pumpkins?" Rachel asked, running to get the pattern she'd printed off the other day.

Andrew carved those pumpkins in ten minutes flat. And he only cut himself once, so...

I actually don't have any pictures from before we went trick-or-treating because it took us so long to get ready and out the door but here are some pictures from after (Rachel's coming seriously unwound again): 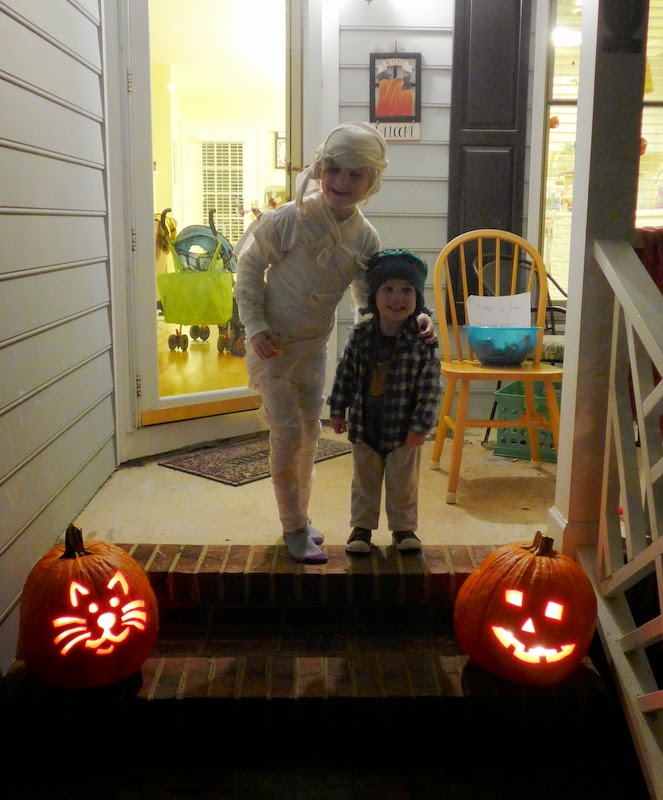 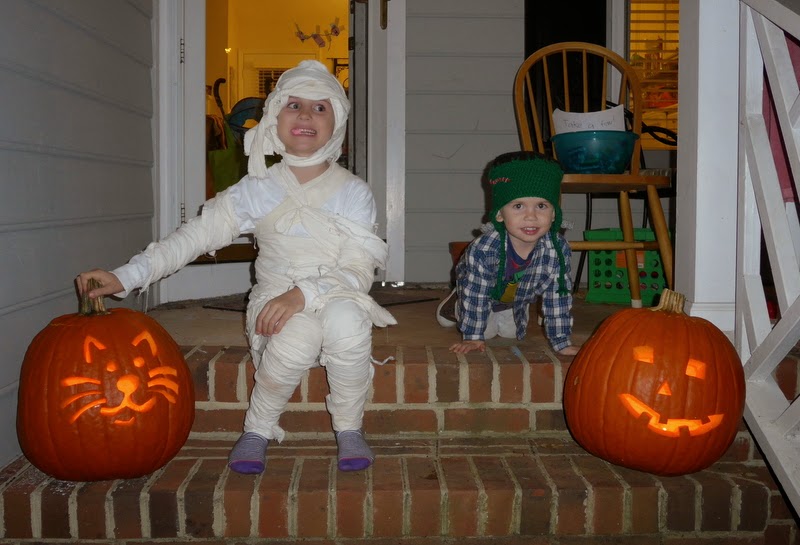 I've been the default trick-or-treater taker-outer for the past...forever. This year Andrew said he'd do it but he's also the default pumpkin carver and was stuck carving pumpkins when the kids were begging to go, so I grabbed the stroller and the kids and said I'd take them up and down our street and then bring Benjamin home.

Two things happened to spoil my plans. First, only five houses on our street participated in trick-or-treating this year. There are fourteen houses on our street. That meant Benjamin had only five pieces of candy in his bucket and that's not a lot of candy. He wanted more. And, secondly, he was quite enthusiastic about getting more. He wanted to trick-or-treat and he wanted to do it himself. He wasn't going to take any short cuts.

"Do you want to hop in the stroller?" I would ask him.

He walked the whole time we were out (which was about an hour and a half). Even when I'd explain that the next half a block or so wasn't "playing trick-or-treat with us" (seriously—our neighbourhood was super lame this year) so we'd just be walking for a while without stopping to get candy he'd insist "Me chick-a-cheat. Me 'alk." So Miriam—dainty flower of a child that she is—claimed the stroller as her chariot when I'd let her.

There was one house that made Miriam cry. It had a goblin decoration with a motion detector or something, so it was flat in the grass until you walked by and then it would pop up at you and make creepy noises. She screamed and ran away to the bottom of the driveway and then stopped and cried. They sent some extra candy back with Rachel.

One house made him cry, too. They had regular spooky sounds playing and then out of no where a loud train whistle sounded and Benjamin flipped out. In his defense it was really loud. And I have no idea what it was doing in the middle of a creepy soundtrack.

Another house had Rachel shaking in her boots. They set up a little spook alley in their front yard (they did it last year, too) with a path of lights to follow. They have spooks dressed up and hiding in their garden but they really only try to scare the big kids. My girls were scared just looking at it and wouldn't set foot in the yard until Benjamin pushed through their cowering figures, proclaiming, "Chick-a-cheat!" He sauntered up the path, high-fived a ghoul hiding by a bush (who about fell over laughing), and walked right past the witches sitting on a bench, holding a cauldron of candy, and made his way to the front door.

"Chick-a-cheat!" he demanded, holding out his bucket to the unattended door.

I had to run up the driveway and direct him back down to the garden bench. It was pretty funny.

He had such a fun time saying "Chick-a-cheat" and wishing everyone a "Happy Ha-uh-een." Every time he wants a piece of candy now he'll come up to me, smile sweetly, and say, "Chick-a-cheat, Mom?"

We called Daddy and asked him to pick us up when we finally made it to our "goal." Rachel wanted to walk to her friend G's house. She lives clear on the other side of the neighbourhood, which isn't a terribly long walk when you're not stopping every few feet to beg for candy, but it turns into quite a long walk when you are (and when you turn down every cul-de-sac for that one interesting-looking house). The kids did a great job walking that far but I think they would have mutinied if I'd have asked them to turn around and walk home (except for Rachel who wanted to stay out).

We came home with not very much candy to show for our hour and a half long walk and truthfully I'm okay with that. We have even less now that we've filled the piñata for Miriam's birthday party. Bwahaha!

Here are the kids after trick-or-treating (looking tired and craving candy): 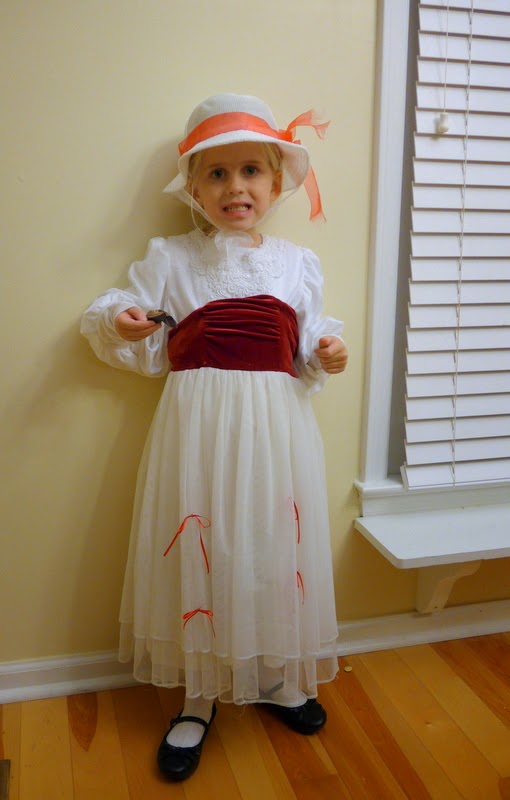 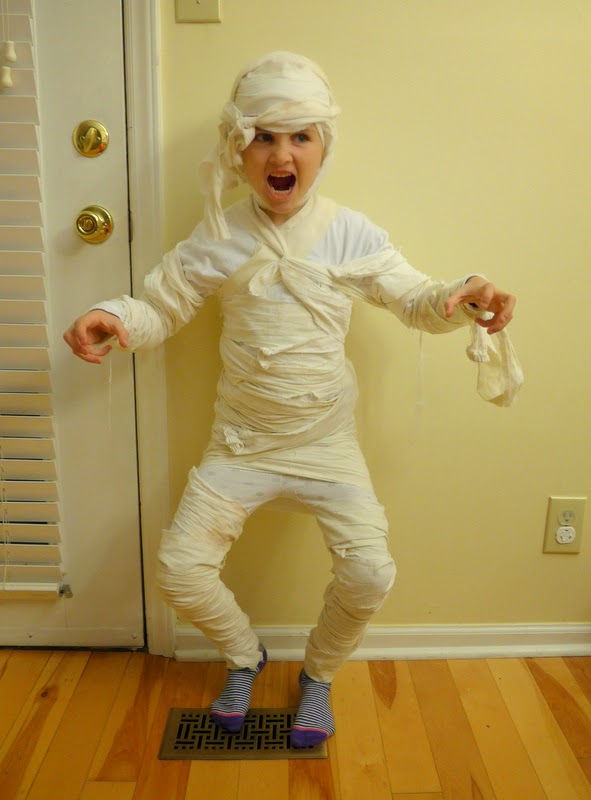 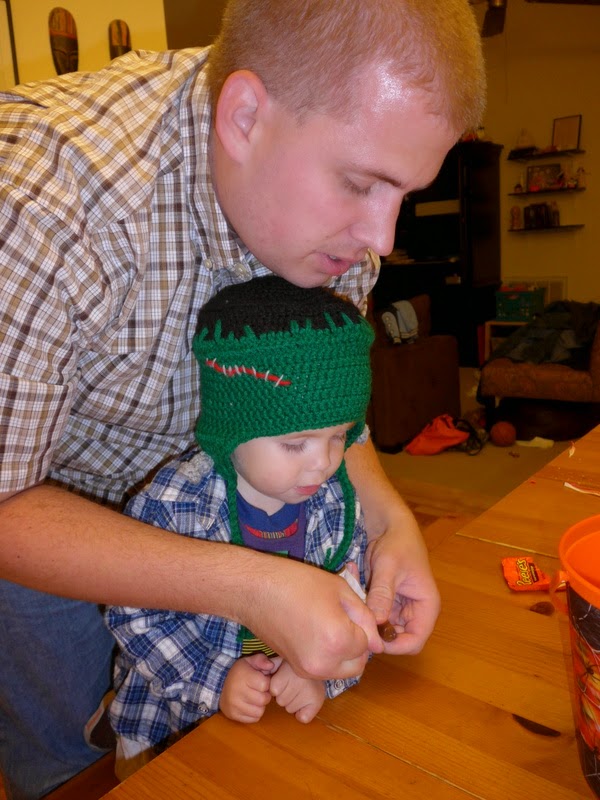 Miriam's already planning on being Hermione Granger for Halloween next year, which I think is awesome because she'll just recycle the costume Rachel wore two years ago, which will make things rather easy for me. Not that I'm lazy, per se. It's just that I think costumes should really get a good using.

Our friends from Cairo—the Houses—posted a picture of their kids dressed up for Halloween and one of them was wearing the same candy corn costume they had in their dress up box in Egypt. I was like, "Way to get some mileage out of that thing!"
Posted by Nancy at 10:18 PM