I'm officially not doing NaBloPoMo this year. I have too many projects going on to commit to blogging every day this month. I already feel like the holidays are upon us and it's only November 2nd. So much to do, so little time to do it.

It got cold here quick this year. We sat down to dinner last night and I was trying to put my finger on why it felt so...wintery...all of a sudden. And then it dawned on me.

"Silence!" I said. "Listen! That's why it feels like winter all of a sudden."

No crickets were chirping. No frogs were croaking. No birds were chattering. Outside, everything was deathly quiet.

Like the trees—that start dropping leaves the second the thermometer drops below 80°F (Oh, no! It's fall!)—the animals here sure get into hibernation mode fast and it was their silence that made the turn of the seasons so obvious.

Part of me is sad we'll be going to Utah for much of Christmas break because I love me a nice, mild North Carolina winter. Utah winters means icy roads all the time, shoveling drive ways, and frozen feet. But it could always be worse—we could be going to Canada (except that Andrew vowed to never go to Canada during the winter ever again after that one time I dragged him up to Alberta in November—it was the coldest he'd ever been and he does not wish to repeat that ever (and I don't blame him)).

I suppose I should share a few thing about Halloween before I start talking about Christmas too much.

On Wednesday last week we went to the ward Trunk-or-Treat (after dropping Grandma off at the airport and then racing back home to eat dinner and change into our costumes). 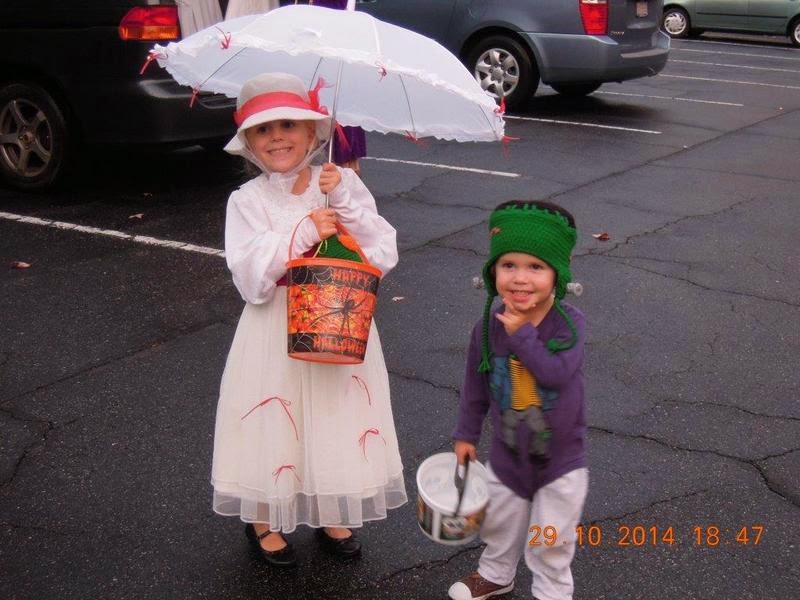 I felt like I was winding that child up forever and then by the time we made it to the church she was already coming undone all over the place.

There are reasons I never became an ancient Egyptian embalmer. Just sayin'... 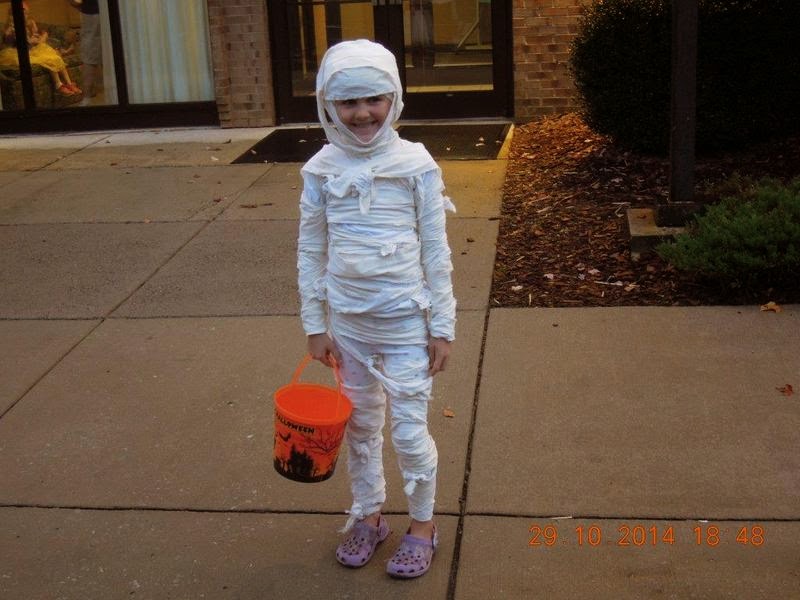 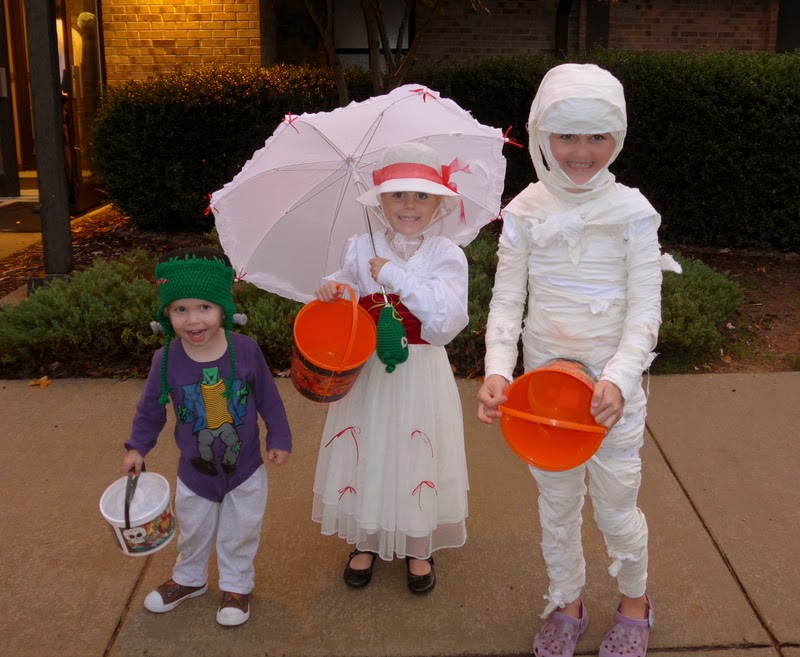 We signed up to supply a Halloween bowling game for the carnival. I went the lazy route and bought a set instead of crafting one on my own because, like I mentioned, the holidays already have me feeling swamped. Coming up with costumes for my kids and making a cute bowling game? No thanks. It was probably the best $10 I ever spent (because it saved so much of my sanity). 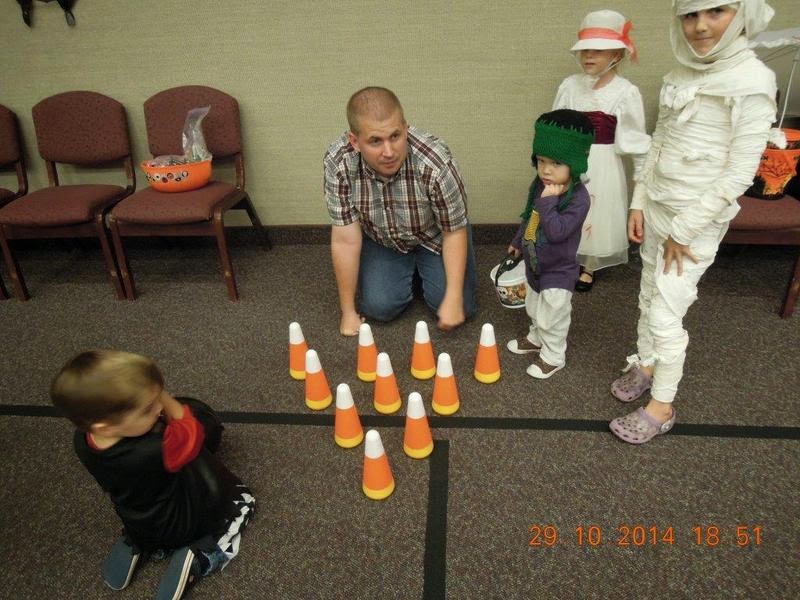 Here's Benjamin trying it out: 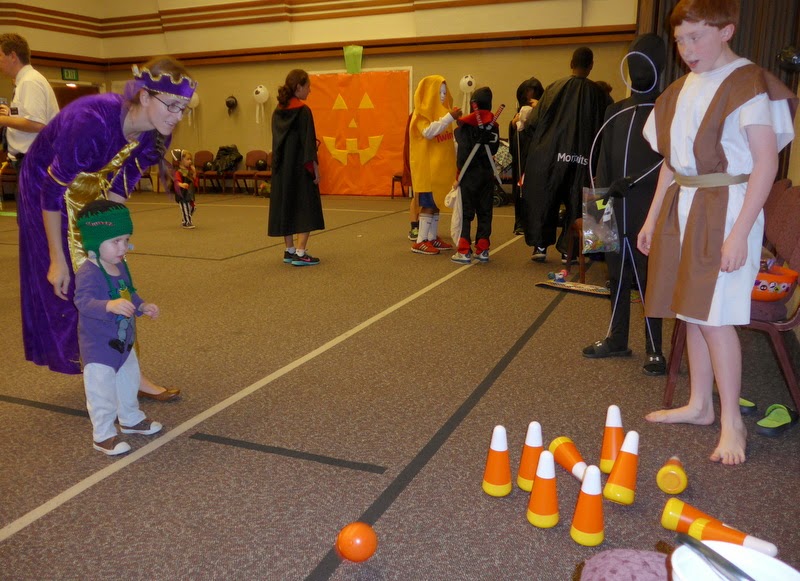 Rachel flipped out at the mad scientist lab two years ago and she's been hoping to redeem herself ever since. So when she found out they had one this year she armed herself with "whatevers" and bravely thrust her hand into each mystery box, even though it was dark and spooky music was playing.

"Whatever," she said as she squished monster eyeballs. "I know those are peeled grapes."

"Whatever," she said as she felt the witches toenails. "I think this is coconut."

"Whatever," she said as she let werewolf brains slide between her fingers. "That's obviously spaghetti."

She was quite proud of herself for being so brave.

Miriam, on the other hand, fled the room when the first dissonant chord of organ music rang through the speakers and waited for us in the hallway in the sliver of light provided by the open bathroom door.

Perhaps she'll be brave enough to make it through the lab in a couple of years.

Everyone had fun at the donut-eating station though! 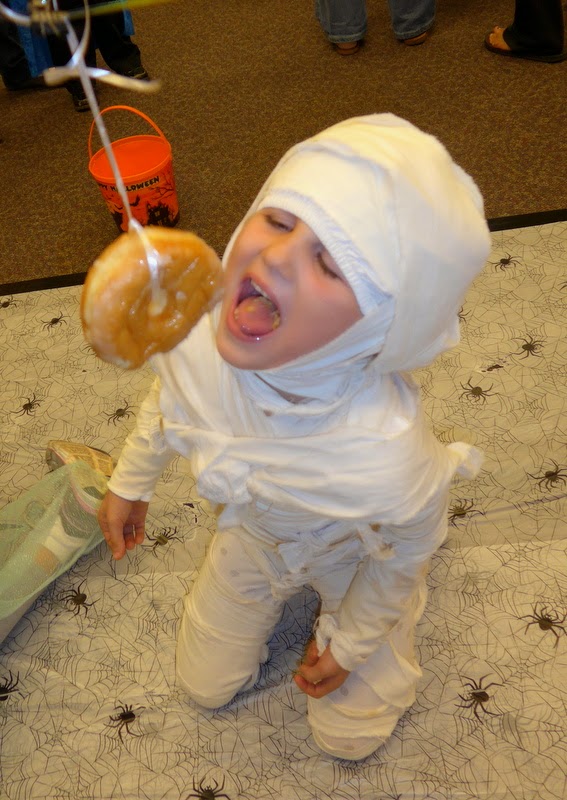 Rachel attacked her donut with a vengeance. Miriam managed to lick hers a couple of times—she was dressed up too fancy to let her inner beast show. 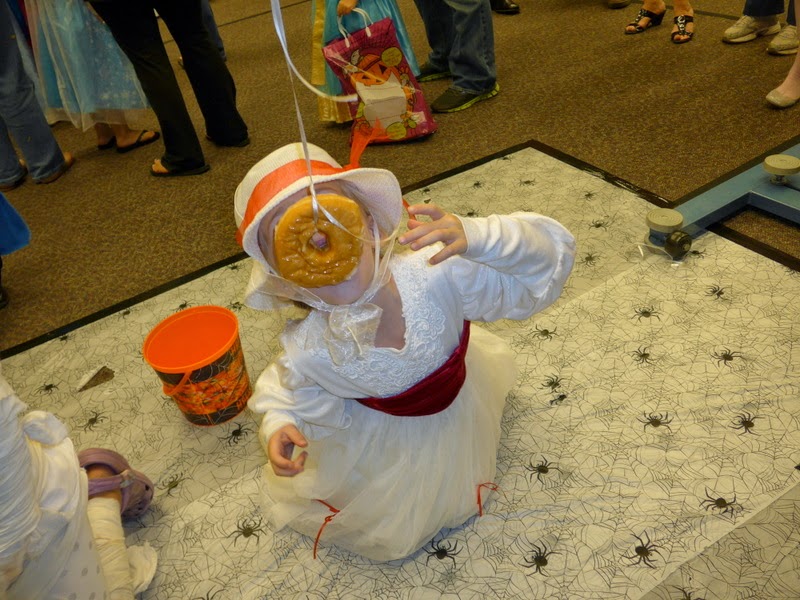 Even Benjamin got in on the action. He was a hoot to watch! 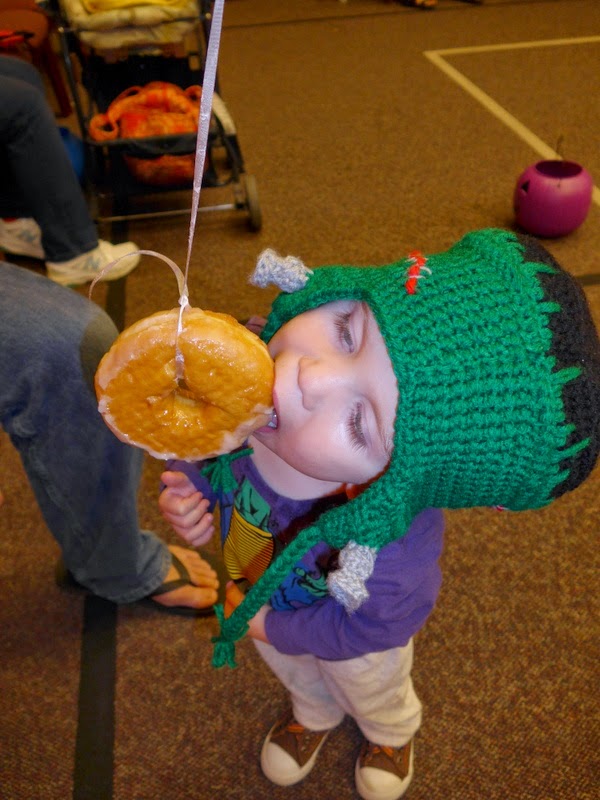 When it came time to announce the prizes we were unsurprised to find that our costumes didn't win in any category. We were, however, surprised when we won a prize for being the second-best decorated trunk on display.

"I didn't even open the trunk. I guess we're not winning anything this year,"  I had just finished whispering to Andrew when we heard, "Second place goes to the Heiss family!" 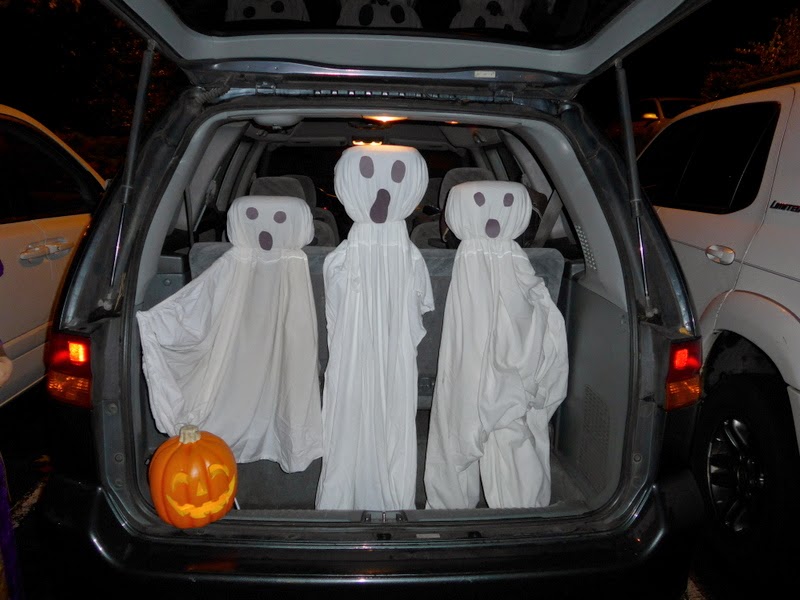 This was all Karen's idea.

Rachel was bugging me about how we were going to decorate our trunk on Wednesday afternoon (when we were trying to get everyone and thing loaded into the van to go to the airport) and I said, "I don't know. Maybe we just won't decorate the trunk this year. I don't have any ideas and we're out of time. Besides, the recycling was collected this morning so I don't even know what supplies we'd use."

"For decorating your trunk?" Karen asked. "That's easy! Just grab a couple of white sheets and drape them over the headrests and turn them into ghosts!"

It was easy. And it won us second place!

We've got a pretty good track record going on here...

Obviously we're also engaged in some kind of on-going trunk-or-treat duel with the Schmutz family. We'll get them next year. Maybe. They go all out, guys.

Like, seriously...they turned their car into a frog this year, with a big tongue sticking out, and googly eyes, and webbed feet, while I'm usually like, "What can I piece together using only garbage and the next five minutes?"

The Schmutzes clearly deserve to win.

(And just so you know, their name sounds more like "smooch" than "smut." In fact, our kids have given up trying to say their last name and just call them "The Smooches.")

I was going to end there but then I realized that I didn't say one word about the actual trunk-or-treating. Benjamin thinks Halloween is a magical holiday. He was strutting up and down between the row of cars, holding his little bucket out like a boss. He didn't even say anything. He just smiled.

(So like his father, who when his mother asked him if he was remembering to thank each neighbour for each piece of candy replied, "When I smile it means thank you.")

Rachel and Miriam were happy to go off on their own. Rachel actually mentioned that that was one of her favourite parts of this party. "I can just go off on my own without parental supervision and just kind of do whatever I want with my friends!"

Luckily she's got some good friends. And there was plenty of parental supervision going on (though we did let her wander around the gym by herself and left her alone in the craft room with Carolina and let her do the trunk-or-treating part on her own).