After two solid weeks of croup-induced sleepless nights, Andrew and I were ready for a change. He'd spent most of those two weeks sleeping on the couch while I'd been sharing the bed with Benjamin, waking up every hour or so to help him through a coughing fit or to find his sippy cup or to go to the bathroom. When I wasn't waking up with him I was being kicked at because he's a fitful sleeper like his sister Rachel.

Co-sleeping with those two was never easy.

Co-sleeping with Miriam was a dream. She doesn't climb in bed with us very often anymore but when she does she lays perfectly still and we hardly even notice she's there.

I could use another infant who sleeps all day and all night, a toddler who takes at least one nap a day until they turn three, and a preschooler who insists on getting at least twelve hours of sleep per night (and will put themselves to bed and/or sleep in, if necessary, to get those twelve hours). It's bliss compared to how the other two were/are. I mean, I love all my children dearly but when I look back on Miriam's babyhood I can actually remember and smile about it. Most of what I remember from Rachel and Benjamin's babyhoods is being desperately exhausted. And a lot of screaming. Oh, the screaming.

In Benjamin and Rachel's defense they both had terrible, terrible reflux (which, frankly, I'd be happy to do without this time around) and Miriam didn't. So perhaps those two were justified to be up and screaming all the time.

Anyway, Rachel's fine now but Benjamin's still not a great sleeper. I told Andrew last night that we shouldn't even bother trying to get him back on a schedule until we get back from Utah because our trip is only going to throw him off again. But then he wandered into our bedroom at around midnight last night and I just couldn't even imagine trying to sleep one more night with him in my bed (I'm pretty sure I have bruises from sleeping with that child—and I'm not kidding).

"Me seep Mommy bed," he asked, reaching up for me.

"No, Benjamin," Andrew said. "You need to go get into your own bed."


He turned around and ran from our room, crying pitifully.

"I don't," Andrew said, stretching out.

I followed Benjamin to his room, tucked him in, and sang him a song.

"Do you want Bus-Bus?" I asked, handing him his bus.

I peeked through the door while I was pulling it shut (well, ajar—he can't open his door so we leave it a little bit open) and saw that he had reached out of his "cassie" (because he's actually still sleeping in that cardboard box we turned into a castle instead of in his bed) for his bus. He snuggled into it and closed his eyes.

And he stayed there the rest of the night.

And it was wonderful. 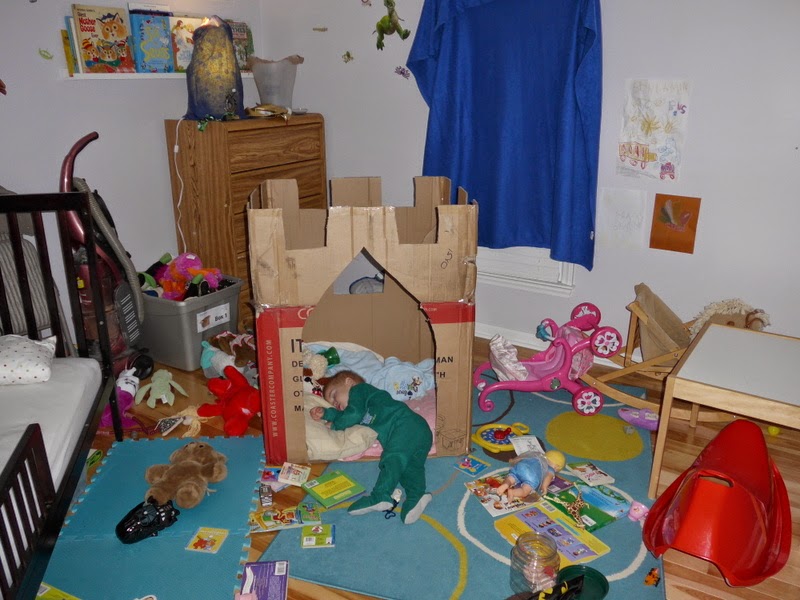 (This picture is not from last night. It's from a couple nights ago. Believe it or not but when he was put to bed there were no books or toys out.)
Posted by Nancy at 10:17 PM