Our schedule has been so swamped this week—with soccer and school stuff and church stuff and life stuff. We've hardly had a moment to breathe! Just yesterday, for example, we left the house at 9:30 and didn't get home until 6:00. That's a long day to be out and about with four little kids.

And then we came home and worked until one o'clock in the the morning.

So today we're extra happy to have a day of rest—even if it involves wrangling children for three hours (for me) and several hours of extra meetings (for Andrew). Yesterday at the baptism we sat near the back (since we were stinky and dusty from soccer), which meant that I got to watch all the people. Usually we sit near the front of the chapel, so we miss out on a lot of that.

It was fun to see the fluidity of children, who spread themselves out between the rows, transcending the familial bonds that so often tie them to their bench at sacrament meeting. We sat in the back with Zoë and Miriam, our little friend Lily sat next to Miriam. I eventually grabbed one of the twins, George, and held him on my lap to give his mom a hand (much to Zoë's consternation she had to hang out with Daddy (ew)). Beside Miriam and Lily were George's big sister and her friend Jada.

In front of us Benjamin cuddled with Sister Newhart. He loves her so much. Earlier this week I told him we were going to the museum to meet up with the Harts—who have a bunch of little kids to play with—and he was utterly disappointed when we found them.

"But when will the Harts get here?" he asked.

"These are the Harts," I said.

"Yes, but when will the other Harts get here?"

"There are no other Harts," I said. "These are the only Harts we know."

We were at the museum the whole afternoon (now that the kids are on an earlier schedule they get out of school around noon when they have an early release day) and the whole time he was whining about not getting to see the other Harts. I didn't even realize until we got home that he was talking about Sister Newhart! Her children are all grown up, but Benjamin just thinks she's great (and I do, too).


Anyway, Rachel sat beside them. The Lewis kids beside her. In front of them was Lily's little sister, the Harts were mixed in somewhere, along with many other families.

I was reminded, once again, that a ward family is truly a family (of sorts). I'm so grateful that we're surrounded by such wonderful people, that they're my people, that we can draw on each other for support in happy times as well as sad.

Anyway, today is the primary program. The kids are excited to share what they've learned this year. I'm excited to listen to them and watch them goof off sit reverently on the stand.

"The scriptures tell us how much Heavenly Father and Jesus love us."

And here is Miriam's part: 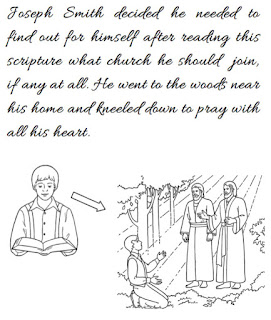 "Joseph Smith decided he need to find out for himself after reading this scripture [the child before her reads James 1:5] what church he should join, if any at all. He went to the woods near his home and kneeled down to pray with all his heart."

Rachel had to write a two-minute talk about her favourite scripture story (which was a little overwhelming for her considering she'd just had to deliver a talk in primary the week before she got this assignment, which meant writing a talk two weeks in a row (but she did a great job)):


One of my favorite scripture stories is Alma 19, the story about Abish.

When Ammon came and taught king Lamoni and his court the gospel, the king and queen and everybody collapsed. Abish was the only one left standing because her life of faith had prepared her for this moment. She had been converted to the gospel much earlier, “on account of a remarkable vision of her father.”

Abish realized that this was her chance to share the gospel she loved with her people, so she ran “from house to house” to tell everybody. After the people gathered, the queen woke up and helped teach her people. The king was still looking asleep, and everybody who was awake thought that he was dead. The queen thought that the king did not stink, so she asked Ammon if the king was dead. Ammon said that he king was not dead, and said he would wake up in three days. The king did, and taught the people about the gospel.

I like this scripture story because it includes one of the three named women in the Book of Mormon. It shows that everyone can share in the gospel—even Lamanites and woman and children. It also shows that we can teach the gospel to our friends and neighbors. It also teaches us that the gospel is really powerful—tons of people collapsed because of it in this story! I bear my testimony that we can all share the gospel in some way, like Abish! In the name of Jesus Christ, Amen.

I listened to them from the lobby yesterday afternoon, but I'm excited to watch them in real life. Getting up in front of everybody takes a lot of guts!
Posted by Nancy at 10:00 AM