We toad-ally had fun

We took a semi-spontaneous trip to Washington, DC this past week (thus the reason for the radio silence). The children have been begging to go (museums! history! road trip!) since spring break of last school year, I think. We tried to go over the summer but it just didn't pan out. This was our next opportunity and even it almost didn't pan out, thanks to the gas shortage.

Here's a picture a friend took of a gas station not too far from our house: 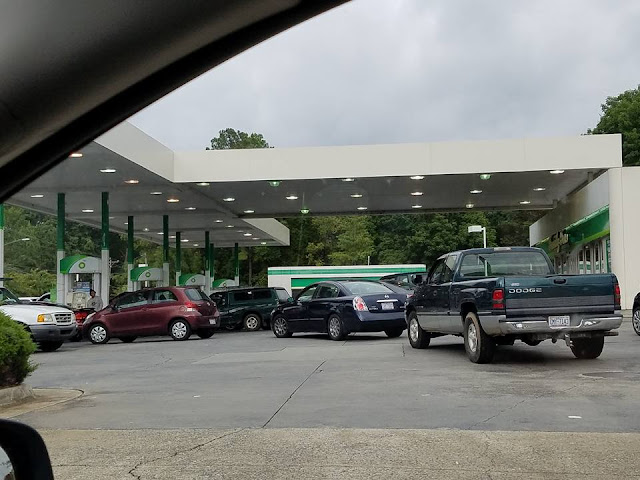 Some stations were out completely, some stations were only allowing $10 purchases, all stations raised their prices significantly. Getting out of town was looking pretty iffy, but then Andrew was able to gas up at Costco where things were remarkably normal and news started trickling in that the pipeline had been repaired and Virginia hadn't really started to suffer the way we had down in North Carolina, so we figured if we could at least make it to Richmond (which we knew we could with a full tank of gas) that we should be good to go. So we went. And it was fine.

Anyway, the night before we left Rachel still had soccer practice but it was cancelled for Miriam and Benjamin because the fields were too muddy. Rachel's been riding to soccer with a friend and we decided to let her just go with them again instead of taking her ourselves because we had a lot to do to get ready for our trip (since we'd decided to go for sure). She was a little upset about our neglectful parenting ("You never come to my practices anymore because you're always too busy and now even when you have a free night you still don't come!") but we were able to talk her down from that cliff (she's always been our little "donkey on the edge") by sharing stories from our childhoods about going to practices by ourselves.

Staying after school for track.

Our parents didn't watch every little thing we did...how could they?! Likewise, we're not going to attend every single thing our kids do because...how can we?! Making it to games is one thing but, uh, sitting around to watch you practice? I'm pretty sure you can do that on your own. It doesn't mean we love you any less. It simply means you get to spread your wings a little more. You're welcome.

Also, we had to pack and drive around town to find gas and deal with other children. So...

While Rachel went to soccer with her friend, Andrew headed off in search of gas, while I packed stuff up and got the three younger ones ready for bed. They requested a bedtime walk, so we went on one (sometimes I tell myself that it will help them fall asleep faster (this is always a lie)).

On the way we found a toad hopping across the road, so I gave Miriam some advice on how to catch it and pick it up (hold it firmly—like you'd hold my hand—but not so firmly that you squish it) and she did, and then quickly dropped it, screaming about how unnerving it felt to hold such a living, breathing, slimy creature. After chasing it around for a few minutes she managed to catch it again and this time she carried it all the way home so that she could show Daddy and Rachel (both of whom had made it home). 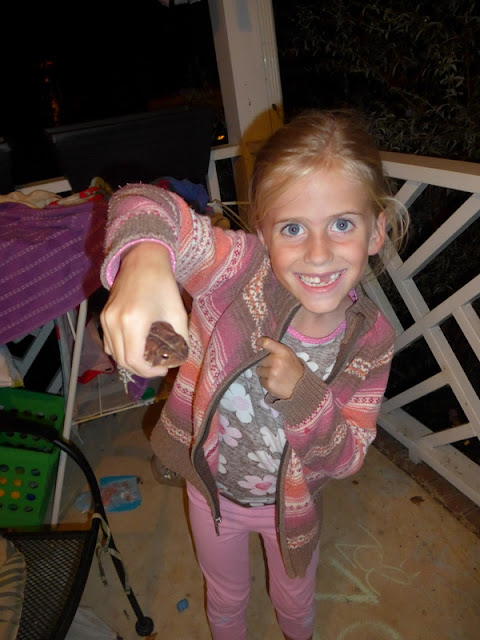 Andrew was not a fan. 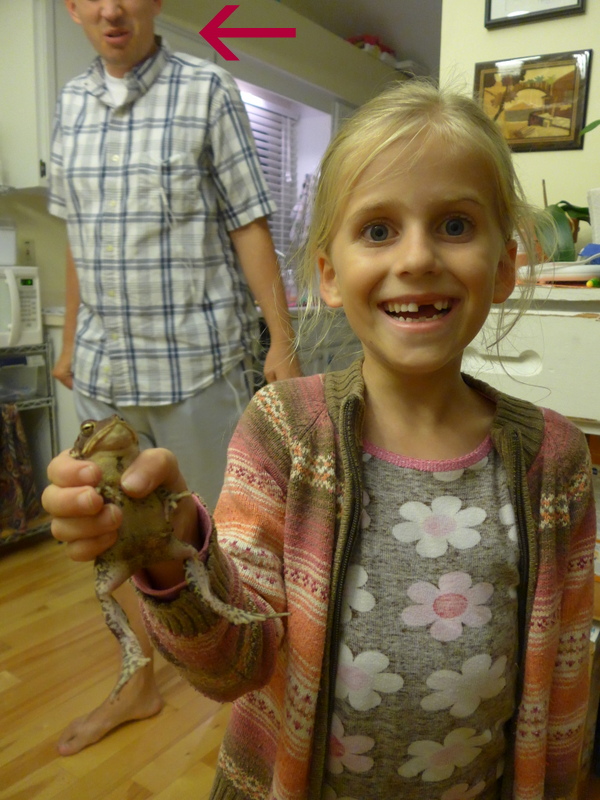 In fact, after she let it go he made her wash her hands in hot, soapy water and then rubbed hand sanitizer all over them before he'd let her touch anything in the house.

Benjamin was the only other child brave enough to touch it. Rachel stayed as far away from it as possible and Zoë, though remotely interested, wasn't keen on getting up close and personal with that toad. 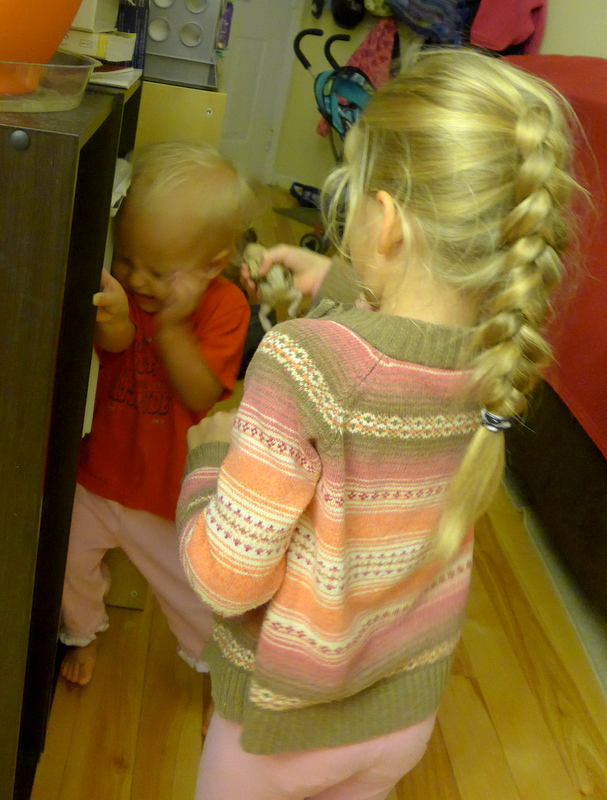 I'll save the rest of the toad pictures (or perhaps it's a frog (I suppose it's definitely a frog since all toads are frogs (though not all frogs are toads, similar to how all squares are rectangles but rectangles aren't necessarily squares))) for later when I have Miriam's little narrative on finding the frog (because I assigned my children homework this week). 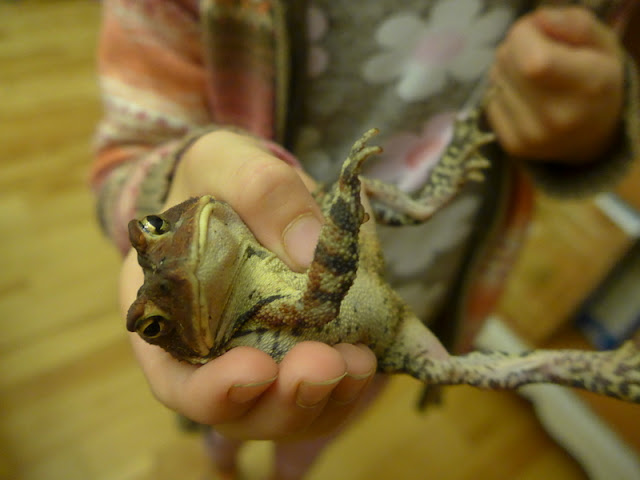 She showed me her rough draft and it was cute, but now I can't find it. She wants to make some changes to it, so I suppose that's fair. But I wanted to save some pictures to go with it, which means you have more frog pictures to look forward to. 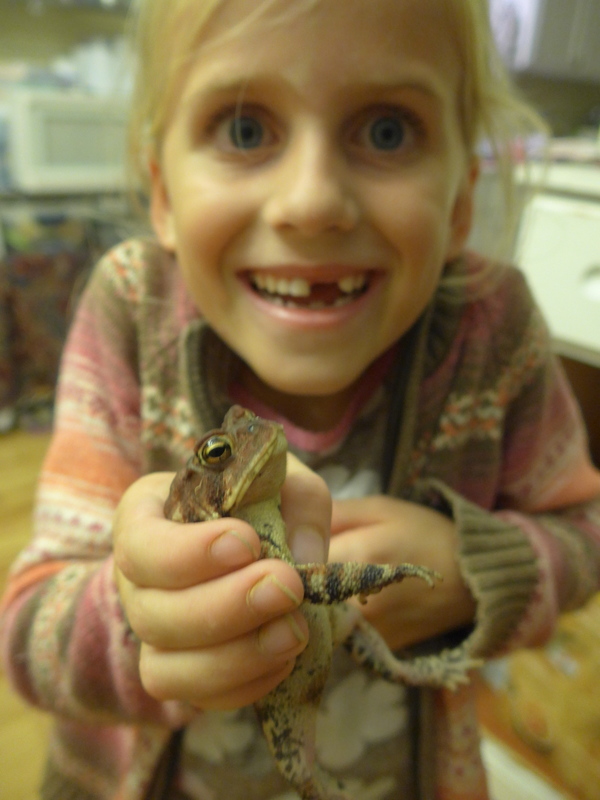 You should also probably gear yourself up for a whole lot of posts about our trip (with an accompanying smattering of pictures) because I took notes and have several good stories to share. I have so many other things going on though, but between editing our family newsletter (due to be published this weekend) and the tricorne hat I've suddenly found myself making for Benjamin and a needy, needy (needy, needy) baby, I'm sure I'll find the time to get everything written down.
Posted by Nancy at 11:46 PM