The door is open, come on in!*

After a somewhat awful night with Zoë (because what else is new) I decided to sneak a little nap in on the couch yesterday afternoon while Zoë was (miraculously) napping and the kids were playing across the street. I was far too sleepy to entertain the idea of staying awake while the house was so blissfully quiet but I wanted to be available if they needed me/I wanted to stop them from bursting into the house and waking the baby, which is why I chose the couch.

"Yes, get a drink," I moaned from the couch, trying not to allow myself to wake up too fully.

"Close the door, please!" I called to them on their way out.

I contemplated getting up to close the door-door, but I figured it was fine being open. The storm door makes a terrible racket when it's pulled open so it's not like anyone could sneak into the house. "Besides, no one usually comes to the door, anyway..." I said to myself as I drifted back to sleep.

Soon I was ripped from my sleep by someone rapping on the glass panel of our storm door. I jumped off the couch (which is in full view of the front door, by the way) and ran to answer the door, somewhat wild-eyed and disoriented, I'm sure.

Standing there was our home teacher. He was holding a big box.

"Do you have a stand mixer?" he asked.

"Well, this for you," he said. "Every woman deserves a stand mixer in her kitchen."

"Wow, thank you so much!" I stammered.

"Maybe in twenty years, you'll pull this out to make cookies and you'll think of me," he said.

Then he dropped the box off, bid me a good day, and left.

I collapsed back on the couch for another ten minutes or so (Zoë had woken up every hour the night before and then had spent the entire day screaming her head off; I was exhausted). I woke up when I heard Andrew's scooter pull into the driveway and chuckled over the strange dream I had—someone had stopped by to give me a brand-new stand mixer! Haha! How ridiculous...


Imagine my surprise when I nearly tripped over a box in the entryway on my way to the door.

Evidently the whole stand mixer thing was not a dream.

"Brother B. dropped off a stand mixer...?" I greeted Andrew, still a little confused.

"Oh, that," Andrew said. "Yeah, he asked me about it on Sunday and wanted to know when your birthday was. I said it was in June but mine was next week. He said he didn't want to wait for June but that it's for you, not me."

So apparently Andrew knew about it, but it was certainly a surprise for me!

We made cookies last night, just to break the stand mixer in.

This morning Benjamin climbed into bed with me and whispered, "Thanks for making cookies, Mom! They were so good!"

"Did you help yourself to a cookie for breakfast?" I asked.

"Mom," he sighed impatiently before explaining, "I had four. Because I'm four."

That's always a good way to start the day, right? For the rest of the day I let the kids destroy the house while I worked. I'm editing a book right now and I'm hopelessly behind schedule, but I wanted to get the next couple of chapters in today (I really should be working right now, truthfully). The house was a disaster by the time I called it quits. 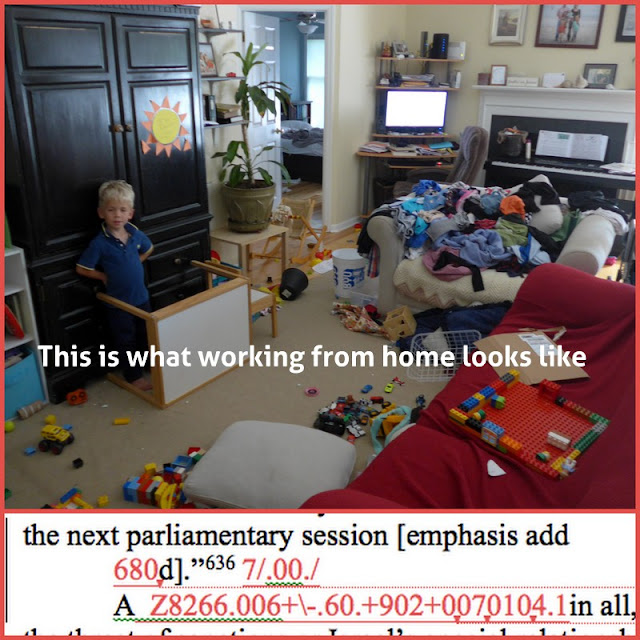 (That screen shot is from when Zoë attacked my unattended keyboard while I was away from my desk for a minute. Thank goodness for tracking changes, otherwise this manuscript would have so much random gobbledygook in it!)

The girls came home from school and practiced the piano and then we ate a very balanced snack/dinner of ants-on-a-log and cheese string** and crackers and tomatoes and veggie straws and cashews and other random stuff we had sitting around before we ran out the door for our evening of soccer extravaganza.

When I left the house with all our stuff I still was worried we hadn't gotten everything so I left the door open in case someone needed to run back in and grab something.

"Does everyone have knee-high socks?" I asked.

Everyone confirmed that they did.

"Okay, then we're good to go," I said and I hopped into the van and drove away.

It wasn't until I got to the stoplight that I realized...I may not have gone back to shut the door to the house. As I drove on (it was too late to turn around) I turned it over and over in my brain. Had I? Hadn't I? Had I? Hadn't I?

We pulled into the after-school care parking lot and I hopped out to collect our little friend. And then I debated about what to do. Run home and check? Send Andrew to check on his way to Miriam's field? All that would take too much time.

I decided that the best solution would be to text my neighbour.

"Can you do the silliest favour for me?"

"Well, I'm just can't remember if I closed the front door or not..."

Haha! Want me to go check for you?

"Yes, please. And if it's open will you go ahead and lock the bottom lock for me?"

Yup. It was hanging wide open.

Some days, I swear I would lose my head if it wasn't attached. Fortunately (and very obviously) we are surrounded by good people who look out for us, otherwise I don't know what we'd do!

* I always sing this to the tune of one of Charlotte Diamond's songs Sasquash, which my husband and children are also not quite as familiar with as I am. Charlotte Diamond is a Canadian artist, so that's probably why. But I should probably introduce my kids to more of her songs so they can be part of their childhood as well.***

Here's evidence that I'm not crazy. There is a song. And it is cheese string.

Black Diamond cheese is a Canadian brand, however. So that explains that.***

*** That's two Canadian Diamonds in one post. I just thought I'd point that out.
Posted by Nancy at 10:55 PM