With a population of 1,917, Vulcan is no bustling metropolis, so I don't recommend it as a destination vacation. However, its small town charm is—dare I say?—out of this world. It was perfect for a little afternoon fun! 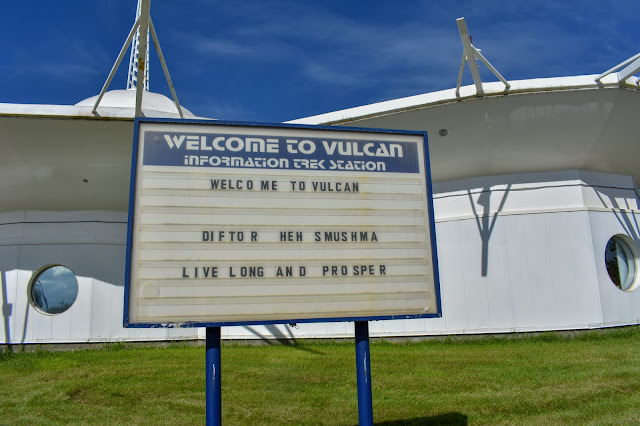 This is the intergalactic visitor's center in town: 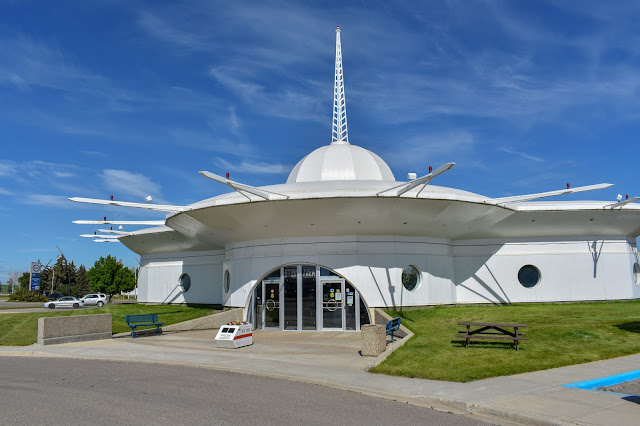 It doubles as a gift store/shrine of all things Star Trek. There's a chair signed by several actors in the series who've made a stop in Vulcan, along with a ton of memorabilia (toys, cups, games, clocks, etc). 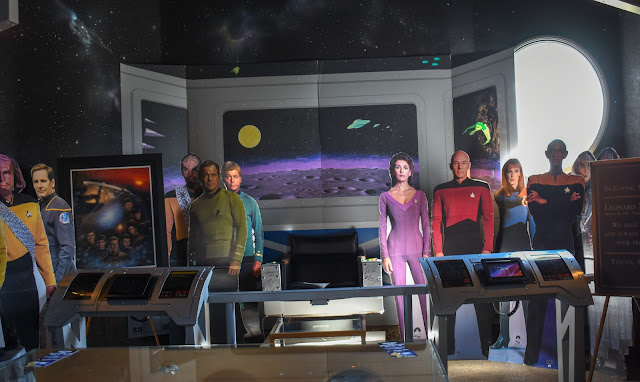 Here's Zoë looking at a few things (I guess she was my museum buddy again because I only have pictures of her): 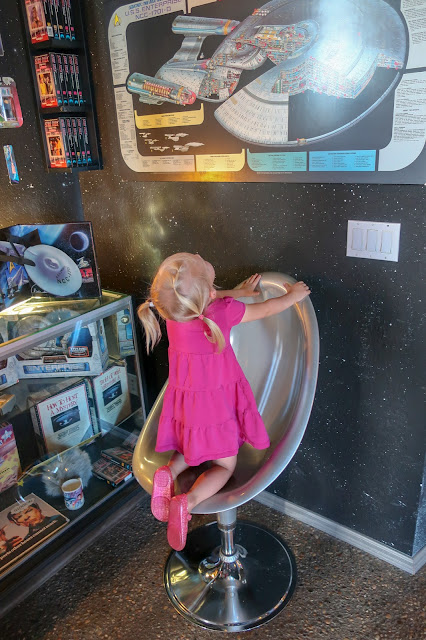 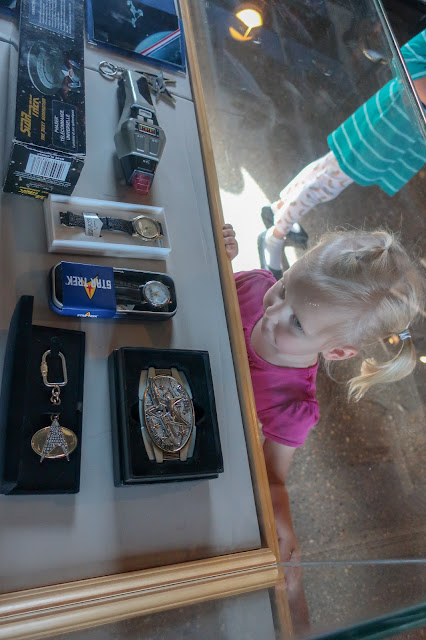 The town was floundering in the 1980s and during a meeting on how to liven things up a bit, someone suggested embracing their name and going completely Star Trek on the world. Evidently everyone agreed and they decided to go all in—town council members wear Star Trek uniforms and Vulcan ears to official events, they have a Spock-Days Parade and host a Vul-Con. Tourism has really boosted the town's economy in the last 30+ years and the town is constantly adding new things.

Here are the street lamps up and down Centre Street (new, it seems, from at least 2008): 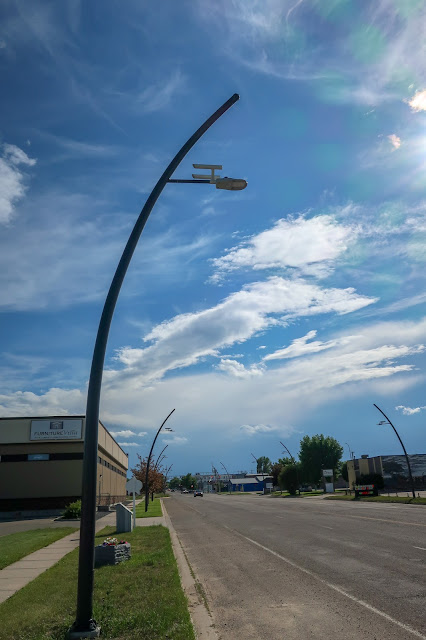 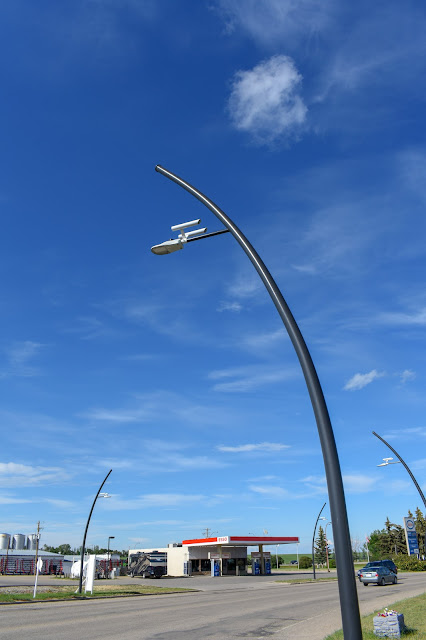 Let me zoom in a bit for you there: 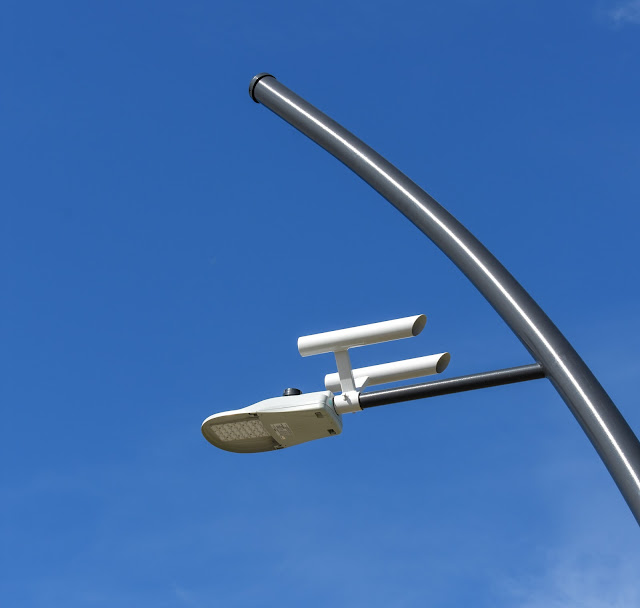 Everyone was particularly excited to visit Vulcan's model of the Starship Enterprise. It has its own name, FX6-1995-A, which "is named after Vulcan Airport's designation - FX6." 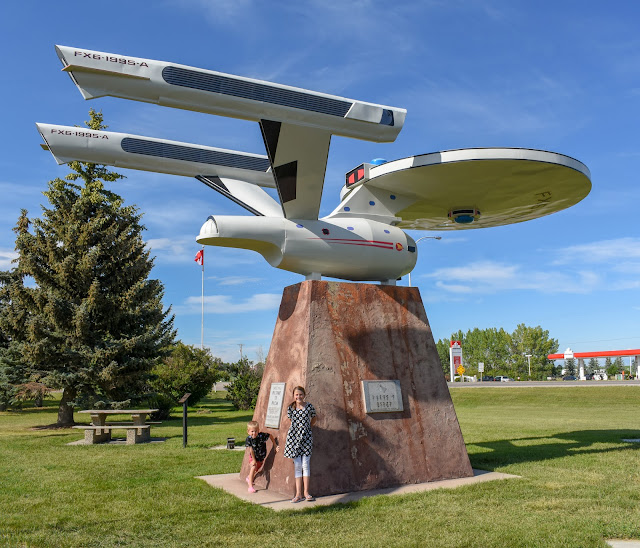 You might be wondering why such a small town has an airport (I was). My initial thought was...crop dusting...but actually until 2015 the Vulcan airport was the base for the Southern Alberta Gliding Center (a youth pilot program). There's a second airport near Vulcan as well, which was the base for an Air Force training program during WWII (and which now hosts the gliding center). 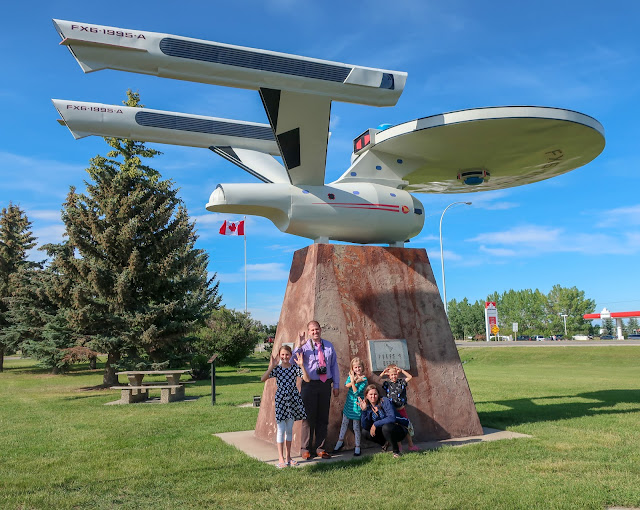 Here are a few more pictures of us with the starship: 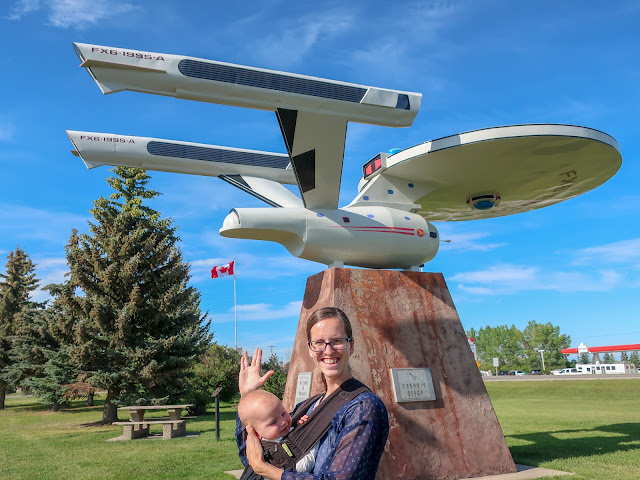 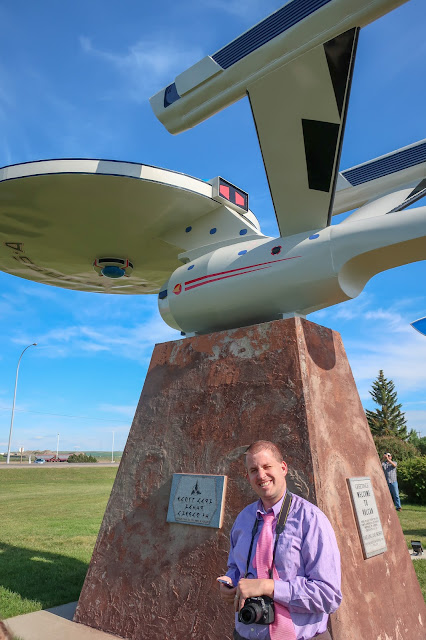 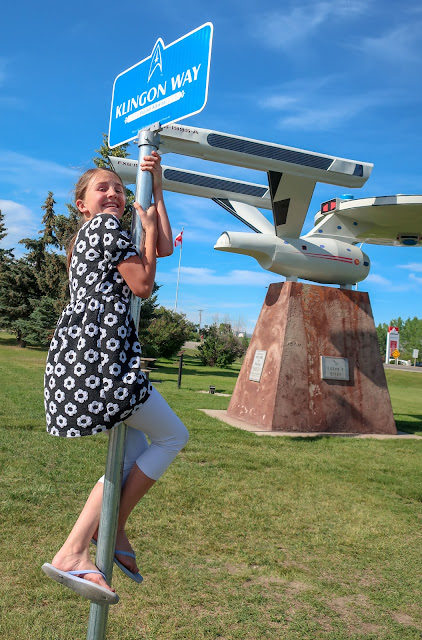 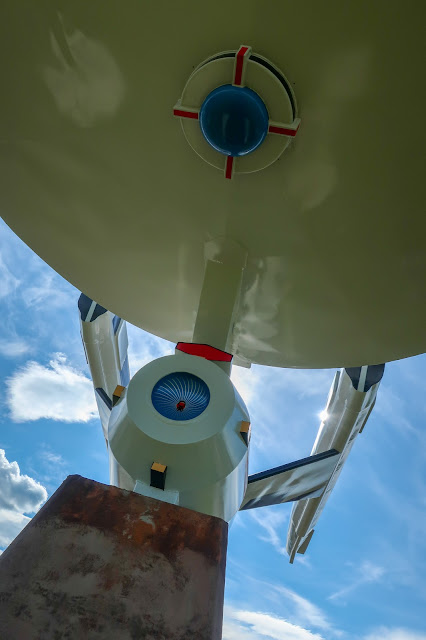 The town of Vulcan was named long before Star Trek was even thought of; it was incorporated as a village in 1912 and gained the status of a township in 1921. We learned from a sign near the starship that it was "named after the Roman god of fire by the C.P.R." Everyone stared quizzically at the sign. 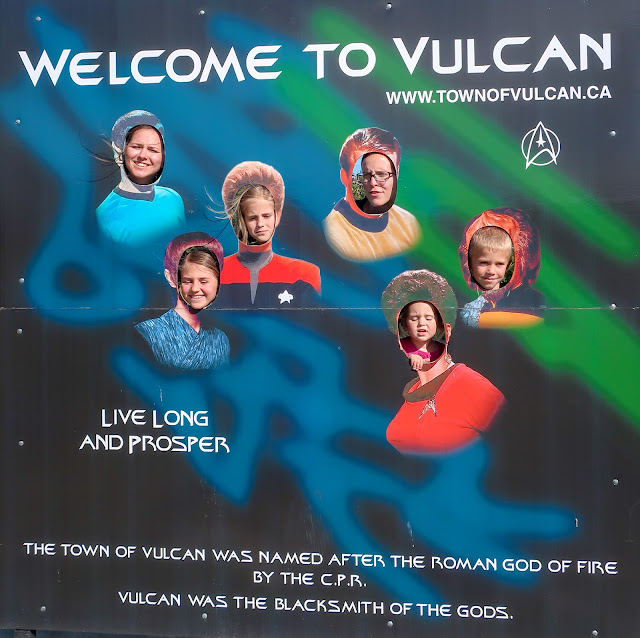 Those railroads, always thinking they can name places whatever they want. I was looking up all sorts of town names when we were up in Idaho a couple of months ago and came across the story of how Shelley, Idaho, got its name (Auntie Emily and her family live in Shelley). According to Wikipedia,


It was named for John F. Shelley, who moved to the area in 1892. He'd moved to the area intending to open a small store, and needed lumber and other supplies to build it. Since the site was some distance from the nearest existing community, he asked the railroad company to make a special stop to offload the supplies he'd ordered. They consented, provided he could offload the supplies in under 20 minutes....

They succeeded in doing so and eventually the railroad made a proper stop in the vicinity. John F. Shelley's daughter Charlotte recorded the following regarding the naming of the town:


Mother suggested 'Shelco'; Father said, 'Shelton,' so they drew cuts and Mother won." Shelco was submitted to the railroad company and they replied: 'Call your town what you wish, but we have already named the spur, Shelley '. That is how the town got its name.

I don't know why I think that story is so funny. Perhaps it's because of Bewitched (season 2, episode 18 (I grew up watching old television shows)) when Endora tells Samantha that she doesn't care what Samantha calls her baby because "Whatever you call her, I shall call her "Tabatha.'"

Anyway, in this case the name choice ended up being something for the town to fall back on, so good job, railway!

Benjamin and Zoë were 100% convinced that this was also a spaceship of sorts (but I think it was simply some sort of solar panel something or other): 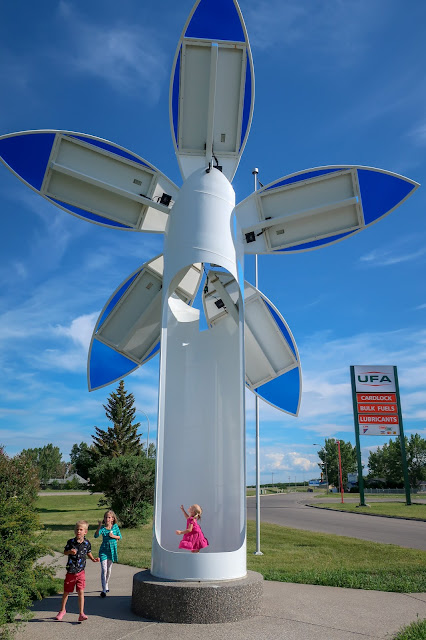 Here we are saying goodbye to Vulcan, after stopping by the visitor's center one last time in order to use the washrooms (which I highly recommend doing because they're decorated rather well, including warning signs that shoplifters will be vaporized): 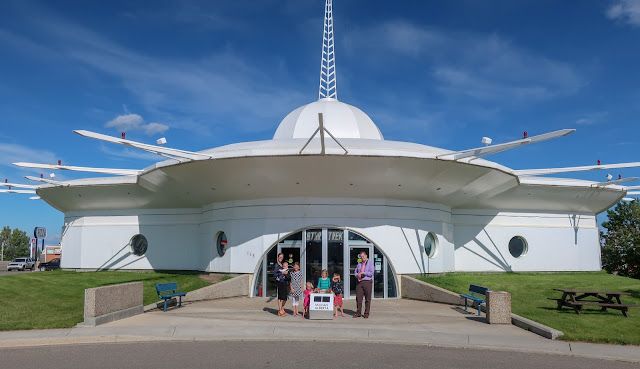 Oh, yeah! And we stopped to take a picture of the grain elevator in town because the grain elevators in High River were torn down several years ago and I wanted my kids to see a grain elevator up close. Grain elevators used to be a common sight but they're being replaced by other storage structures now (being rather prone to going up in flames, I believe). They're quintessentially bucolic in my mind. It's difficult for me to imagine a prairie town without a tall, milk-carton-inspired "prairie skyscraper" in the centre of town, but that's the way things are trending... 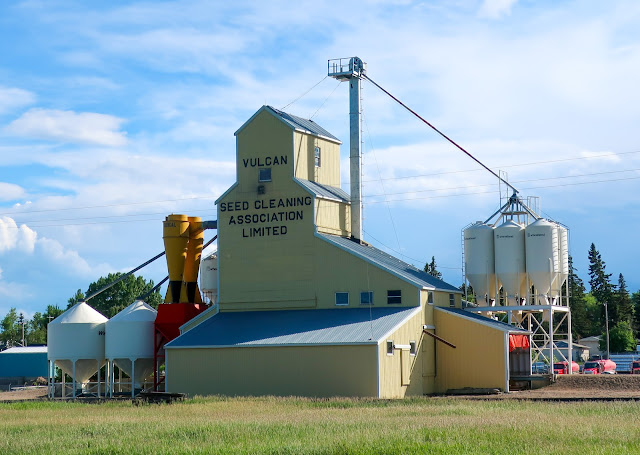 According to Wikipedia, Vulcan once boasted "nine grain elevators, more than any other location west of Winnipeg, making it the largest grain shipping point at that time." Today it only has this one seed cleaning building but who knows how long this old wood-cribbed elevator will last.


A storm was rolling in as we were driving home and I had to take some pictures because Alberta skies are (as Zoë would say) delectable: 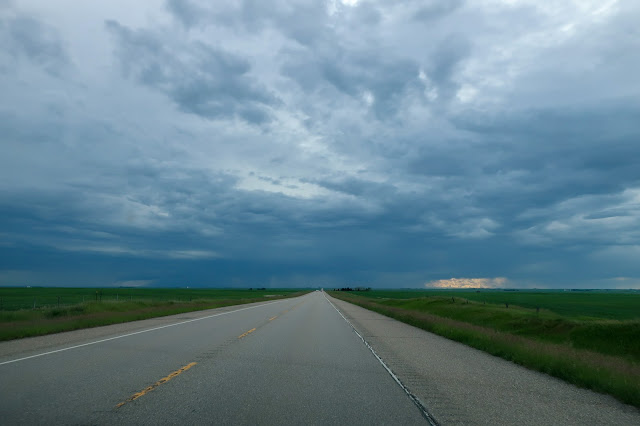 They're endless...along with the rolling prairie.

Andrew was laughing about how flat the prairie is as we drove along this road. "This has to be the straightest road on the planet. It goes on forever."

I guess it's easy to build a straight road when there are no obstacles in the way—no trees, no hills, just the prairie forever. 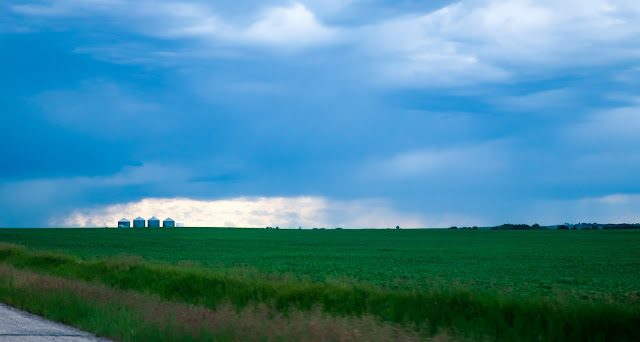