I had a goal to be completely finished chronicling our trip to Canada by tonight, but I fear that won't likely happen at this point. Life just keeps on happening. I either have to find a way to write faster or have life slow down...

Benjamin was hovering beside me while I was writing about the trip Rachel, Miriam, Alexander, and I took to visit the Okotoks Erratic (back in May) and the number one question he had was, "When did I go to that place?" followed up with, "Where's the picture of me there?"

So naturally when he realized that he'd be coming to Canada with us this time around he immediately began pestering me about visiting Big Rock. We finally got around to it on Saturday afternoon (after the Canada Day festivities). My cousin Heather came along again, bringing her kids and Sara Beth's Anna along with her. We had a blast! 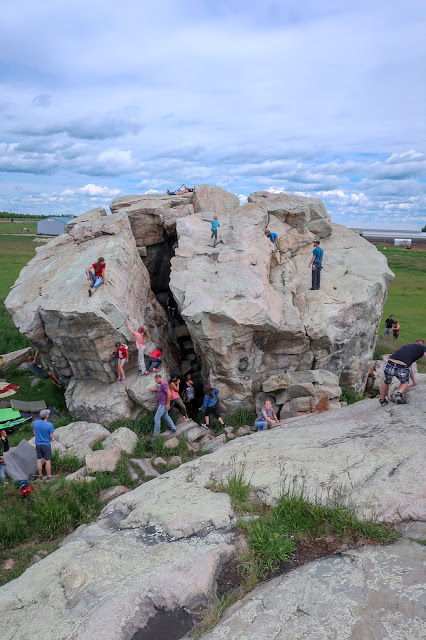 Andrew had a lot of fun playing with various camera lenses. Here you can see the prairie running into the foothills which in turn run into the Rockies: 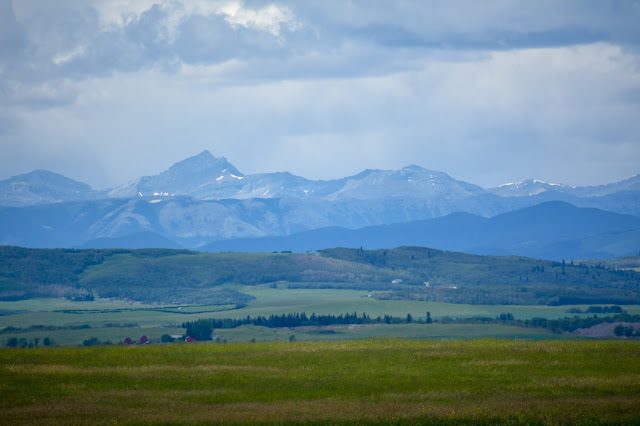 Here's a view of Big Rock: 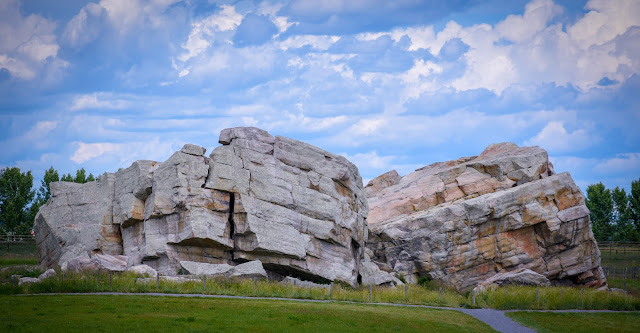 And here's a little prairie dog: 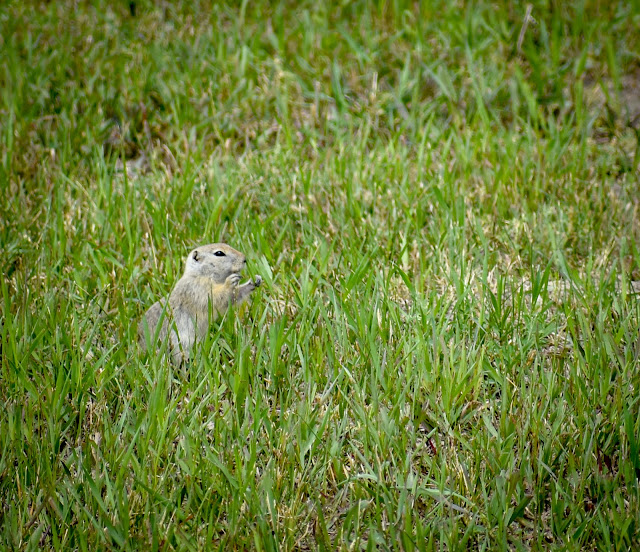 You have to watch out for these little guys, as well as their tunnels. Poor Andrew way backing up to take a picture of David and his girlfriend, Ruth, walking along with Zoë and Benjamin. He backed off the path, into the grass, and into a prairie dog hole (which caused him to lose his balance). 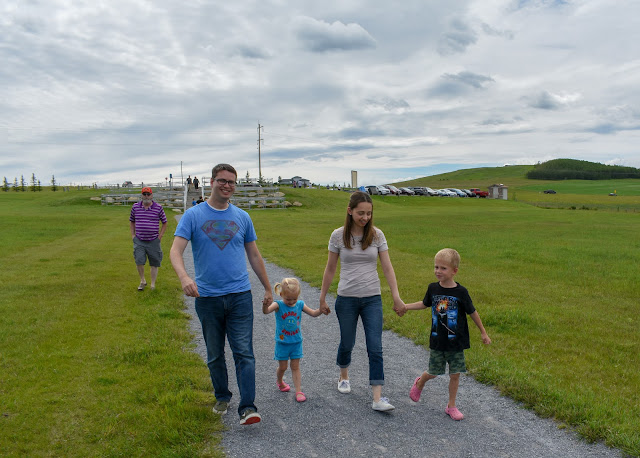 But he got a nice picture, so it was worth it... 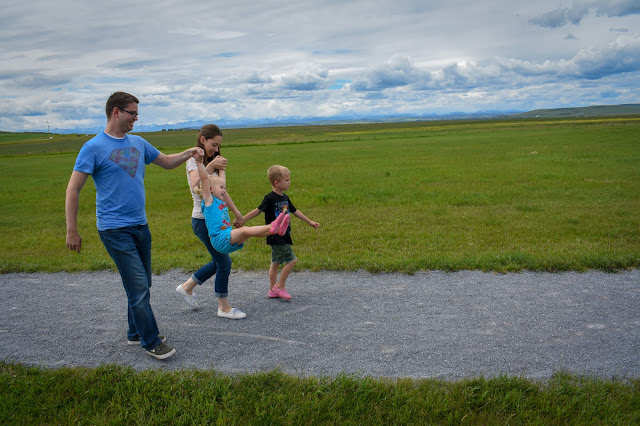 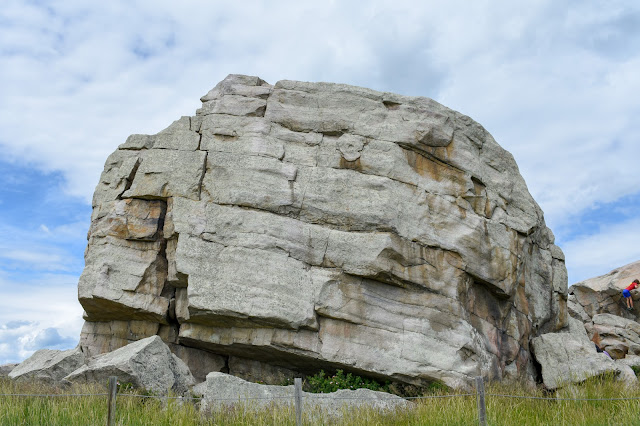 The kids were, of course, rather excited to do some scrambling on the rocks. They are never not excited about scrambling on rocks. Some of our neighbours have rock gardens out front instead of grass (very wise of them in this climate) and every time we walk past their house the kids shout, "Yay! Rock jumping!" before making a wild dash for their yard. Here they are scrambling up some considerably larger rocks: 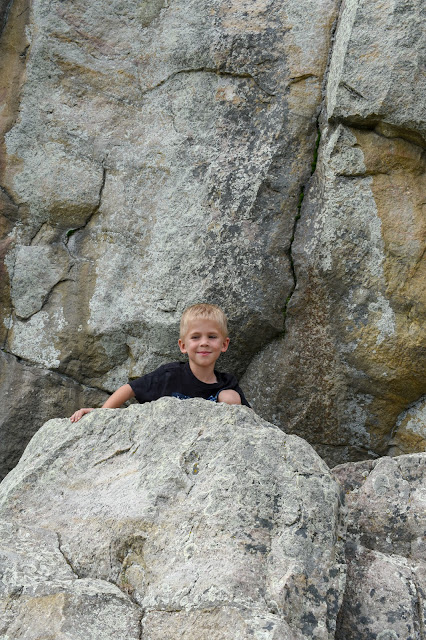 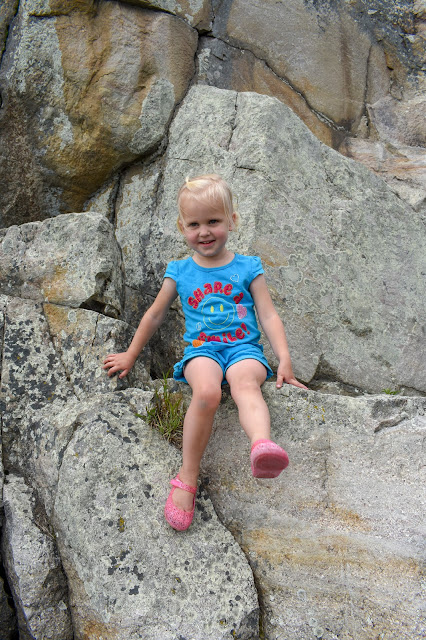 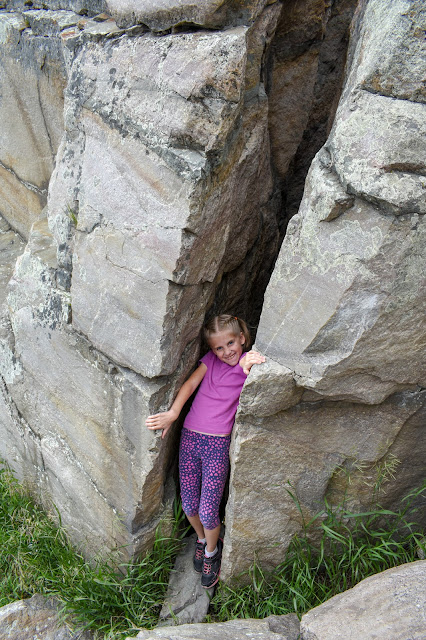 Alexander didn't do much scrambling, but I sat him on a ledge to take a few pictures anyway: 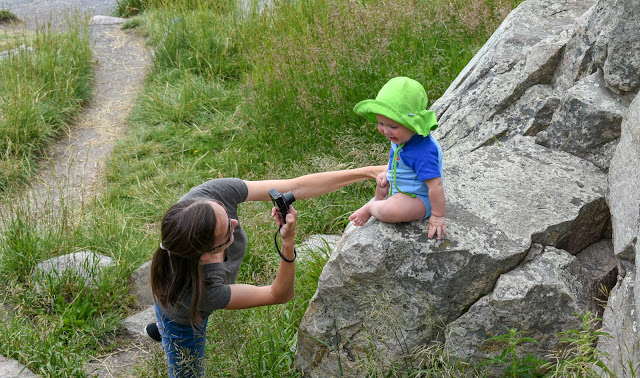 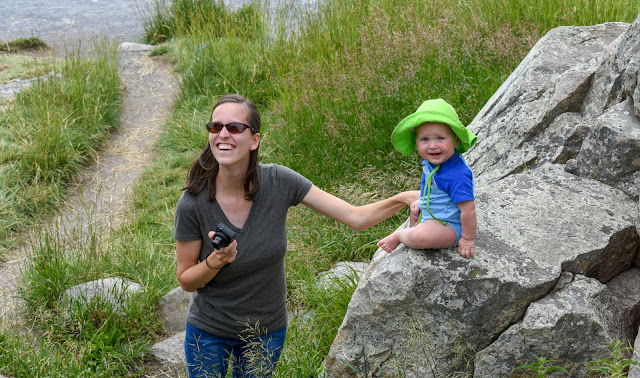 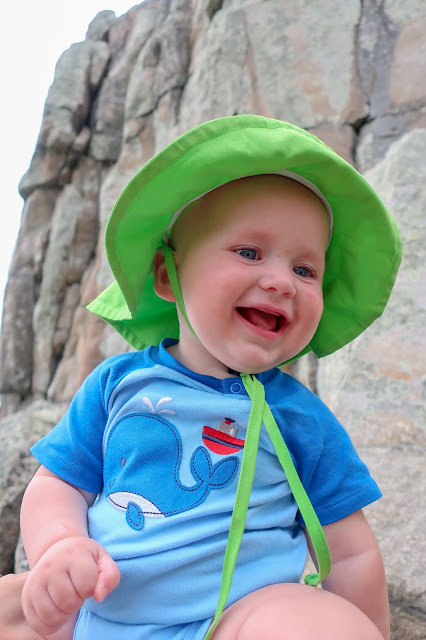 I did most of the kid-chasing for our family, while Andrew took pictures, and my mom held Alexander. 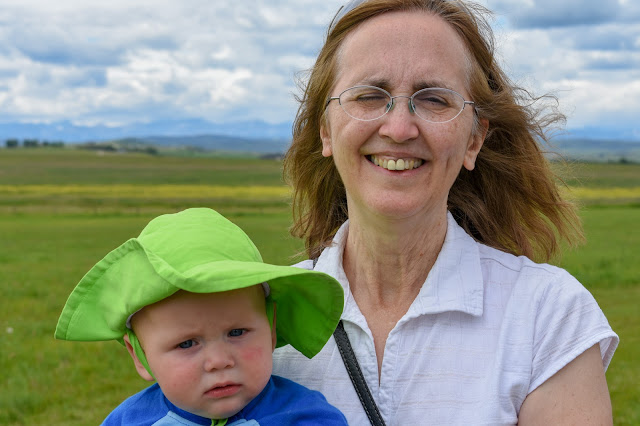 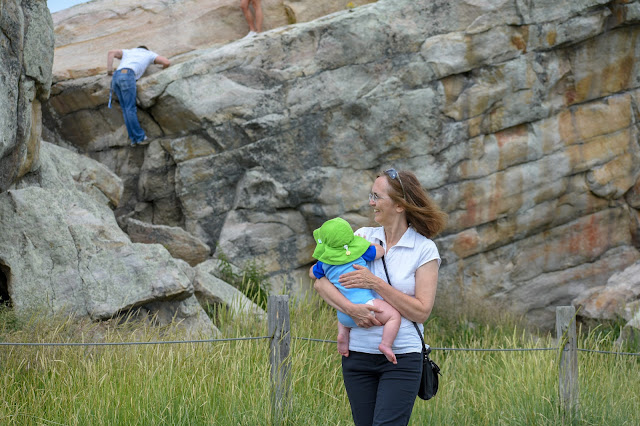 He did not approve of having me out of his sight...

...so every now and then I had to climb back down to give him some relief. 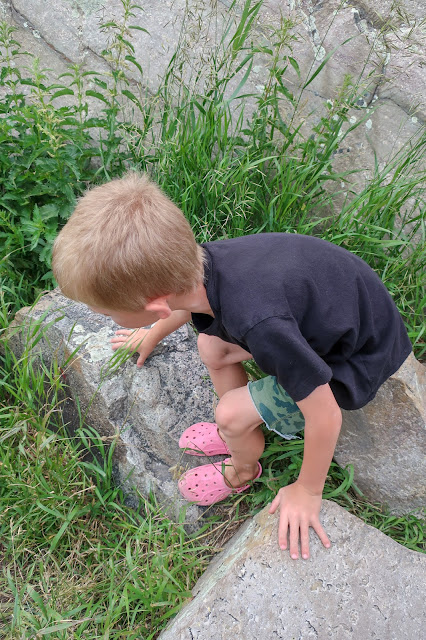 I've never really come across stinging nettle before, but there's quite a lot of it near Big Rock. Stinging nettle causes an immediate rash, whereas a rash from poison ivy can take hours or even days to develop. But I think stinging nettle rashes are easier to relieve (at any rate, the rash tends to disappear within a day, unlike poison ivy). 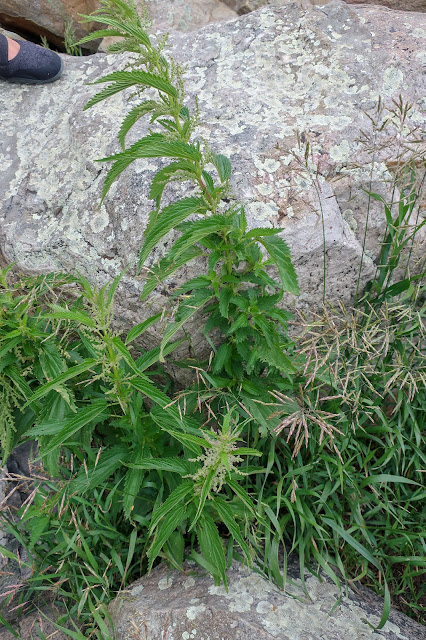 Part of the reason I think this is because Heather's daughter Miley slipped off a rock into a patch of stinging nettle and emerged with angry welts on her neck and face and arms. She was rather upset about it, but some more experienced climbers who were also visiting the rock came over and suggested that she salve her skin with dandelion leaves. That seemed to work for her (though I can't find anything about that online; perhaps it was simply the act of wiping the skin with the clean leaves because I read that you should wash the skin with soap and water or, if no water is available, use a clean cloth to wipe your skin).

She was the only one who wound up with a rash, so I'd say we did pretty well (for having so many children with us).

With that, I'm about out of stories! We just came, we climbed, we conversed, and we took a lot of pictures, so brace yourselves... 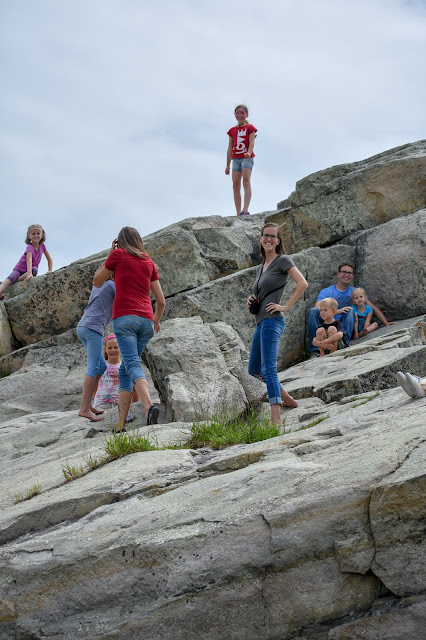 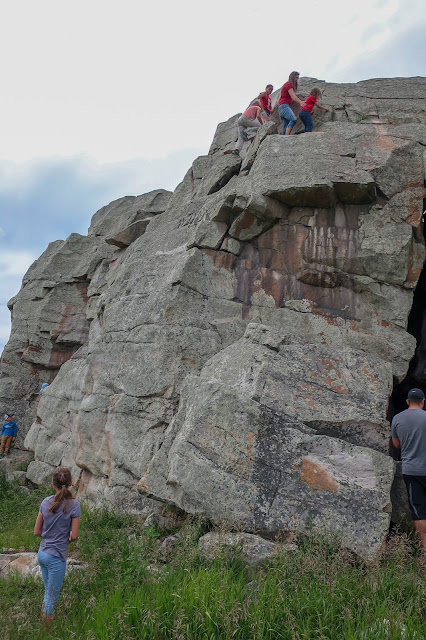 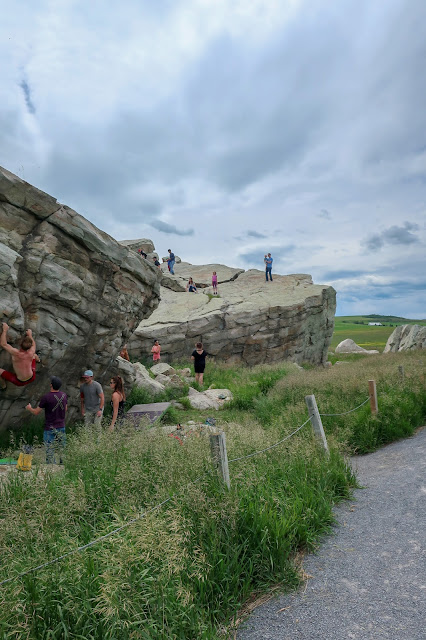 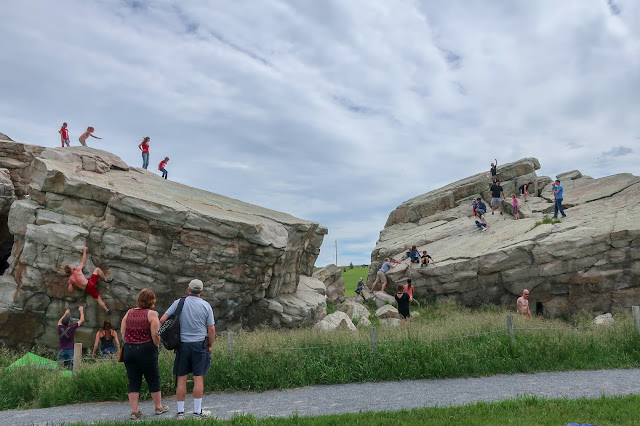 The little cousins all had so much fun together! They were happy to learn that while the rest of our company would be heading to High River, we had plans to explore the river behind Heather's house for a while. These little cousins get along so well—oh, how I wish we could get them together more often!
Posted by Nancy at 12:45 AM