We have had so much cousin time lately; the kids have been in heaven. "I didn't know we even had this many cousins!" one of them exclaimed to me. And they honestly may not have known it even though I was well aware of the plethora of cousins out there. 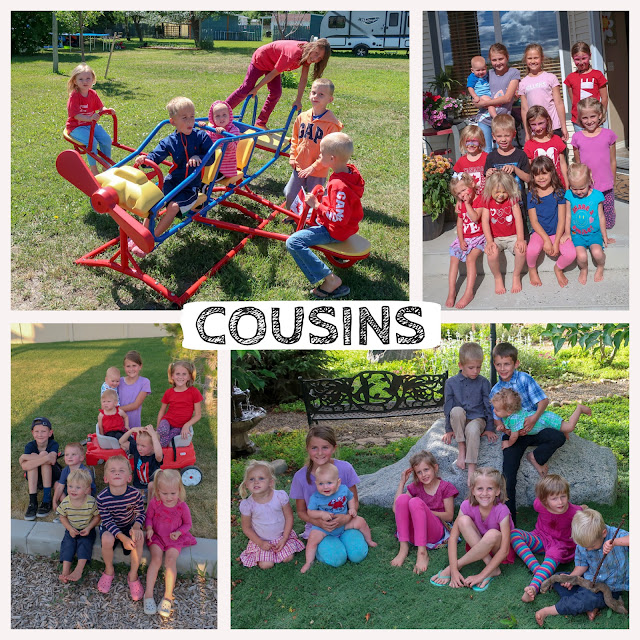 Top left—third cousins: Benjamin loved playing at Dwaine and Janet's because they have a few boys his age that he could pal around with. One night it was after 10:00 when I realized I had no idea where he was! He was still playing hard with his (third) cousins. Bedtime is tricky in the summer the farther north you go because the sun doesn't even start setting until 10:00 and we were in a tiny little town where we didn't worry about the kids running off into traffic so they all just got to run amuck (which I'm sure is great for their little souls). We had 26 people spending the night at Dwaine and Janet's (and three more were over that evening who did not spend the night) so things were a little chaotic and we were all happy to have the children play outside! (Technically there were eleven little cousins there for them to meet at Janet's, but then there were all the other Navratil cousins running around and there are (almost) literally a bajillion of those so we didn't ever get to sit them all down for one photo).

Top right—third cousins: Rachel and Miriam, in particular enjoyed Lavon and Dennis's grandchildren. Between Heather and I we have eight girls (and two boys). Sara Beth's girls came to play as well, so we were overrun with girls! Ten girls between the ages of two and eleven!

Bottom right—second cousins: We were lucky to meet up with my cousin Michelle at the farm in Grassylake! She'd driven up from North Dakota with her five children. We haven't seen each other in so long! We both have five children but the last time I saw Michelle was at our cousin Elizabeth's wedding...when Rachel was just brand new! Things have certainly changed since then!

Bottom left—second and first cousins: Today Richard and Diana came to visit with us (technically they came for a family reunion on Diana's side of the family, but we can pretend we were their sole reason for visiting). Riley was here, and Jacob, Shayla, and Carter stopped by this evening as well. I didn't realize we'd have so much company over for dinner until it was already nearly 5:00 so suddenly instead of making dinner for 10 (our family of seven plus Grandma, Grandpa, and Riley) I was making dinner for 18! We whipped up some French toast and scrambled eggs (due to a communication error Andrew and Grandma had made separate trips to Costco and they each purchased a huge flat of eggs so we have eggs coming out of our ears) and enjoyed all the chaos of  feeding ten children ten and under. And then we went to the park to get our sillies out before bedtime.

And now for a few pictures of me with my sweet cousins... 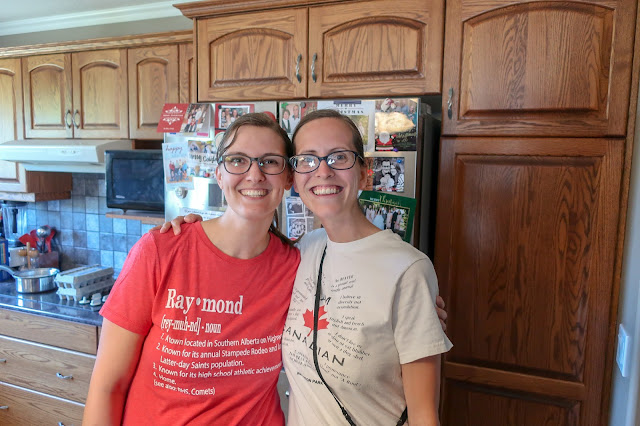 While at Janet's house, we played on the Family Search app that lets you connect with people near you to see how you're related. I relearned that Andrew is my ninth cousin (through the Trent line on my maternal grandfather's side...and I can't remember how on his side). Apparently we'd first discovered this back in 2011 when the algorithm was doing a trial through BYU. So he'd remembered that we were distant cousins.

At least we're not Melissa (Tracy's sister) who recently learned that she is fourth cousins with her husband.

That felt rather too closely related considering my children are third cousins with their children, but honestly, family lines get rather difficult to keep track of after so many generations (and I think my sister's friend Kellee accidentally married her second cousin (not that she married him by accident, just that somehow they didn't know they were second cousins (how could they have not known is beyond me))).

And here I am with Heather, also my second cousin. We grew up in neighbouring towns so were always friends/cousins: 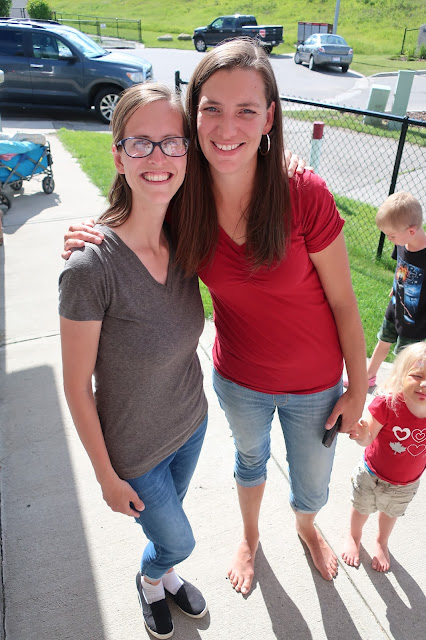 And here I am with Michelle, who I apparently haven't seen since 2007! Thank goodness for Facebook/blogs/family newsletters! It was strange for both of us to be at the farm with all our kids running around because it doesn't feel like it was so long ago that we were the ones running around. 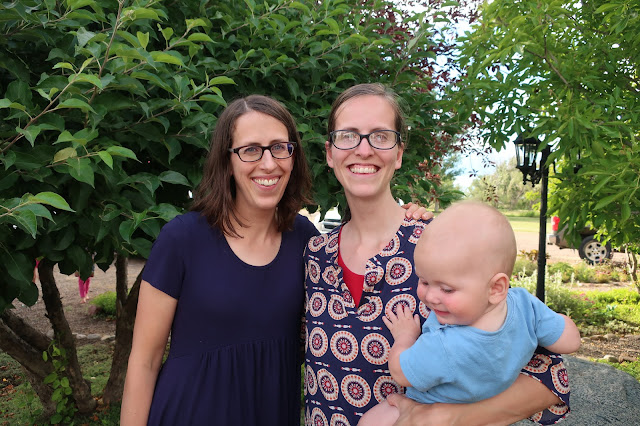 I'm so glad we've gotten to see so many cousins the past couple of weeks!

(Also, I need to learn how to stand so that I minimize glare on my glasses. I know to tilt my chin down slightly...I just forget to all the time).
Posted by Nancy at 1:57 AM