We spent the night in Idaho Falls on July 2nd. It was quite the rush to get down there after leaving the Canada Day parade in Raymond, but we made it around 10:30 at night...except we made it to the wrong hotel! Apparently there are two Best Westerns in Idaho Falls and we'd set our route to the wrong one. The other one was just down the road, however, so the lady at the desk gave us directions and we were once again on our way.

"There it is!" Benjamin squealed. "It's behind us!"

"No, it's not," Rachel seethed (her patience was just about gone at this point in the trip). "Shut up!"

"No, it's right there!" Benjamin insisted. "Cotton Tree Inn! Dad turned left and he should have turned right!"

Thank goodness for little readers! Benjamin had indeed found our hotel and we got checked in as quickly as possible so that we could get our little brood into bed.

They were all excited for hotel breakfast in the morning (fruit poops! DIY waffles!) before setting out to meet Auntie Emily and her family for a little pit stop at Hell's Half Acre (the rest stop at mile marker 101 on I-15). Or at least at what used to be called Hell's Half Acre. Now it's called the "Lava Trail System," which is a much more boring name. But whatever it was called, these little cousins were excited to get together again.


Zoë was particularly perplexed because Maren was wearing "her" pants (when in fact they are Maren's pants that just happen to be exactly the same as Zoë's), probably because my cousin Tracy's daughter had borrowed a pair of Zoë's pants to go to the parade (it was a cold morning and she'd forgotten to bring pants). Zoë was anxious to get her pants back from her little cousin and then Maren shows up wearing her pants!

She was fine once we'd assured her that Maren had Maren's pants and Zoë still had Zoë's pants, but it was a tense couple of minutes.

Here are our intrepid hikers who kept running ahead of the group (we took turns chasing after them):

Don't ask me what Rachel's doing here, but I love this picture of her beyond words: 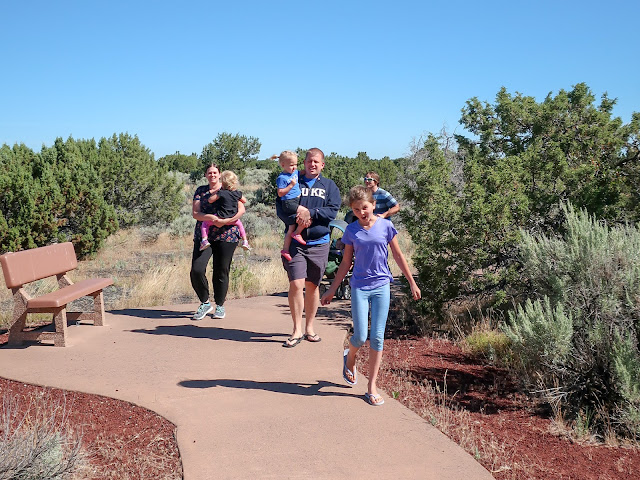 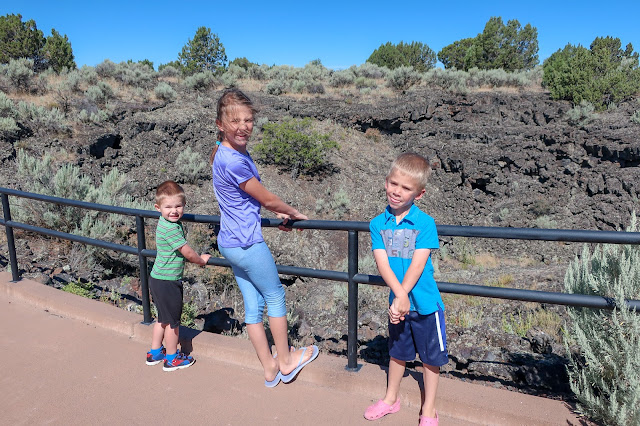 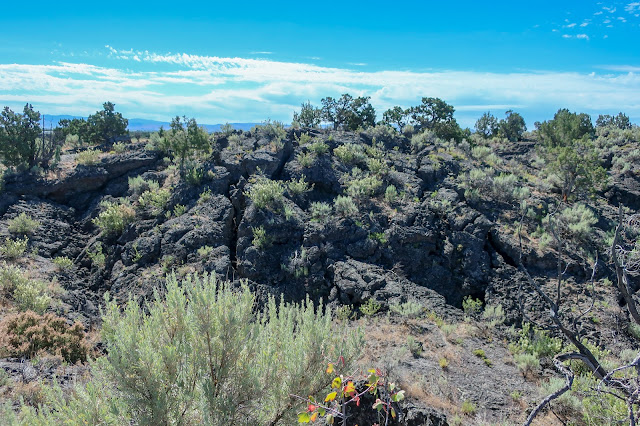 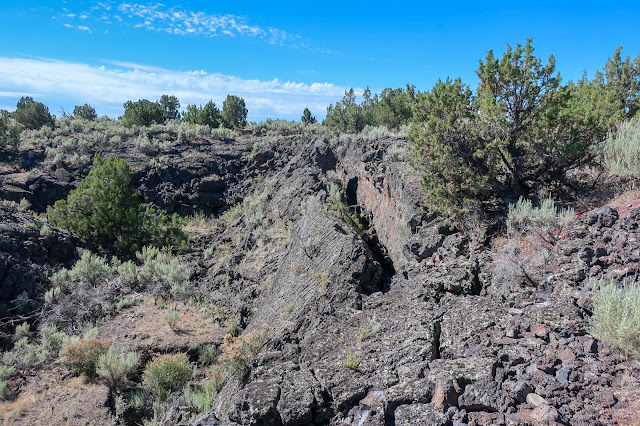 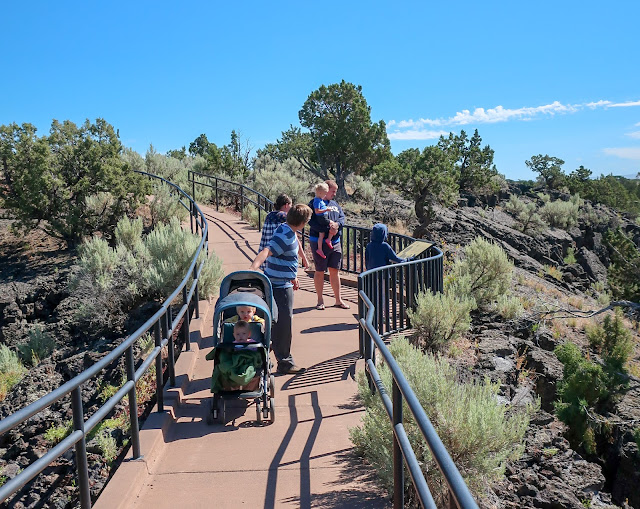 We stopped at this gazebo to gaze at the mountains in the distance: 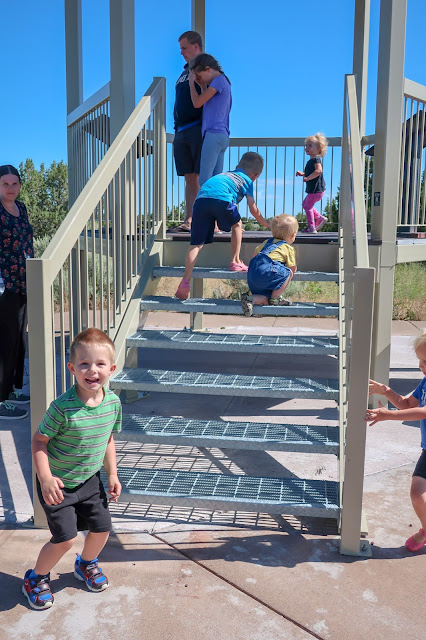 The kids were all bouncing around pretending to be monkeys and lions and, in Zoë's case, chickens: 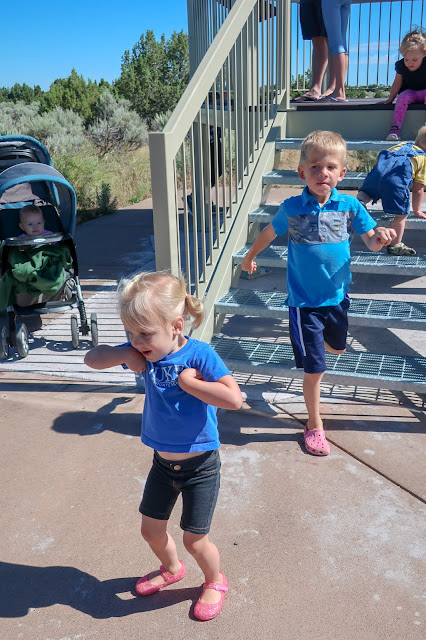 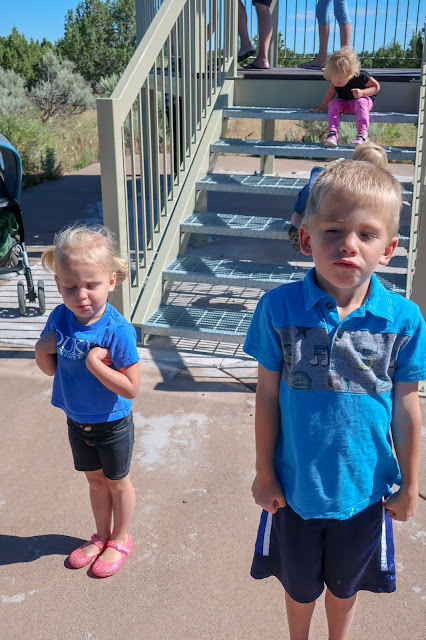 Here's another lovely picture of Rachel: 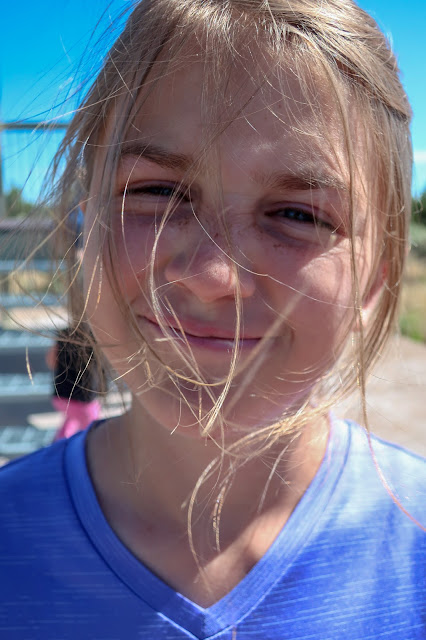 Here's Benjamin pointing out a super-exciting something on the horizon: 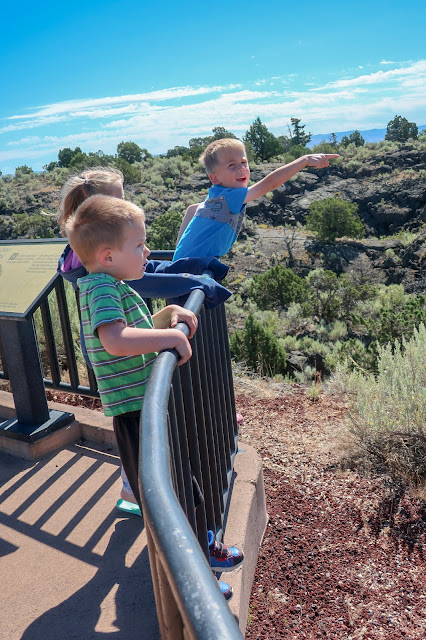 I just love this picture that I snapped of Rachel with Arwyn (those two are pretty fond of each other) even though Arwyn isn't looking at the camera because I caught Zoë mid-somersault in the background (it looks like that landing is going to hurt): 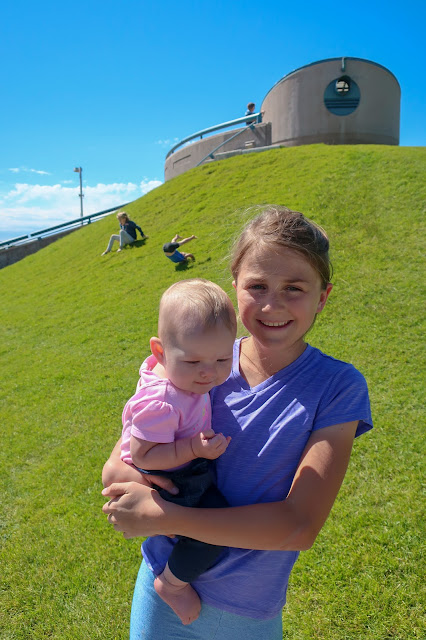 Here's a little of the chaos of nine kids 10 and under on a hillside (they were all over the place): 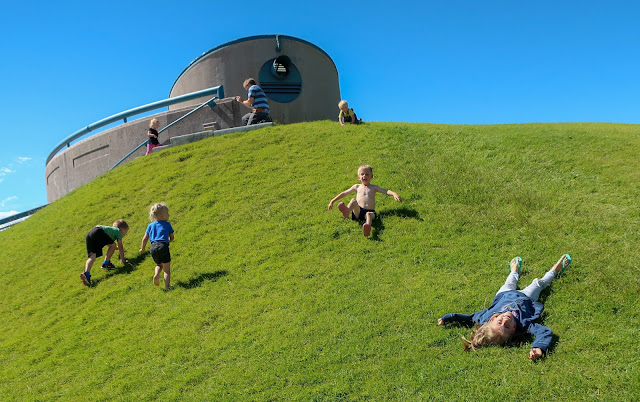 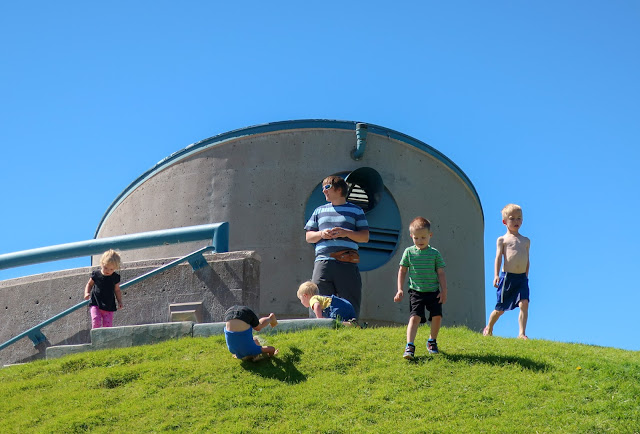 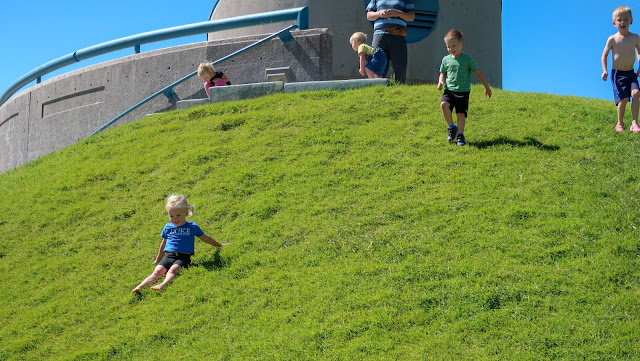 The irony of my attempt at saving his shirt is that while we made it through this entire road trip without a single potty accident or bout of car sickness, Benjamin sprang a nosebleed a few hours after leaving Idaho Falls (so right in the middle of nowhere), and it was a gusher. So his shirt that I had saved from grass stains...was now covered in blood.

We used up our entire stash of random restaurant napkins from the glove box and still his nose kept on bleeding. Of course, he didn't really understand our instructions and it took us a while to find a place to pull over so that we could assist him.

And he was just sitting there, the napkins under his chin, catching the blood as it cascaded out of his nose and waterfalled over his mouth and chin.

It was a horrible, horrible mess in the backseat. But I think we managed to get all the blood stains out of that shirt...

Anyway, here's a dizzy Miriam after rolling down the hill:

Here's Maren sliding down the hill on her belly: 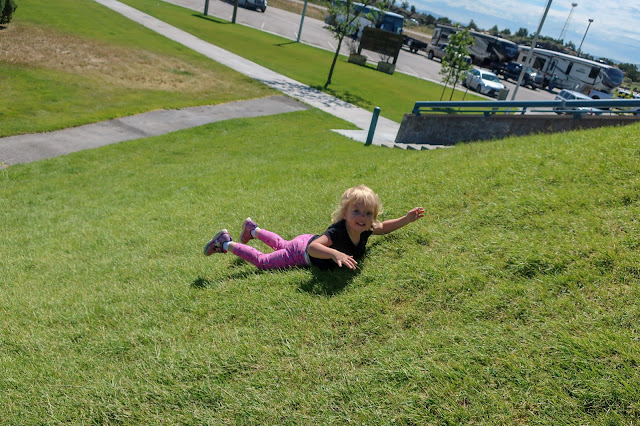 Here's Andrew with Emily and Arwyn (with Rachel kind of photobombing): 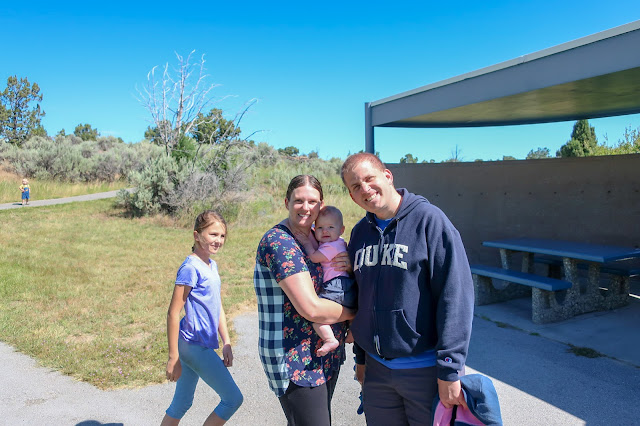 And here's my attempt at a picture of me with Alexander (which Rachel photobombed again):

Here's Arwyn peek-a-booing at me over her mom's shoulder: 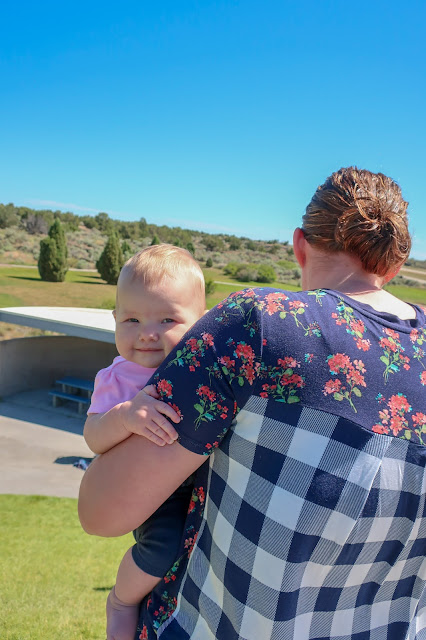 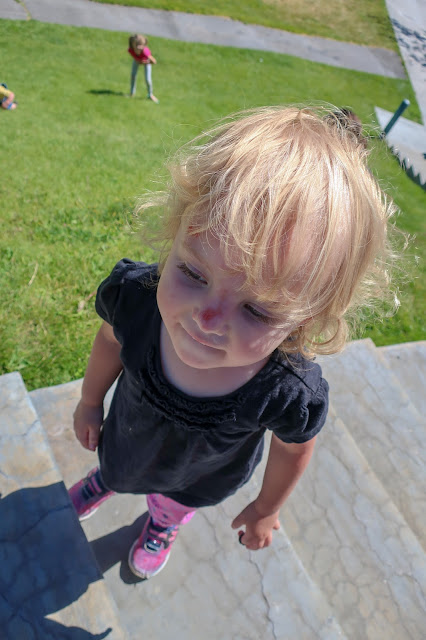 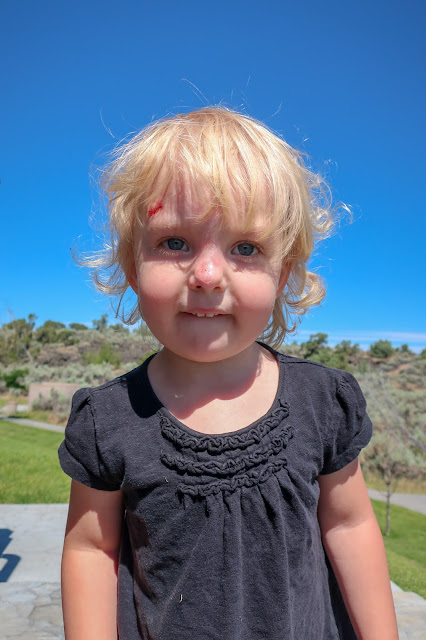 Here are Rachel and Miriam ruining their pants (but they both already had holes in their knees so the pants were already on their way out (leggings don't last long)): 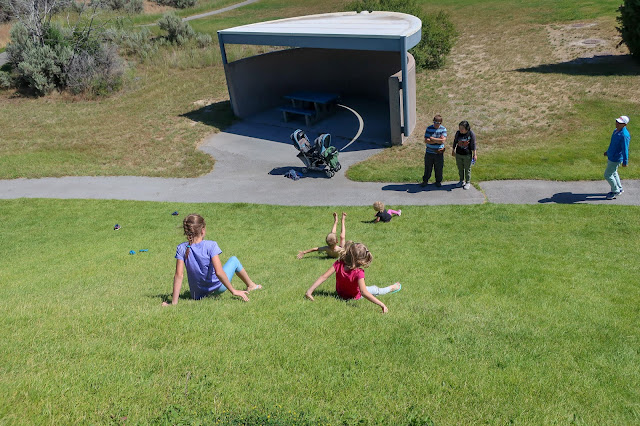 And here are the kids picking some golden currants to munch on: 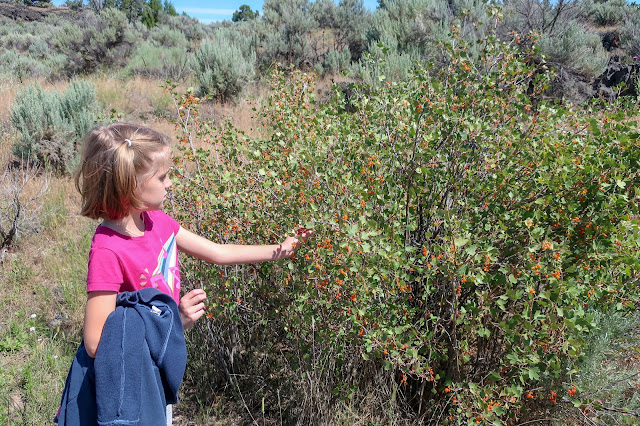 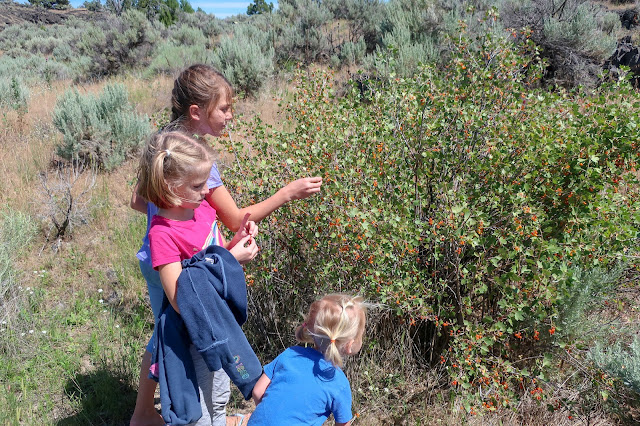 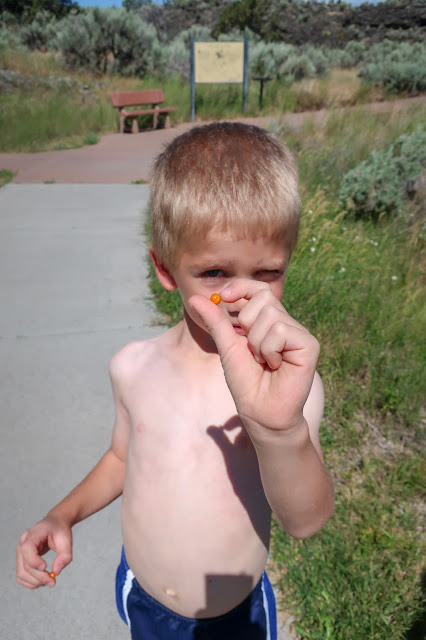 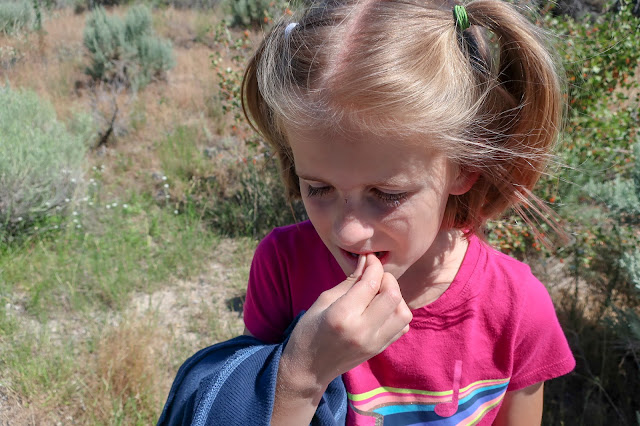 Uncle Morgan assured them that they were a safe berry to pick and eat (he knows a lot about wilderness survival and told us both the common name and the latin name for the berry).

It was great to get to see Emily and Morgan and their kids (as well as getting a little leg stretching before loading back into the van again)!
Posted by Nancy at 5:38 PM