We stopped by the Lewis and Clark Interpretive Center in Great Falls before driving up to Alberta and were immediately greeted by an enormous Newfoundland dog, which is the same breed of dog Captain Lewis purchased to accompany their Discovery Corps on their expedition. This particular dog, I was told, weighed 204 lbs and was as gentle as could be. He seemed to love the attention he got from Benjamin (who loves dogs) and Zoë (who loves to do everything Benjamin does).


He did not however seem comfortable with the attention he got from Alexander. 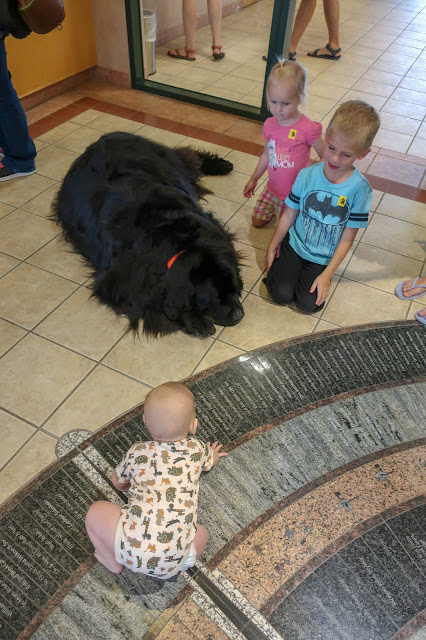 It was about at this point that he leapt up and ran away. Babies are terrifying. 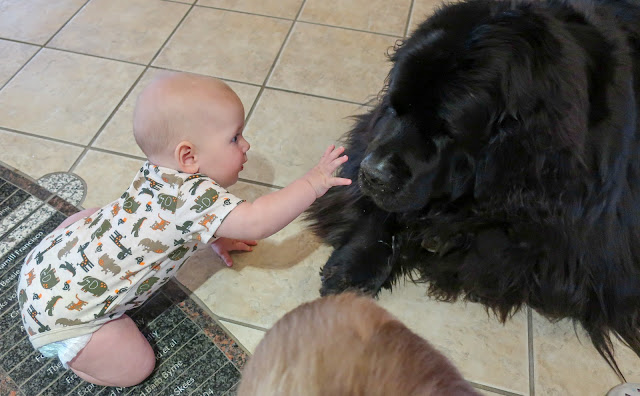 This dog rivaled Alexander in the drool department so I wasn't about to let Alexander actually touch his face (baby drool I can handle but dog drool not so much) but clearly he's a good natured dog to simply jump up and lumber away when he probably could have simply swallowed Alexander whole (because he's just that big). 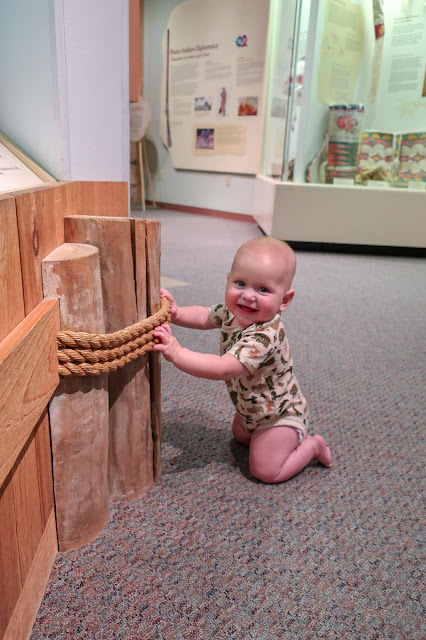 Here are the kids working together to see if they have what it takes to lug a canoe full of equipment upstream: 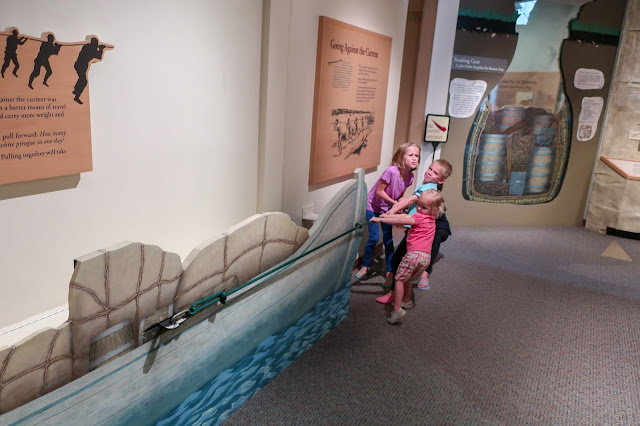 And here they are seeing how it might have felt to carry around Sacagawea's baby, Jean Baptiste Charbonneau (or Pomp, as he was nicknamed on the voyage) in his cradleboard. We couldn't even figure out how to put it on and although the sign said we would have been about fifteen pounds, that board felt significantly heavier than Alexander (who weighs more than fifteen pounds). That might be because we don't usually try to heft Alexander in a cradleboard... 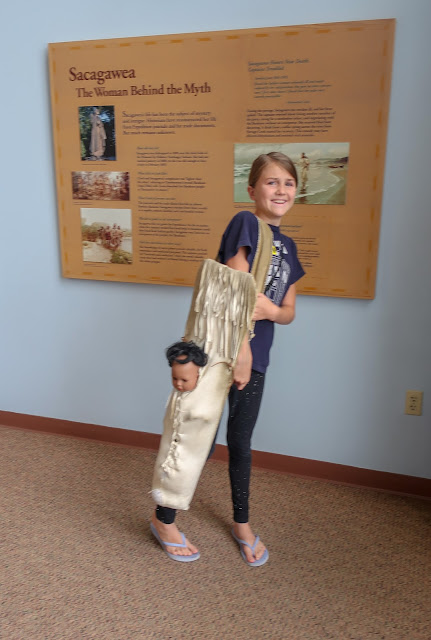 Did you know that Jean Baptiste Charbonneau would grow up to help guide the Mormon Battalion to California? I certainly did not! 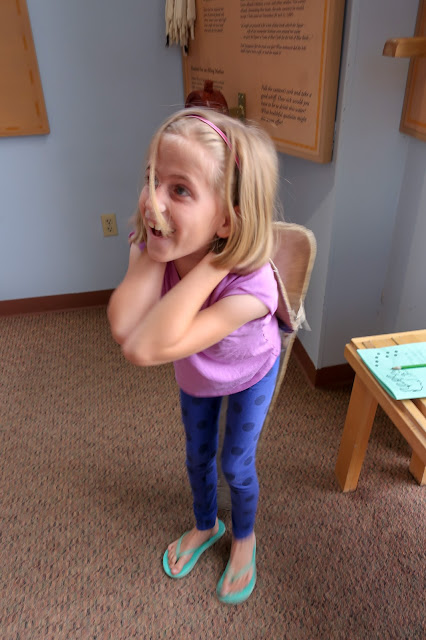 And here are the kids trying to tie sticks to the collapsable iron frame boat Captain Clark was so excited to try out. They carted it around for a year—all the way from West Virginia to Great Falls, Montana—before trying it out. The idea was that it would be lighter to carry than the dug out canoes whenever it came time to lug their boats up some big ol' waterfalls. Unfortunately, the experiment proved to be a disaster. Though the crew secured sticks to the frame and stretched animal hide around it, they couldn't make the seams watertight because they didn't have any (or enough) tar/sap to seal their seams. 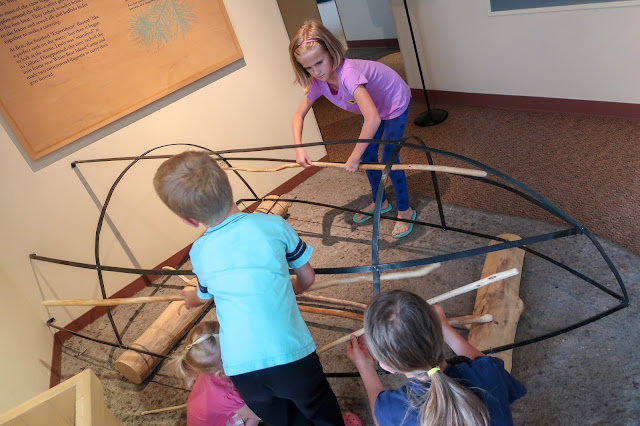 We had trouble just getting the sticks on, though, as Benjamin pointed out, "They probably had more ties than we do!" And that's true because the bucket of ties only had little nubby pieces while the Lewis and Clark expedition had plenty of hide to work with. 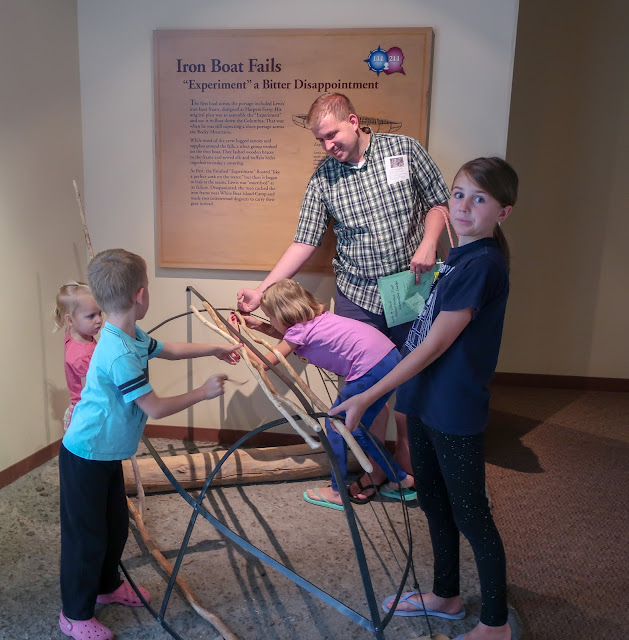 Lewis and Clark documented all sorts of animals and plants unknown to western science as they journeyed across the American continent. Around 170 plants and 130 animals! There was a section filled with furs and skulls of such discoveries, so that the children could try to identify them (which was honestly fairly easy because we've known about these things for some time now). The kids loved playing in the furs and dressing up in the expedition clothes and goofing off with the skulls on display. 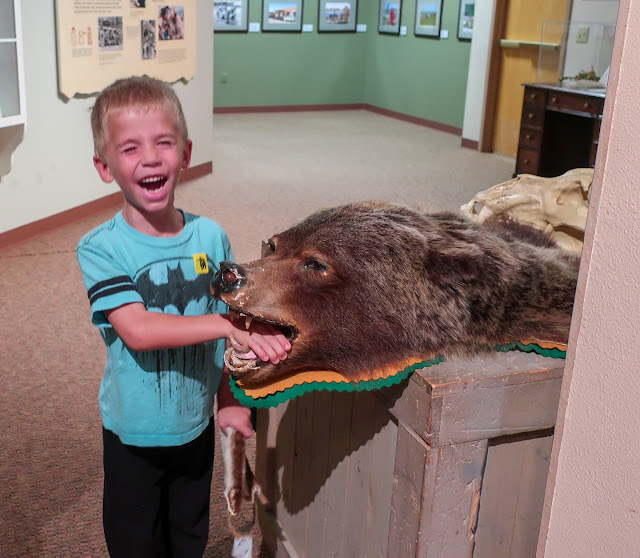 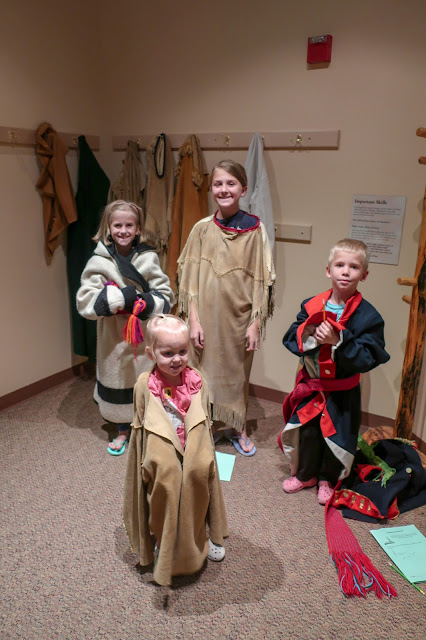 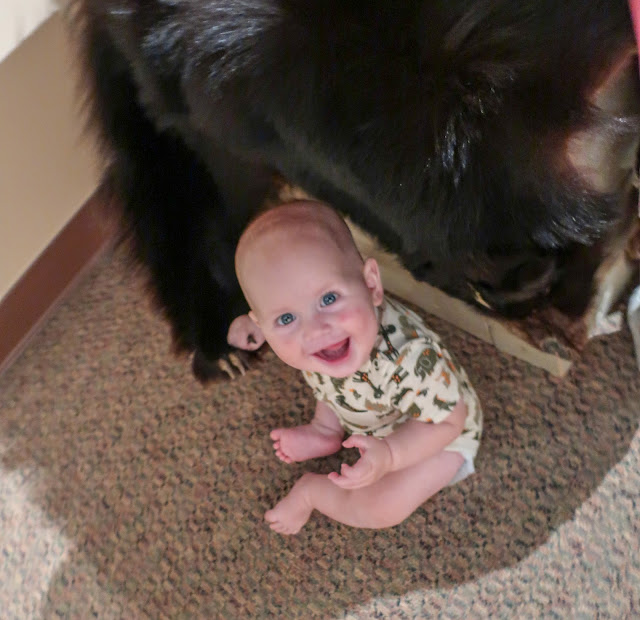 "Are these skulls real?" Benjamin asked. 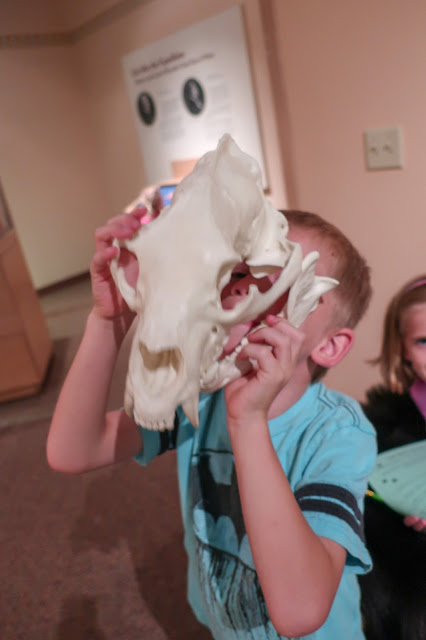 "I don't think so," I told him. "I think they're probably replicas. They seem to be made of plastic or something, not bone." 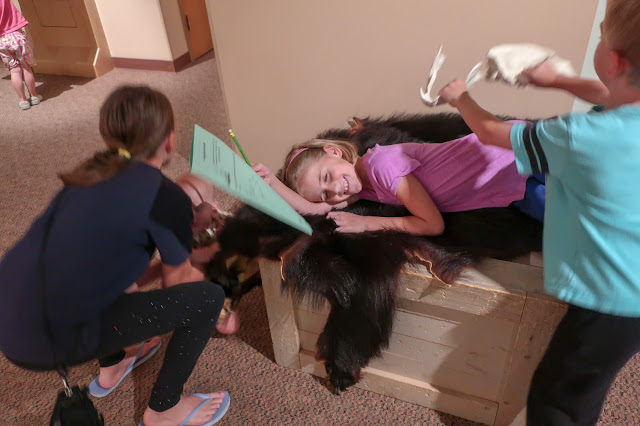 No sooner had I spoken those words than a very defensive and enthusiastic employee, dressed in full Expedition Corps attire, popped around the corner. We'd listened to him discuss the expedition's wardrobe earlier.

"I couldn't help but overhear you telling your children the skulls are fake," he said. "I want to assure you that they're not. They're genuine. All our furs and skulls here are authentic."

I thanked him for his time but the minute he left I asked Benjamin to let me see the skull he was holding and, lo, it was stamped with the company name "Bone Clones." 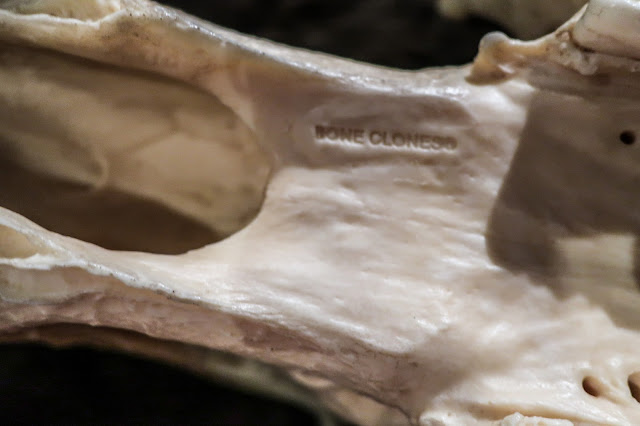 So I'm pretty sure the skulls are replicas (you can buy one for yourself for only $175), but that didn't take away any of the joy the children got out of them. 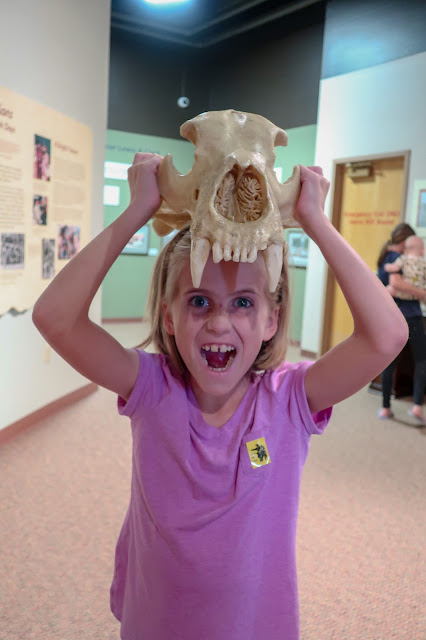 The furs were definitely real. 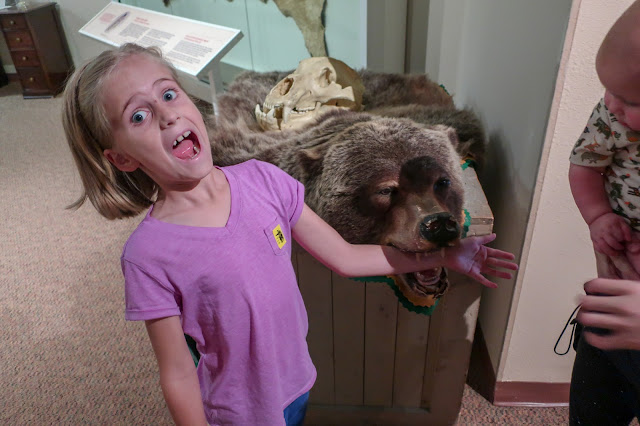 The children enjoyed getting their hands on those as well: 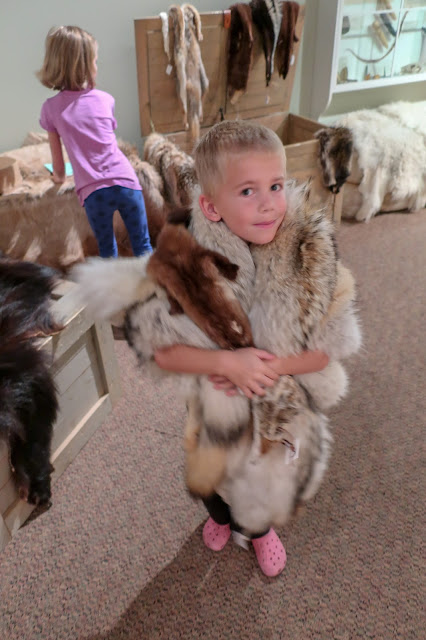 When we'd touched everything that we could possibly have touched (and read quite a bit of what we could have read (though honestly I haven't done a lot of reading at any museum in about a decade because I'm always watching my children instead (but that's alright because that's what Wikipedia exists for—so I can look things up later! (also I read What was the Lewis and Clark Expedition? on the way up so I at least had an elementary knowledge of the expedition going into things))) we decided it was time to hit the road again.

We saw a train in the parking lot, which was exciting for some of us. 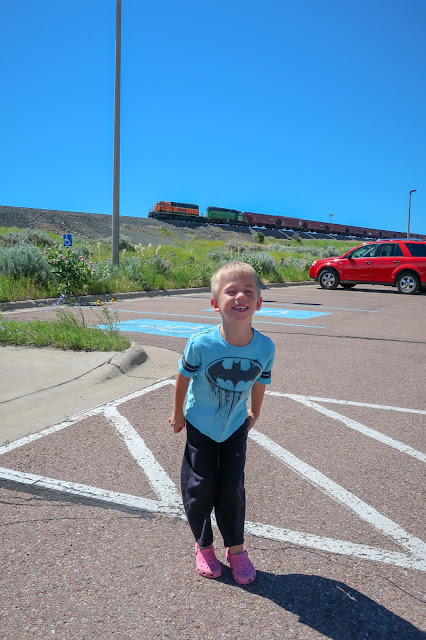 Oh, and we took a picture in front of the Missouri River, which Lewis and Clark travelled down before they ran into the falls right here in Great Falls! 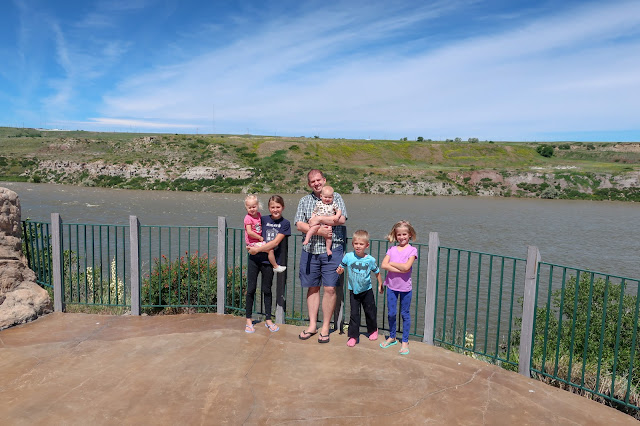 I knew the people working at the center would likely be rather obsessed with Lewis and Clark (and they were) but I hadn't realized that a lot of the patrons at the museum would be as well. One lady approached me in the museum and said, "Excuse me! What a cute family you have!" Then she waved her hand vaguely around in the air and said, "Where did y'all begin?" (she was from North Carolina as she'd later reveal in the conversation).

Unsure quite what she was asking but then deciding she must have been wondering where to start her tour of the museum, I said, "Oh, we just came from the theatre and started making our way around. It's a little loop."

"No, dear," she laughed. "I mean, where did you begin following The Expedition?"

"Oh, ummm..." I stammered. "We're just heading north through Montana, on our way to Canada. We're not really following The Expedition."

"I see," she said, with a hint of disappointment and a dash judgement in her voice before returning to her chipper little self. "Well, we began our journey at Camp Dubois in Illinois and have stopped at every center along the way. We're going all the way to Fort Clatsop! I have to say this is the best center we've visited so far. We went to one in [some place I can't remember] that was a close second, but so far this one takes the cake, so it's lucky you stumbled upon it."

"It's really pretty great," I agreed.

I suppose everyone needs a passion. I just had no idea so many people were passionate about the Lewis and Clark expedition. There were so many retired couples coming through the museum—and they all seemed to have been following The Expedition for quite some time. Perhaps when Andrew and I are retired we'll follow the trail as well (we drove along quite a bit of it anyway when we came home because we came down through Del Bonita and took highway 2 out to Browning and there were a bunch of signs about The Expedition along that road—like Camp Disappointment—and Glacier National Park sounds like a fun drive as well (my cousin Michelle took that route up from Idaho)).

Anyway, here are a few pictures of the kids enjoying a teepee that was outside of the center: 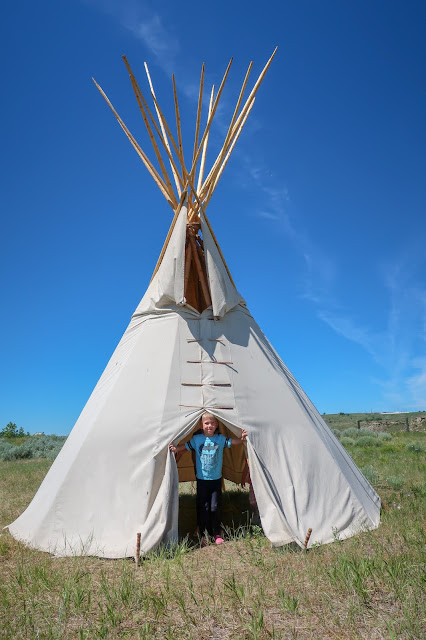 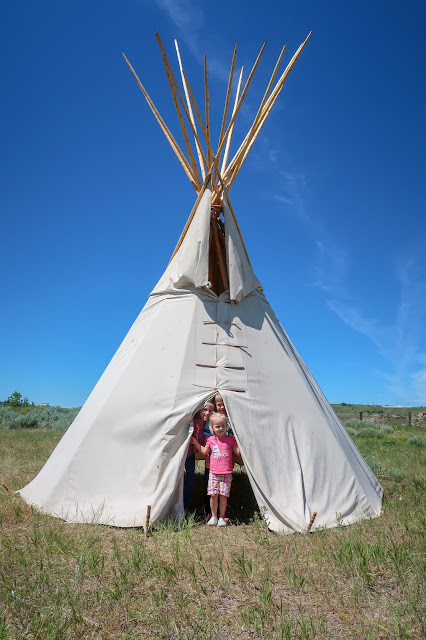 And one of me just to prove that I was there as well: 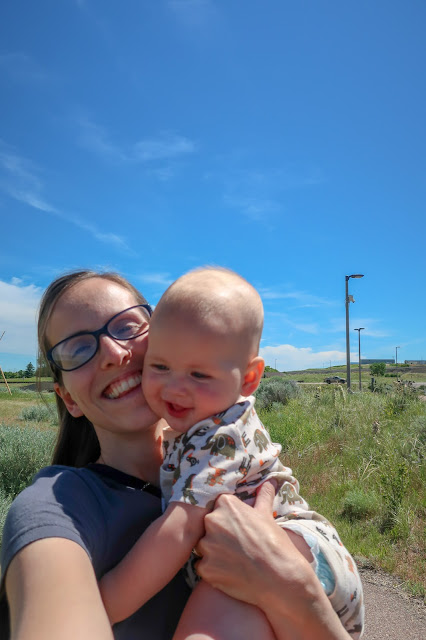