Despite all my protestations, Rachel turned 11 last Friday. We saved the real celebration for the next day (July 21) so that Auntie Emily could attend, since she so rarely gets to come to family gatherings, but we went ahead and opened a few presents on her actual birthday (because sitting around watching people open books is somewhat boring). She mostly got books, which probably comes as no surprise.

When she opened The Confidence Code for Girls, Andrew excitedly blurted out, "It's peer-reviewed!"

Rachel thoughtfully acknowledged this with an, "Oh, awesome!"

And Grandpa just about died laughing over how nerdy our family is. But that's okay. Rachel has been going through the book, doing the exercises in a little notebook (and I have noticed that she's been more open to taking risks, so that's nice). 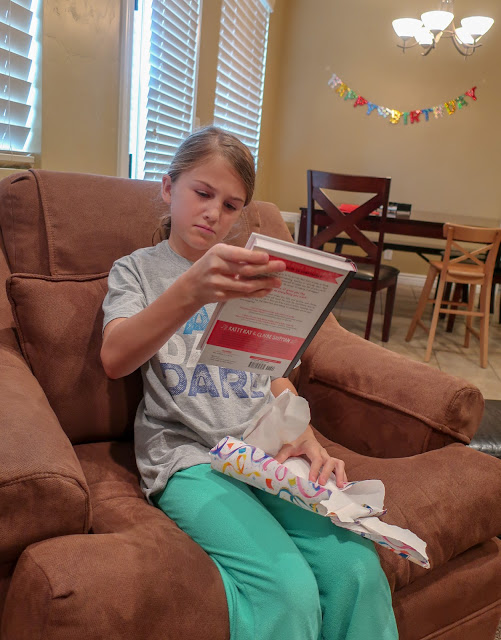 She was more excited, however, to open the Harry Potter "movie magic" books. 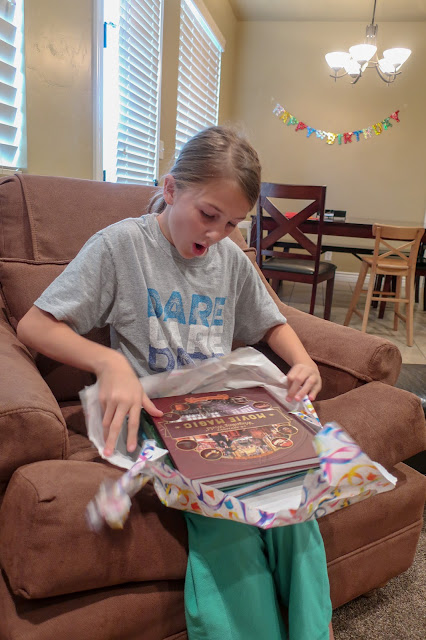 We also gave her a cute turquoise dress that she picked out at the store (sometimes it's best to not be surprised by presents). Oh, and we also did our very best to annoy her on her birthday/birthday eve by announcing everything as either her "last [whatever] as a ten-year-old" or her "first [whatever] as an eleven-year-old." We got some pretty epic eye-rolls from her (so obviously we're parenting correctly).

It was rather hot when everyone came over for cake, but I didn't want to have eleven children trying to eat cake inside the house so I insisted that we hold the party outside. We set up sun shades and chairs and I even made Andrew drag out some fans to try to cool things off a bit. It was so hot! People were good sports about it, even though things were rather sweltery. 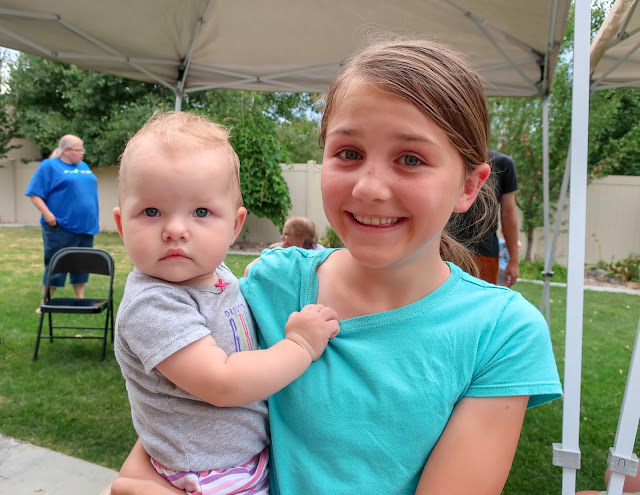 She got a couple of BYU shirts from my family, along with a Doctor Who origami book: 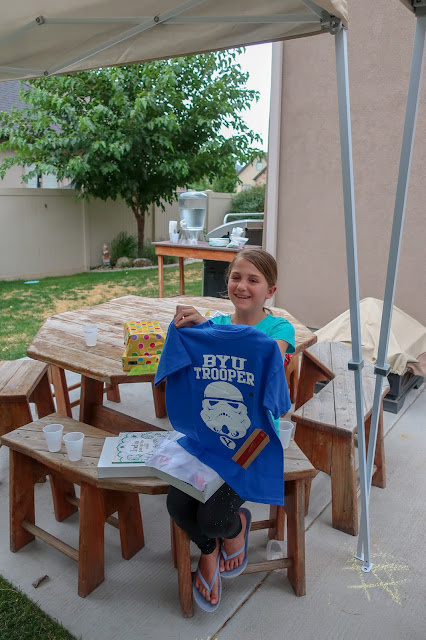 Katharine, Kayl, and Todd gave her a new colouring set: 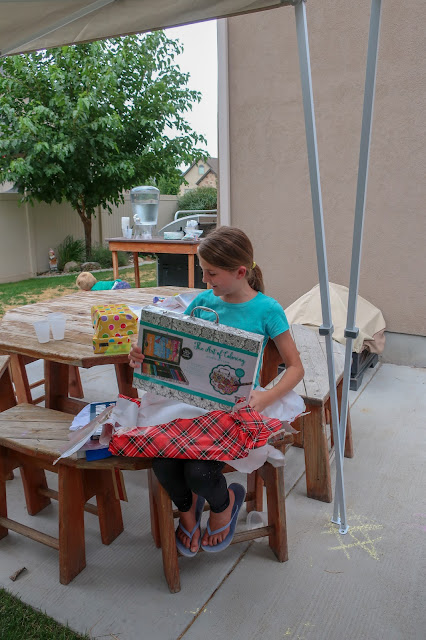 Grandma and Grandpa gave her a bunch of books (including several books about WWII which Rachel picked out months ago when she went to a scholastic warehouse sale with Grandma) and a Star Wars Lego set: 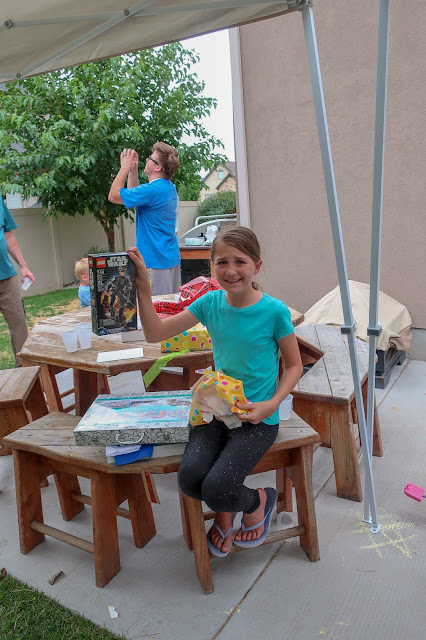 There was a lot of baby holding to do, which everyone enjoyed. Here I am doing double duty: 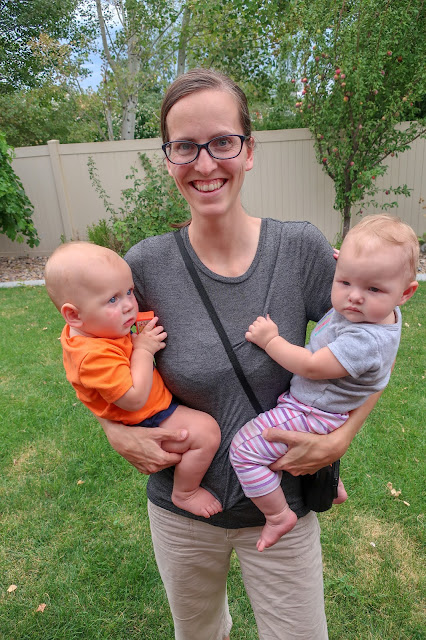 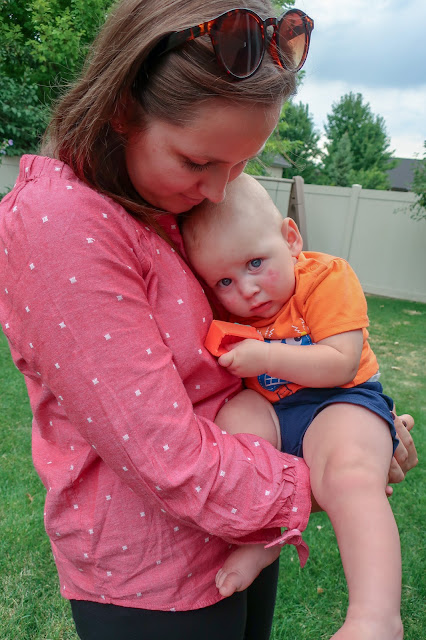 Things started rather rapidly cooling off when some storm clouds rolled in. I don't know where those came from because I'd checked the forecast during dinner, but there they were and now the forecast was telling us that heavy rains would be starting in the next half hour. (It's totally possible I checked the forecast for the wrong city entirely; sometimes I do that).

Here's Uncle Patrick keeping a hold on the sunshades while chatting with Uncle Jacob: We quickly brought the cake out so that we could eat and clean up before getting rained on. Rachel asked for a Grecian-inspired cake (having recently read the first book in the Percy Jackson series). More specifically she requested the Parthenon (because she's partial to Athena) but I didn't want to even attempt replicating the Parthenon so we went with a general Greek-ish theme. 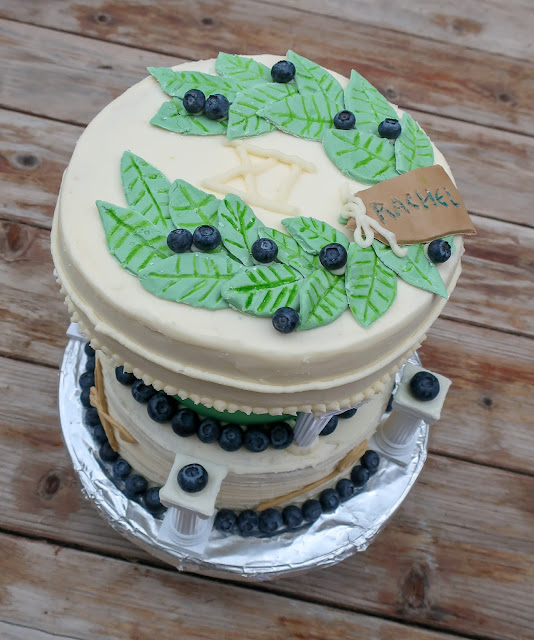 There's a bow and arrow for Artemis: 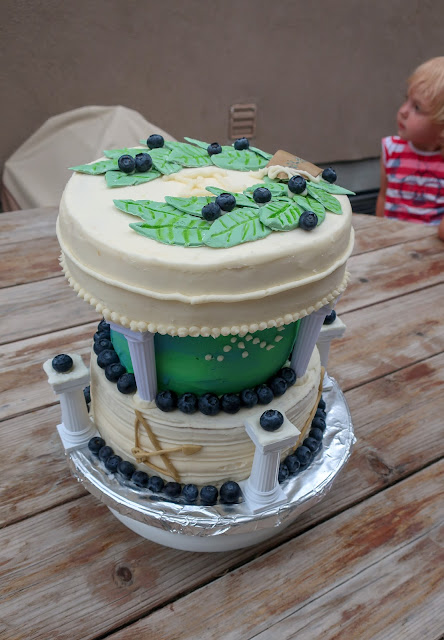 A lightning bolt for Zeus: 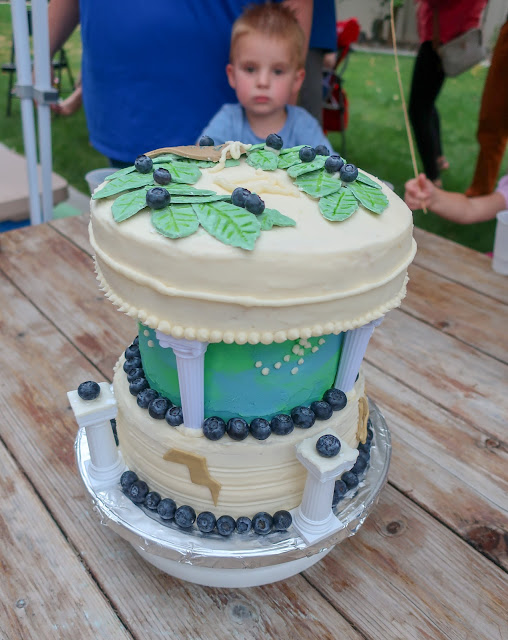 An owl for Athena: 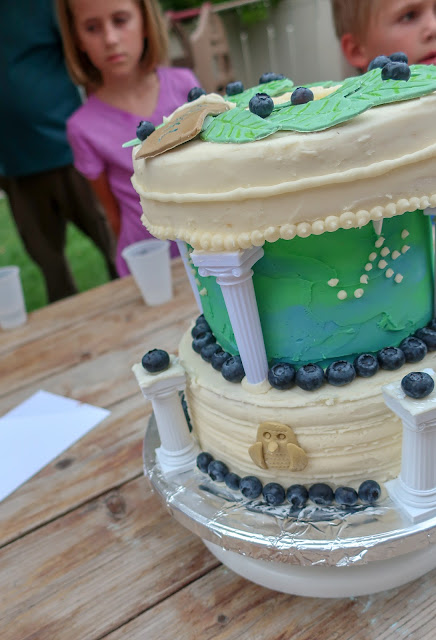 And a trident for Poseidon: 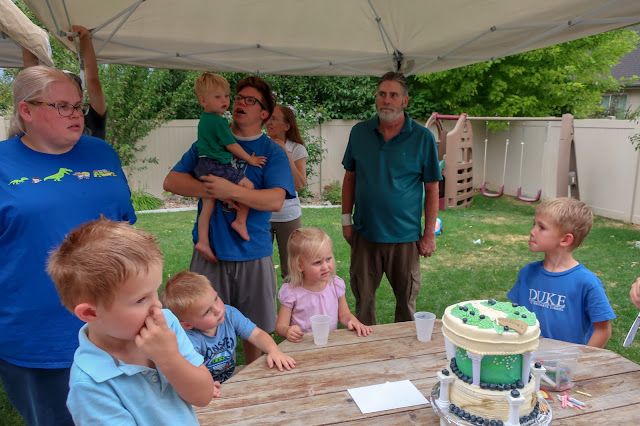 We had no end of trouble trying to light the candles (it was far too windy for that): 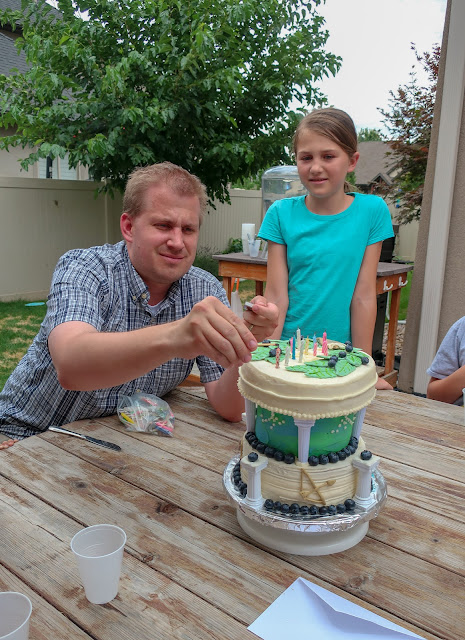 Andrew attempted to light the candles several times, but only gave up after he lost his grip on a match and it tumbled onto the table right in front of him (which was rather hilarious to witness (once we were sure the table wasn't going to go up in flames, that is)): 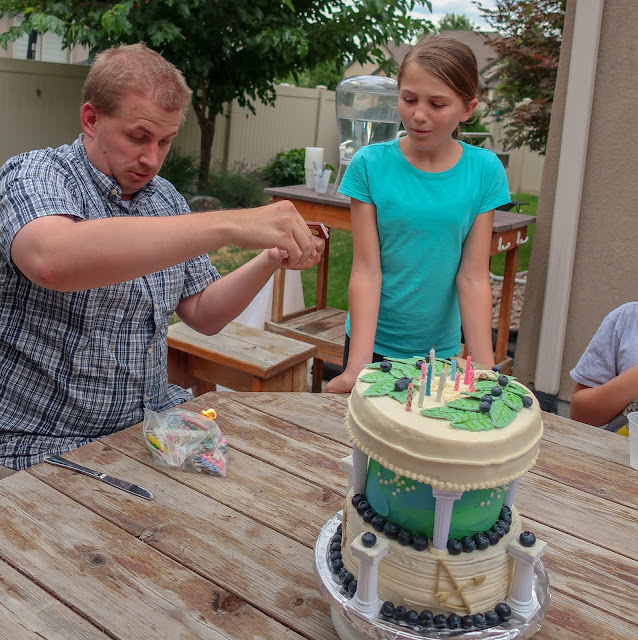 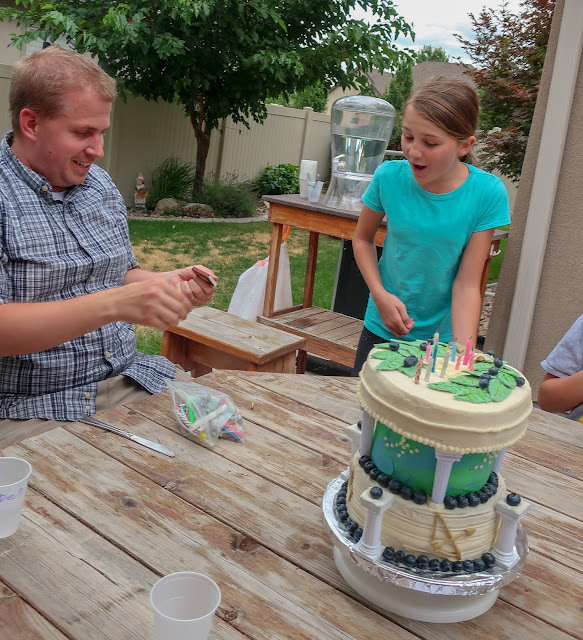 Instead we had Rachel blow out a single match after we'd sung to her: 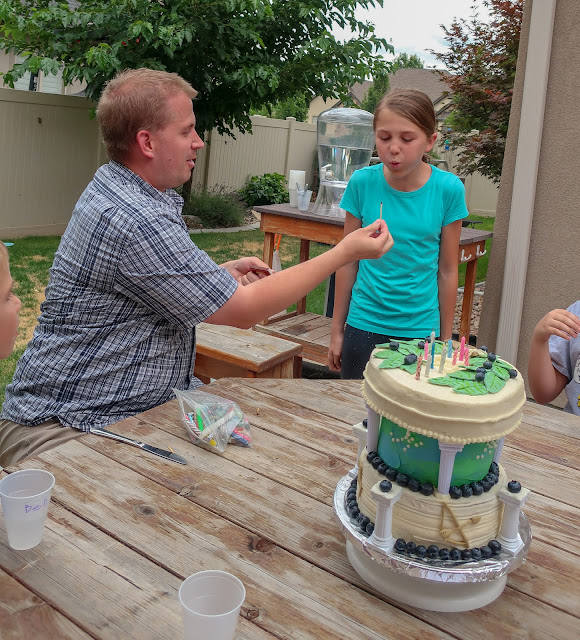 And here's a sampling of the chaos that feeding twenty-three people is: 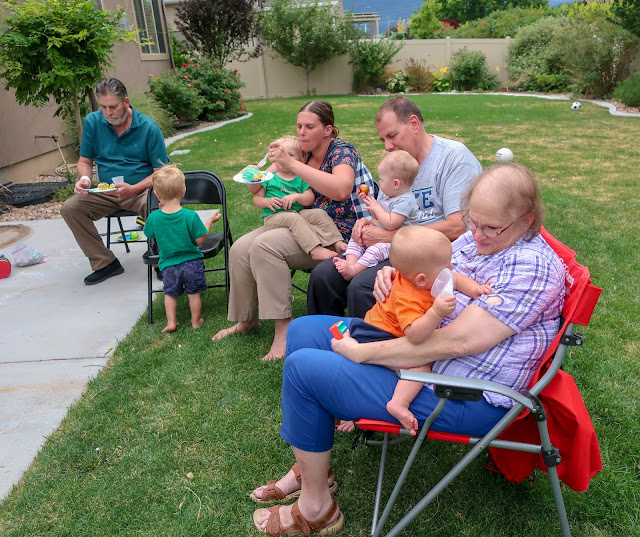 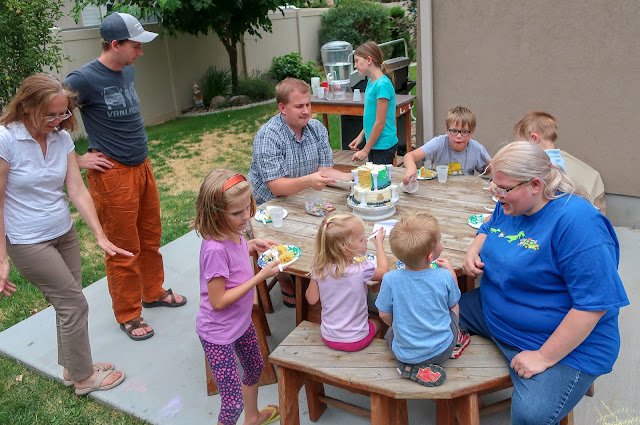 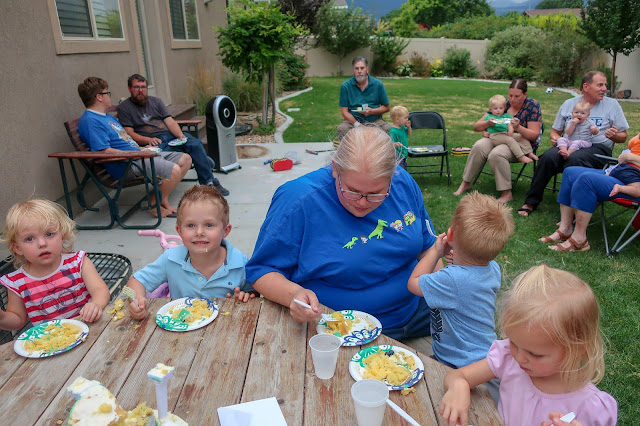 Even though it was at first very hot and later incredibly windy, I was glad we'd chosen to feed all those people outside because kids + cake = epic mess. It was nice to have so many people around to help clean up, too! My mom and Patrick helped get the sun shades put away and everyone helped clean up the yard toys.

Poor Zoë was particularly concerned about the approaching storm. She called Auntie Josie over specifically to tell her that "there's a strom [sic] coming!" 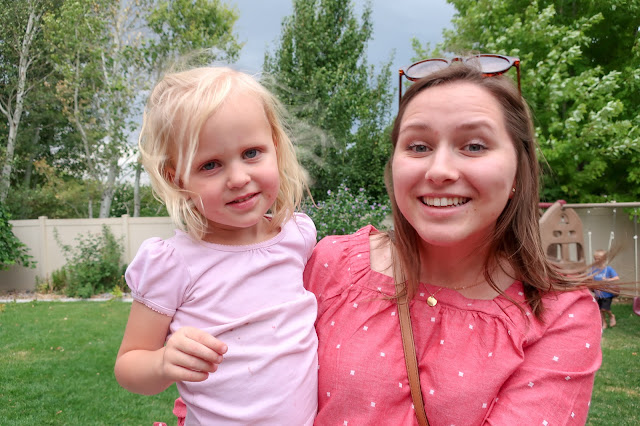 Later she shrieked, "Oh, no! The wind's picking up!" 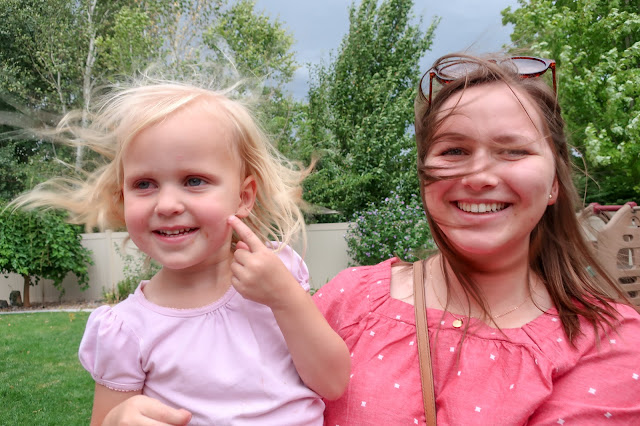 I don't quite know what was going on in this picture (I must have caught her mid-sneeze or mid-word or something), but it was too hilarious not to share: 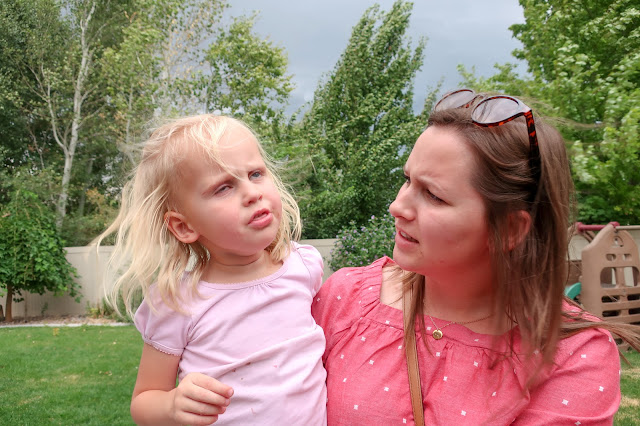 It started pouring soon after we'd all retreated inside. Things were a little bit rushed toward the end there, but we were all happy to at least stay dry.

And here, randomly, is a list of guests that I typed out to count how many people were present. Who knows...it might come in handy some day...
Posted by Nancy at 12:31 AM