I wasn't 100% sure I was going to add a trip out to Grassy to our itinerary until Patrick told me that Michelle was going to get there on Sunday. He and Josie had gone up to the farm early so that they could help with the bees (my cousins raised bees over the winter this year so they could set them out to pollinate their crops—so they had to assemble all these little bee house-tent things) and everything seemed really busy so I didn't want to impose or anything. But Michelle was my tipping point. We had to go the farm now (and I was very happy about that because the farm always feels like home). 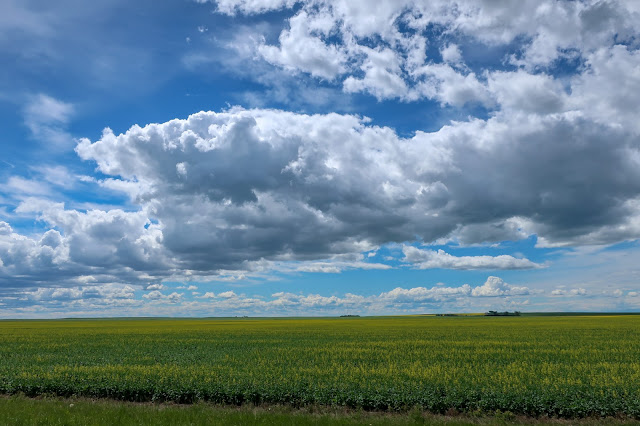 Plus, as my mom pointed out, visiting on a Sunday would mean that things wouldn't be too crazy around the farm because the sabbath is, gratefully, a day of rest. And, she baited us, there was a surprise waiting in the backyard. My cousin Craig and Uncle LeRon had spent Saturday building a gigantic swing set and my kids were the first ones to test it out. It's so tall that the swings went blissfully high. The kids loved it! 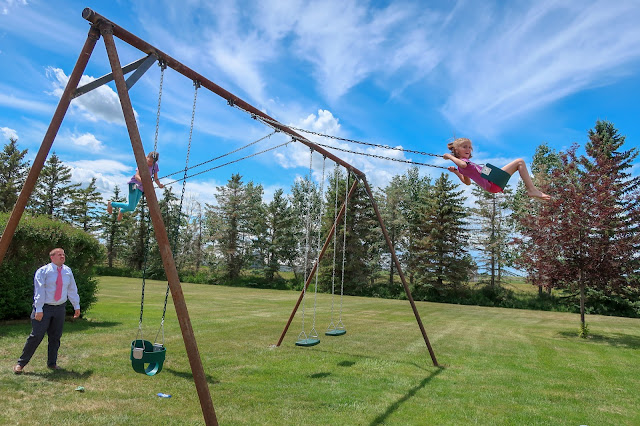 My Auntie Colleen had always wanted a big swing set, so really Uncle LeRon built it for her (and their grandkids), but my kids certainly enjoyed it as well. 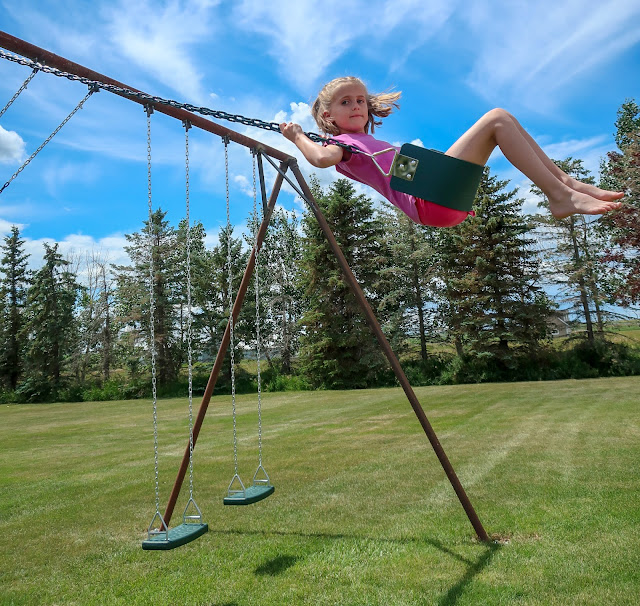 I visited with Eric, Michael, and Craig outside under the awning while the kids (and Andrew played). We had a delicious dinner (Grandma Torrie's sloppy joe recipe) and then relaxed inside while the kids played outside again. 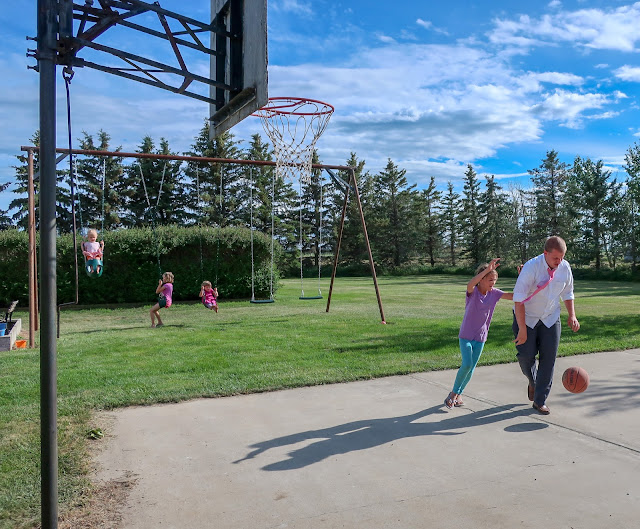 Some of us relaxed harder than others (don't worry; I was sitting beside them on the couch the whole time): 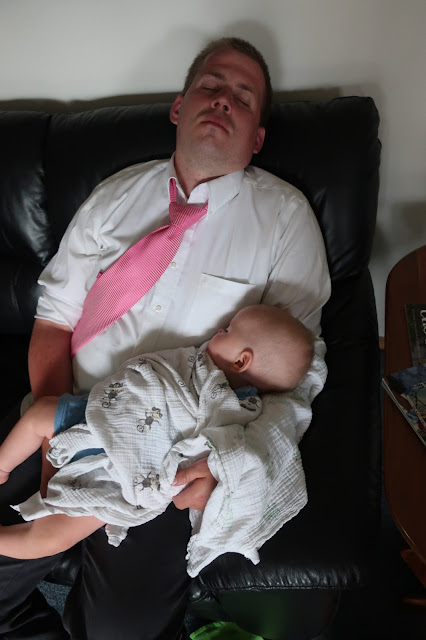 Michelle showed up (a little later than we'd been anticipating) and we were so excited to introduce our kids to each other.

Here's Zoë and Leon playing in the sandbox together: 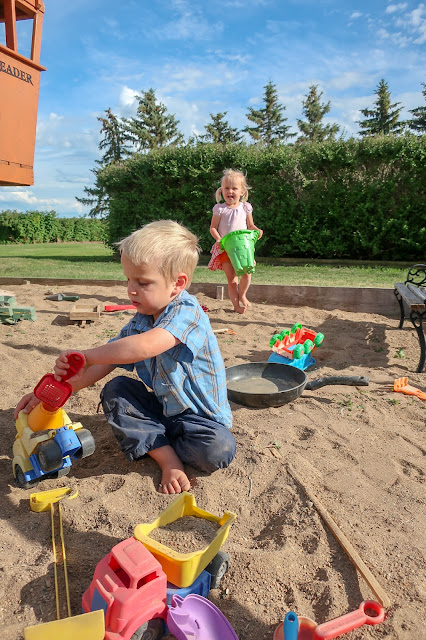 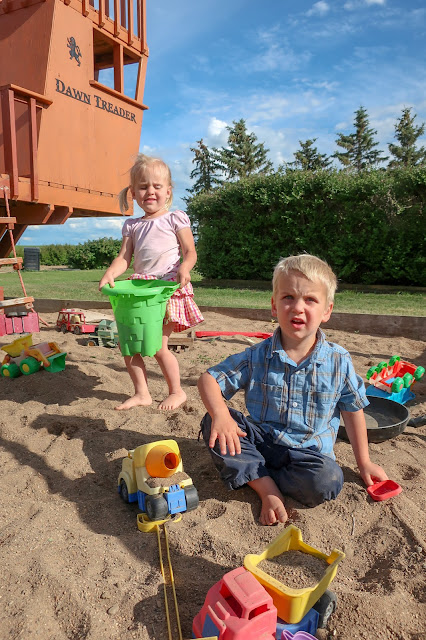 Here's Benjamin, Miriam, Rachael, and Alice on the swings: 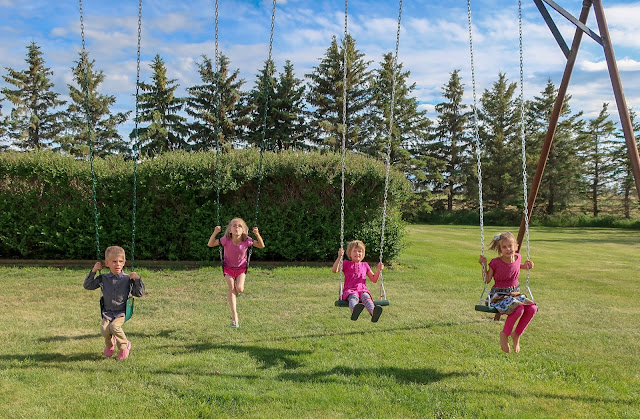 Rachael is not a typo of Rachel. Michelle named her second daughter Rachael.

She wrote to me to ask me if I'd mind and I told her it was perfectly fine because they'd be second-cousins living hours and hours away from each other. So really it was kind of fun that they had the same name!

But knowing that she already had a Rachael turned me off the name Matthew, which has always been one of my favourite boy names. First of all, I kind of named my nephew Matthew (though his parents might disagree). They were still arguing over names in the delivery room though and his father was pulling hard for Ozzy.

I was like, "You can't name a baby Ozzy! How about Matthew? I love the name Matthew!"

I'm sure their decision wasn't immediate and can't say how much sway I really had in their decision but they did end up naming him Matthew (it's a good name).

Fourteen-year-old me didn't realize that you shouldn't waste your favourite name on your nephews!

I mean, I love Matthew. He's great. But, like, now I couldn't really put the name on my list again.

Or could I? Matthew, after all, was twelve by the time I was expecting Benjamin. That's a pretty big spread. It's not like it would ever get confusing at family gatherings...

But then I remembered that Michelle had named her oldest son Matthew.

It would be odd if we had two kids named the same thing, right? So, no Matthew for me.

But Benjamin. That's a good name.

Andrew really wanted Samuel (which is also a good name) but I pushed for Benjamin (and, like, literally pushed for Benjamin as well, so I got my name, which is just as well because now Andrew doesn't even remember that he was pushing for Samuel (though Andrew was only figuratively pushing for Samuel, not literally) so if you can't even remember that you wanted a name was it even a favourite? I don't think so). I wanted a Benjamin. If I couldn't have a Matthew, I wanted a Benjamin.

So, a few kids down the road and what does Michelle name her baby boy? Benjamin.

Anyway, here's my Benjamin up in the crow's nest of the Dawn Treader with Leon below him: 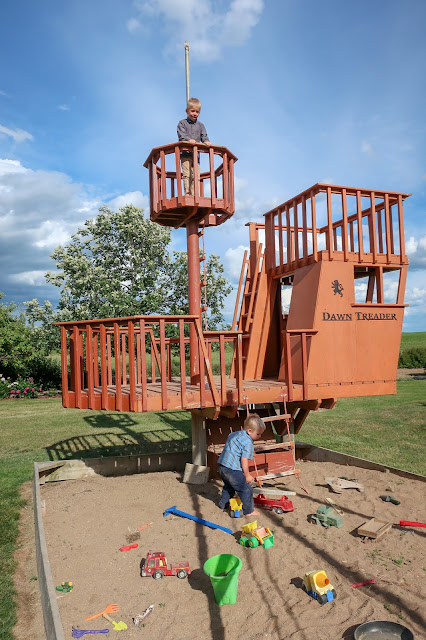 Here are Zoë, Miriam, and Rachael swinging some more: 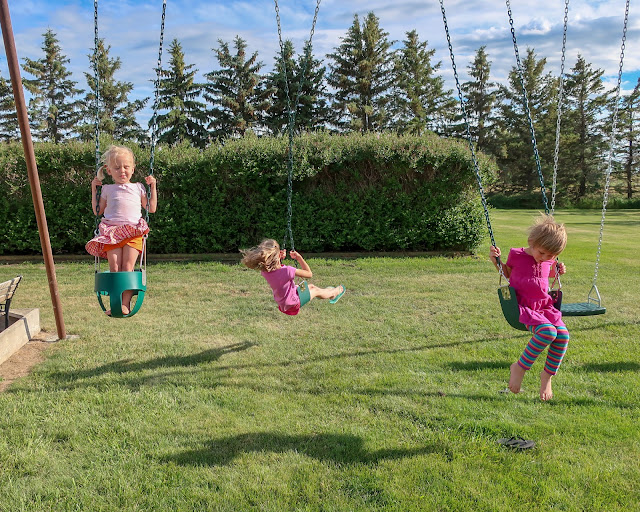 Here's Benjamin up in the lighthouse slide: 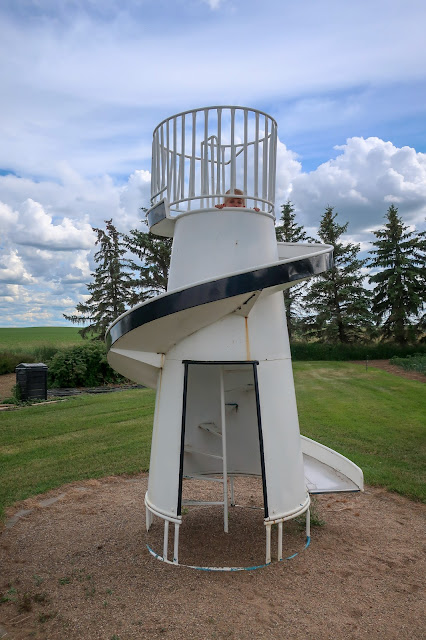 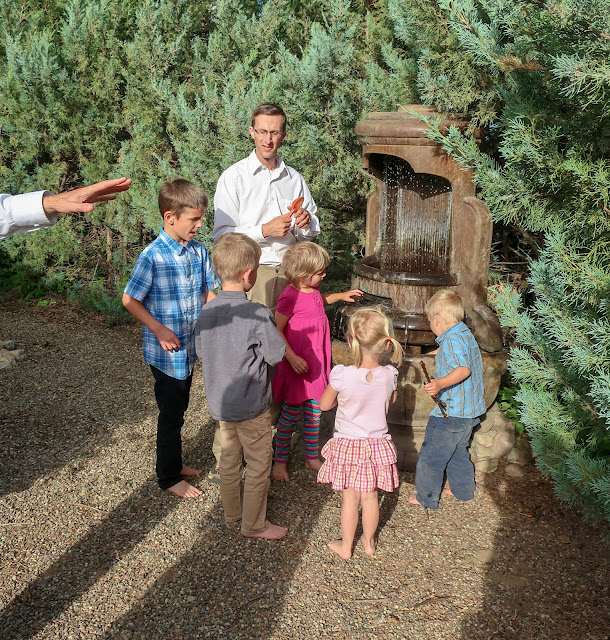 Here are the little cousins in all their glory:
And here's the same thing, but without Rachael's watergun and with a bit of an optical illusion. Do you see the fountain on the lefthand side of the frame? What's in front—the camera lens or the fountain? Trippy, right? 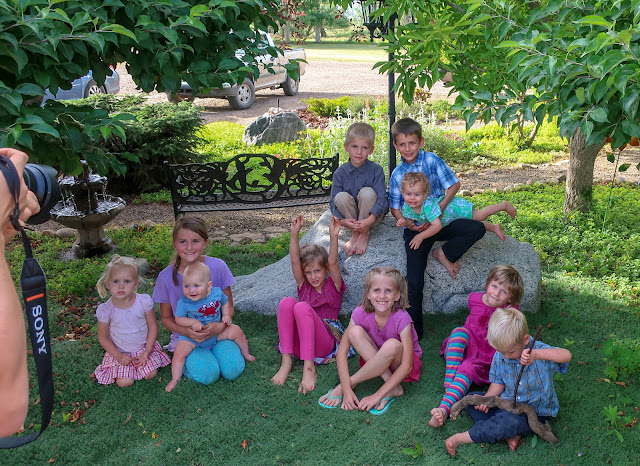 I was originally going to crop out Eric's arm/camera but then I notice that I somehow got them perfectly lined up, so then I had to keep it.

My aunt and uncle have renovated their house quite a bit since I've last been there. They added on a music room and a larger living room. It all looks great!

We also walked over to what used to be Grandma Torrie's house (where Michael and Craig are living). They've been renovating that space as well. It's strange to see these familiar spaces looking less familiar.

The walk between the two houses, however (aside from the raspberry bushes and rhubarb plants, which have long-since stopped producing and were thus pulled up), was just as familiar as ever, only this time instead of a little Michelle and a little Nancy walking down the road it was a little Miriam and a little Alice: 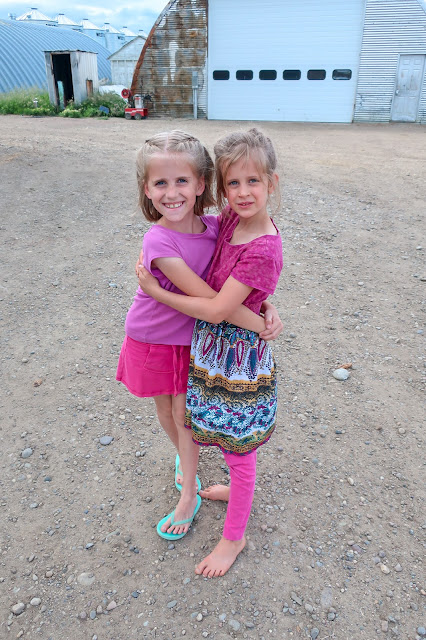 This picture of those two girls carrying their baby brothers is my favourite shot from the whole day: 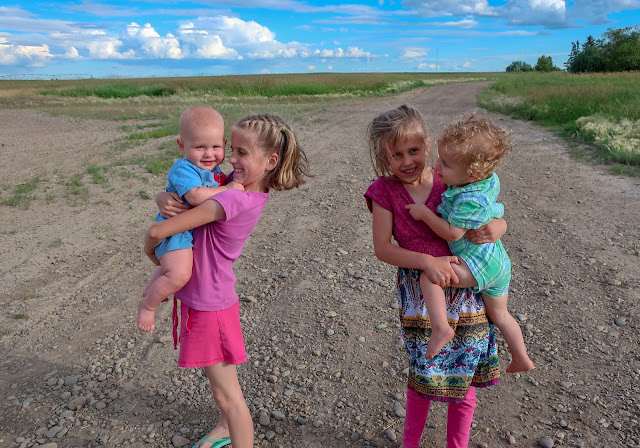 After saying goodbye to their newfound cousins (which was entirely unfair because they wanted to play more), we tried to stop by Ellen's farm. Unfortunately, they weren't home so instead we headed back to Raymond, soaking in the glorious sight of the prairies as we went. 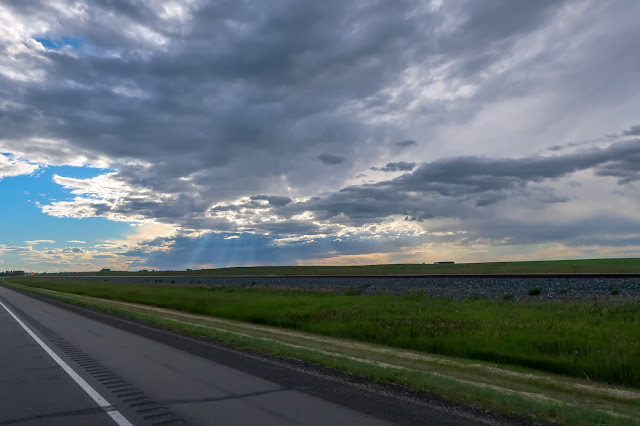 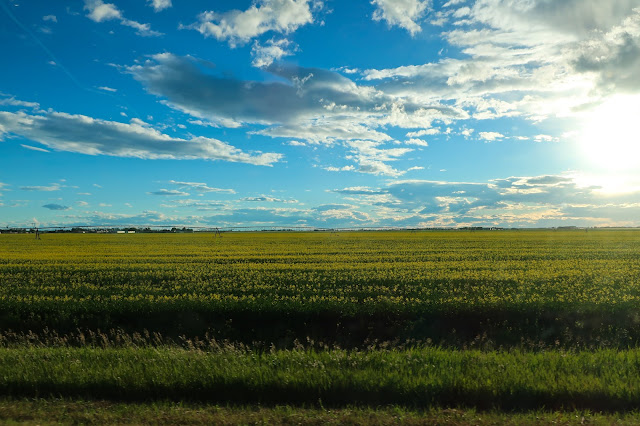